Out of the blue, Granblue Fantasy: Versus is an incredible looking 2.5d fighting game

Whilst I’m not overly familiar with Arc System Works games in general, Granblue Fantasy: Versus recently caught my eye thanks to its incredible visuals and silky smooth animation. At first I thought I might be stepping into a fairly average fighting game, but what I came away with was enough interest in this universe to want to see more — in the form of both past and future titles.

First of all, let me just say that I was — perhaps foolishly — expecting a classic 1 vs 1 fighting game, and indeed, that is one way you can play Granblue Fantasy: Versus. However, where I actually ended up spending an unexpected amount of my time was in the JRPG-lite come scrolling beat-em-up that makes up the campaign mode within the game. 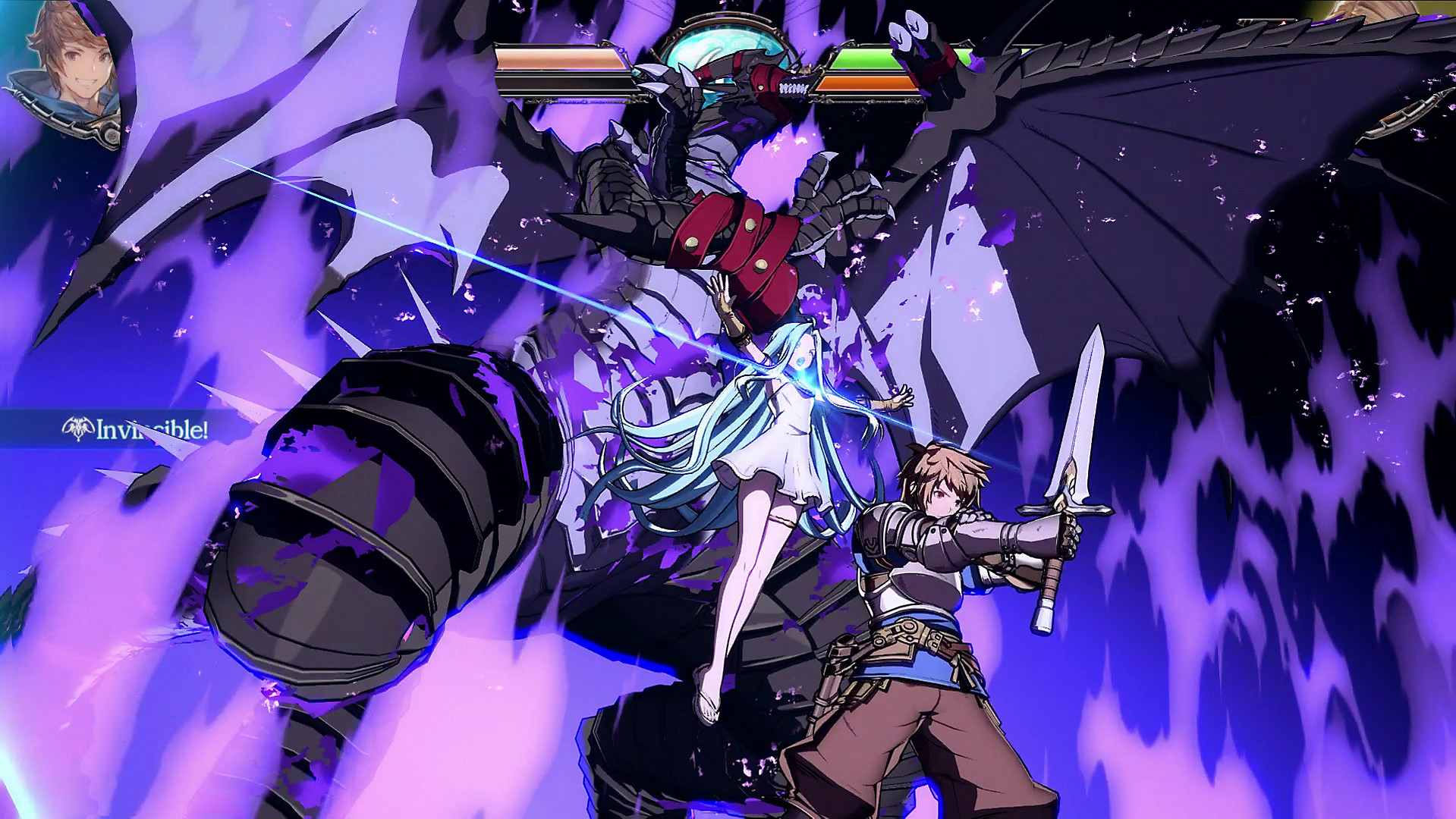 With a starting roster of eleven characters ranging from the titular and well balanced Gran to the unlockable (and quite challenging) Beelzebub, as well as around six or seven characters being drip-fed across two seasons of DLC, there’s just as much character variety as there is in the number of modes.

Granblue Fantasy: Versus is very different to other fighting games that I’ve played, for several major reasons. First of all is the fundamental way in which the characters are controlled, which delivers a near perfect hybrid of accessibility to new players and reward for those who take the time to become experts in their chosen character(s).

This works by offering the players a relatively standard four button fighting system that includes light, moderate and heavy attacks, with the introduction of a special move button that can be modified by pushing in different directions. This allows players to rapidly learn a character’s strengths and weaknesses and even to become fairly good with those characters by using the pre-programmed two to four hit combos assigned to each button, and the easy to pull-off specials. 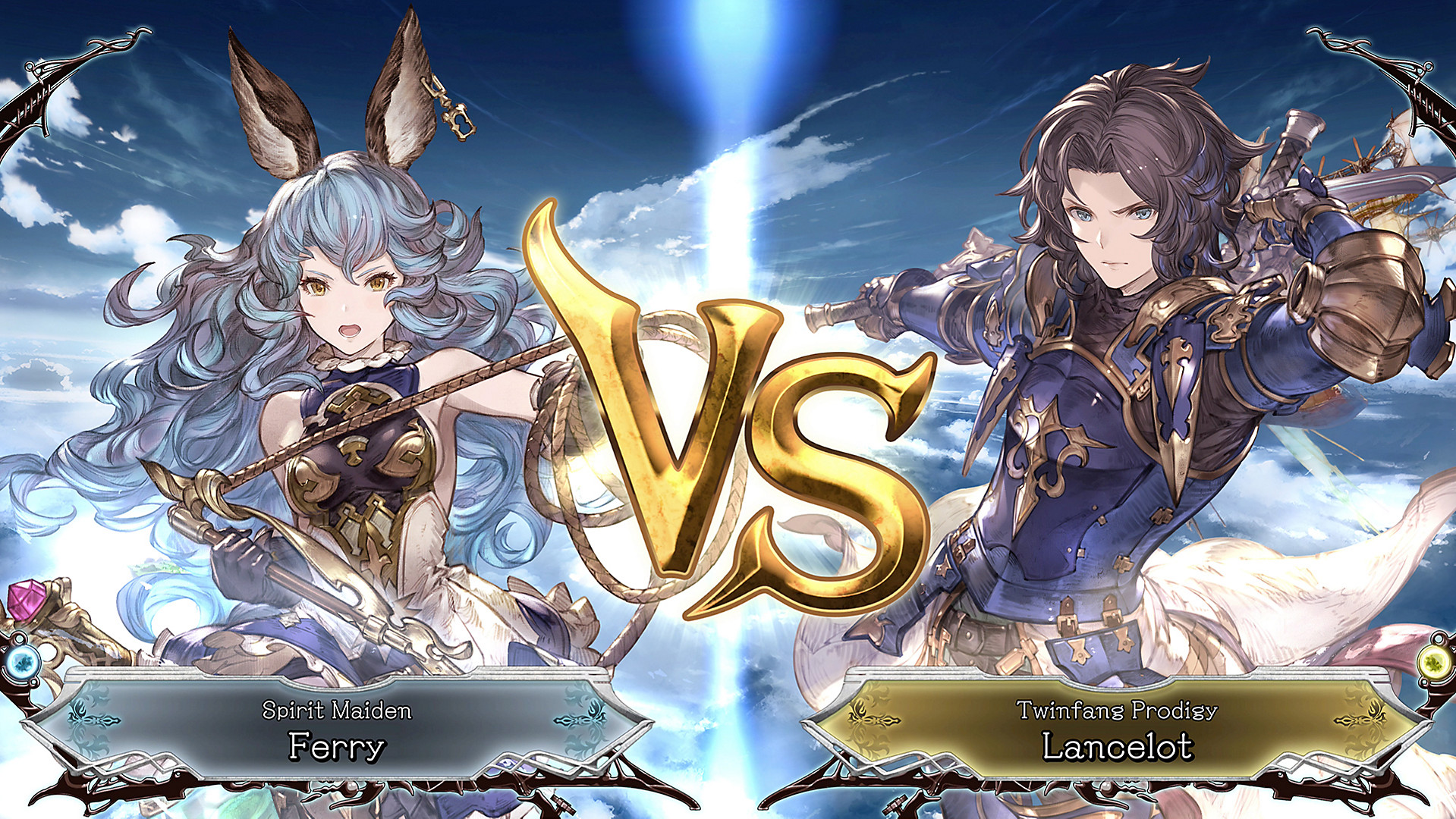 There’s also a block button that basically deals with defending incoming attacks of different kinds and at multiple heights, but this block can be bypassed, which brings me to the downside of both the blocking and special systems, and to Granblue Fantasy: Versus’ real strength. In short, by using the “auto” specials, the player will put them into a fairly lengthy cooldown which essentially disables them for a while. Those same moves can also be pulled off using traditional motions (like the Shoryuken, for example) which can result in more damage, more range and a lower cooldown depending on the attack.

This approach results in a couple of things to consider. Firstly, it does indeed allow new players to reach a level of competence very quickly, and to test different archetypes to find their comfort zone. If using traditional inputs however, the attack will likely be more powerful and will cooldown sooner, but skilled players will notice visual tells such as characters backing off or crouching for two seconds, for example.

The best balance when playing online then, is probably to use both methods and adapt as you play — perhaps using the traditional moves when it makes sense to do so, and reverting to the presets when under pressure or if a move is trickier to pull off. The lack of many juggle moves or huge combos also ensures Granblue Fantasy: Versus remains newbie-friendly, 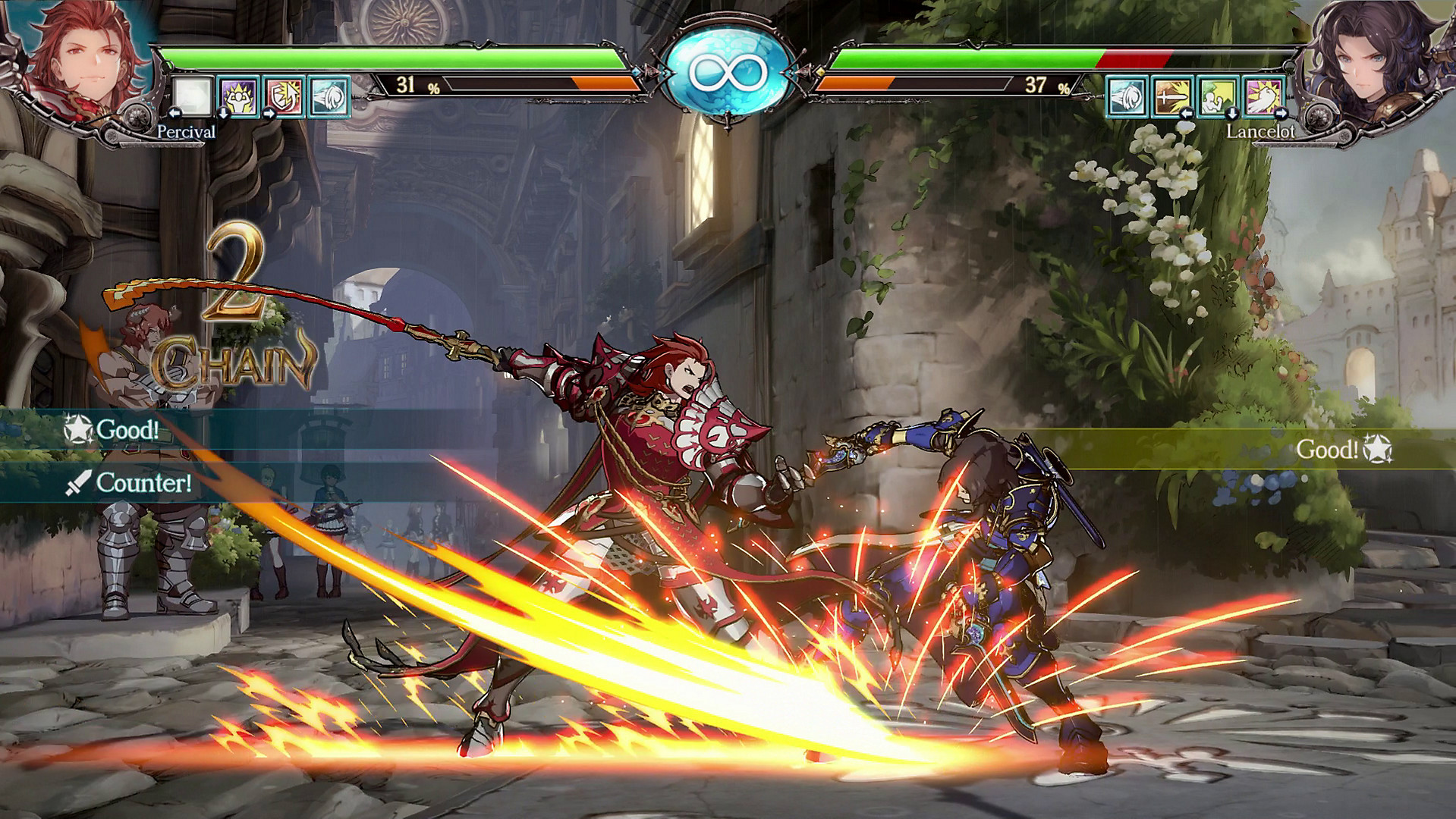 Bringing all of these fundamentals into the game, you’ll have a slightly mixed experience. That campaign mode I mentioned earlier is hugely feature rich and quite expansive, with the player piloting Gran and his ever-expanding team of followers through level after level of enemy mobs, bosses and playable characters who are added to the campaign mode roster once defeated.

The upside of this mode is that it’s about ten to fifteen hours long and offers a lot of progression towards other modes. Outfits and other cosmetics can be unlocked here, as can a twelfth playable character that was released shortly after the actual launch. From mission to mission, the player will also strengthen weapons in such a way that they become more powerful and interesting to us, but this is purely reflected in the campaign mode itself.

The story, and in particular the cut-scenes in this mode are fantastic — and make no mistake, I stuck with it because I became quite invested in what was going on. The visuals throughout the game are genuinely incredible, but during campaign story sequences, they are basically flawless. 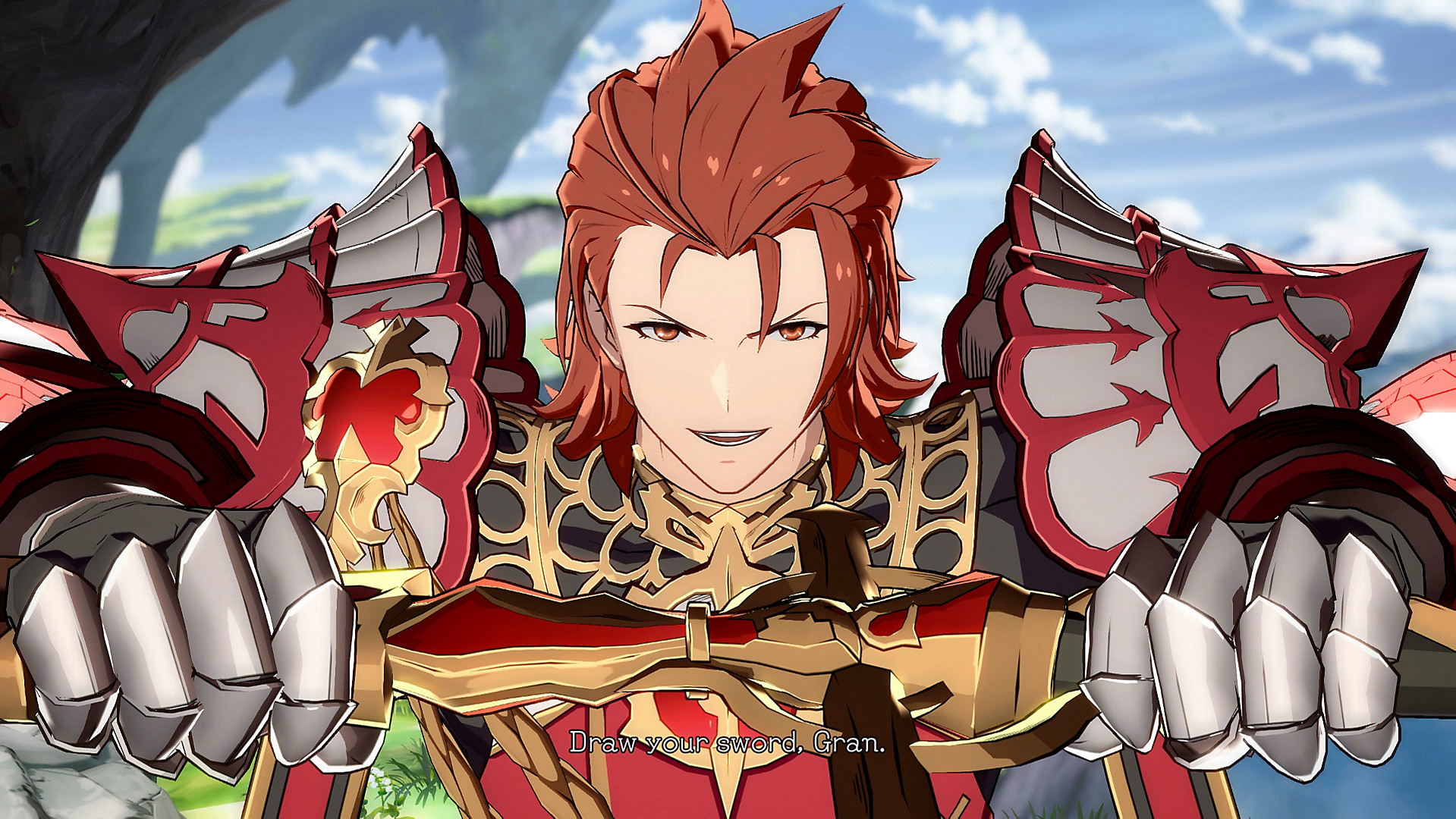 On the downside however, this mode is a little bit dull. The waves of enemies are almost entirely hopeless, and there’s really no need to fight these enemies with any other than the most straightforward series of attacks. Even the bosses and other named characters that appear offer little challenge, as long as you’ve been upgrading your weapon(s) in line with your progress.

There’s also an Arcade mode that offers a more traditional approach to working your way through a series of enemies until your character’s story arc is completed. The unique feature of Granblue Fantasy: Versus Arcade mode is that between rounds, the player can choose the difficulty of their opponent — from easy to extreme (sometimes the choice is limited.) This is another risk and reward decision, with players choosing easy opponents scoring low at the end of their run, but those being defeated by any opponent losing all their score.

A training mode that features a number of challenges really rounds things out nicely, especially considering Granblue Fantasy: Versus’s unique control mechanisms and the way in which it wants new players to learn and improve as they go. I was delighted to see training modes here that really made me feel that I was getting better due to being “taught,” with my learning then being tested in the challenge modes. 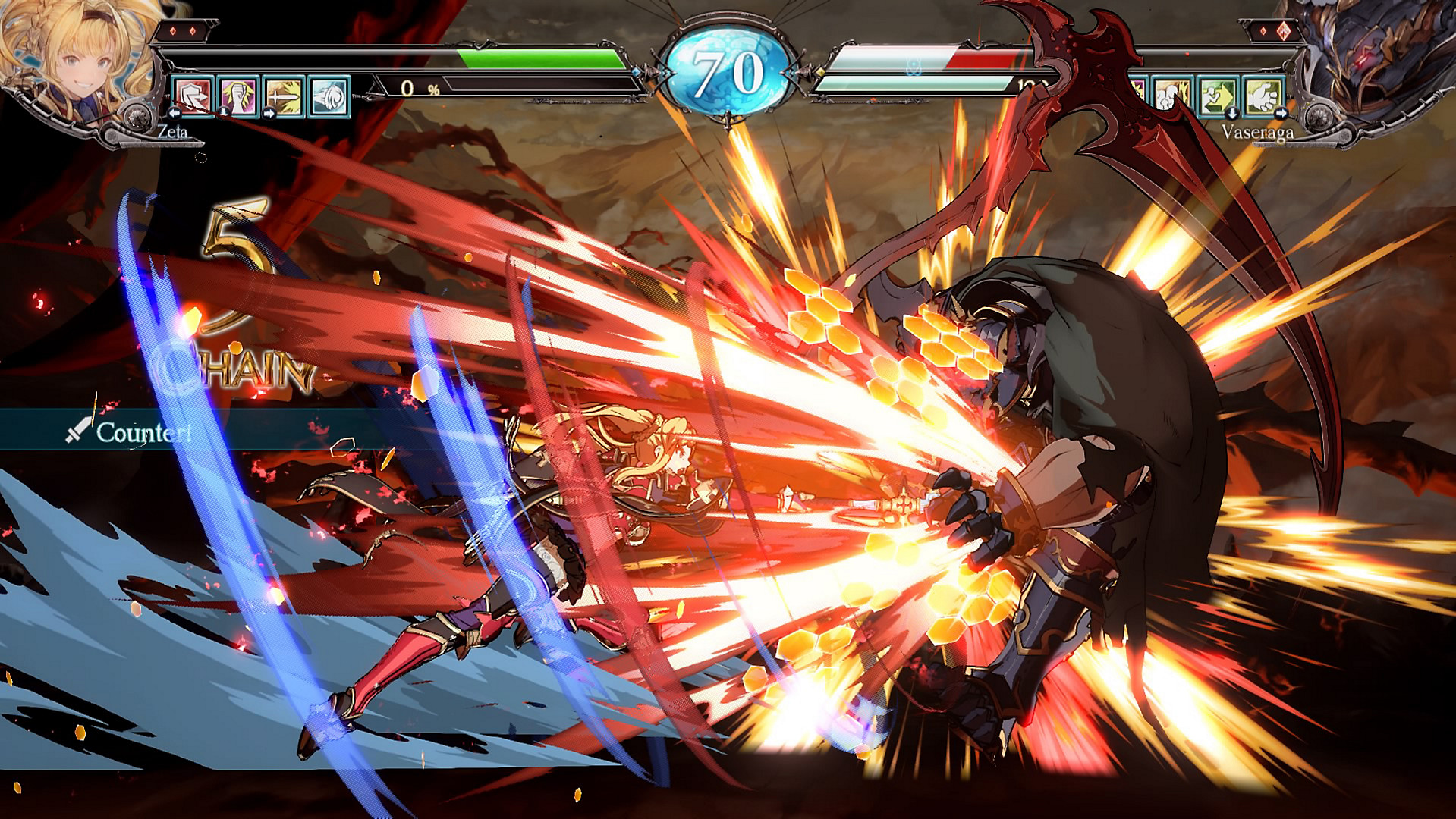 Obviously a large (and possibly the only) part of the game that some players will be keen to explore is the online play, which sadly is an area of weakness for me due to having a <15mb internet connection speed. What I can say is that the online scene seems very strong to me, and it’s clear that the netcode (which is delay based) is strong and for the most part, could even accommodate my slow connection.

Online players seem to have adopted really well to the mixed control mechanisms that I’ve described in the game, and it’s clear that players alternate between the traditional inputs and the shortcuts as needed to great effect during each fight. Personally, I fought mostly other low ranked players and therefore I’ve had a fairly mixed experience, but when I did come up against a really good player, it was obvious that the systems in Granblue Fantasy: Versus allow for amateur, intermediate and high level play in equal measure. 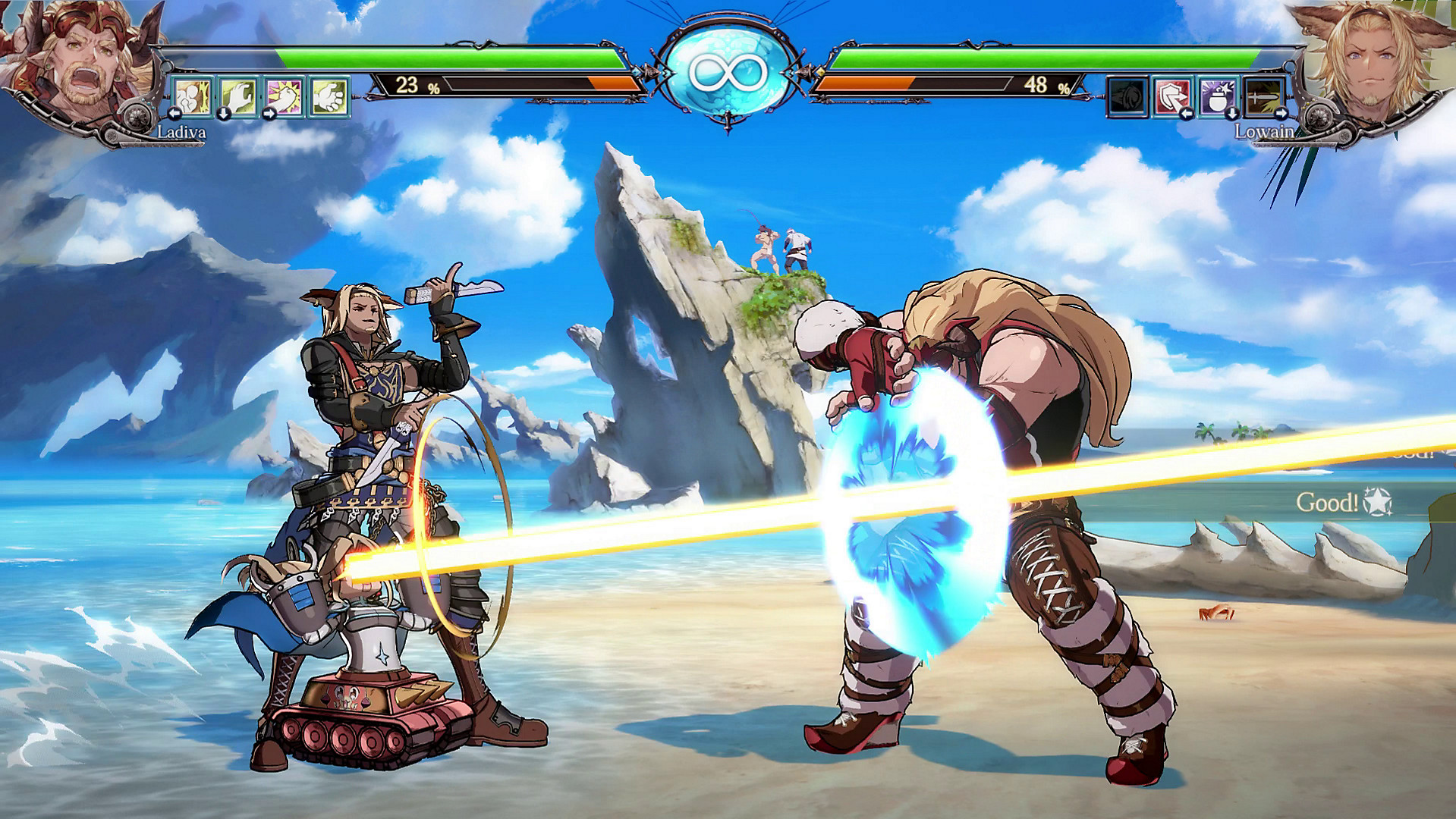 With such a fundamentally strong engine and frankly incredible graphics and sound, Granblue Fantasy: Versus offers a really excellent fighting package. When you layer in the number and variety of modes, as well as how well featured they are, it’s undeniable that Granblue Fantasy: Versus is a fantastic fighting game. It doesn’t reach the heights of Super Street Fighter IV Arcade Edition (for me at least) which is always the target to beat, but it is certainly up there, and has enough uniqueness to stand alone from the pack in any case.

You can find Granblue Fantasy: Versus on PC and PlayStation 4.