As our lives become more and more complicated, we often seek simpler, more straightforward pleasures — things like drawing with our children, or taking a walk with friends. In a related parallel, I seek release from playing board games, and yet my beloved hobby seems to be getting more and more complex with each new release. The Pursuit of Happiness strips worker placement back to its bare minimum, linking its highly immersive and relatable theme to a set of simple mechanics that just make sense.

With a title like The Pursuit of Happiness, it would be reasonable to guess that the objective of the game is to finish as the happiest player, and that assumption is exactly right. One to four players each act out a persona – much as they do in a game like Fog Of Love — and the winner will be the player who achieves the highest “Long Term Happiness” — aka victory points. 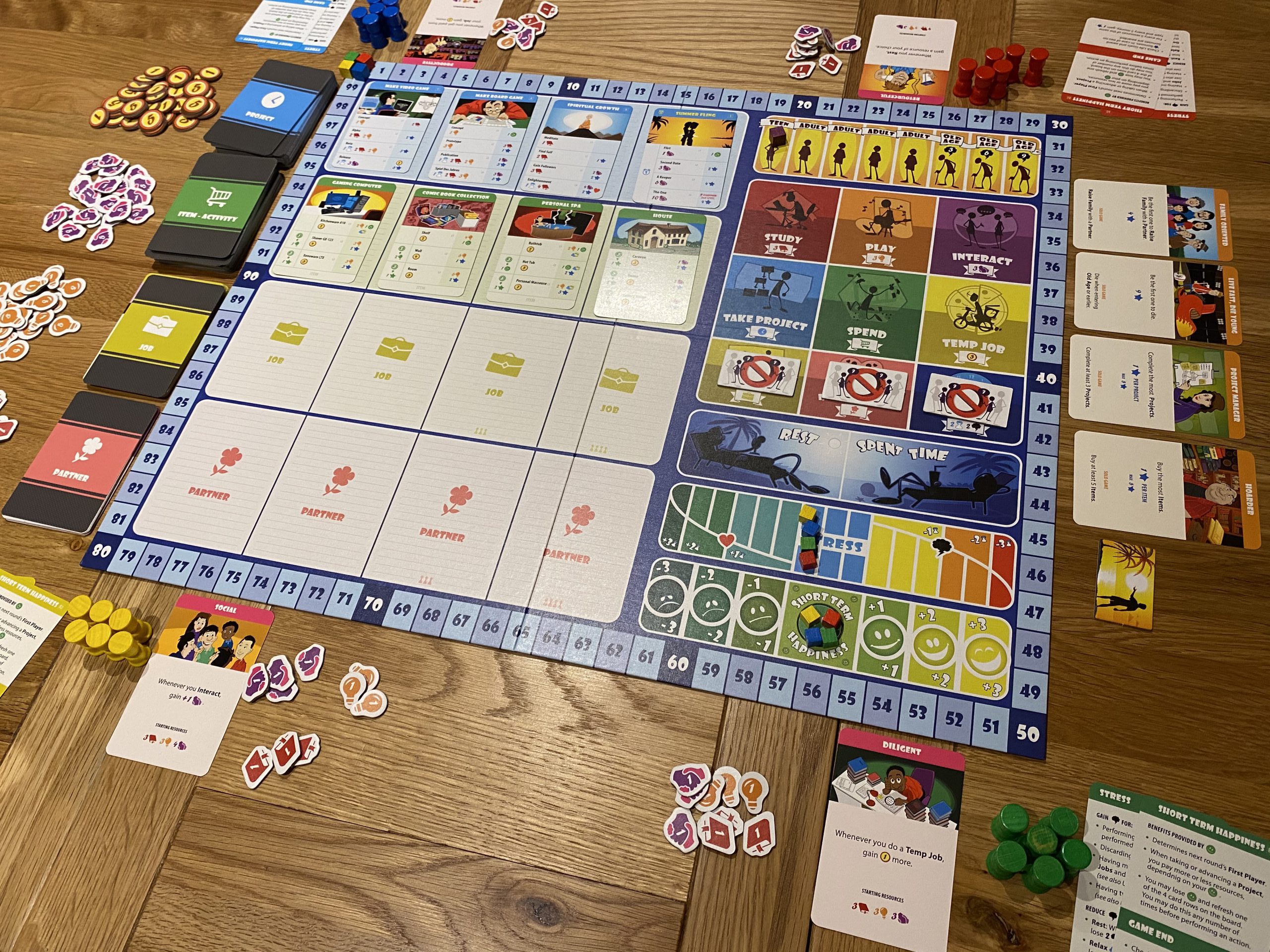 To do this, players will begin the first round as teenagers with nothing but a “Child Trait” card and the resources it gives them — some knowledge, some ideas, and perhaps some social skills. As each round passes, players will spend their workers (hourglass pawns representing time) on working jobs, undertaking projects, building relationships and investing in items.

As soon as each player has used all their pawns, the round ends and time advances — through adulthood and into old age, at which point the stress of time begins to take its toll on the players until, one by one, they die. Stress, in fact, has a key impact on players throughout their whole lives and living a stressful life will reduce the number of hourglasses you have, whilst living carefree will increase them.

The board in The Pursuit of Happiness is simple and clear, despite the slightly comical font that accompanies the cartoonish artwork. Down the (roughly) two thirds of the board from the left, there are spaces onto which between two and four cards will be placed representing Projects, Items or Activities, Jobs and Partners. Job and partner cards are double sided, giving the player options when randomising the decks, whilst Project and Item/Activity cards have just one side. 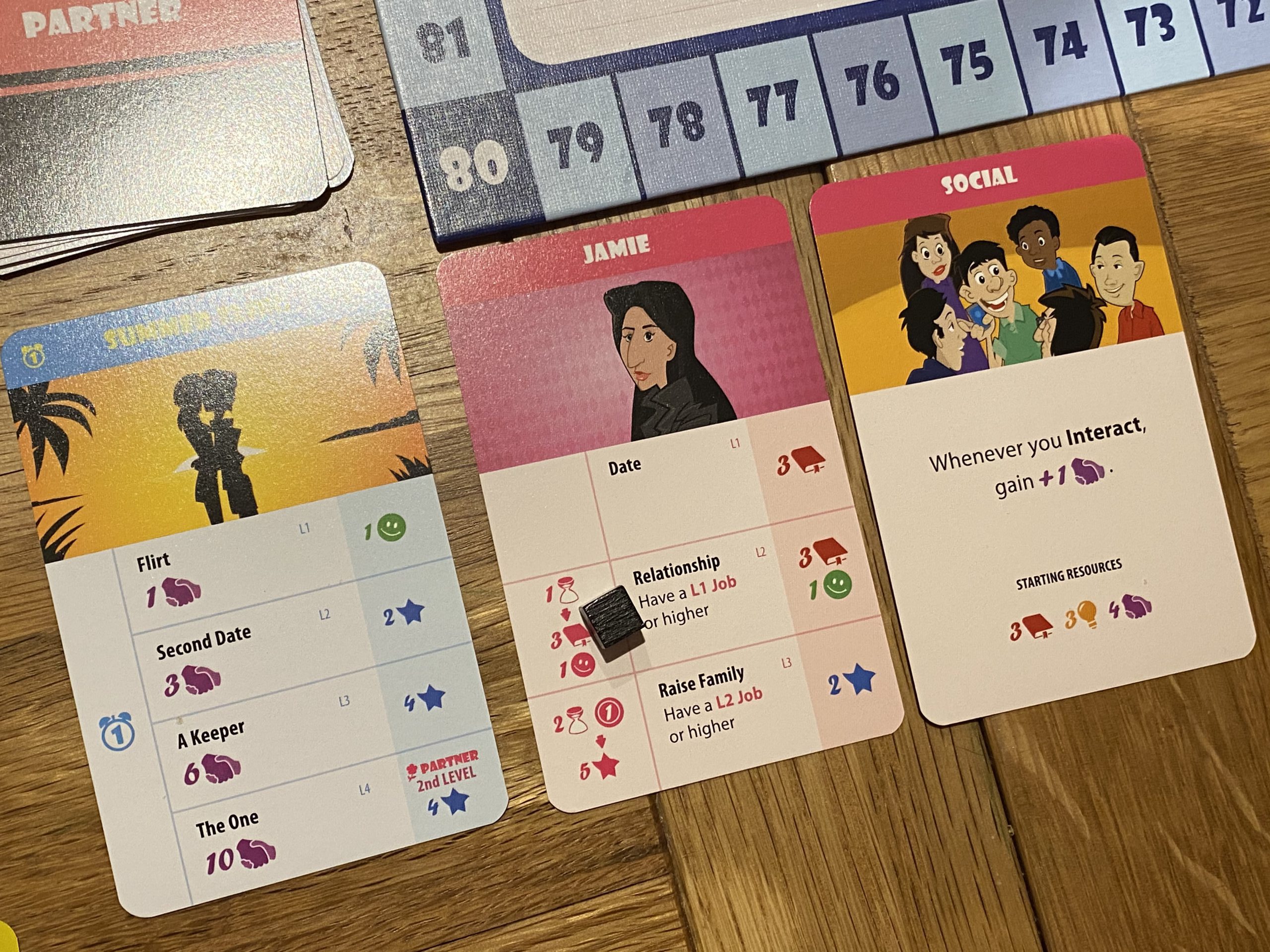 On the remaining part of the board, there are action spaces that relate to the way in which the players can spend their hourglasses — study, play, rest, take a Project or Item, do your job (or a temp job) or work on a partner. Most of these actions are very straightforward to resolve – with any benefit printed on the board right below the action space.

For some of the actions, the player will need to look at one of their cards — or a specific kind of “Group Project” card that someone else has already played. These cards — Projects, Items, Jobs or Partners — can be advanced on the card themselves, with costs and benefits for each of up to four levels. These card actions may or may not use an hourglass (as indicated) and so can create the effect of having more turns within a round. 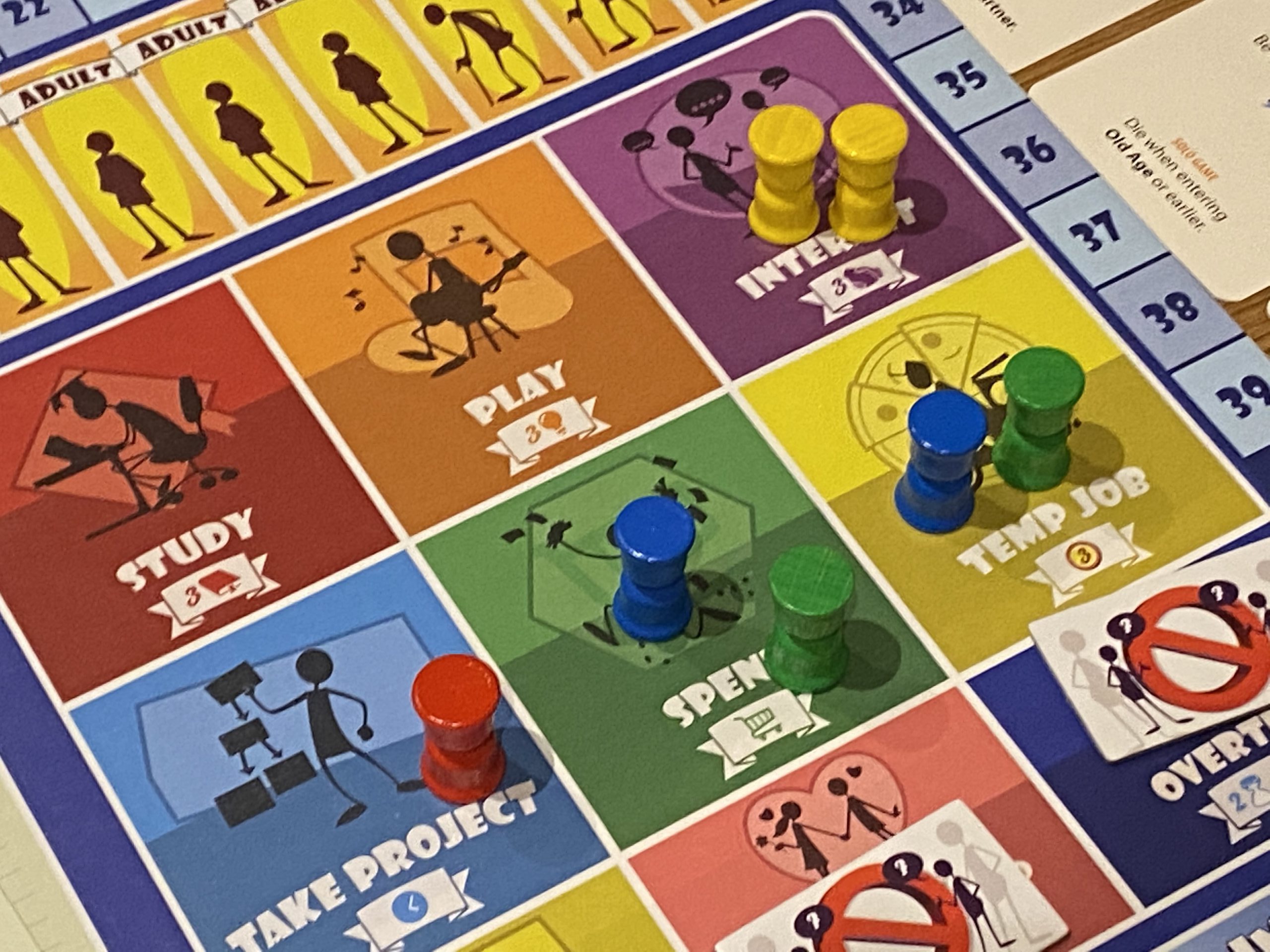 To give some examples of how this works both mechanically and thematically, a player might want to advance their Video Game project. The first level would already have been paid when the card was taken, but now each additional level must be paid in money, ideas, knowledge and so on. The reward, in turn, is usually more knowledge (experience) or ideas, or money. Sometimes, frequently in fact, completing these levels will reward the player with Long Term Happiness — IE points.

Players are therefore incentivised to literally live their best lives – and this is absolutely The Pursuit of Happiness’ trump card. No other game I’ve played, including the classic Game of Life, has even come close to recreating my own life choices and decision-making processes, but The Pursuit of Happiness nails the theme in a near-perfect and very straightforward way.

Despite the simple structure and generally quite solitary focus, The Pursuit of Happiness generates conversation and shared experiences like few other games thanks to the familiarity it creates. A few long term goals (one per player) will be dealt at the beginning of each game, but these are the only “guidelines” the players get. Sure, you might score more for living longest or even dying first, or you might be directed to raise a family, but you can certainly still win if you ignore all these things. 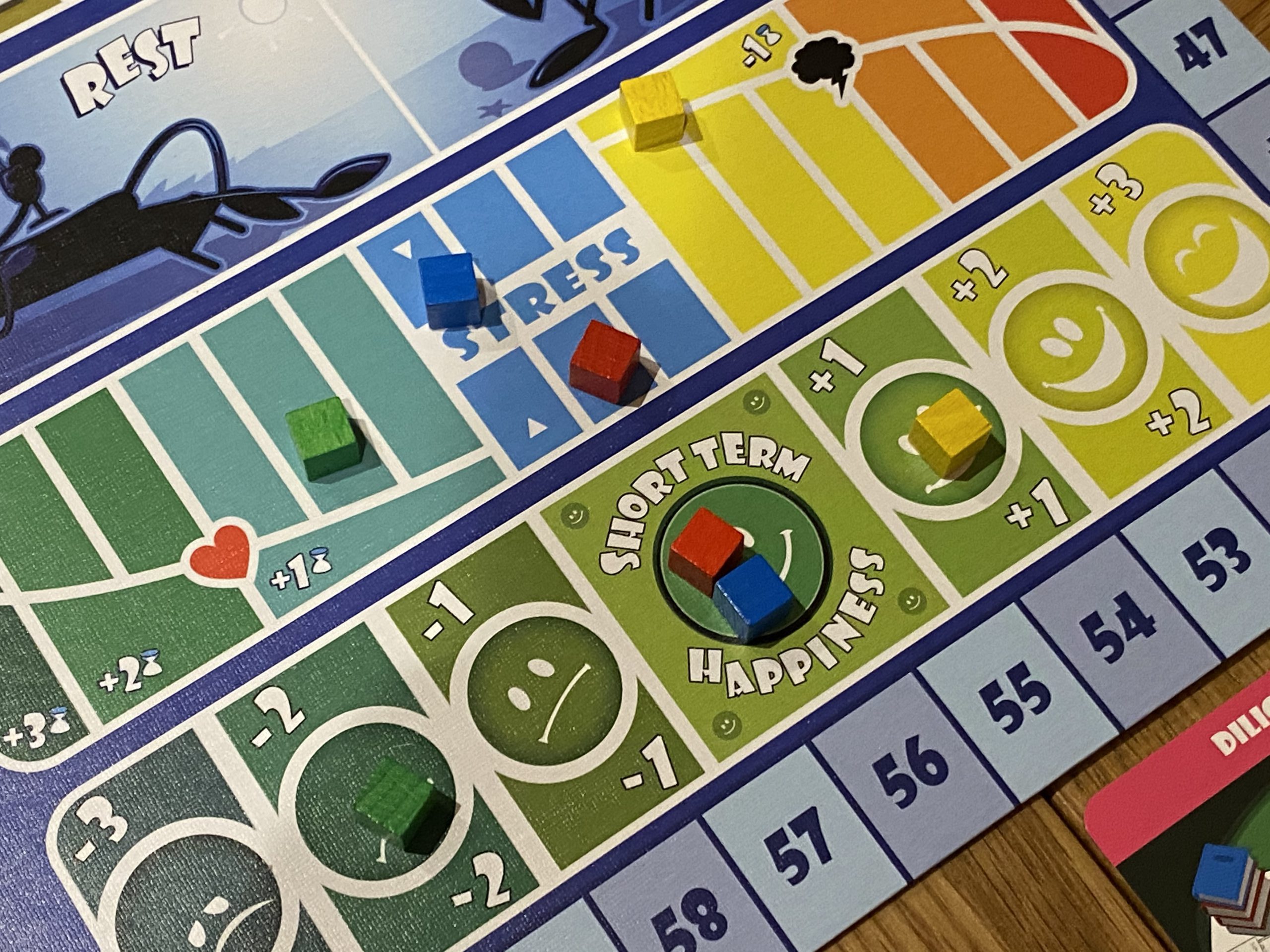 The way in which The Pursuit of Happiness brings structure is through some of its thematic limiters — that stress track that I mentioned earlier being the main one. Each round, players pay upkeep for their items, and take stress when they can’t do so. They also get stressed when in more than one relationship, or when holding down more than three Projects, Partners and Jobs in any combination.

Taking stress will eventually move a players tracker leftward through progressively worsening shades of yellow, amber and red as they spiral into overwork, depression and God-knows-what else. With each new section comes a reduction of one hourglass, and should you ever drop off the bottom of the track, then well, you’re dead, man. 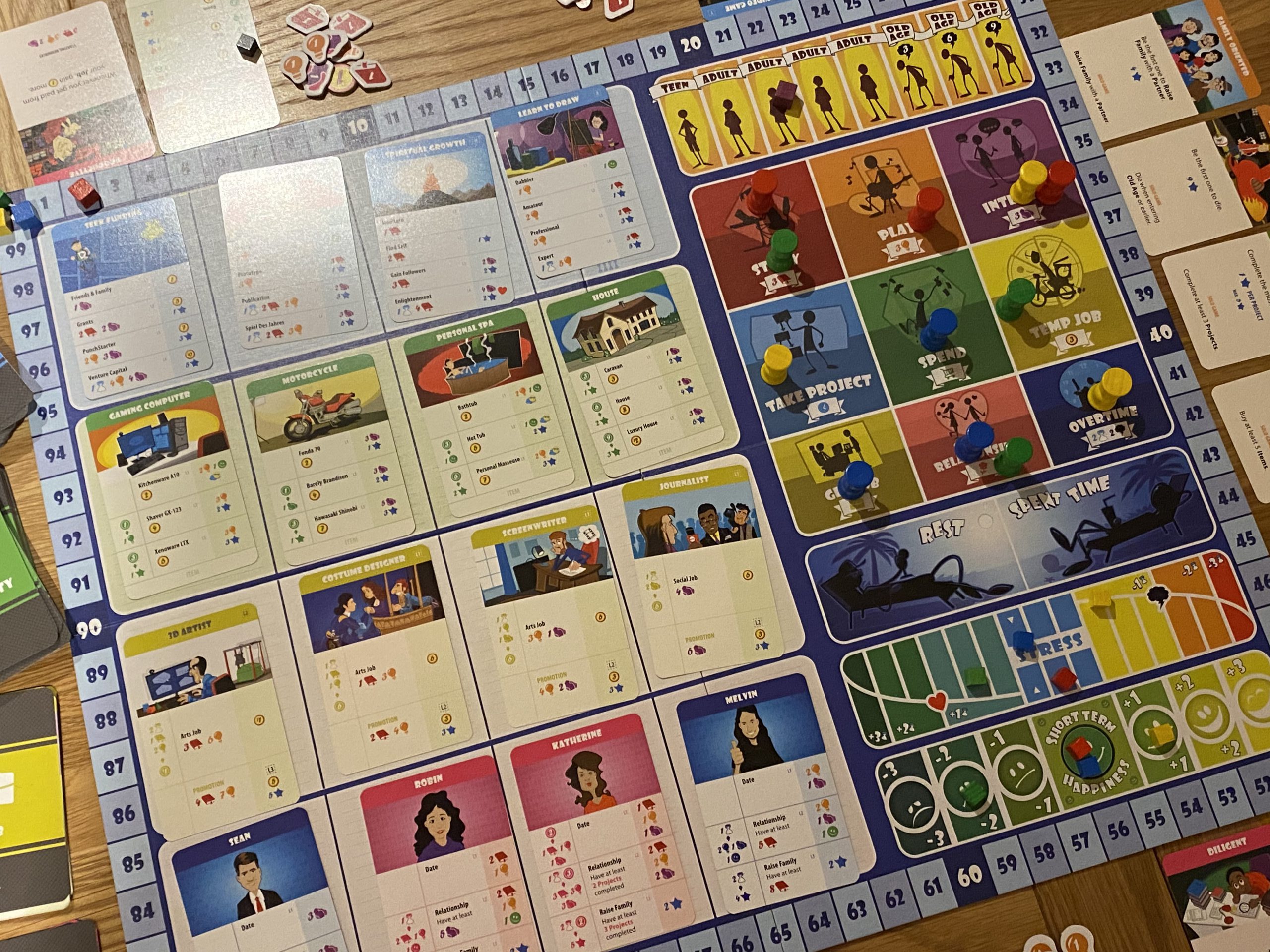 I should mention that nothing in The Pursuit of Happiness hints at the “real world” consequences of taking on this level of stress to the extent that it would bother younger players, but adult players know exactly what’s happening. When Sue on the other wide of the table looks down at her two jobs, her husband and her lover, her three failed projects and a car she can’t afford, she’ll know exactly why her stress level just dropped from green to amber.

Elsewhere, of course, some Projects or other cards might give you health benefits that move you up the stress track and add additional hourglass tokens. Marathon runner? Yep, that will rightly make you more healthy and add “thematic” years to your life, but will it make you just as happy as Sue’s summer fling? Probably not, so you better use that extra time wisely.

In terms of presentation, I’ve already mentioned how clean and simple the board is, and the cards in The Pursuit of Happiness are equally straightforward. The hourglass tokens are surprisingly large and chunky, actually, but the other wooden tokens (cubes) let the side down slightly by being just about as basic as they could possibly be. 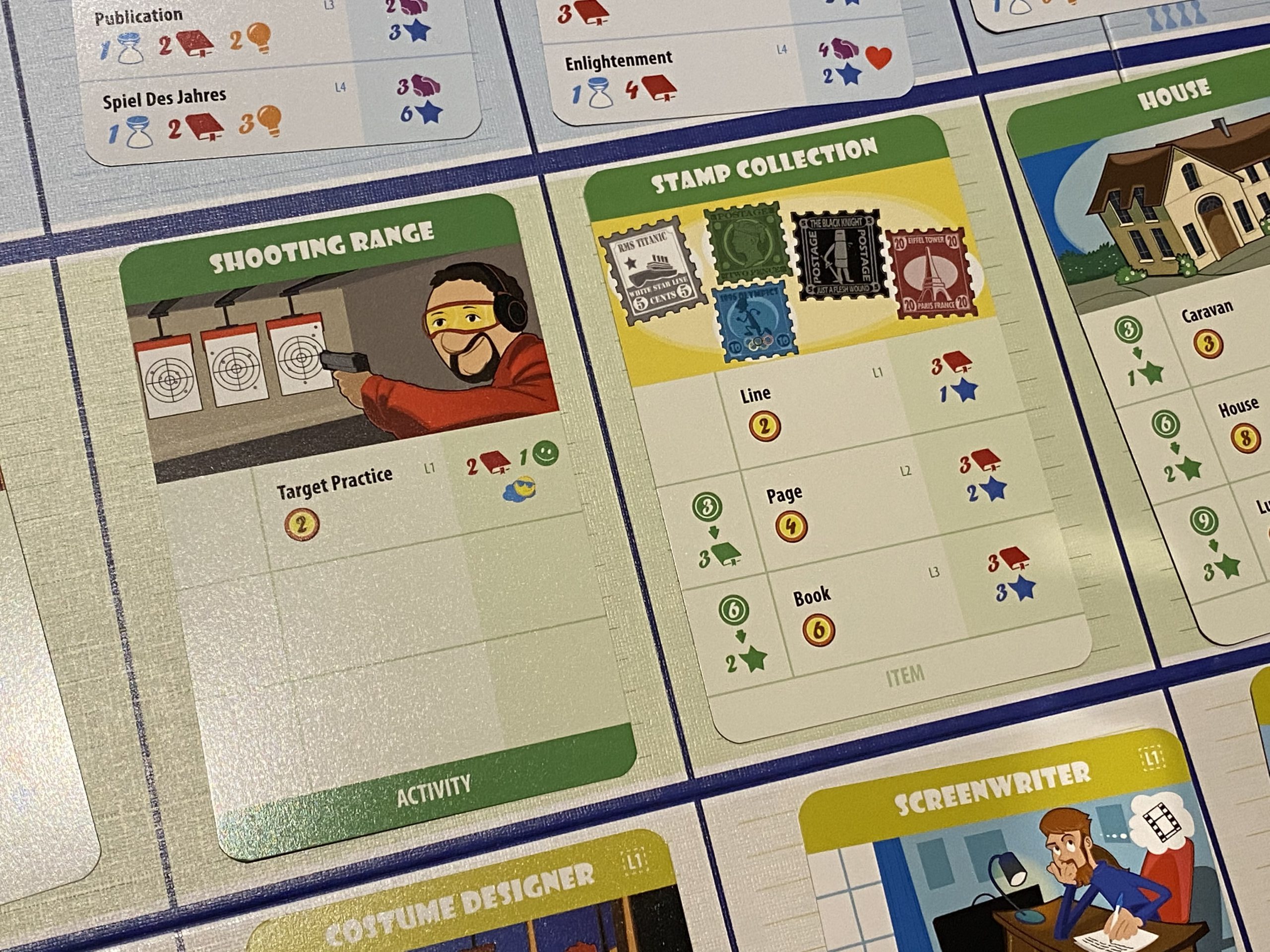 I should also mention the artwork in The Pursuit of Happiness, which I think is among the most unique I’ve seen. The images on every single one of the 200+ cards is cartoonish and evocative, with a diverse range of characters engaging in the activity or indulging in the item depicted. The downside for me is that I don’t actually like the art style that much, but I cannot deny its functionality, uniqueness and broad appeal. It does, perhaps, indicate that The Pursuit of Happiness is more of a kids game than it actually is, although as I keep saying, it’s simple enough for most young players of maybe ten and upwards to grasp.

Overall then, even though I am a little loath to say it, I think The Pursuit of Happiness is one of the most thematic and enjoyable games that I’ve played in 2020. It’s simple and accessible, but the theme brings a killer hook that just drags me back in time after time. From family focussed CEO to layabout casanova or fitness freak, I love trying different approaches to the game, and whether I win or lose, I always feel that the “story” I’ve told is reward enough. 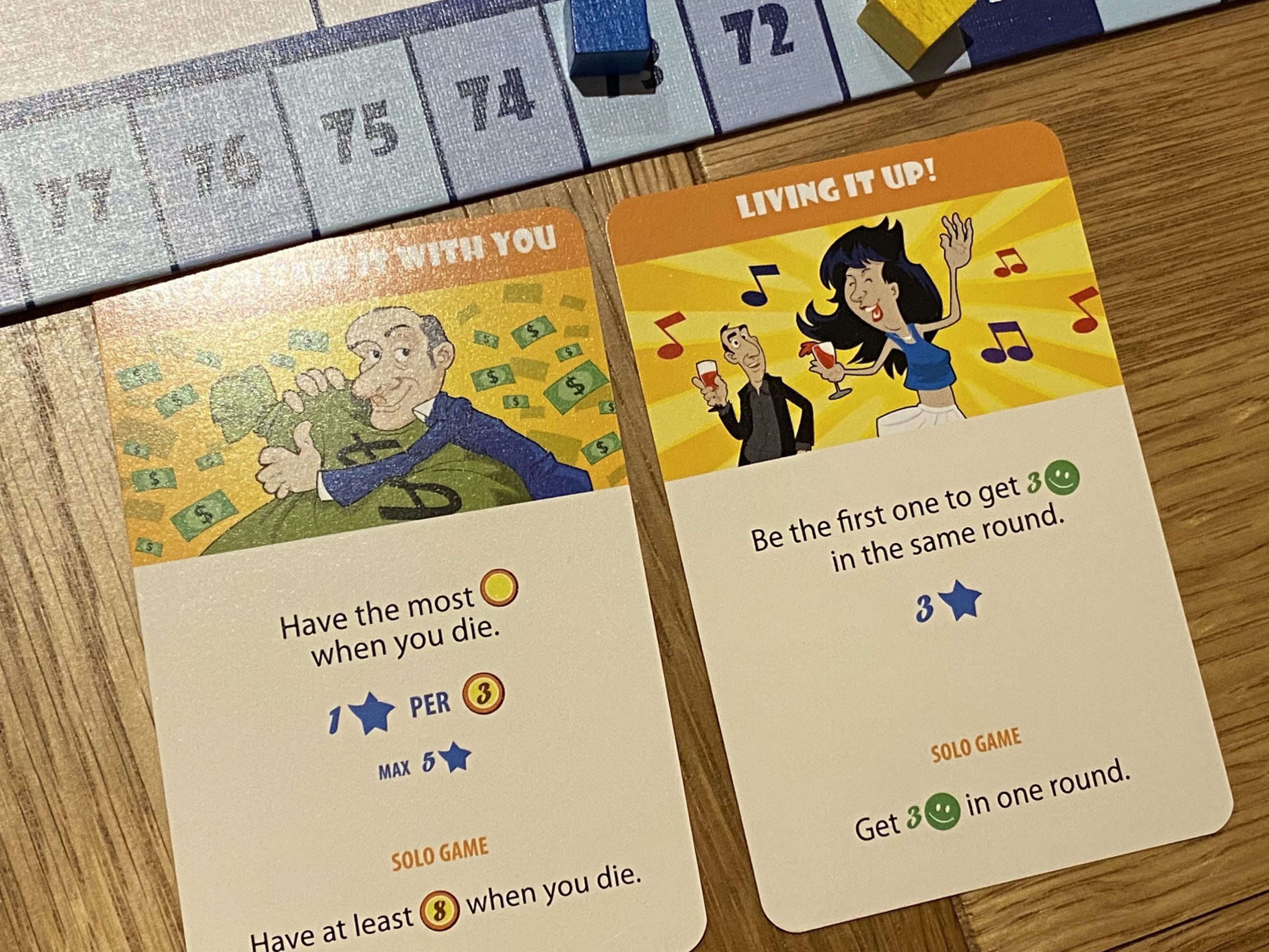 I have occasionally had to check myself with thematic role-playing games because I do lean into them heavily — just check out the Fog of Love review that I linked earlier for example. But with The Pursuit of Happiness, much like Fog of Love, the people I played with seemed to want to talk about the game long after it was over.

If you’re looking for a relatively low complexity worker placement game with a few dashes of engine building thrown in, and you play with the kind of gamers who enjoy lighter themes, you literally cannot go wrong with The Pursuit of Happiness. This may be my new go-to “introduction” to worker placement games, given it’s universal theme and a complexity level that sits just below Lords of Waterdeep and I think that’s quite a high accolade.

You can purchase The Pursuit of Happiness on Amazon and back the expansion on Kickstarter.