Superhot: Mind Control Delete is the third game in the series and while it sticks to the tried and true formula of smashing red enemies made out of glass, it expands the frantic firefights to a ballet through randomly generated rooms full of danger.

The original Superhot was an indie darling, something of which the world had never seen before. Running through white-washed, gritty worlds filled to the brim with red figures that wanted to smash you before you smashed them, each level was harder and crazier than the last. Hand-crafted experiences such as these continued into the realm of VR with Superhot VR, where your body could also control the flow of time and you had to avoid bullets flying at your head. Superhot: Mind Control Delete feels like it takes the core concept to another level, offering you a procedural experience of violence and mayhem that makes perfect sense within the twisted fourth-wall-breaking story that only a series like Superhot could deliver.

If you’re not yet acquainted with what this series is all about, it’s rather simple. You are presented with a ‘game’ to play that redefines the idea of violence and control by suggesting that by playing, you are either actually killing real people or something even more dastardly, and down into the rabbit hole you go. Each level rewards you with the words ‘SUPER HOT’ as if it was describing your performance using some kind of ironic lingo to demonstrate your inane ability to slaughter mercilessly. It’s a reflective thing, and it sort of makes you ponder, while slinging common objects at red enemies, how purposeful this dance really is.

The primary function of the game is to make you feel like an unstoppable killing machine, so there’s something to say for all that. Enemies, bullets, and objects only move when you do, so your control of the action or the results thereof, are entirely up to your precise movements. When I use the words ‘dance’ or ‘ballet’ to describe how it feels, it’s not inaccurate in the slightest. You and these glassy baddies follow each other around the level, trading blows and bullets, all while trying to avoid each others’. It very much feels like conducting an orchestra or dance number filled with prismatic explosions and death. Beyond that, you are able to rewatch your destruction at full speed after each encounter, and it’s quite a visual feast to behold. 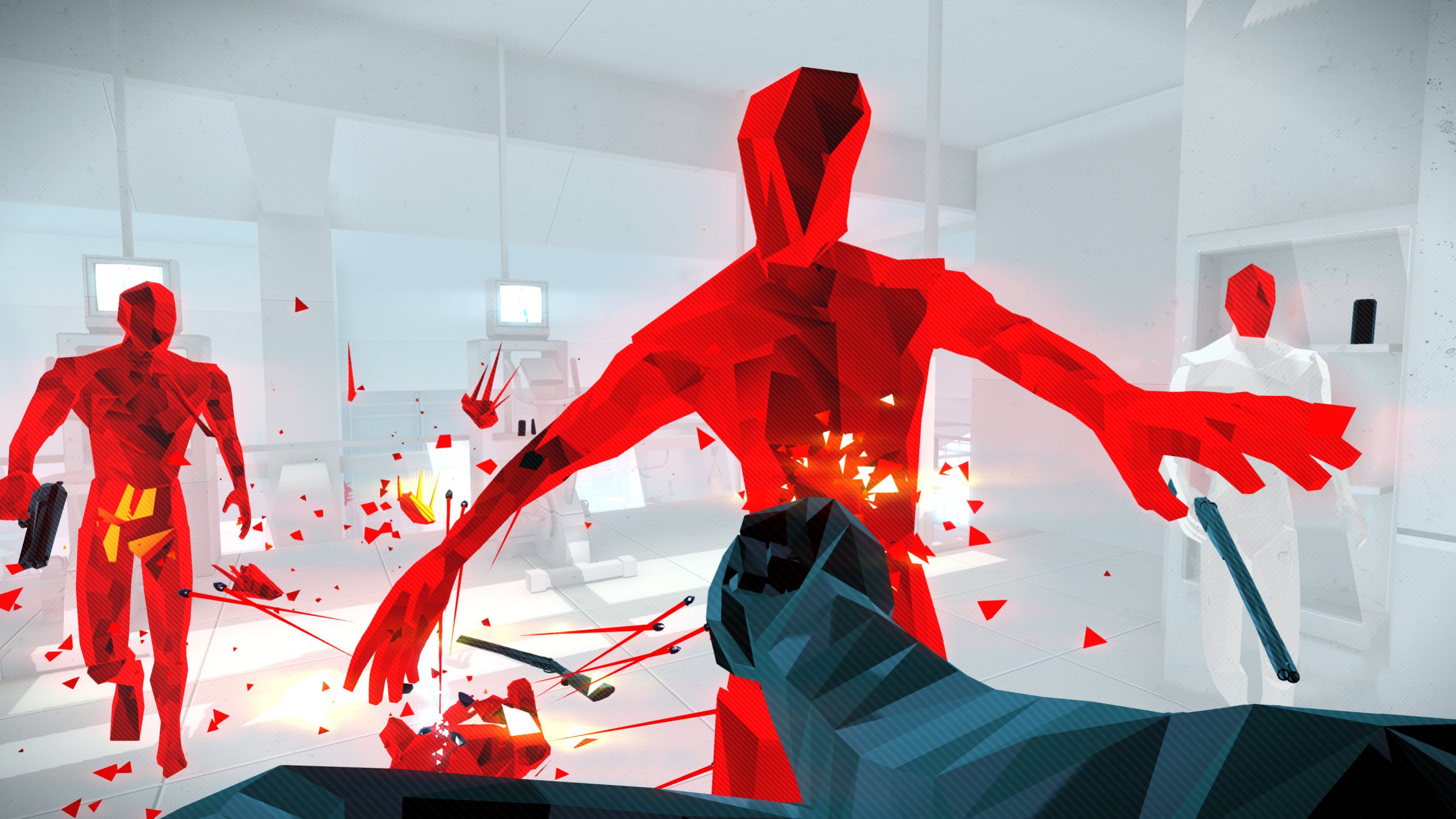 What Superhot: Mind Control Delete changes up the most is the procedural creation of the level system and the health system. The overhead map is a new feature and lets you control your path as each level branches out randomly, with only one path correctly leading you to the exit. Regarding health, in the original two games, you were playing through one level at a time where every misstep meant restarting the level. Now, you start each chapter with three hearts and can exhaust through them as you play through the levels, giving you a bit of a safety blanket to play more creatively, in turn. Dying means restarting the entire chapter, but it’s not as bad as it seems.

Every time you die, the game will regenerate the chapter randomly, providing you a new experience that may be a bit harder or easier as a result. It might be a bit frustrating to go through a new set of levels that you haven’t seen before, but as much as it seems like an action game, it really wants you to slow down and survey your options. You can give yourself a bit of an edge over your enemies, however, with hacks. 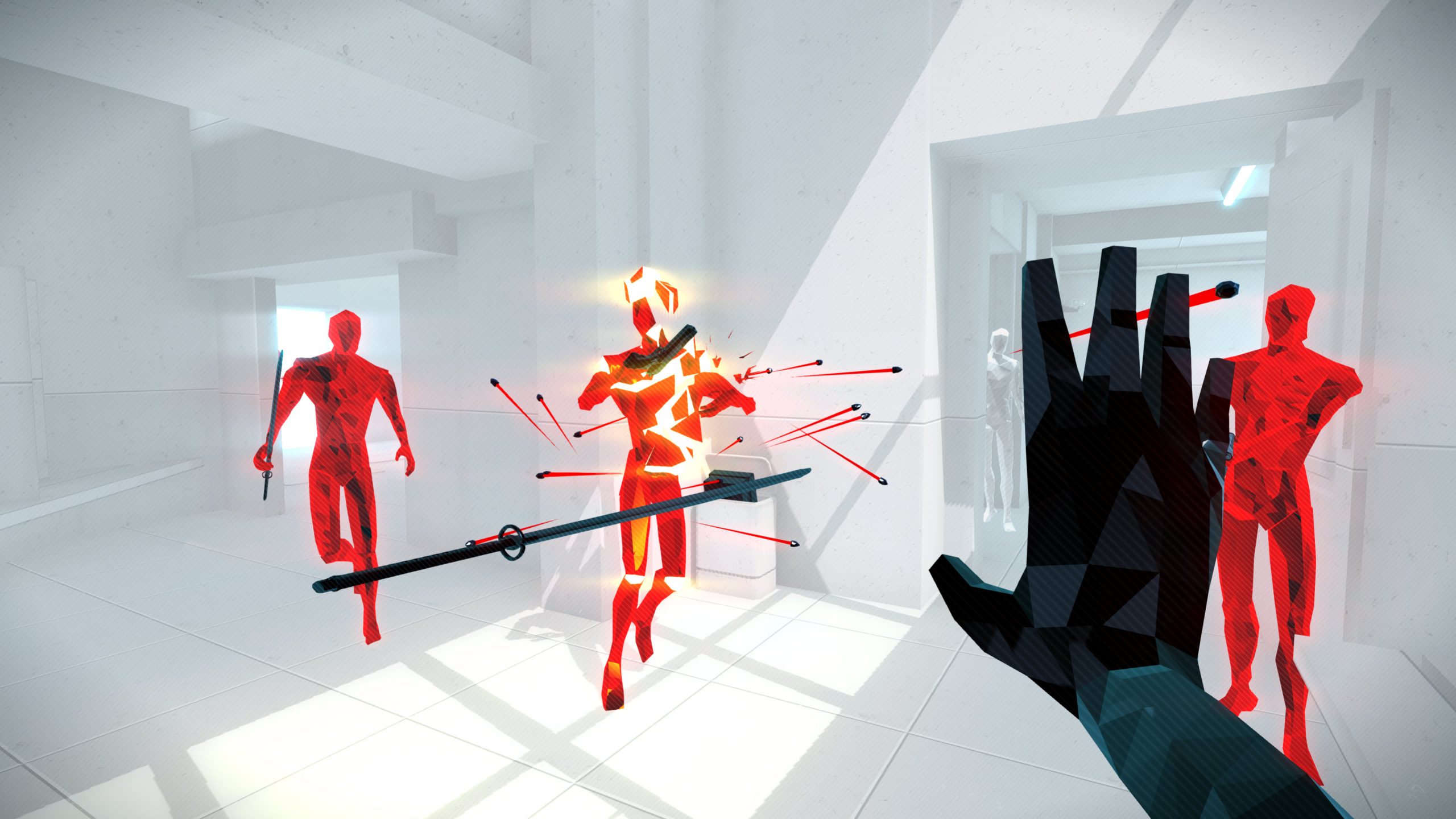 Hacks come up randomly through your runs through the levels and provide additional support to your efforts. Gifts such as a health refresh could mean a matter of success or failure, but you are always given two random choices and can pick your favorite. Most of the time, it’s a hack such as a speed increase or modifying weapons so they have more ammo, but either way, it’s always something good. You can increase your hack arsenal by discovering unlockable hacks on the map and once unlocked, they can appear in your ventures through levels from then on. This provides you a permanent unlocking system that always feels rewarding and never distracting. It ultimately furthers you into fulfilling the role of this over-the-top action hero with superhuman abilities beyond your ability to manipulate time.

While I wouldn’t say that there is too much that separates Superhot: Mind Control Delete from its predecessors, it’s more of the same great cerebral action that just feels good to play and that is welcome in any situation. The core mechanic is so well-executed that the series doesn’t really need to try to improve or blow apart what makes the feeling of elation so effortless as you sidestep bullets and send katanas flying into adversaries, dispatching them from across the room. The new procedural system excels at giving you a fresh experience every time you play and keeps you coming back for more. Check it out, see what the fuss is about, and give it a go. Your trigger finger will thank you.

Superhot: Mind Control Delete is available for PC, Playstation 4, and Xbox One.