In the UK, as recently as twenty years ago, most households only had access to five TV channels — even then, one of those channels was brand spanking new. This led us poor British folk to watching a lot of crap. More often than not, this crap consisted of game shows hosted by grimacing automatons who ultimately all ended up having nervous breakdowns. Among the most popular of those shows was Family Fortunes, originally hosted by Les Dennis. Weird Things Humans Search For is a modern take on the Family Fortunes model, in which players attempt to guess what the most popular answers to stupid questions might be. If you guessed that the answers to those questions were generated from real entries into a popular search engine, then you’re already in with a chance of winning…

First and foremost, Weird Things Humans Search For (Weird Things) is a party game that takes a very straightforward approach and delivers a relatively minimal structure, with the focus instead being to simply create a structure for people to play and experiment in. Of course, Weird Things does have rules and scoring criteria etc, but you might choose to change them, introduce house rules and so on, which I feel the game encourages somewhat (whether intentionally or not.)

The game requires one player to act in the Les Dennis role in order to “host” the other players. The agreed host will draw a card and then read the search term shown on it aloud. The players (or teams, depending on how you play) will then write down a main answer and a bonus answer. If a player guesses the top answer correctly, then they get four points. If their guess isn’t top, but it does appear, then they’ll get two points. Finally, if their bonus answer appears anywhere, then another point will be awarded. The winner is the team (or player) who reaches a predefined number of points first, or who has the most points after a set number of rounds will be the winner.

As an example of a round, the host will draw a card and read aloud “has a person ever been born…” and then the players or teams would write answers such as “swallowed by a whale” or “fitted with a laser beam in their forehead.” In this case, swallowed by a whale is a listed answer, but it isn’t the best answer, so it would result in two points. There is no mention of lasers on the card, so sadly there are no points for that one (although I suppose the host might offer a point for effort, since gameshows rarely seem to have any order as far as I can tell.) And that, as they say, is that, when it comes to gameplay in Weird Things — it’s a simple concept executed in a straightforward way. 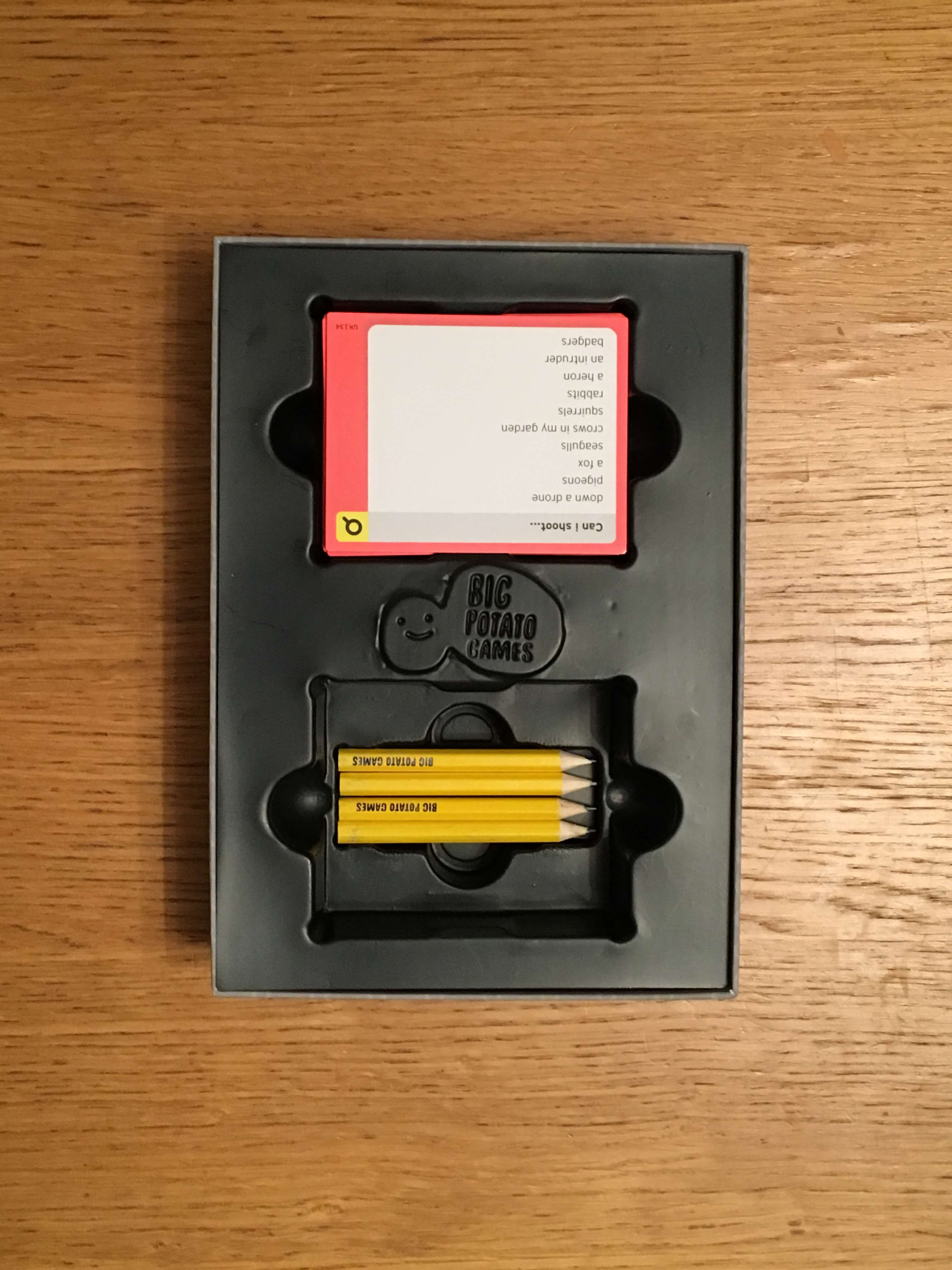 It’s hard to wax lyrical about the contents of Weird Things, since the box contains a relatively straightforward set of components. On the subject of the box, Weird Things features perhaps one of Big Potato Games’ most low-key boxes, despite being attractively marketed in illuminous orange with bold white lettering. There’s a snazzy, brief manual that achieves what it needs to in suitably few words, but aside from the proposed scoring criteria, there’s little in it that you couldn’t have simply guessed at having understood the concept.

What you do get is a small (sometimes too small) handful of pencils, score and writing pads and then an absolutely huge deck of subject cards, each of which describes one of the searches, as well as a number of choices that reflect the titular Things Humans Search For. These searches are fairly wide and varied, though thanks to human behaviour being what it is, they tend to stray into the strange, unexpected and often fairly crass, without ever being outright offensive.

The build quality of the cards and other components is high without being over the top, although the search cards are a bit thin and susceptible to damage. That’s kind of understandable given how many of them there are, which is a key factor in keeping Weird Things a viable game to replay. There is nothing worse in a game like this than when someone already knows the answer to some of the searches simply because they’ve played the game too many times and seen it all before. 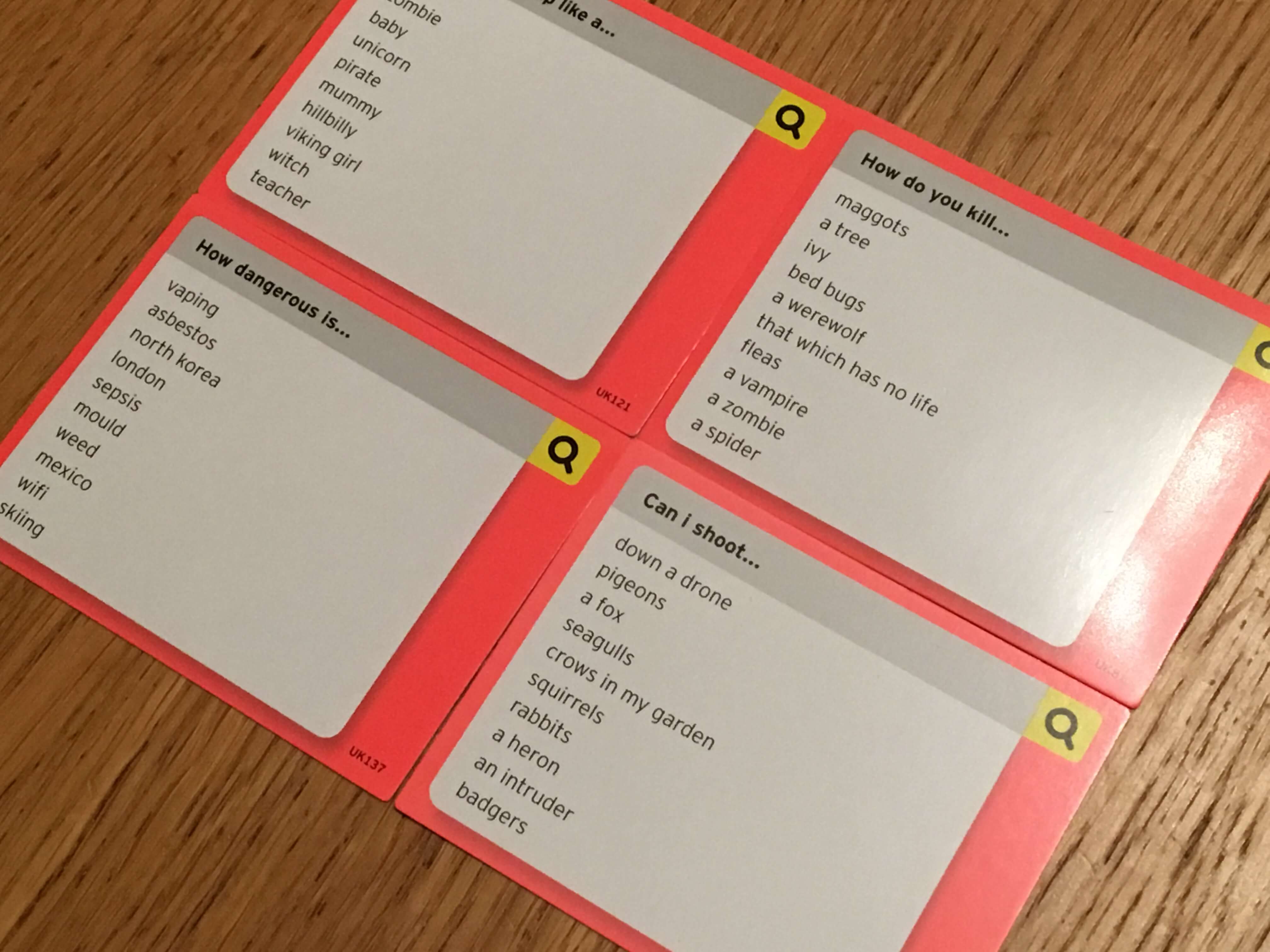 Having played a lot of party games lately (thanks largely to Big Potato Games) I find myself looking more and more for accessibility. Encompassed in that I’m talking about speed of setup, ease of teaching and so on. Weird Things most definitely nails those things, especially if the group that will be playing the game are familiar with the Family Fortunes concept. Weird Things really couldn’t be any easier to get to the table and start playing, which is a huge plus point for me.

Once the game begins, it’s also very good fun for a certain period of time. I’d suggest that it works well as one of maybe three or four different party games that are enjoyed for maybe an hour or so each. It’s fast and funny, generating lots of laughs and quite a lot of discussion/disbelief (since not a lot of the search answers make sense in the traditional way.) It does run out of steam though, because whilst there are certainly more search cards than you’ll ever get through, the formula does eventually get a little bit repetitive.

The only other comment I’d like to make about Weird Things is that I wish there had been some way of designing the game so that it didn’t need the host role. It can be fun as the host if you really get into it (and I do, since it’s my copy of the game) but it’s also slightly exclusive and it also effectively reduces the headcount by one. On the inverse of this point, I did take Weird Things to work and played it with two teams of more than five people each, which was a blast. In that setting, the idea of having an independent host acting as an independent and interactive referee proved to be really good fun. 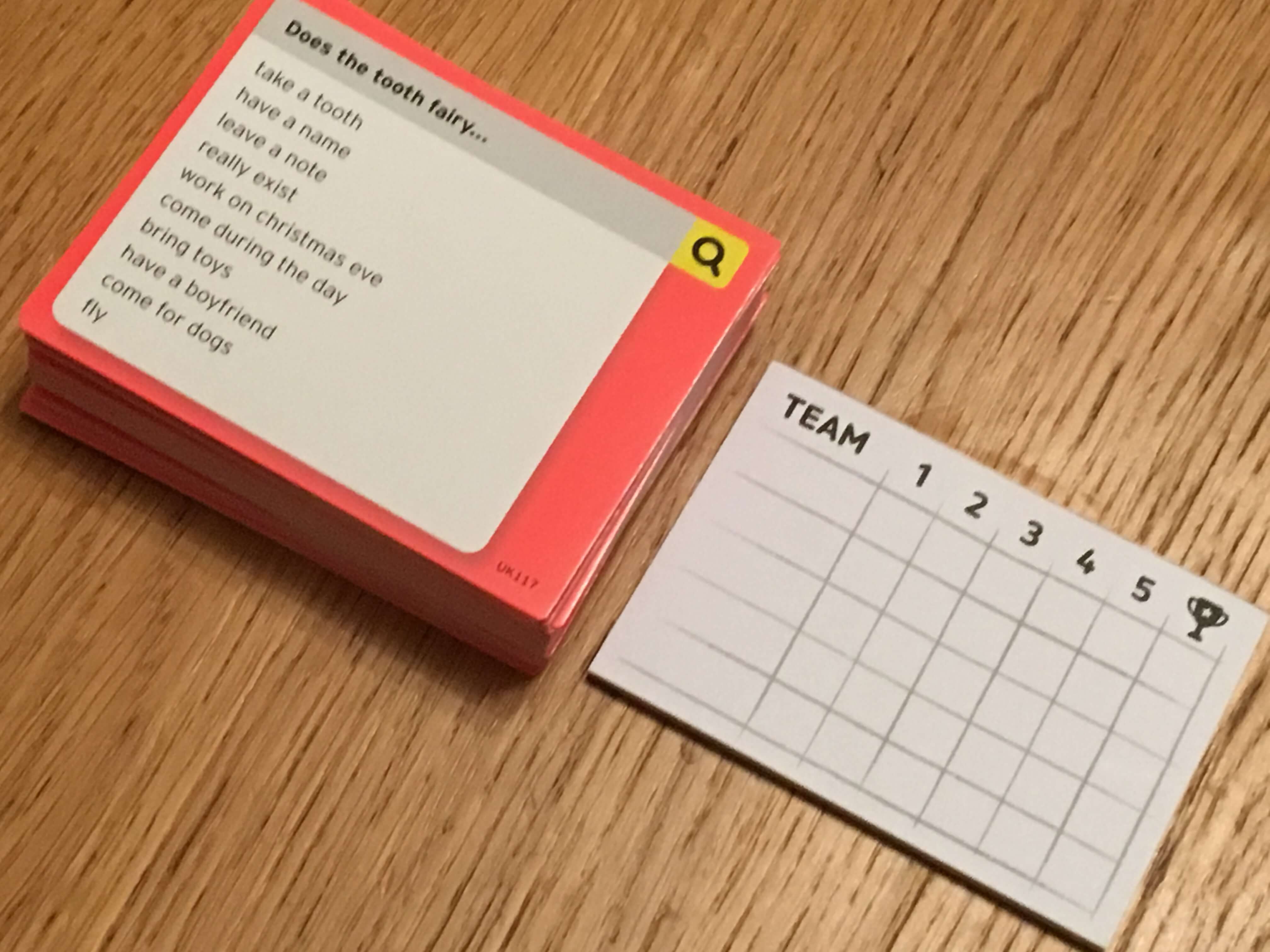 In conclusion, Weird Things is a low cost and fairly high value addition to any party game collection. It delivers a very, very simple concept in such a way that it leaves lots of potential for experimentation — whether that is with how you play the role of host, or simply in the way you interpret and change rules. As a result I think it takes a bit of gaming experience and perhaps an extrovert nature to really get the most out of Weird Things, but if you think that sounds like something you want to be involved in, then it’s likely a good game for you to pick up and build your own game night around.

A copy of Weird Things Humans Search For was provided for review purposes. You can find out more about it on the website of publisher Big Potato Games.

Blockbuster Board Game puts your movie knowledge to the test.

The Noodle Game — Fighting over your food