Tracks – The Train Set Game answer the question, what would happen if money DID grow on trees, and you WERE allowed to build your train tracks wherever you wanted.

When I was a child, many moons ago, I loved trains. My father was also a big train fan. Not as far gone as the trainspotters of the world, but he was an avid model-railway fan, and used to build his own tracks. I was exposed to this world very early, and used to join him at exhibitions all over the country. But, I was too young to play with “Daddy’s Trains”, so was bought my own sets.

Now, for you out there thinking that I got a nice Brio wooden train set, ah ha! You were wrong. I got a number of the classic blue plastic, Thomas the Tank Engine tracks sets. As happy as I was, I knew of the existence of the wooden sets, but never got them. 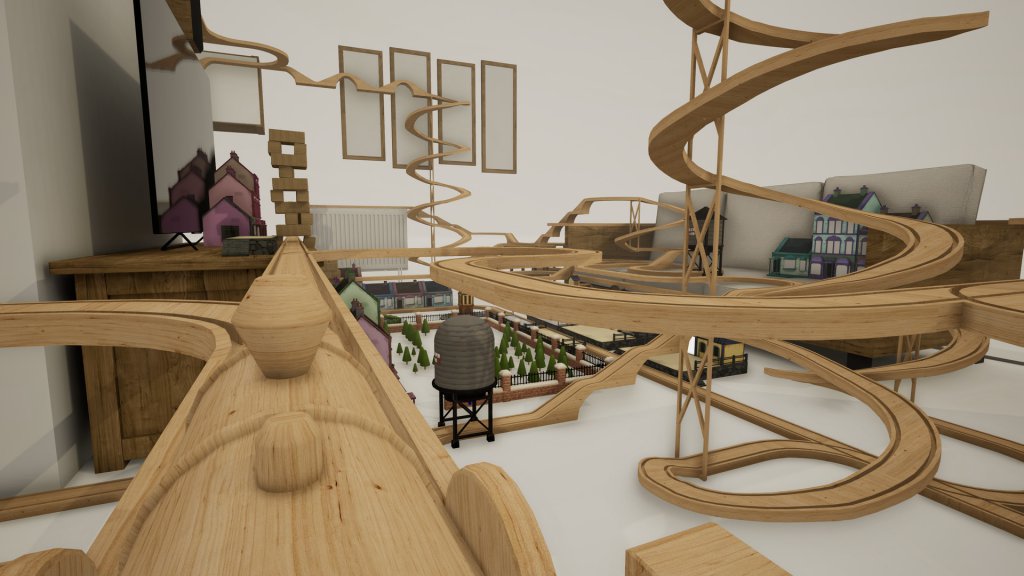 Now, as an adult with my own kids, I know exactly why I never got them: they are damn expensive! (And, as such my kids also wound up with the Thomas sets.)

Tracks remedies this by putting the infinite fun of wooden train sets into a virtual world on your computer.

It is still in its early development stages, and is generally a more creative experience, but what is presented shows a lot of promise. From the title screen you can choose from a few different settings for your layout, from a completely blank void, a living room (at day or night) or a child’s bedroom with bunk beds.

You start with your train on a single piece of track and as you move your mouse away from that piece, a ghost piece will appear, either straight, or turning left/right. Using the mouse wheel allows you to make slopes going up or down, and clicking places the piece — it’s that simple. So, within minutes, you can have a track going round the entire room, over the beds, onto shelves, and wherever you want it to go. The track pieces also pay absolutely no heed to gravity, and will happily float in mid-air, leading to some quite frankly, ridiculous layouts. If you go too close to another track, on some occasions, you can connect those together. This however, shows a limitation of the game. There are only so many different pieces. No three way junctions, no turntables, only one radius of turn. But, like I said, it’s early days, hopefully we will see them implemented, as i know these exist in the real sets. 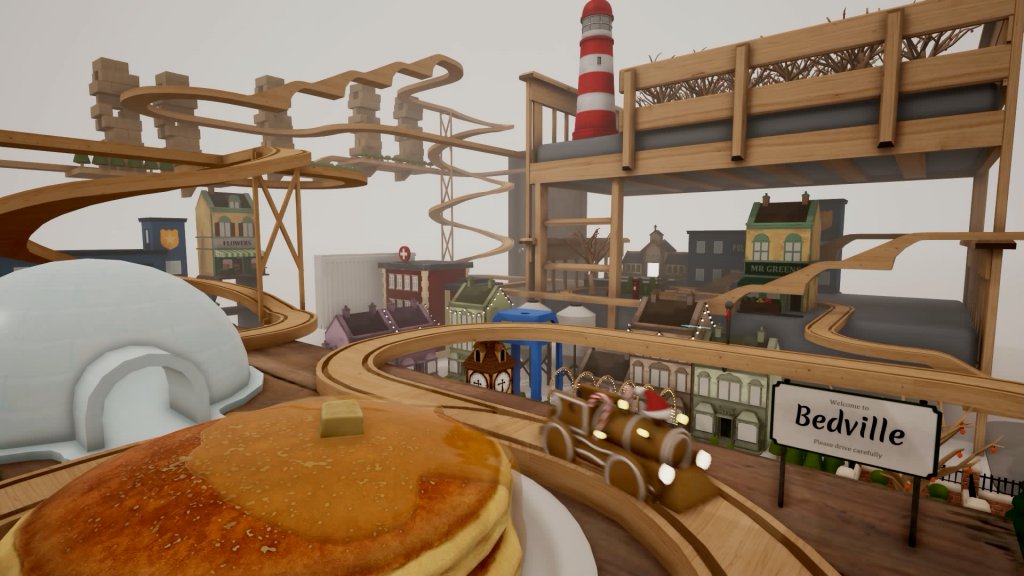 Once you have made your track you can press the T key, which places you in a first-person viewpoint within the train. You can then control it directly with the WASD keys. If you hold to the left or right at a junction, you will take that path. There is even a little whistle in the cab that you can pull as you go around. The train has a satisfying sense of momentum, and can be hard to stop in the correct place at platforms and stations — I will come to these later.

You can also exit the train view once moving, to allow the train to carry on at its current speed, but make sure your track is setup for a full circuit, as the train will not stop if it comes to a dead end, and will instead travel off the end, and go on forever. You can however reset the train back to its initial placement with a press of a button,

There are plenty of decoration parts which you can place around your little world. A variety of building, foliage, animals, fences, and all sorts, all with that classic wooden look. There are also little people that you can place down. Now, in normal circumstances, these will just stay where you place them. But, place a Platform near them, and the little blighters come to life, and start lining up on the platform. If you then add carriages to your train, if you stop by the platforms, they will hop on, and join you on the journey around your little world. You can also give these little wooden people a destination, by placing a station, and snaking your track to pass it. 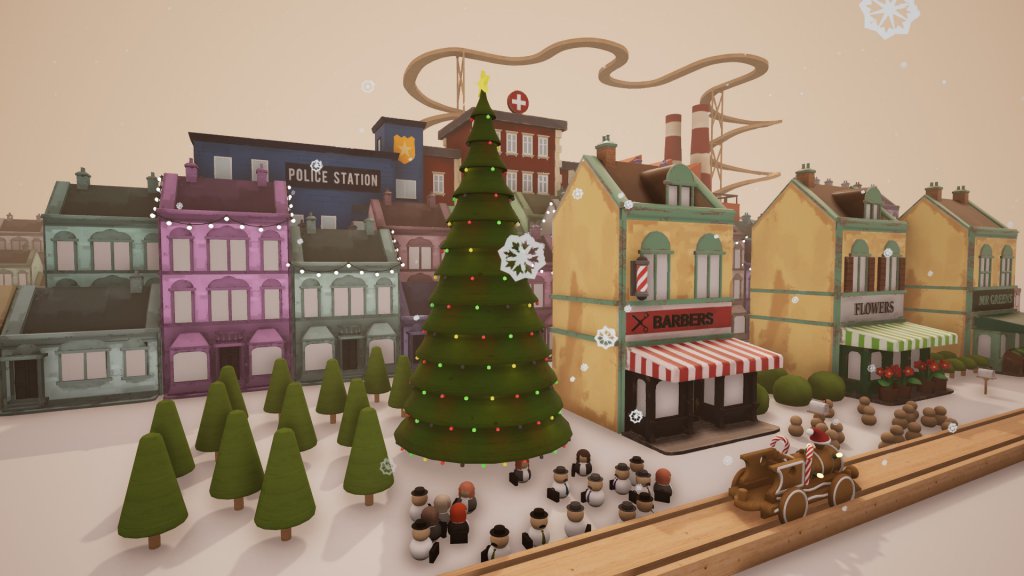 This brings me onto the other mode currently in the game, called “Passengers” and where the game itself shows promise of becoming a more traditional game, as opposed to just a creative endeavour.

Once you choose a level (the empty world cannot be used for this) you will be placed in the world in the standard way. However, small groups of the the little wooden people are placed in the world, and a station is spawned in a random place. Your task is to get the little peeps to the station. Once the first group is delivered to their destination, another group will appear, and you will have to continue your track as to pick those up, and this will keep happening with no end — as far as I can tell. Your track will soon become a twisted mess.

Currently, there are no limits to the amount of pieces you can use to do this, but if this feature was implemented, or some sort of time limit, I could see this becoming an interesting puzzle game. 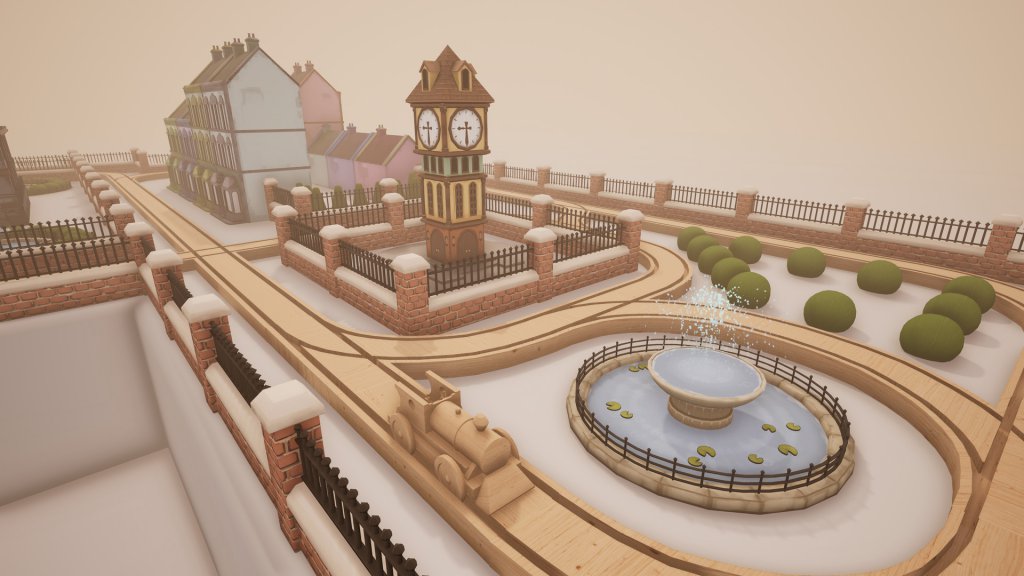 In conclusion, in its current state, it is a fun little distraction that you can pass a few hours on, but with the current limited options, it will not keep you hooked for long. Having said that, it is a fun experience, and with a few additions, I can see this becoming a great title.