I have a long history with Serious Sam. Having played through all the main titles, including the console variants, all of the DLC, and a lot of the spinoffs. Serious Sam 1 HD even had the interesting honour of being the first game I played with my Steam Controller (it was glorious). What started as a simple-ish FPS with silly 90’s humour, has blossomed into a (still fairly simplistic) FPS with maybe early 2000’s humour, just with better graphics. This seems like a negative, but in Sam’s case, it is not. Serious Sam 4 is one of the more refreshing FPS out there in modern times, as it firmly wears its 90’s heritage on its arm. And by that, I, of course, mean, as many guns as you want, and everything is in pickup form: health, shields, and ammo. Serious Sam has kept this formula at the forefront of its gameplay over the years, throughout its various incarnations and remakes, and it is to its credit.

Serious Sam 4 takes this, and runs with it to its logical conclusion, adding a few more features as it goes, taking inspiration from other modern titles, without ruining that classic feel. But let’s start from the beginning. 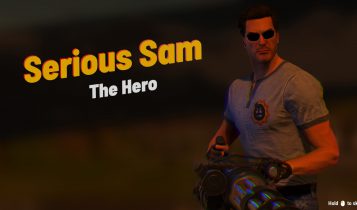 (To keep everything Honest here, I did play through onTourist Difficulty for this playthrough, so experiences may change for you. I like to feel like a badass like Sam Stone is.) 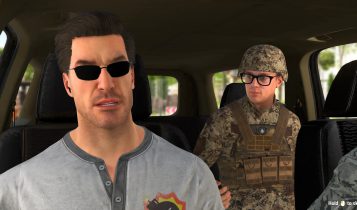 What jumped out at me almost immediately, is that Sam is now no longer alone. I know there were people on radios etc in the third game, but that game played it up and made it the point that we never got to see these people, keeping up the Solo Badass gameplay that you were used to. Not so here. Not only do you have buddies (introduced in small vignettes, similar to how the Borderlands series introduces characters, with a tagline etc), but they are useful. I tested this by hiding (as much as I could anyway) during an arena fight, and these guys took out the enemies, and in fairly swift fashion too. This is a breath of fresh air, and even during a few escort missions, where your buddy does not have a gun, they are scripted well enough to not get stuck, and you can just leg it, and not worry about them getting into any dodgy places. This also has the added upside of Sam’s one-liners, having an audience, as it were, and it’s even written into the story itself, that he is trying to teach a private soldier to make his own. The rest of the crew also make their own, and there is almost a constant stream of banter, and it’s very well written if a bit typically juvenile, but that’s Serious Sam for you. Also, the Egypt setting is a thing of the past, with a very Talos looking Rome, Rural France, and others being the home of the action this time around. 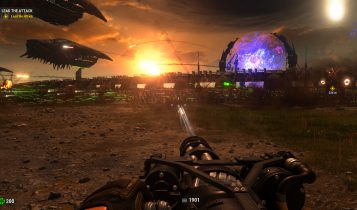 The game engine has had a bit of an upgrade, and the graphics are rather tasty if I do say so myself. But the quality of the graphics is not what’s impressive here. It is NOT hyper-realistic like can be done now, but it does the job. What’s impressive here is the  number of enemies that can be put on screen at once, that puts even Serious Sam 3 in the Dust. The intro to the game sees you up against what must be 1000’s of enemies, and that number is in no way an exaggeration. When you walk into a typical SS Arena, locked behind a door that requires you to kill everything before proceeding, the sheer number of enemies is absolutely stunning, and even on tourist difficulty, ran into troubles sometimes, even though the enemies were rather flimsy, simply down to my terrible aim, and running out of ammo. Another thing to say about the enemies is that they have returned the enemies to a style more similar to how they were in the First and Second Encounter, rather than the, in my opinion, strange changes they made for Serious Sam 3. And most of the old classics are here, the Warebull, Arachnoids, Gnarrs, and the classic Kamikaze — complete with his classic scream. New additions include the Aurigan Haemovore, basically a vampire, with a jumpscare style ability, The Processed Anthropolyp, which is a human that has had the human brain removed and replaced by a colony of polyps that control their nervous system and motor functions, and the Octanian Gamma Troopers, this game’s version of Mentals Military. Many enemies also have specific ways to kill them, like the zealots, who take very little damage from the front but go down very quickly from the back. 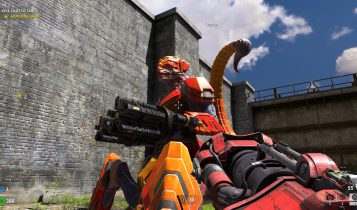 Weapons are your classic selection of weaponry, with what I can see, two new additions, including the auto shotgun, which requires very little reloading. However, these are not the only things available to you to help kill the enemies. There are “Gadgets”, new, unique abilities, usually found in secrets, or obtained from doing sidequests (Yes, quests are here, we will get back to those soon), and have such varying uses as creating a small black hole, stopping time, healing more than usual, etc. These are usually one use only, and you will have to find more if you want to continue to use them. Another addition here is that once again, by doing sidequests, you can upgrade your weapons. There are no choices to be made here, apart from doing the quest or not, and each one will unlock a second firing mode for certain weapons, like the Rocket launcher being able to fire five rockets at once, or the laser being able to shoot a constant beam that will kill anything almost instantly but uses a lot of ammo. This really makes the side quests worth doing.

Also, something you will find, are serious Artifacts of Might (or S.A.M. Points) that enable you to unlock special abilities via an upgrade system. Things that used to be standard, such as dual-wielding, are now locked behind this system, But also, with further upgrades, can also allow you to dual wield things like Rocket Launchers, which is frankly silly. 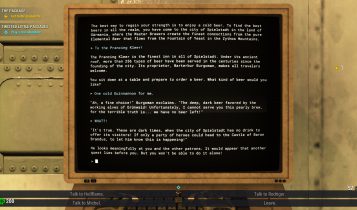 On the point of the quests, the mainline quests are always shown in the top corner of the screen, so you know what you are doing, even after a break, and you will even see a waypoint on the screen, making getting lost almost impossible. I say almost, as the system is not perfect. You can press a button which makes arrows appear on the screen, and show the way on the floor. However, in some cases, these arrows will go up sheer cliffs that you cannot climb, or in some cases, go in the totally wrong direction. This usually happens when you can technically get to a location via two directions, but one is blocked behind a locked door. This did not happen often but did have me going round in circles for an hour at one point. Levers are also HUGE now, and as such, various vehicles have been included, such as a bike, Huge Mechs ( I will not give this one away, one of them is hilarious) and my favourite, a combine harvester. Handy for ploughing down many hundreds of enemies.

In closing, Serious Sam 4 is more that you will love if you loved the previous entries, especially the first and second encounters, and also has enough for newcomers to the series, for those peeps that what something more than Battlefield of Duty XIII, Pork Chops, or whatever the kids play these days.

Serious Sam 4 can be found on Steam.