Bugsnax is an adorable game for all ages

I was enamoured by Bugsnax as soon as I first saw its release trailer, and was fascinated by what I would experience. The first surprise I had was that it was a first person game. And it was a good surprise. As i experienced more of the game I came to realise that it would not have worked any other way. Just for clarification, I played this game exclusively via my Steamlink, on a Steam controller, so will not be going into controls during the review, as my experience will differ from most, but be sure that it is standard FPS-controls fare.

Bugsnax, at its heart, is a quest based adventure game. You are a Grumbus Journalist, who is tasked with going to Snaxburg, on Snaktooth Island, to interview a Grumbus adventurer, Lizbert. Enroute, your airship is attacked, and you crashland on the Island, and your adventure begins. Almost immediately, you start to discover the creatures, or bugsnax, of the island, Starting with the Strabby, a kind of Strawberry, using its leaves as legs. This is one of the least odd bugsnax you can find, so it’s a good introduction to the madness that will follow. 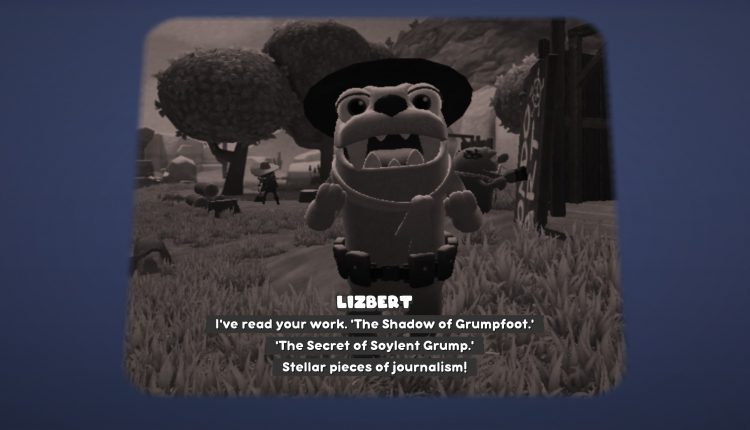 After exploring for a little bit, and working through the introduction to the controls, you find your first friendly face, Wumbus, a farmer, tending his crops. Wumbus will guide you through catching your first bugsnax, and will provide you with his slingshot. He will also introduce you to your first “Sauce” which is used to tempt the various bugsnax into your traps, and that is the main game loop you’ll find yourself playing. You will use the various tools at your disposal to capture and feed the bugsnax to the various residents of the islands, to fulfill the quests given.

Yes, I did mention feeding, as the residents love to eat the bugsnax, and this has a strange effect on their physiology, with their limbs, and parts of the head, changing to resemble the bugsnax that they have eaten. This results in some rather odd looks for the residents over time, as they become more and more food based, but they seem to rather enjoy it. 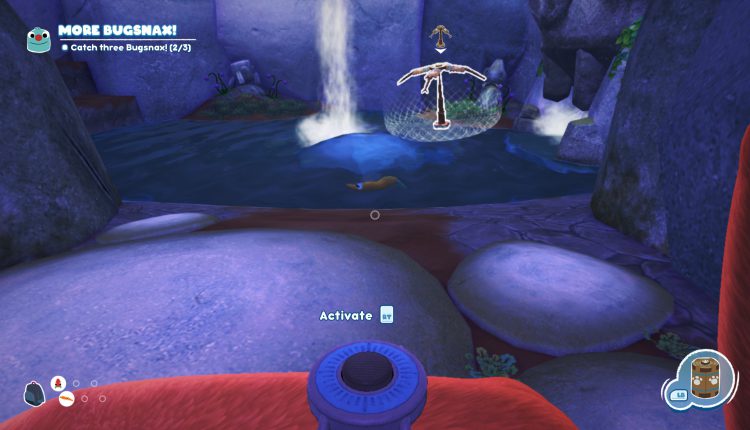 You soon discover that Lizbert has actually gone missing, and Snaxburg is practically deserted, so instead of looking for Lizbert, you are diverted into bringing the former residents back home, and to repopulate the village. This has the affect of you having to, using your journalistic skills, interview each member as they return on the disappearance of Lizbert, and you will gradually gather clues as to her whereabouts. They will also give you a variety of quests, ranging from delivering various bugsnax to them, finding out what people do at certain times, or donating bugsnax to the local farm.

Capturing the bugsnax starts out easy, with the Cage and Slingshot bringing in the small ones, but after you start discovering the bigger bugsnax, you will have to start combining the tools at hand to claim victory. Using the cage on top of a launchpad to fire it into the air, to capture flying bugsnax, or luring another bugsnax, using sauce, to attack another, to be able to grab them… These capture methods are not explained, and it takes a lot of thinking to work out, but it’s all part of the fun. Once creatures are scanned with the scanner, you can look them up in your journal, and it will reveal the likes and dislikes of the bugsnax, as well as other bugsnax that they are afraid of. This often pushes you in the right direction. Six main tools become available to you, alongside the standard net to capture the beasts, to help you catch bugsnax and also traverse the world, including a grappling hook, and the aforementioned launchpad. 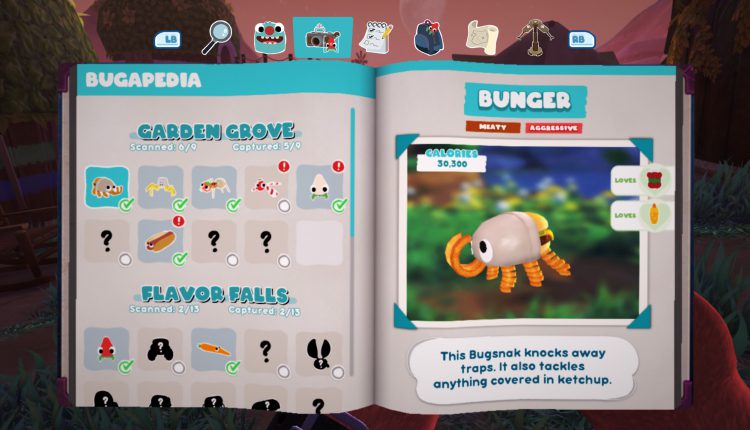 As you gather more quests, you will often find yourself in a situation where you cannot capture a certain bugsnax for a certain quest, so will find yourself backtracking through the various locales. This is in no way a negative, as you always seem to discover new bugsnax as you wander about, as they work on time cycles, with certain creatures only out at night for example, and more spawning as you complete more quests, so it’s always good to explore.

The graphics, while not hyper-realistic, are lovely looking, and the various locales are fun to explore. They cover forests, a rocky mesa, beaches, and more, and all are accessible from the central hub of Snaxburg. Each has their own variety of bugsnax that are native to the region, and former residents waiting for you to coax them home. And the sound is beautiful. The voice acting is also on point, with the only negative I can see, or in this case, hear, is that the music can get a bit repetitive, something of which my wife pointed out. 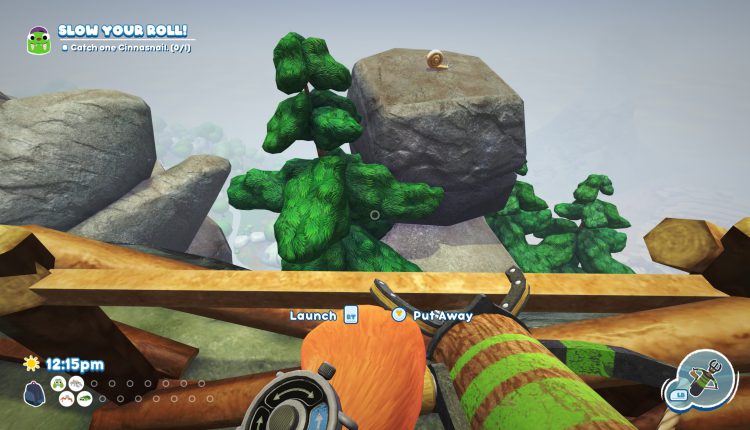 Bugsnax is a great experience, and all three of my kids loved it too. Even my wife was enjoying watching me play it. The names of the bugsnax reminded her of the fantastic Viva Piñata series. I cannot recommend this game highly enough, and for those lucky enough to get one, this game is the first Free Playstation Plus game in November for the PS5, so get on it peeps, you will not regret it.

Bugsnax can be found on the Epic Game Store, PS4 and PS5.