Since the second quarter of 2020, I’ve been playing more and more games with just two players — primarily with my wife and one of our children. Whilst many games work with two players, relatively few multiplayer games scale down well, and so I’ve been looking for more and more dedicated two player games. Reiner Knizia’s Lost Cities is one such game, and better still — I’ve heard it’s one of the best!

As is often the case with Dr Knizia’s games, Lost Cities is deceptively simple. Inside the box, you’ll find nothing more than a deck of large cards, a narrow double sided board and an instruction pamphlet. There are two modes of play that relate to the two sides of the board, with the regular side showing five coloured spaces and the long game side showing a sixth. 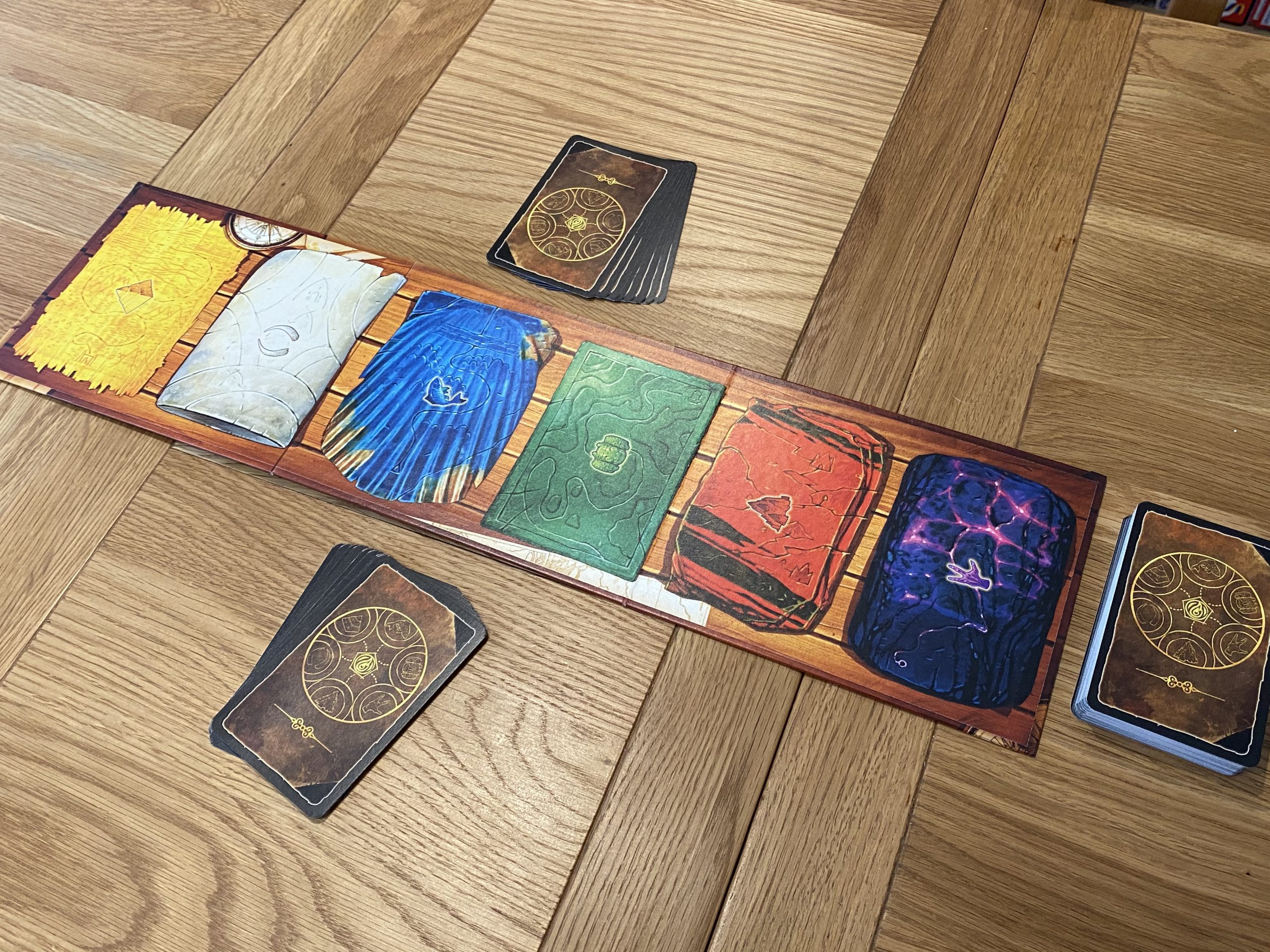 If players choose the short game, they must also exclude the ten cards relating to the purple coloured space that is not present on the regular side of the board. Aside from this one nuance, there is no difference to how the game plays in either mode. If playing by the default rules, the players will always aim to win two rounds out of three, but a single round can be enough, or you may just as well go best of five once you’re playing at full speed.

The objective of Lost Cities is a very familiar one — to score the most points at the end of the game. This is achieved by investing in each of the five (or six) different coloured spaces, each of which is a completely abstract representation of a different expedition. Broadly speaking, there’s a jungle one, an underwater one, one set in the desert and another in ice, with the final one on the normal board having a volcanic theme, and the sixth space on the long game only showing purple “alien” iconography.

In short though, these expeditions are not unique in any way, except that each has its own colour and symbol for the purpose of recognition only. In the single deck of cards, you’ll find twelve cards per colour — the numbers two through to ten, then three “wager” cards. These cards (for all five or six colours) are shuffled together, and each player is dealt eight of them to form a starting hand. 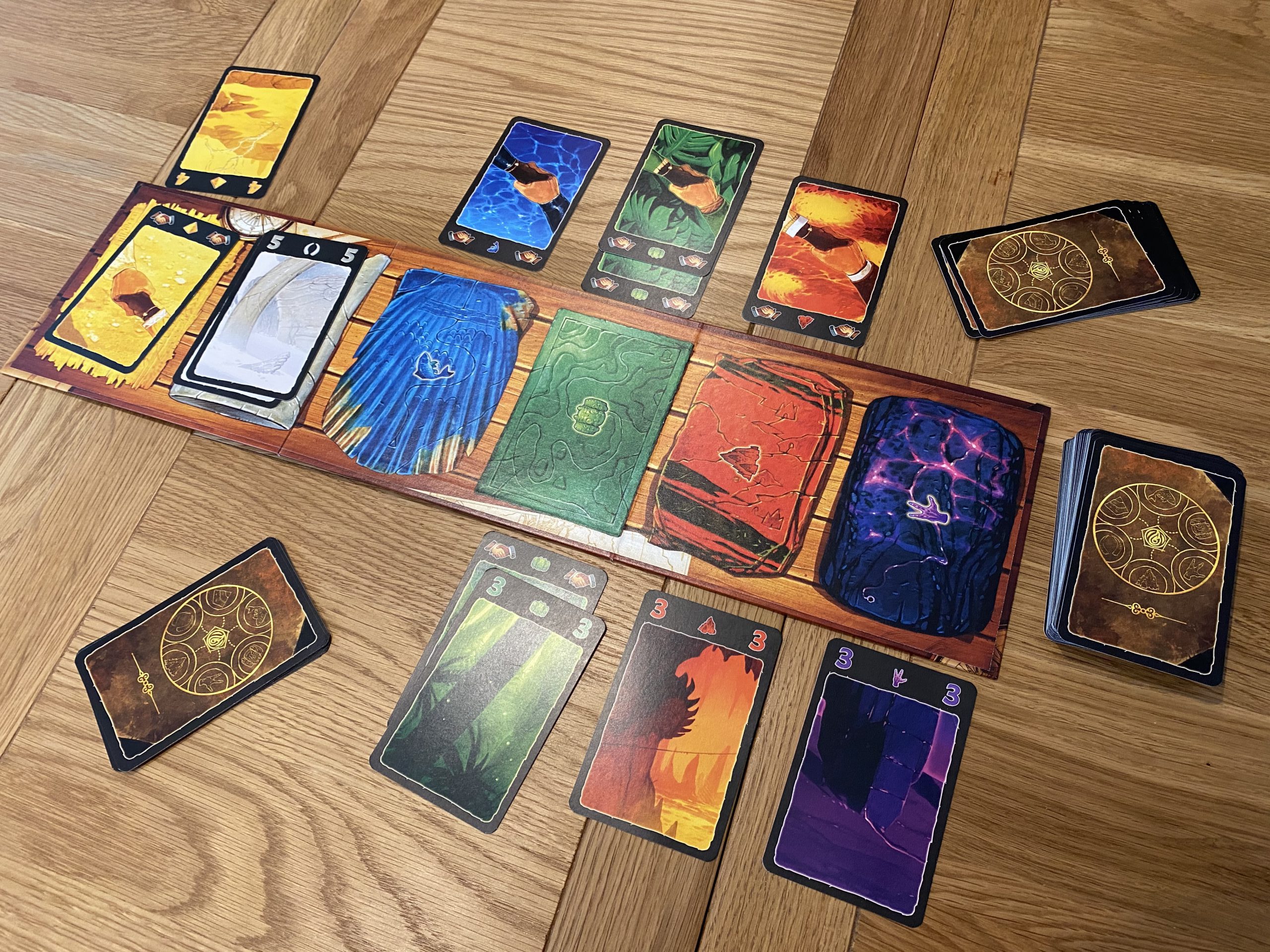 On a player turn, they simply choose to play one of their cards onto their side of the table in association with an expedition of the matching colour, or they discard a card by placing it onto the board space showing that colour. The player will then draw a card — either from the face down draw deck, or from one of the face up expedition piles on the board.

This is all very mechanically simple, but a couple of small rules open up a lot of complex decisions that really make things interesting. The first of these is that cards being placed onto an expedition must be in ascending order — so if you place a four on the yellow expedition, then you won’t be able to place a two or three later in the game. The second (and perhaps most critical rule) is that when a card is placed onto an expedition, that expedition immediately generates a score of minus twenty. 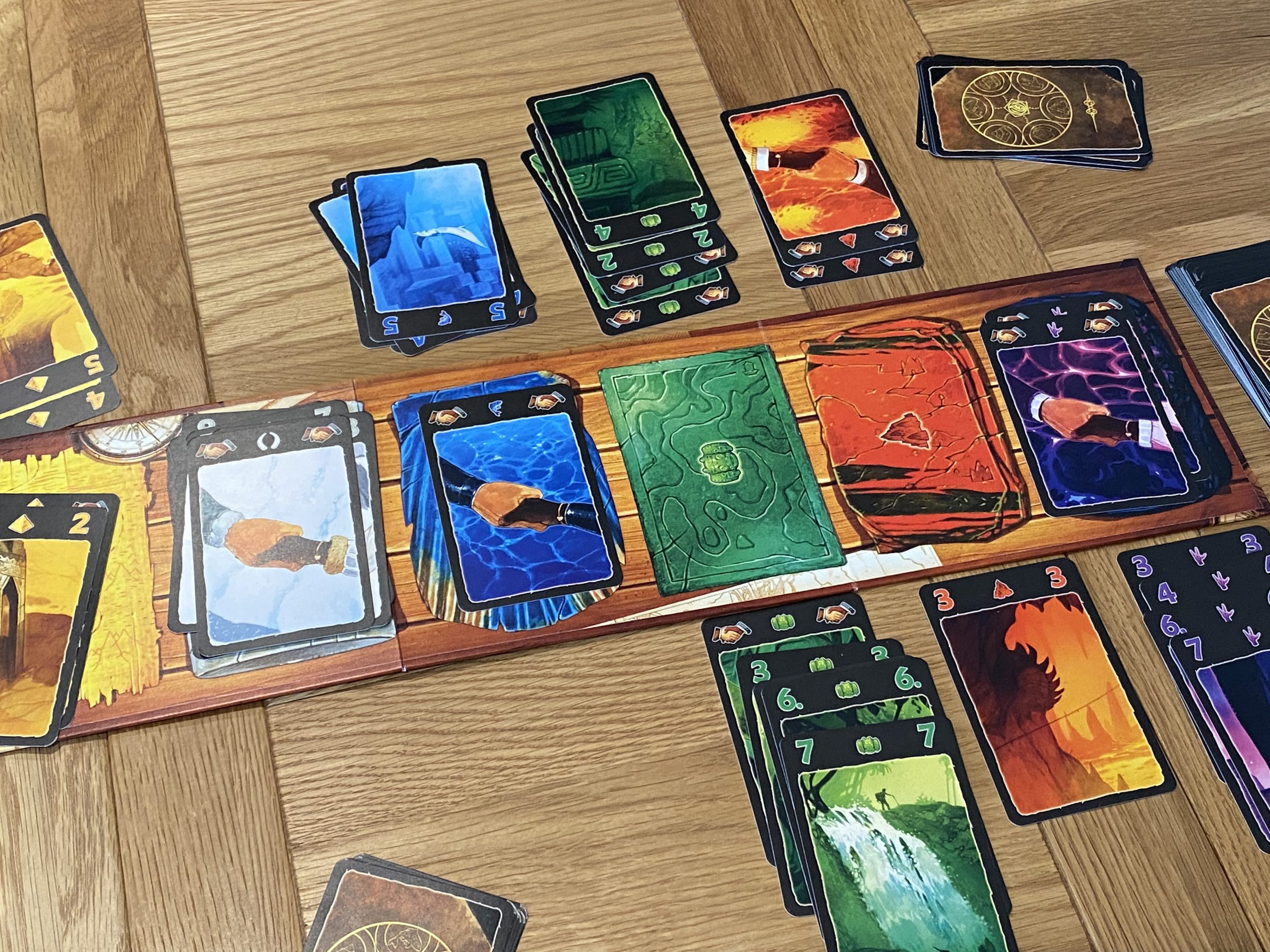 When combined, these rules effectively mean that players will want to play low scoring cards onto expeditions initially (forcing them to commit) whilst at the same time, if they cannot get their hands on the higher point cards, then they will likely make a huge loss — thematically recognised as the “expedition cost.” These elements work beautifully with the discard mechanic, which forces players to throw away cards of low to medium value (to them) into the middle spaces, often giving those cards to their opponent at a time to benefit them. The trick, of course, is to discard such cards after the opponent has already played a higher number on their side – rendering the card useless.

There’s another twist as well, in the form of the wager cards. These cards can double, triple or quadruple the score (whether positive or negative) of an expedition, based on how many are placed on your side. The challenge is that expeditions can only be placed before any other cards, so the more you commit to the expedition of that colour in terms of wager cards, the more risk there is that you’ll take a major loss that you don’t have time to make up for.

The fact that players have a hand of eight cards may make you guess that you’ll always have an easy option, but that simply isn’t true. Rather, you’ll want to use most of your hand to gather cards that you really want to play later on — perhaps because they are high numbers of a certain colour and you want to see the lower numbers first, or maybe because you have lower numbers that you’d like to place, but were hoping for a wager or two first. 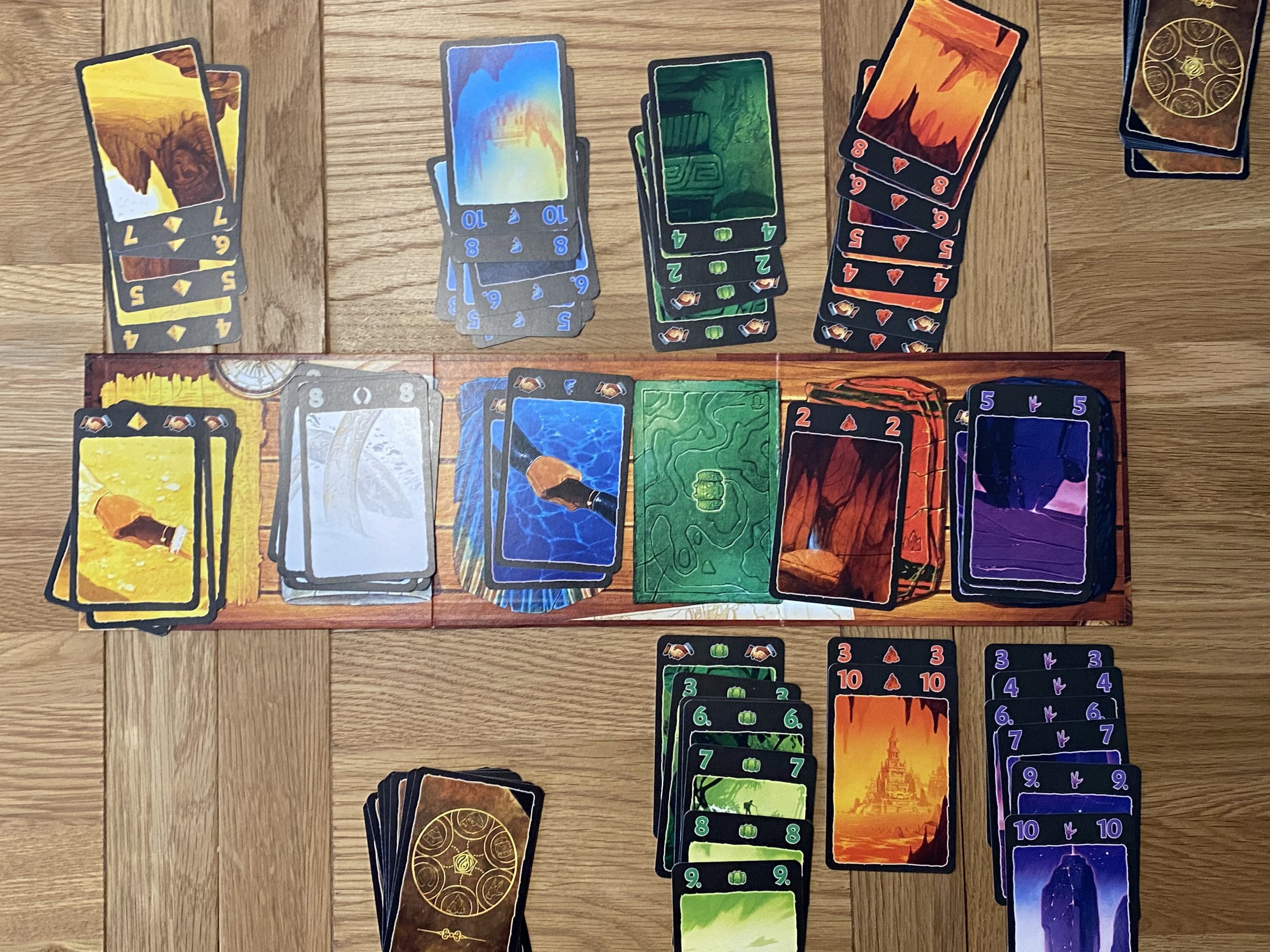 You can’t hold them all though, and the reality is (especially in the shorter game) that both players will compete directly for one or two expeditions, whilst a couple of others will end up uncontested. In some head to head games, this could leave a huge hole in the gameplay, but in Lost Cities, every card matters and choosing to discard a low card in an expedition you weren’t interested in can suddenly activate your opponents plan.

When you bring this very simple gameplay together with the hidden depths that the structure of Lost Cities offers, it becomes easy to see why this is considered an all time classic. Decisions – simple as they may appear — feel as though they have weight, and even with just a game or two under their belts, players soon realise that Lost Cities is as finely balanced as any game out there with fsr more components and much more complicated rules. 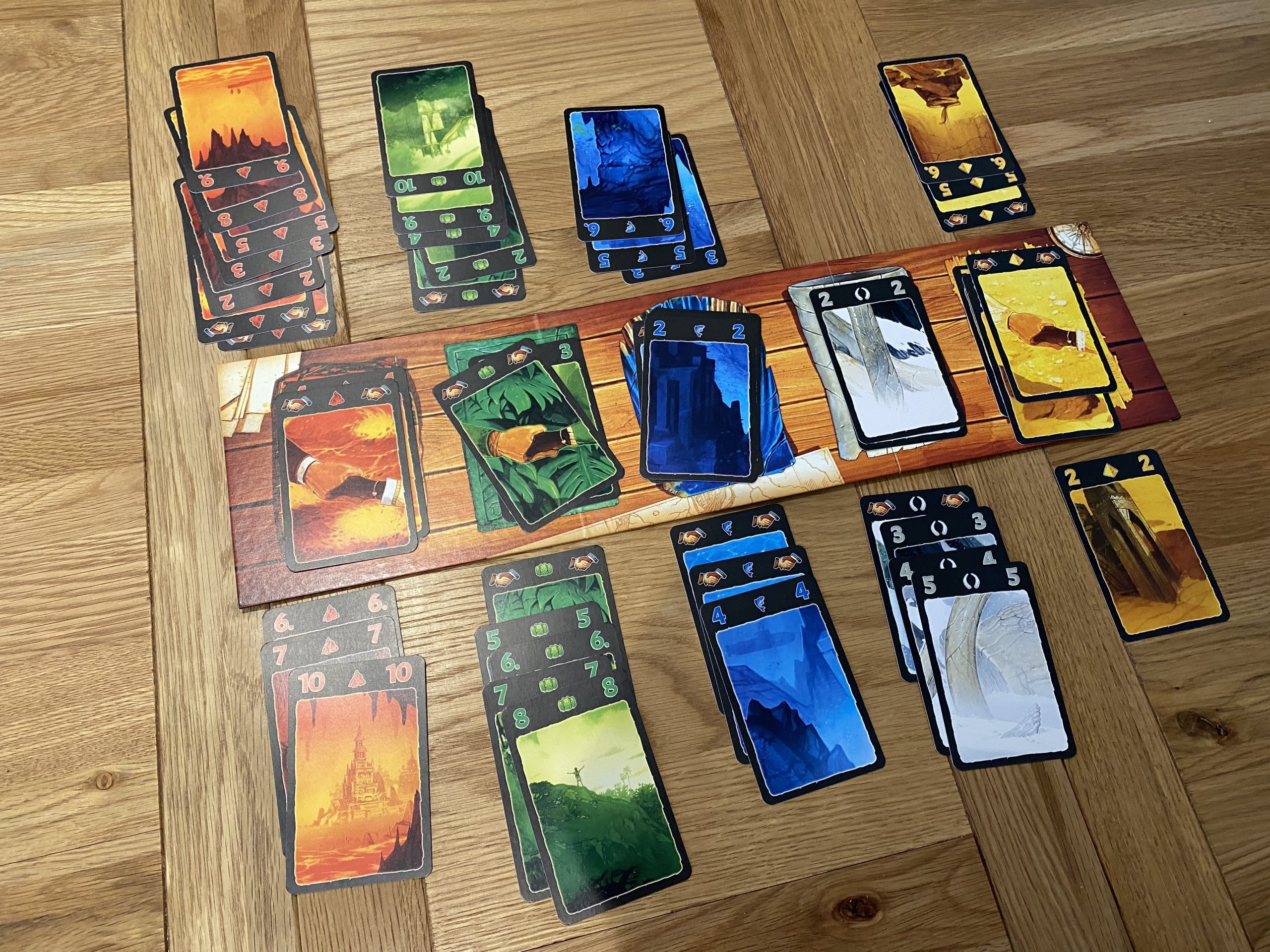 Given the low price point and small box footprint, I think Lost Cities is a game that belongs in the collection of any family who regularly play games in pairs. Whether played between adults, or between a parent and child, Lost Cities is simple to learn, and has enough depth to keep anyone entertained. There’s a real opportunity for high level play which brings replayability as well.

Lost Cities can be found on Amazon.