Evergate is a tough platformer that pushes players to make split-second decisions in order to survive in a beautiful but dangerous hand-painted world.

In Evergate, you play as Ki, a soul who is supposed to be reincarnated thanks to the power of the gateway known as the Evergate, but before they can be sent back, they are tasked with discovering who they were and why they are there. Books that the gate provides contain memories, which offer a glimpse of Ki’s previous life and serve as a portal into the levels and get more complicated as you dive deeper into their pages.

As a puzzle-platformer, Evergate does a great job setting itself apart with a unique traversal system, which can both delight and frustrate players. Ki uses the Soulflame, which is a beam of light that uses crystals to launch you from one platform to another. In order to use a crystal, it has to line up with a glowing white area on a wall, and shining the Soulflame through the crystal will allow you to activate the boost. Your Soulflame also slows down time, giving you a better opportunity to set up your path. It’s a simple yet clever mechanic that makes the game feel fluid and fun, and every other puzzle mechanic stems off from it, for better or worse.

Ki’s Soulflame can also activate other items in the spirit world, in order to help them on their journey. There are items that, when activated, will form a platform underneath you, saving you from a perilous fall. Other items are an hourglass that swaps Ki with the platform you used and fire crystals that burn obstacles away, and many others. Each one of these items is well-designed and provides nuances to the game that make each level feel fresh and wondrous. 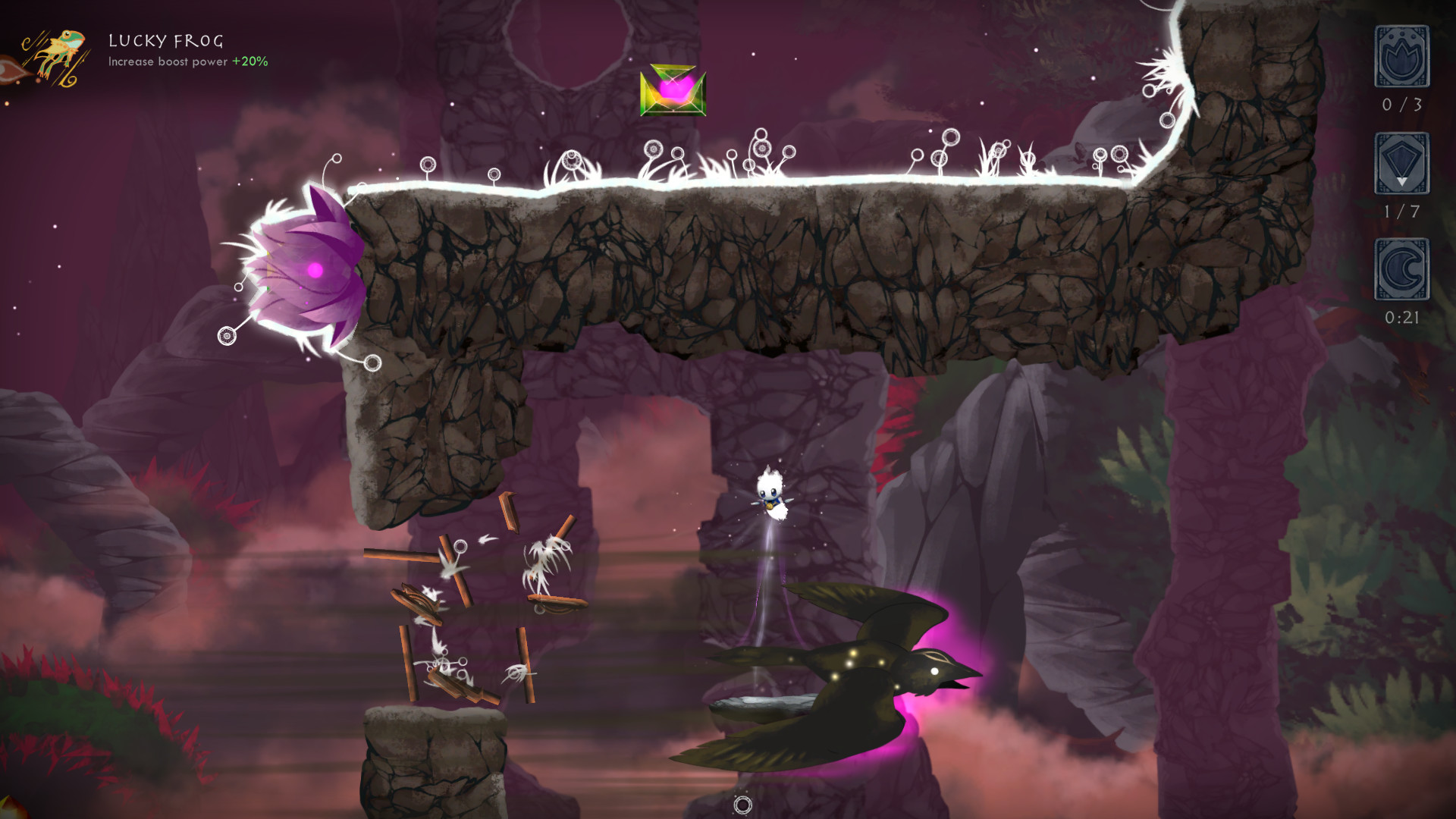 Trial and error will get you through the majority of the game’s levels, but there comes a point where you have to be both on top of the controls and the layout of the platforms themselves. With spikes, crumbling floors, and all manners of obstacles, it’s often a situation of wayward falling and praying that you are at the right angle to activate a crystal and keep yourself from succumbing to your fate. Luckily, errors come at only a small price, as falling to your death merely resets the level and if you get stuck, you can manually reset it, too. Levels are relatively short, so you’re never too inconvenienced by a misstep, but it can seem frustrating if you’re just about to complete the level you’re on and miss the last jump.

While you may or not be smitten by Ki’s platforming abilities, you’ll undoubtedly fall in love with the art in the game. Each level serves as a portrait of a gorgeously crafted afterlife and is filled to the brim with exciting background elements, particles, and awe-inspiring scenery. This beauty is further accentuated by the wonderfully-crafted, cinematic soundtrack that punctuates every scene with a score fitting to its surroundings. 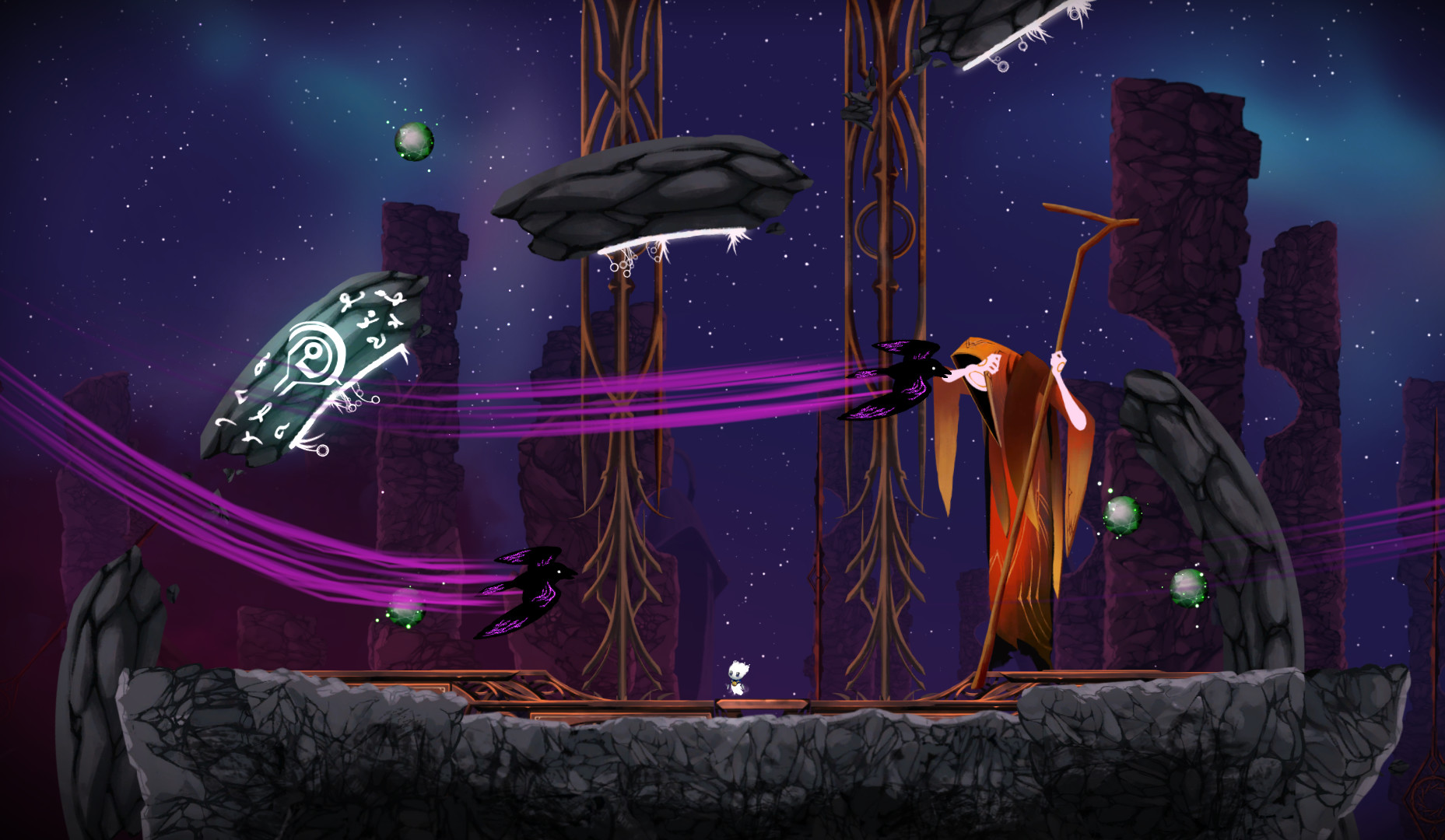 Replayability is high in Evergate, thanks to the collectibles scattered around each level and the built-in speed-running features. You’ll have a handy guide of how many collectibles you’ve gotten on the side of the screen, along with a timer telling you how long you have to hit the top time in the level. The pause menu also provides you additional details about your best time in the level and how many total collectibles you’ve retrieved in that area. It’s simple, but sure to keep someone’s attention who loves getting 100% in a game.

Evergate is a great game for platforming fans who are looking to play something new or puzzle fans who want to try their hand at something a bit more fast-paced. It nails the artwork, the music, and the simple but effective story and manages to create a new game that might be polarizing with its difficulty but certainly worth working at when another try is just a button press away.

Check out Evergate on the Nintendo Switch or PC. There’s also a demo!