‘Twas the night before Christmas, and all through the house, nothing was stirring except for…. the rattling of dice! the cheers of enraptured friends! the sloshing of wine and the crunching of cheese-flavoured corn snacks! That’s right, folks, it’s almost Christmas and what does Christmas mean? As a great Cimmerian warrior was once asked, “What is best in life?” Well, board games, snacks and copious amounts of alcohol, of course!

Welcome, welcome! to the first of two special Big Boss Battle features about board games. First up, we’re looking back at five of the best light–to–mid-weight games we’ve played this year, plus a special bonus game that we haven’t reviewed yet, but which we think is well worth your attention. Whether you’re buying for presents or just want to add to your own collection this Christmas, you won’t go far wrong with any of these beauties. 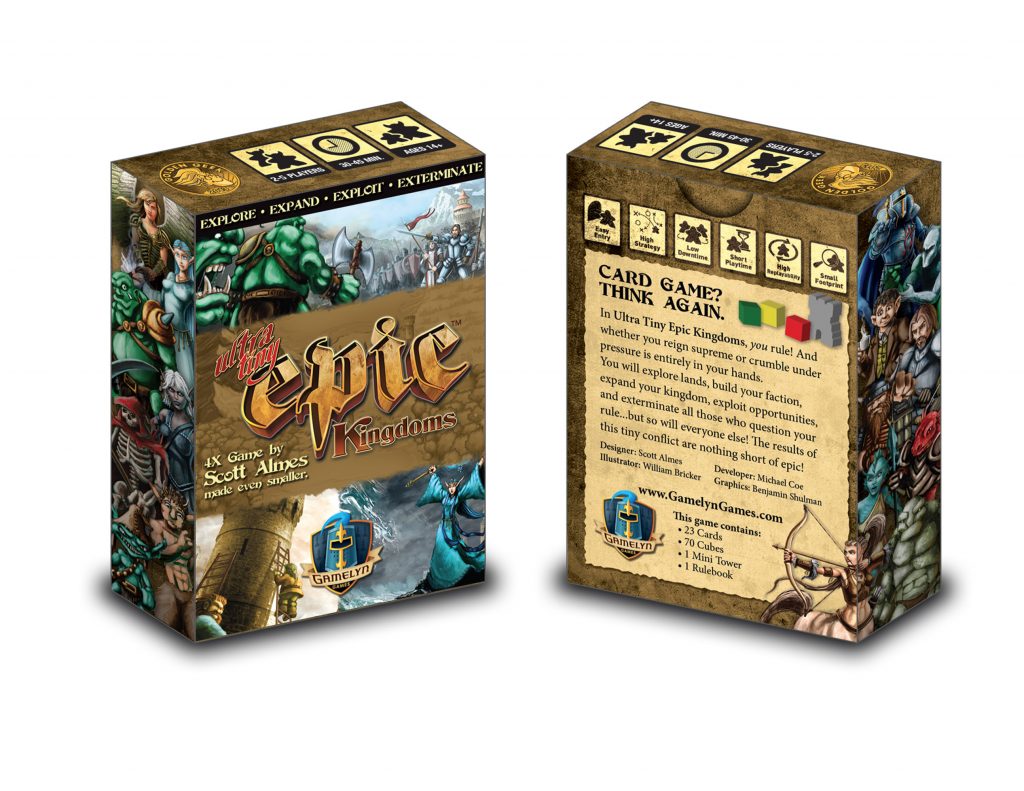 Ultra Tiny Epic Kingdoms, an even further miniaturised version of Tiny Epic Kingdoms, manages to distil some of the best elements of 4X games and Euro-type games into a (relatively) short and enjoyable experience. Somehow the little (barely larger than a deck of cards) package manages to include not only multiple paths to victory, but a wide selection of monsters and races to play as, each with their own play style. We’ve managed over a dozen games and yet new techniques and tactics are still coming into play as members of the team find their groove within the game’s structured ‘partake or gather’ turns. We will no doubt continue to play Ultra Tiny Epic Kingdoms even as we make the time to play longer, more advanced titles in the years to come.

We haven’t reviewed Ultra Tiny Epic Kingdoms yet, but as soon as we do, we’ll shout it from the rooftops!

Ninja Dice has, since the first time we played it, become a staple amid the ‘warm-up’ games in the B3 selection. Not only does it include rules based around the direction the dice are facing when they come to rest, but it also includes a player versus player stealing mechanic alongside the game’s core ‘push-your-luck’ mansion-pilfering gameplay. Although Ninja Dice only contains enough tokens to play effectively as a four-to-five-player game, it is so balanced and well contained that grabbing a second copy of the game allows double the players and some very, very elaborate heists — and few games can claim that.

Of all the games here, Dice Forge packs perhaps the most impressive amount of stuff into its relatively svelte box and it even does so in style, letting players store the game already set up for the next session. All that stuff isn’t just filler, either; it’s a veritable banquet of delicious components which allows players to collect resources, defeat monsters during heroic feats and, ultimately, craft their own pair of unique dice. Simple, fun and extremely tactile, Dice Forge is a delight for younger gamers, their parents, friends and just about anyone else.

Quadropolis is the perfect game to make its way onto a list like this, because ingeniously, it includes two very different modes of play. The first of those uses a simplified scoring mechanism that means budding city planners of almost any age can get involved, whilst when using the more complex board, only experienced architects need apply. With great looking components and lots of different ways to win, Quadropolis joins a whole host of other Days of Wonder products that can easily be considered an excellent fit for less experienced gamers.

As the second moderately complex game in this list, there’s no doubt that Near and Far fits the billing of a contender for best mid-weight game to have been released this year. It has a wonderful storytelling theme which can be enjoyed in several different ways and whilst it includes legacy features, they are not essential and can be replayed over and over again. With wonderful artwork, no combat or “take that” mechanics and fairly straightforward gameplay, Near and Far is a game which will suit any family with around two to four moderately committed gamers.

The BigBossBattle.com review for Near and Far can be found here

Azul is the most recently released game on our list, but even so, it jumps straight in at first place thanks to its beautiful aesthetic, tactile components and  fast-paced, easy-to-learn gameplay. Azul is a game for players of all ages and ability levels and, like Quadropolis, it features two variant modes which enhance the complexity of scoring and offer additional replayability. It’s a relatively cheap game as well, proving that the old adage about good things coming in small packages often rings true even today. A must have for any board gamer out to entice friends and family during the festive season.

The Big Boss Battle review for Azul can be found here.

Here at Big Boss Battle we are passionate about games of all kinds and if you liked this Year in Review feature, check back next week for a look at the best heavy games we played this year. You can find all of our tabletop news, reviews and features in the tabletop section of the site, which can be found here.

With the exception of Ninja Dice and Ultra Tiny Epic Kingdoms, review copies were provided for all of the games in this list and can be purchased via 365 Games or through one of the shops found in this handy Store Locator.