If you’re looking for a game that players of any age between about ten and over a hundred years old can play, then you can’t go far wrong with Azul. The latest release from Plan B games (who also brought us the equally accessible Century: Spice Road), Azul features a tactical tile placement theme which claims to have been inspired by Portuguese King Manuel I’s love of Moorish azulejos mosaics, as seen in Spain’s Alhambra Palace. Each player takes on the role of one of the Kings artists, then each of them compete to win his favour with the most complete recreation.

Now, like the azulejos that it is derived from, the first thing you should know about Azul is that it is a beautiful, beautiful game. It looks absolutely gorgeous on the shelf and even more so on the table, but perhaps more importantly, it even feels gorgeous to play. Two to four players each have their own empty mosaic board which, as the game progresses, will have more and more chunky, eye-catching tiles situated on it. The tiles themselves are large, rounded and weighty, which makes collecting them from the central storage disks a really tactile part of the game that feels like a reward in itself.

The objective of the game (as you may have guessed) is to place tiles on your own board in a particular way to score points, but it isn’t as simple as drawing tiles and simply putting them wherever you want (although each board has a variant game on the back that kind of allows for that). Oh no, instead, players must complete “Pattern Rows” of between one and five tiles during each round, and only at the end of the round can a single tile from each completed Pattern Row be moved onto the mosaic board for scoring. Points are awarded for individual tiles moving over, but extra points are given for both horizontal and vertical adjacency.

Of course, there is much more to Azul than simply picking whatever tile you like and placing it conveniently at your leisure. Instead, a number of circular “Tile Factories” are placed in the middle of the table and the player with the first player token for that round must delve into the lovely printed bag to draw four tiles for each factory, which he or she then places. The factories live in the centre of the table, and each turn the active player must pick all tiles of a single colour from one factory, or from the surplus pool placed in between then. How is the surplus created? Simple: when a previous player picks tiles from a factory of one colour, he or she then places the surplus tiles into the middle. At some point, therefore, there are enough tiles of a single colour in the surplus that it becomes compelling enough for a player to delve there, at which time they must also take the first player token for the next round, which is worth minus one point in this round, but does (obviously) allow them to pick first next.

The way in which tiles are selected is only the first puzzle you’ll need to solve in Azul, however, because even though your Pattern Row resets each round, tiles slide over onto the adjacent mosaic and remain there until the game ends, but each space can only be filled once. This basically results in the compounding of multiple pinch points as the game goes on — you’ll be ever more pressed to place only tiles that your mosaic lacks into your Pattern Row, but only on rows where there is a corresponding mosaic space to slide them into. Sometimes you’ll tactically take excess tiles just to complete a row that you really need. In all cases where you end up with excess tiles, you slide them to a negative score track called the “Floor Line” which thematically represents tiles being chucked on the floor, presumably in some kind of artistic flounce.

Because of its simplicity, turns in Azul are brief, lasting on average just a few seconds. The only time when players might need longer to consider their actions is when the player immediately before them makes a choice that affects them, which is probably the only remotely confrontational aspect of the game. It’s certainly possible to disrupt opposing players from scoring from time to time (both accidentally and deliberately) but the consequences of such actions will rarely result in making the round a complete blowout for that player. Because the turns are brief, the games are also relatively short, meaning that your first game of Azul is unlikely to last beyond an hour, whilst subsequent games will be between half and three quarters of an hour.

Azul is also mercifully simple to teach as well, because whilst some aspects (placing tiles on the Pattern Row and the mosaic, then scoring) are complex, the game is split into very straightforward phases which can be tackled one at a time. You’ll never have to explain multiple complex actions like you might in a worker placement game and you won’t need to worry about rule-breaking mechanics like random card draws or special abilities.

This lends Azul a distinct gateway game feel, yet personally I enjoyed it a lot more than I like most other games that fit this category. Not only does it look and feel good as I said earlier, but it also has some satisfying mechanics, a great combination of solo and communal puzzle solving and a good variety of ways for players to score points even with the simplistic structure of the player boards. No complete round is ever a washout as long as you remain at least somewhat focused on the tiles you want to fill and no matter what other players do, you’ll always have a chance to do so except for in rare moments of incredible bad luck. There is also no hidden information, so runaway leaders are generally hard to find as long as everyone has a reasonably similar experience level. 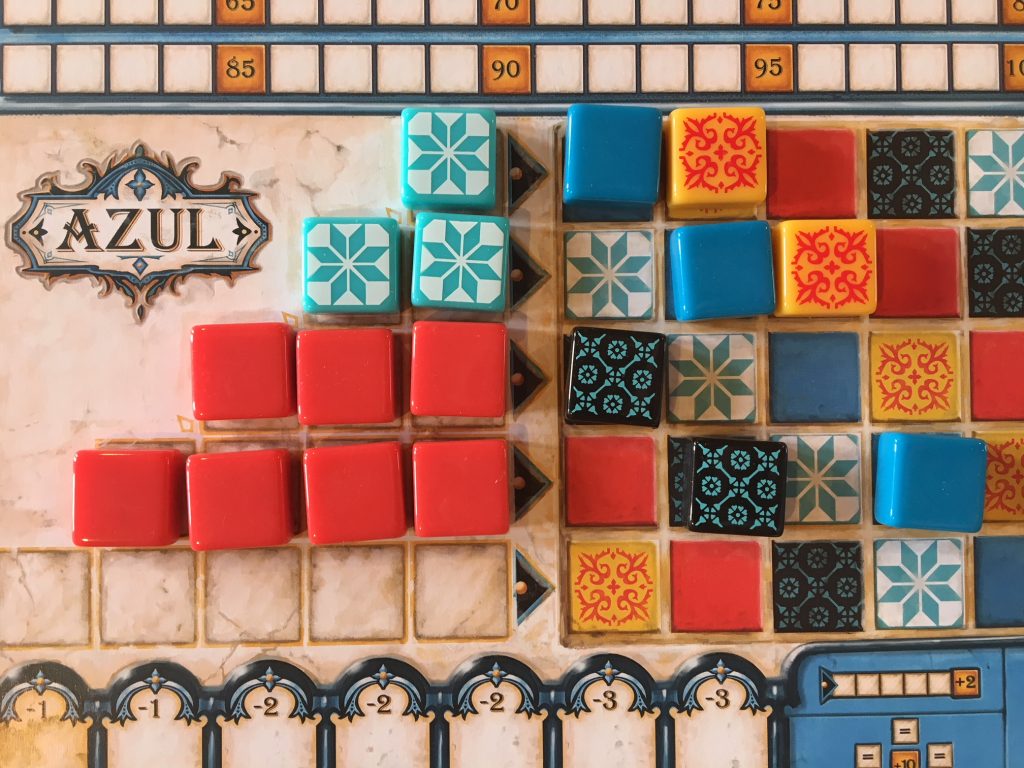 So comfortable am I in the ease of teaching and learning Azul, and so convinced am I that it is suitable for basically anyone to play and enjoy, that there is probably only one other game I’d rank alongside it as such an exceptional gateway game. That other game is Century, the other 2017 game from Plan B. I can’t help but wonder if this is a genre that the plucky newcomers in the market intend to focus on, which can’t possibly be bad news for us gamers, can it?

If it wasn’t obvious enough already, I highly recommend Azul for anyone with the remotest interest in lighter, more colourful and more cerebral games that rely on wit, a certain amount of planning and the ability to respond to unexpected sequences of events. I genuinely mean it when I say that almost anyone can play it, and I can’t think of a better option for filling up the stocking of a good friend or relative this Christmas.

A copy of Azul was provided for review purposes and can be purchased via 365 Games or through one of the shops found in this handy Store Locator.