Near and Far is a storytelling and victory point collection game with a lighthearted but extremely strong adventuring theme running throughout. It’s a game for two to four players, and each game usually takes between one and two hours, with the sweet spot being about ninety minutes for a couple of novice players, or four experienced ones.

The artwork in Near and Far is a standout feature, and whilst the bright, simple colours and painterly style will appeal to children, the game is at least moderately complex, and there is lots of reading. I’m estimating a bit, but I suspect players younger than seven or eight years old might struggle to be competitive, but that doesn’t mean you can’t have fun reading with them, helping them weigh up decisions and planning their adventure.

Even though I am a relatively mature board gamer, I couldn’t help but be impressed by the components in Near and Far. The box is chock full, and includes a beautiful binder containing eleven maps, a town board, four player boards, a large and well written story book, a handful of standees and a ton of tokens, gems and cards. Everything is on theme, and I think the use of cardboard rather than plastic (except a bag of gems) has really enabled the design team to pack a lot of content into the game whilst retaining a reasonable price point. 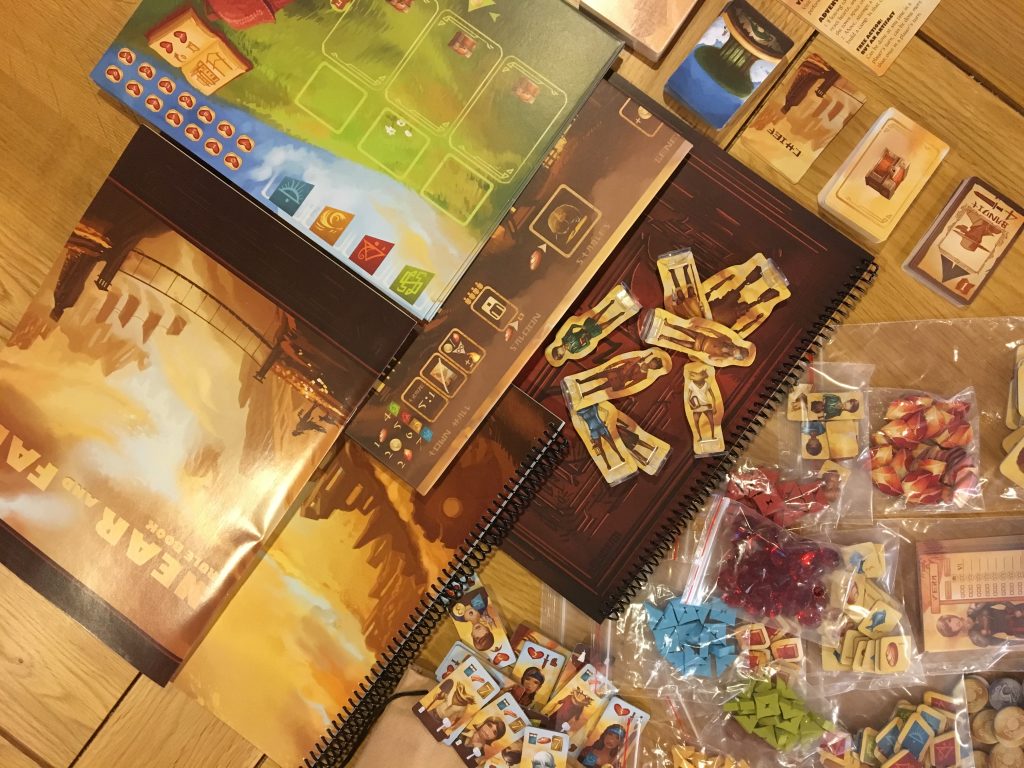 On that note, Near and Far actually has three different modes of play. Namely, these are Arcade, Campaign and Character, and each of them offers subtly different ways to play, and requires differing levels of commitment from the players. Arcade mode, for example, allows players to setup a game quickly and use a deck of random adventure cards rather than the much more in depth story book. Campaign mode is the opposite, using the most complex combination of components and requiring the players to keep track of a named standee using an included character sheet.

In any mode, Near and Far is simple enough to play, but there are many ways to win and many decisions to make. In short, the winner is the player with the most Journey Points at the end of the game, and these are accumulated through achieving various things over the course of a game. Expanding your party, achieving the criteria set out on certain cards, placing tents and mining or trading all accumulate Journey Points. Like most victory point driven games, you probably won’t be able to focus on achieving all of these things in the same play through, and there is no strategy that is obviously more powerful. 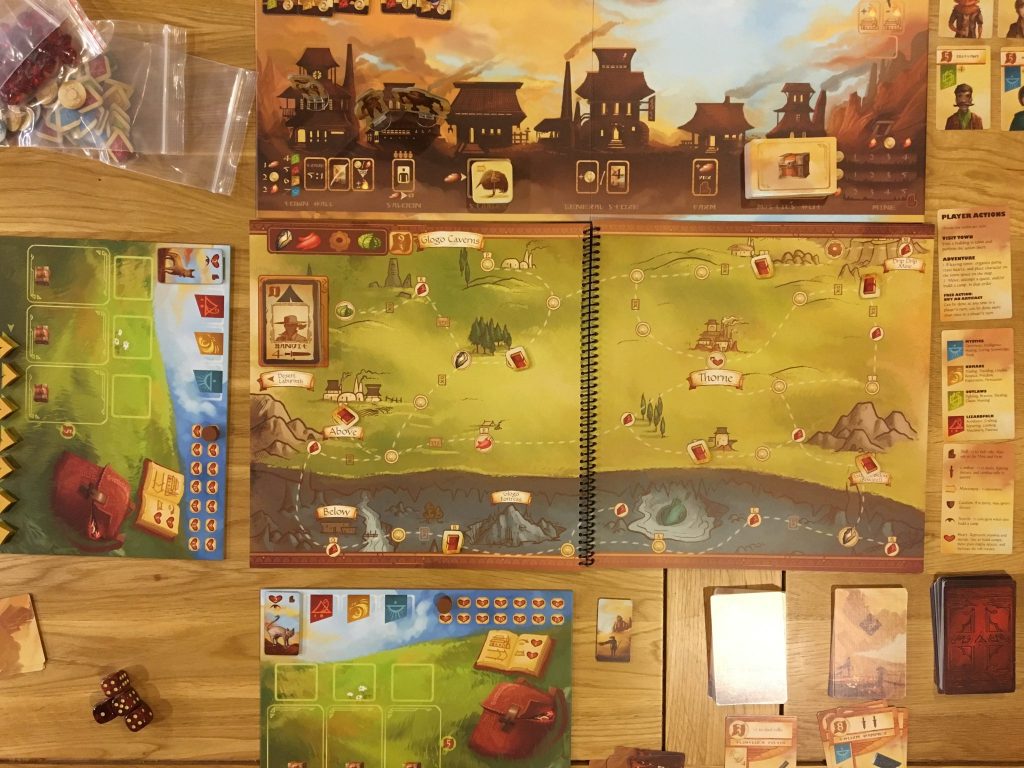 Actual gameplay is split between the town board and the current map. There are several actions available in town, including hiring adventurers, farming, obtaining pack animals, mining, drawing cards and trading. Taking any one of these actions constitutes a whole turn, so as you can imagine the game moves at a pace. When players set out from town, they use their own board to track a number of hearts that is equal to the total number of hearts among all of their party members, and more hearts allows further distances to be traveled.

Turns outside town are slightly more complex, but it’s still just a case of move a bit, sometimes read a story sequence or adventure card, then perhaps pitch a tent. Occasionally there will be bandits to fight, and quests can lead to interesting decisions or consequences, such as (in campaign mode in particular) picking up a permanent buff or debuff that applies to certain situations. 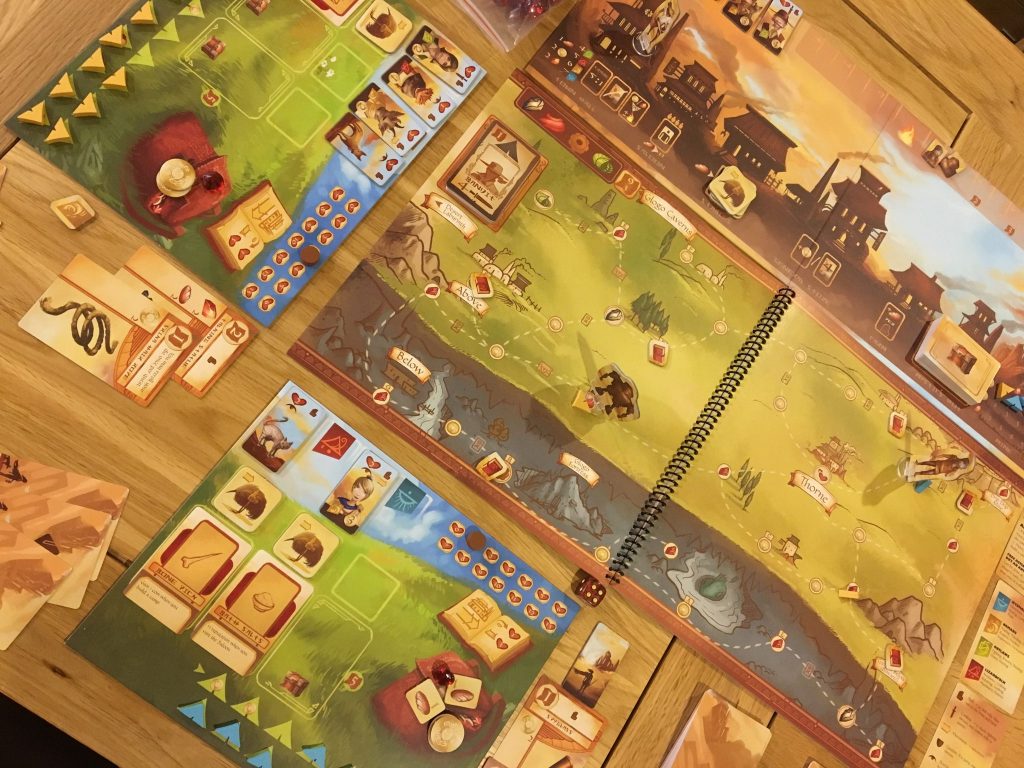 As I said earlier, Near and Far is fairly appealing to children, and one feature which supports that is the lack of direct confrontation. Dueling between players is possible in town if the current player wants to use a facility that is already occupied, but it is simple and the possible outcomes are low risk and fairly low value. Simply put, if the attacking player loses, he or she will basically miss that turn, whilst if they win, they can use the facility. In any event the defender is never penalized. In all honesty I think this mechanic is poor, and I’m surprised (given the range of other modes) that there isn’t an advanced combat system that takes into account party strength, artifacts and other features that already exist in the game. You guys know that I love a house rule or two, so maybe I’ll create one?

Aside from these duels, there is no real take-that in Near and Far. Players are usually attempting to fulfill the objectives of cards they hold, and although these are initially obtained via a simplistic drafting sequence, there is no public competition to complete them. You may occasionally pitch a tent on a mining spot, trade route or quest that someone else wanted, but there isn’t much on any of the maps that will generate a significant amount of heat from several players at once. 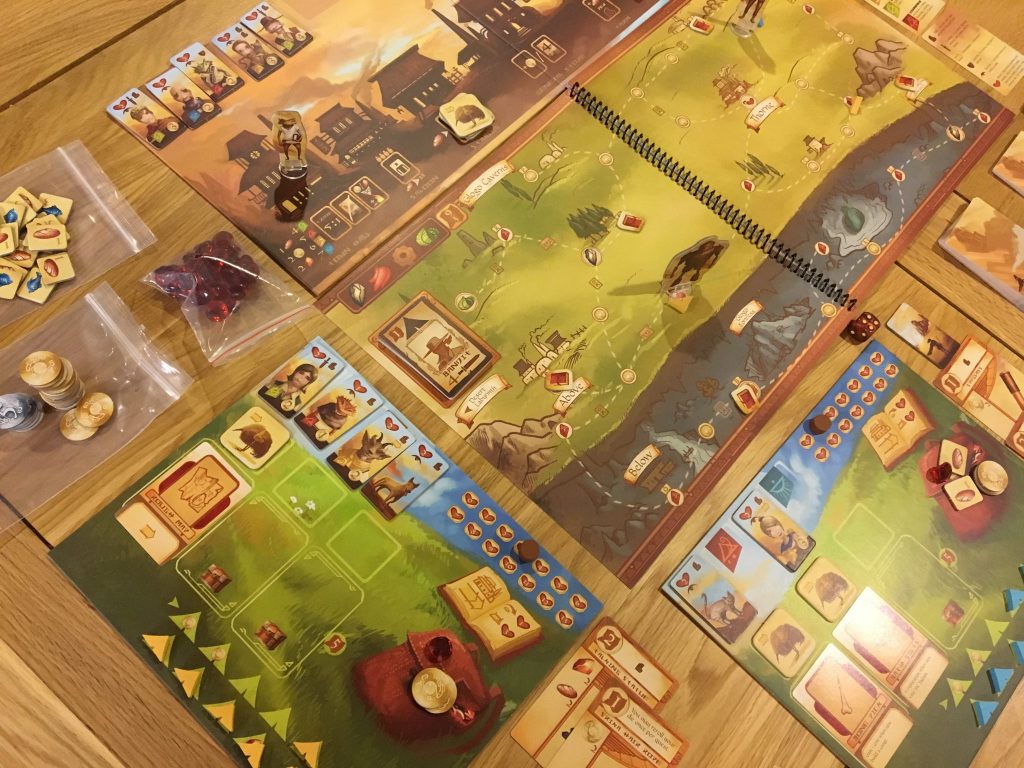 The speed of play in Near and Far, combined with such a wide variety of ways to win make it an attractive proposition for casual board gamers who meet regularly and families of mixed age. In particular, I like that it has perhaps the most accessible campaign mode that I’ve yet to come across. I can genuinely see a group of players coming together to play Near and Far several times over a few weeks, or even completing a couple of games in a single session, which would be much harder to achieve with a game like Gloomhaven, for example.

The enjoyable gameplay, variable modality and exceptional component quality are all underpinned by solid mechanics that are hard to break, ensuring that gameplay is always fun, fair, and once everyone is up to speed, competitive. Near and Far is an instant favorite in my household, and is popular with everyone that has played it. With Christmas fast approaching, it is the ideal game to break out with the family, rather than that tired old copy of Monopoly that everyone hates anyway!

A copy of Near and Far was provided for review purposes and can be purchased via 365 Games or through one of the shops found in this handy Store Locator.