As ridiculous as that sounds, Tooth and Tail gives you anthropomorphic war the likes no one has ever seen. From squirrels with drinking problems to elegant fox snipers; Tooth and Tail nailed it when it came to a very eye catching theme. From the moment I saw the trailer, I knew I had to play this game. Now I will gladly admit that I am not the greatest RTS player. I have played them for quite a while though from Command & Conquer, Warcraft, and older games I forget to mention.

Despite my lack of being ‘Uber’ at strategy games, I still love them and have a great time playing them. Tooth and Tail is no different, this game immediately captured me and drew me in. What separates Tooth and Tail from the rest? Well, there is quite a bit, which I will break down below. Just keep in mind that this is not your traditionally RTS style game. 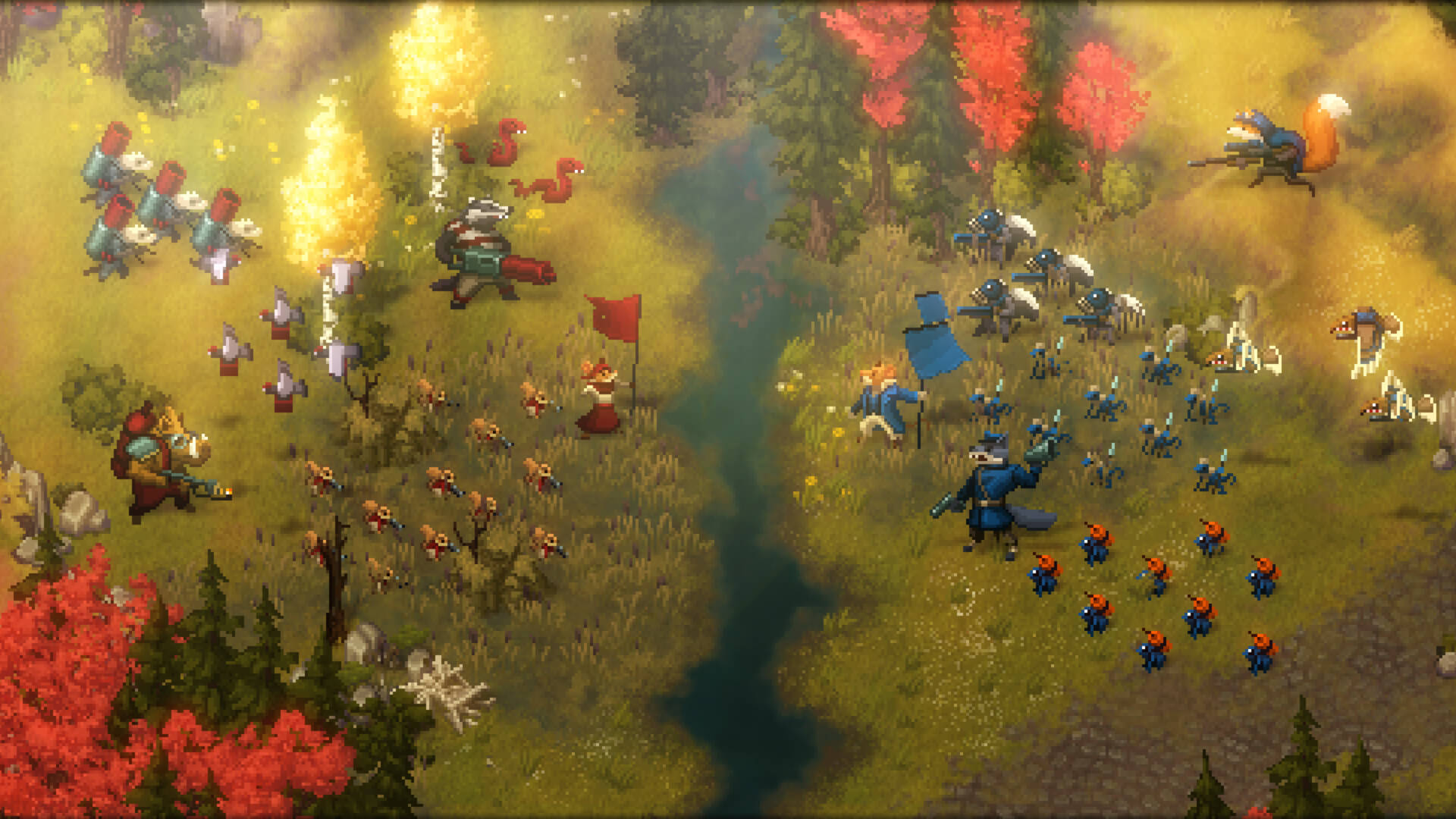 You don’t have to be a hardcore veteran of the genre to play Tooth and Tail.

One thing became very apparent after playing the game a short while. Anyone can pick up this game and play it competently. Tooth and Tail is extremely user friendly because it almost eliminates a staple in strategy games, micro-managing. For better or worse, you will no longer spend time choosing upgrades, making battle groups, selecting individual units. All that is done with the general. 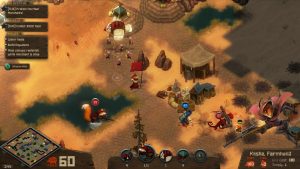 The general is your mousey hero and is also your cursor. Each general carries a flag that when waved tells everybody to get their butts over there and get some action going. There are some finer details to the generals controls, such as the ability to call only one class of troop or have your troops focus fire. However, one thing to keep in mind is that the general, just like everybody else, has hit points. This means that if your general dies, then your troops don’t know what to do other than defend themselves. The general needs to be constantly on the move to effectively scout, coordinate troops, and construct burrows/farms.

At first, this is going to take some getting used to but once you understand the basics it becomes very easy. Even if your general dies there isn’t much of a penalty other than time lost. You can also burrow back to any of your farms from any part on the map. It just becomes weird to think that your general is essentially the cursor. 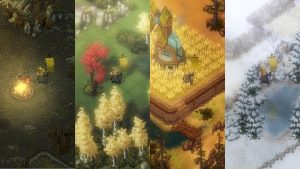 Another factor that makes Tooth and Tail very welcoming is that it doesn’t take long for the action to start. You have three basic building types you can construct with your general. One is farms that generate food/money for you to create burrows/defensive structures. However you must constantly be expanding on your resources, as farms do eventually deplete. This gave me a Starcraft vibe as aggressive expansion is key to winning a match. Constructing burrows automatically starts pumping out troops if you have enough money. Constructing more burrows means more of that troop type. Defensive structures don’t even have to be part of your line up but can be placed down as well depending on cash. Defensive structures come in a variety of flavors, from mines, bullet hives, to costly Drumfire Cannons. In a way, defensive structures are their own kind of units.

Depending on the mode you are playing Tooth and Tail is also modular in the way it lets you pick your troops. Every faction has access to the same kind of troops but can only select six at the beginning of the match. As an example, medic birds, melee lizards, warthogs for heavy, snakes for damage over time, one defensive structure, and fox gun sniper because she is cool. There are a wide variety of troops and with them a thousand different strategies, depending on what accompanying troops you select. This is where as you play more you will gain an advantage over someone who is just starting. Knowing what troops work best in conjunction with your play style is key to winning. In case you’re wondering, troops/defensive structures are tiered in how much they cost vs how effective they are. 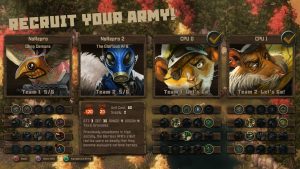 All this combined really makes for a fast, exhilarating and combat packed game. With that in mind though, Tooth and Tail is more about quick fifteen minute matches. While obviously dependent on player skill, long games aren’t likely. This is a different kind of RTS game and that might throw some people off. There isn’t a focus on the long term strategy and troop capabilities are always going to be the same. Nonetheless, I enjoyed myself quite a bit and appreciated the minimalist approach to the genre.

The setting is amazing but feels like it could’ve been so much more.

If you just spend a couple of seconds looking at the art and checking out the unit info section, you are immediately captivated by this furry world and want to know more. Sadly, I didn’t get as much world building as I would’ve liked in Tooth and Tail. The story campaign drops you in the middle of a war based off of who gets to eat who. In between missions, you speak to your troops but it really doesn’t do much other than stylize the game. Haha, the pigs know they are going to be eaten and haha the squirrels are alcoholics. This is all well and good, but doesn’t elevate the story all that much. I did appreciate all the detail but I feel that the story, had it been treated a bit more seriously, could’ve been one to remember.

There are times that Tooth and Tail loses itself in its own theme. A small gripe for a good RTS style game. 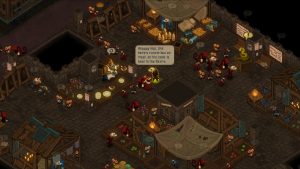 I spoke to a good friend who mentioned the game paralleled many aspects to real world history. I didn’t feel like Tooth and Tail earned that or even attempted a satirical take on events. Despite that, Tooth and Tail is visually quite unique. Each character design is exquisitely detailed. The world felt natural and it never occurred to me once that a skunk with a gas mask was weird. It just flowed smoothly. The graphics inside the game do more than enough and are quite pleasing to the eye. Level design itself is a hit and miss at times depending on which side you are on. I often found myself trying to find my way around cliffs. The cloud of war also disappears in chunks which felt odd.

Not that it really matters all that much as you will be too focused on moving your general constantly to stay ahead of your enemies. There is no time to stop and smell the roses in war.

The campaign is a great way to become familiar with the mechanics of the game. Sometimes it did throw me for a loop on the difficulty curve but nothing I couldn’t bounce back from. Story aside, the campaign missions also feature a side “Heroic” objective which adds a nice replay factor if you’re obsessed with getting a hundred percent.

Then there is everything else. 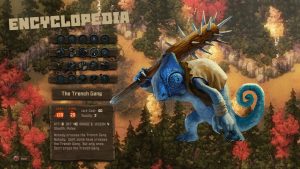 The developer nailed its theme and I can’t say that enough. This is true in the music, sounds, and voice acting. The music has a grizzly(pun intended) western/industrial revolution type of feel to it. It’s wonderful and really elevates the feel of the game quite a bit. I never got tired of listening to the soundtrack or explosions. The voice work while not a huge focus is well done.

When it comes to replay value Tooth and Tail has plenty. There is local/online multiplayer support and maps are randomly generated by seed. Tooth and Tail does feature controller support and it’s one of those games you can really play equally on either keyboard/mouse or gamepad. This is again thanks to the games minimalist design. There are also ranked and un-ranked matches. You are going to get your bang for your buck with this game as there are plenty of different strategies and many ways to play.

Innovating by stripping away.

I really do recommend Tooth and Tail to just about anyone. This is a great introduction into the genre and it gets straight into the action. While it is odd to say, Tooth and Tail manages to be innovative by making things simpler. I don’t see that very often, but the game does pull it off nicely. There is a lot of competition out there in the RTS space but Tooth and Tail certainly stuck its flag in the ground and made itself known. No one can say that Tooth and Tail isn’t unique and I think that clearly shows. It’s fun, fast, and great for a group of friends. It has plenty to offer beginners and veterans alike.

As a side note, I will never look at my pet rat the same way ever again.