Quadropolis is not a brand new board game, having been released in 2016, but it has rapidly become one of the most loved city-building games available. The game has been nominated for numerous awards since launch, and as a result, Days of Wonder has now released the first, official retail expansion in the form of Quadropolis: Public Services. In this review, I’ll be taking readers through an overview of the base game and the new expansion, and if your interest lies in just the latter, you can skip straight to the last section.

In Quadropolis, each player is tasked with building a functional city by drawing tiles from a shared pool using architect tiles that come inclusive with specific rules for use. The game includes two modes known as Classic and Expert, and each of these provides variances to rules, tiles and scoring, and the Expert mode adds an extra round. Quadropolis accommodates two to four players, and is suitable for children and adults aged eight upwards, although the Expert mode is probably more suited to those over around eleven or twelve. 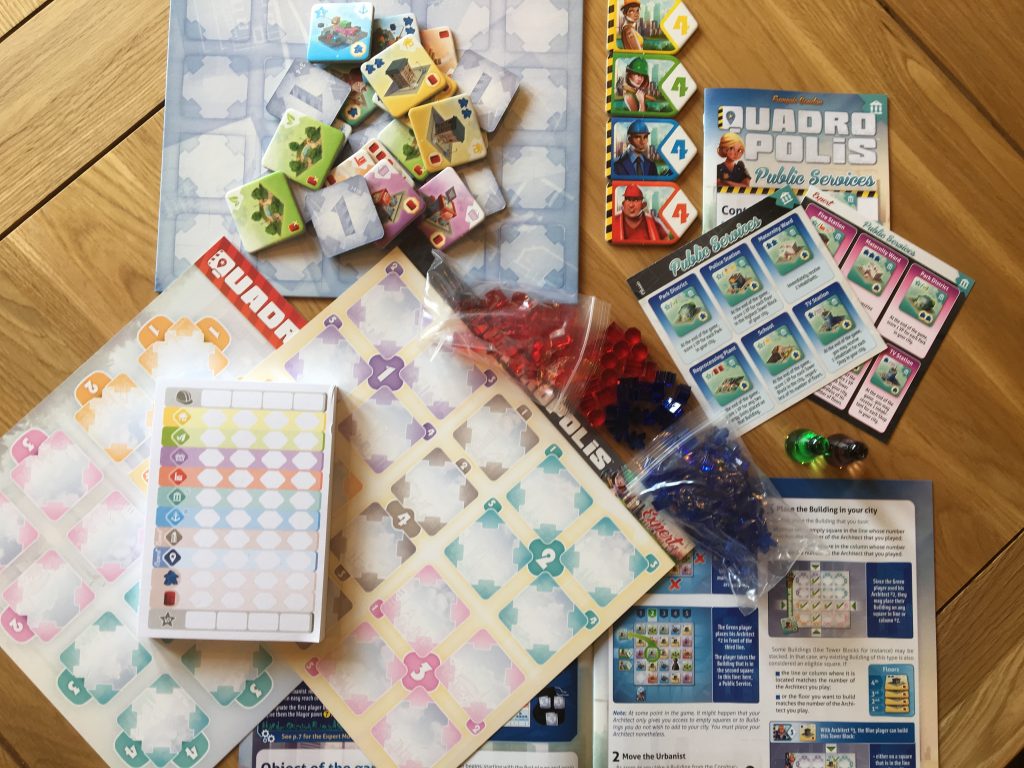 In a thematically appropriate twist of excellent planning, Quadropolis is a marvel of plastic and cardboard, with an exceptionally well designed box insert that holds every piece in perfect order, even when the box is stored upside down or on its side. I suspect this is to aid with the fact that were it any other way, setting up Quadropolis might be a nightmare due to the sheer number of tokens, and the way in which they are used. In any event, no detail is spared, and there is even a leaflet that explains how players should stack the excess punch cards beneath the insert, to ensure it is snug against the lid. Brilliant.

There is, in all fairness, tonnes of stuff in the box as you can see in the picture above. The large, main board acts as a shared construction yard that plays host to the buildings that players vie for using their architect tokens. Each player then has a smaller board that represents his or her city, which is where buildings are placed when drawn from the construction yard. Days of Wonder has also included blue and red plastic pieces to represent meeples and oil barrels respectively, and these translucent pieces are built to a very high standard. A few other bits to include the architect tokens themselves, a pad of score sheets and a couple of oversized pawns that are used to represent The Urbanist and The Mayor, both of which I’ll explain later.

The rulebook is relatively brief for a game that includes two fairly distinct modes of play (Classic and Expert) and everything is explained in a clear, concise way with examples where rules can vary. This is especially true for scoring, because there are numerous ways in which identical buildings can score depending on what they are adjacent to, or how high they are. This is important, because understanding the multitude of ways in which you can score really drives all other behaviour in Quadropolis. 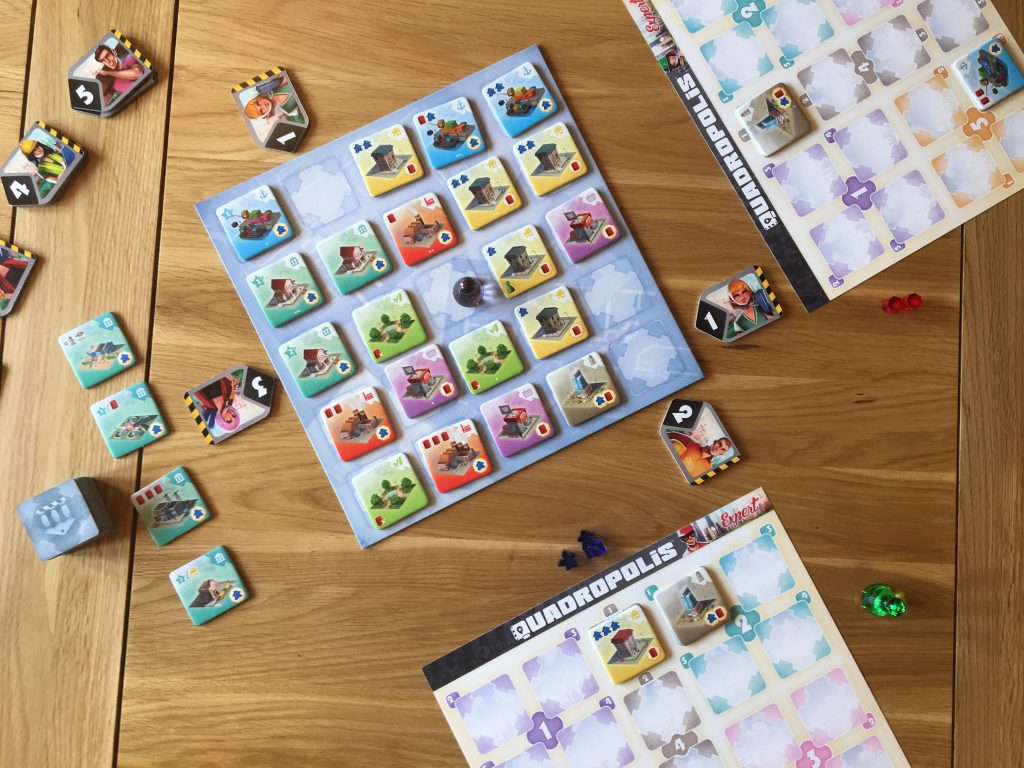 The game structure in Quadropolis is much more straightforward than it might appear, which is a key factor in why it’s so much fun. Setup is quick (thanks to that insert I mentioned earlier) and involves placing all of the tokens labelled with a 1 on the back (including either the Classic or Expert ones as applicable) face down onto the construction site. Depending on the number of players, most or all of these are then turned face up (tokens marked 3-4 or 4 are only turned over if that many players are in the game.)

In the Classic game, players then take four numbered architect cards to match their colour, or in the Expert mode, all architects (including a set that are unused in the Classic mode) into a pile on their grey side, signifying that any player can access any of them. Finally, players determine the starting player randomly, and assign them The Mayor pawn. The first player may then place his or her first architect alongside the construction site, and draw the first building tile, which is replaced with The Urbanist pawn. Play then proceeds in this way from player to player until either all architects are used (in Classic mode) or until each player has drawn five buildings (in Expert mode.) Once this has been achieved, the process of laying out the construction site is repeated three more times in Classic mode, and four more times in Expert mode.

Placing architects is not as simple as it may seem however. Each is numbered, and if you want to take a building in the third slot of the construction site, then you will need to place an architect showing a number three alongside the board. In Classic mode, you’ll have an architect for each of the numbers one to four in each of the four rounds of drawing buildings, so things are pretty even handed. In Expert mode however, players draw from the shared architect pool, and there is no replenishment between rounds, meaning that all the number two architects might be used before the first round of play is completed, making things much harder by the fifth. In any mode, no architect can be placed over another, in line with another, or in line with The Urbanist, meaning that choices become increasingly limited as each round progresses.

Whenever players draw a building, it must also be placed on their own city board in such a way that it matches the number of the architect that drew it. For example, if a number two architect draws a port building, it may be placed in a district or slot marked with a two, or as the second story of a building that can be built vertically, such as tower or office block. It cannot be placed anywhere else, it can’t be substituted and if you cannot place it, then it must be discarded.

At the end of the fourth round of drawing tiles in Classic mode, or the fifth round in Expert mode, players assess their city score by assigning population and power to buildings that need it (these resources are introduced by specific tiles as they are drawn) and then counting up points based on city planning. As an example, parks score well next to residences, but reduce score if placed next to factories. Excess population and power results in negative points, which is yet another strategic consideration. 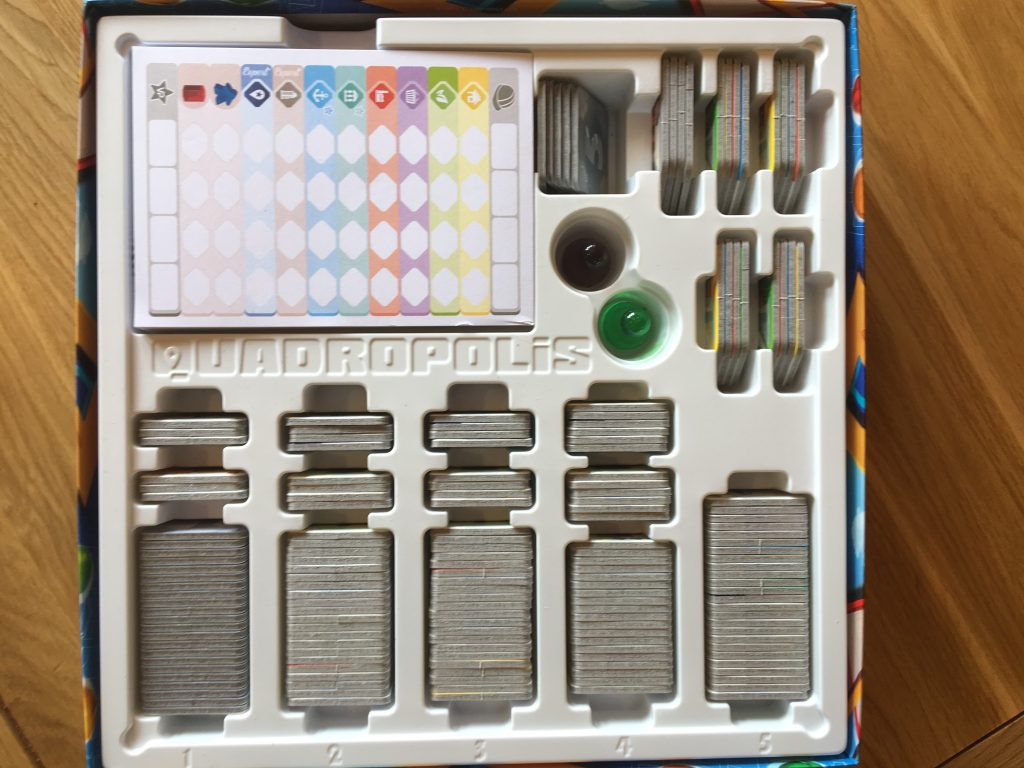 I’ve played numerous games of Quadropolis over the past week in both Classic and Expert modes, and I just love it. The real difference between these two modes relates to the additional complexity involved in Expert scoring, but also because architect selection and deployment becomes a more serious matter. Expert mode requires a lot more complex understanding of how buildings affect one another, and therefore Classic mode does have a role to play for any gamer being introduced to Quadropolis, or for younger gamers in general.

That said, Classic mode is still a lot of fun, and if anything, I felt that it allowed players to be a little more creative with their city planning, without an absolute need for a laser focussed strategy. In Expert mode, you simply cannot do everything, and there is a much higher likelihood that players will specialise in one or two high scoring strategies using the more valuable Expert mode buildings. This, in turn, and in conjunction with the drafting of pooled architects can lead to more “take that” moments, where one player deliberately blocks another one, or takes a piece he or she knows other players want, even if it is no good to them. That kind of play is more or less redundant in Classic mode.

Regardless of which mode we played, I never found Quadropolis to be especially confrontational, and it is rarely wise for any two players to focus on the same strategy, because quite simply, there aren’t enough pieces to go around. A general sense of camaraderie exists among players, and it is really fun to watch the different city interpretations that people come up with take shape, especially when you come to score them and place the little meeple and energy tokens onto buildings and see how well they really did. 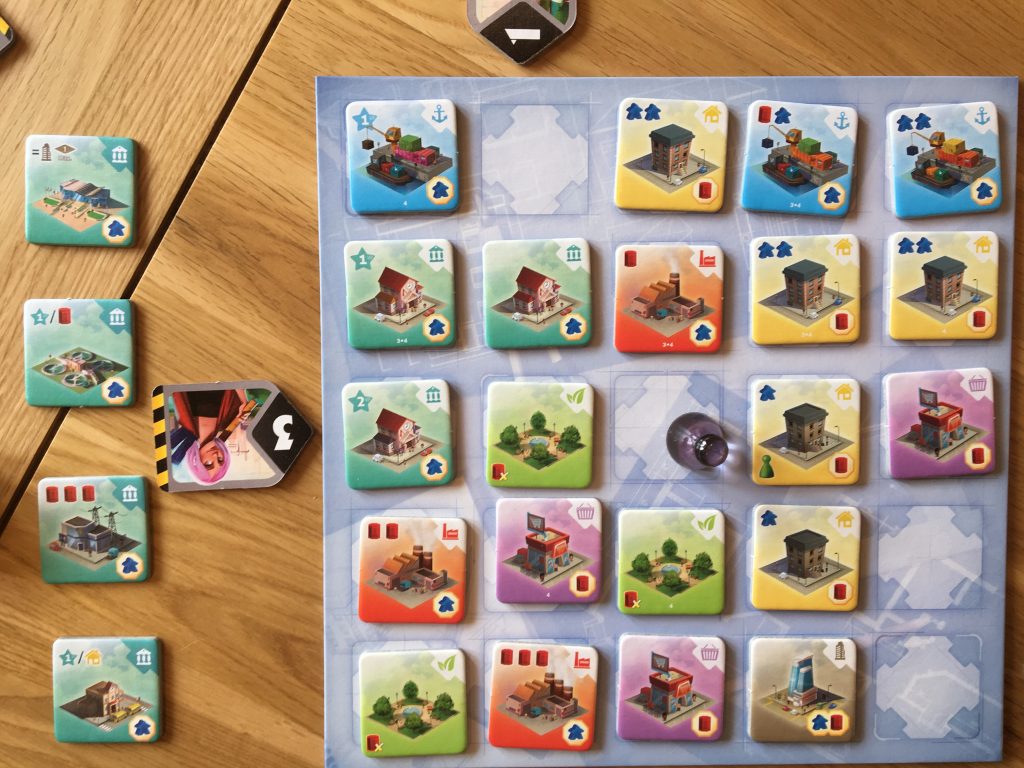 With the Public Services Expansion, players take either the stack of new tokens labelled Classic, or the stack of tokens labelled Expert (as suits the game being played) and draw four per round from a face down pile. These are placed conveniently adjacent to the construction site which is laid out as normal. When a player uses an architect to draw any public service building from the construction site, that player may take that tile, or instead, they may take any one of the additional tiles that are now face up alongside the board.

New buildings are varied and include schools, fire and police stations, civic halls, libraries and more. Each of these adds new and interesting variants to the existing scoring mechanics, but none of them are revolutionary in such a way that the game is broken as a result of their inclusion. Using them felt to me a bit like a sort of Expert-Plus mode, because considering placement became so much more complicated, but then again, in many games I played either I or my opponents ignored public service buildings anyway, and it rarely did them any harm.

The Public Services expansion for Quadropolis is a relatively small addition that simply enhances what is already there, yet for experienced players of the Expert mode, I should think it adds enough interesting variation to be worth considering. I didn’t love the way that the expansion is set up, because it felt to me as if it was a slightly careless and jarring addition to an otherwise extremely well structured game. This may be slightly harsh of me however, because the base game of Quadropolis is so tightly presented that wedging anything new into it was always going to be challenging, and it’s not like laying out four more cards is much of an overhead in either time or complexity really. 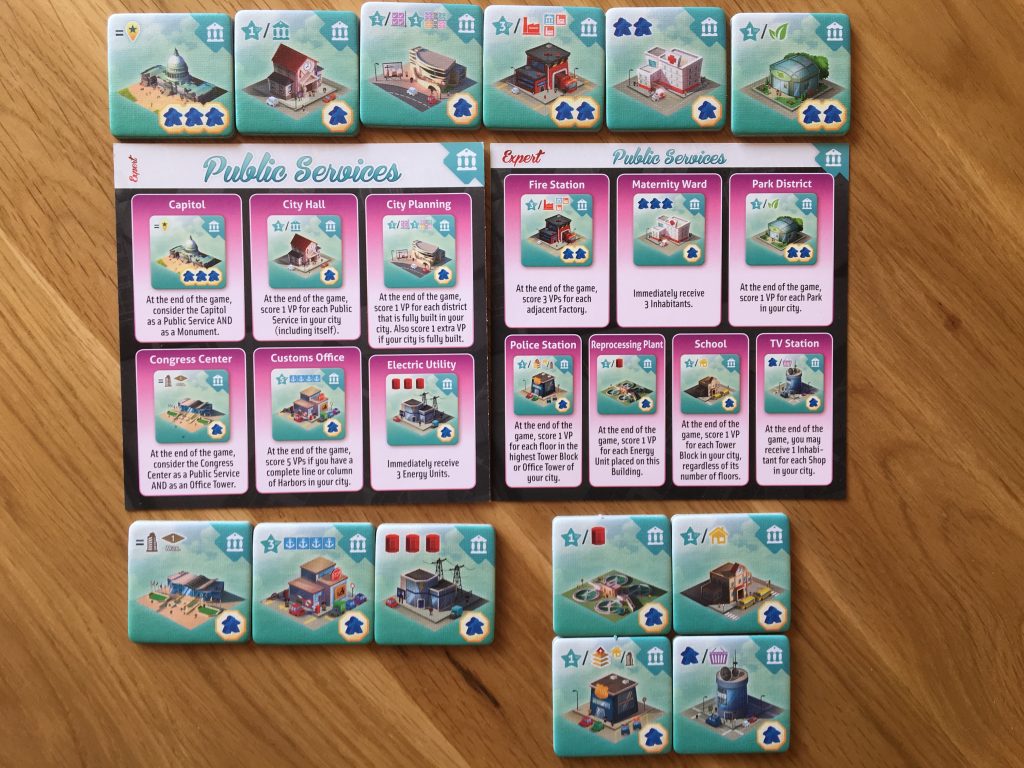 In conclusion, I wholeheartedly recommend Quadropolis is a game for children, teenagers, adults and basically all humans. Even my oldest daughter (who is just under three) likes the pieces, and has so far resisted eating any of them. Of all the games I own, Quadropolis is perhaps the one that I am most excited about teaching her, which I think is quite a ringing endorsement. It is currently my favourite city building game by miles, and it is so quick to set up and easy to learn that it really is suitable for just about anyone. Scoring and advanced strategies are complex, but the inclusion of both a Classic and Expert game is a masterful way of onboading new players without a daunting learning curve. Bravo, as always, Days of Wonder.

Quadropolis has a regular RRP of £34.99, whilst Quadropolis Public Services costs £14.99. Both are available via 365 Games or through this handy Store Locator. A review copy of each game was provided for review purposes.