Yo, Bartender: a Mixology Game with Memorable Physical Controls

I write this short feature with a great sadness in my heart. Yo, Bartender, from Kraken Games, is probably one of the most enjoyable physical games I have played in years, and — being a student project — it is almost certainly going to be reduced to a memory due to the restrictions of technology.

Last month, in Skövde, Sweden, I attended the Sweden Games Conference: a combination of a local showcase for a town fighting back against brain drain, a series of presentations for local students and a convention for the public to see a celebration of the rapidly growing Swedish games scene.

Amid the games on show was Yo, Bartender, a student project which utilised the gyros from Wiimotes, and other practical elements, to replicate the tipping and pouring of drink mixing. 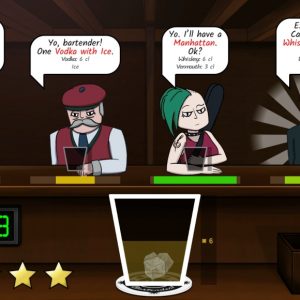 Six controllers, each mounted inside a variety of bottle shapes, served as your spirits and juice, while arcade cabinet buttons were registered for ice, olives and more. To top it all off was a ‘glass’ a container central to the set-up, which contained a receiving sensor and was mounted on a joystick’s four-way-axis. In knocking this joystick left and right, you moved between waiting customers, in pulling towards you the drink would be thrown away, resetting your progress, and in pushing it towards the customer you would slide it to them with a wink and a smile.

The glass has a maximum capacity, and the recipes require minimums of each mixer in order to count as a success — this gives you a little bit of room to play when it comes to more simple cocktails — after all, who is going to complain when a simple whiskey comes in at the same price with triple the alcohol in it? — however, drinks like Long Island Iced Tea require so many ingredients that you can’t afford to over-pour. This is where the delicacy of it comes in. That and the fact that the tavern very quickly fills up and not all customers are patient.

Each of the bottles, thanks to the gyros, fed back to the game exactly which angle they were being tilted at. It was almost as much fun watching players become more competent at the game, from tilting a single bottle slowly, to using both hands and tilting at various angles to pour faster, as it was playing the game, and I gladly took others I had met at the event over to the game to watch them play it.

What with the recipe cards, ingredient based puzzle solving, and first person view, it was nearly impossible for me not to think of Cook Serve Delicious, a series I am massively endeared to. However, with the physical element of the game, and room for the chattiness which comes of working at a bar, Yo, Bartender, I feel, has a lot of potential at events, and also a lot of potential for a story mode. The latter is definitely not intended at the moment. As a matter of fact the game is set to be forever shelved due to reliance on Nintendo’s controllers for the functioning demo version, which is a shame because I can imagine happily upgrading my bar and drinks selection, all whilst IDing kids and juggling the restocking of snack food.

While Kraken Games’ student project may currently be set to be stuck in development limbo, I hope it is something they return to at a later point in time, even if the interactive controls are to simply be replaced with keyboard inputs for the time being, or even if —as I discussed with the team at the time— they opt out of the current, visceral feel, for a virtual one using VR.