Balance training and spinning to bring glory to Flaustria in surreal strategy title Astronaut: The Best

Lead the Flaustrian Space Race, carefully monitoring and managing your astronaut’s stats, appeasing the five high priests, spinning the wheels of propaganda in your favour and all while trying to meet deadlines. Astronaut: The Best is a chaotic, entertaining, choice-driven management game almost overstuffed with enough options and events to keep things varied and fresh.

In Universal Happymaker’s Astronaut: The Best you take on the role of the freshly recruited Director of the Flaustrian Royal Space Agency. You’re quickly tasked with making sure that the astronauts you’ll be sending hurtling into space have the skills to not only make it there and back but also to impress the press and defeat the opposition along the way. It plays out as an innocent-seeming management game with you trading spells, dealing with political leaders and picking out training regimes for your team, but there’s a lot of systems at work; More than enough to keep the chaos level high.

There are more than a few things that will stick out on your first playthrough, including its trait system, but perhaps its art and setting stand out the most: A wacky 2D-meets-3D world of absurd characters and bright colours that fuses incredibly well with the deep, bizarre setting that is relatable to this world through only tiny threads. Spirits, Magic, and snake people are here, but so are TV, boxing and telephones. 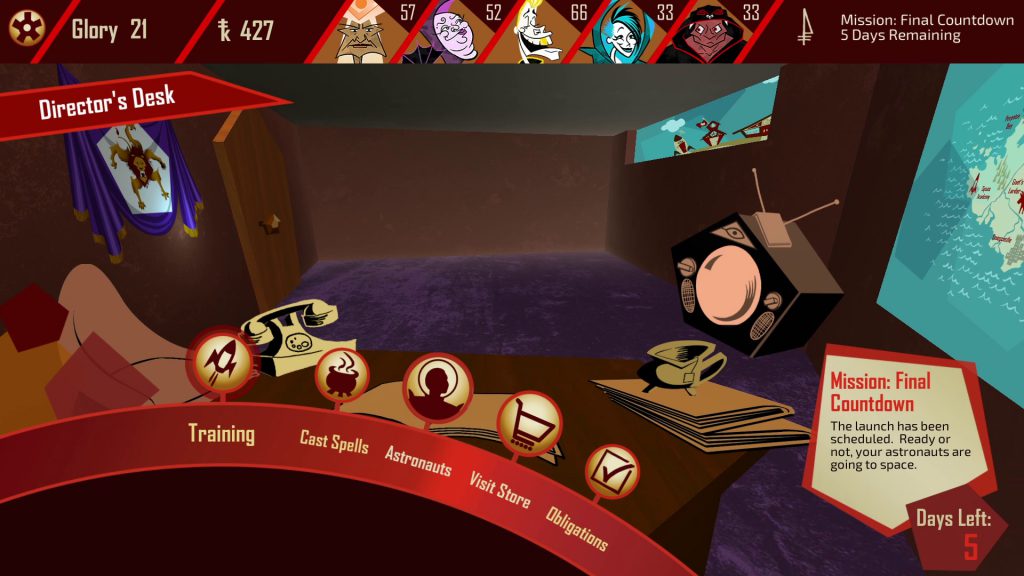 We first wrote about Astronaut: The Best back when it was going through Steam Greenlight, almost five years ago, it’s quite a different game now, although the core is still the same. Back then we were really impressed, not only with the effort that had gone into the creation of the setting, but also the character traits system at work. Notably, at the time, we were also under the impression that Astronaut: The Best would be one long story, pockmarked with the events which truly underline those traits. We wrote:

“Each event in the game tests against a certain statistic, with a chance probability and a reward probability. For example, on Tuesday you send two astronauts to the fairground, three tests are then rolled which will run a probability against their stats and traits,” adding “It’s the textual flair and the lack of repetition that really bring the game together. On my first playthrough -at said fairground- one of my astronauts got a boost to success because of the disgusting appearance of my other astronaut, meanwhile, the ugly one developed a trait that made them think they were a werewolf, and so got a massive boost themselves. The latter still failed a test [though], as another trait of his was tied to him being exceptionally short – and the sight of the rollercoaster filled him with remorse and resentment at never being able to ride it.” 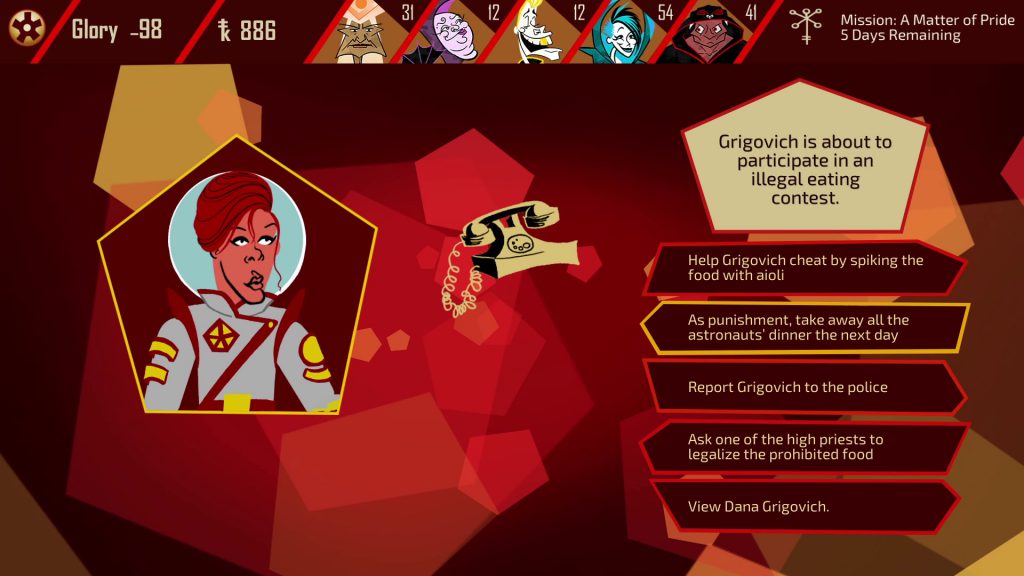 As you can tell, it gets quite chaotic, especially if you start forgetting some of the traits that your astronauts have.

The example above still holds up quite well as a representative of the experience, however, the most critical difference is that the game is now split up into chapters. These chapters are listed as missions, and each increase in difficulty and length exponentially, introducing new things to worry about with each shift.

This does mean that every chapter triggers a new set of astronauts, restarting your relationships with the high priests, and scrapping any magical spells or incantations that you’ve picked up along the way. In fact, the only thing that persists is your total earned (not scored) Glory — a reward for doing cool stuff — which is converted into a currency that can be used to buy permanent, multi-dimensional upgrades in a fashion similar to a roguelite. 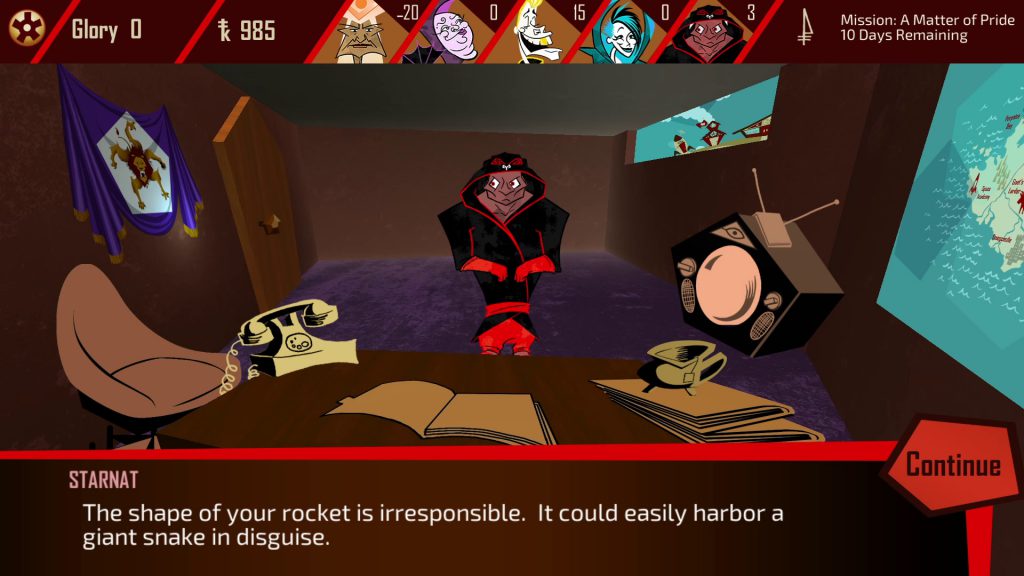 This is where the major issue for Astronaut: The Best will spring up, I believe. The nearest, commonplace genre to it is visual novels, which tend to be titles that you can get a good 2-3 varied runs out of and that many people will only play through once. When you bolt the roguelite persistence element and chapter structure onto it there is a chance that people will try and race through the chapters to unlock as much as they can, seeing the game mainly as a strung-together narrative rather than a selection of replayable start points. It’s something that can also be seen in fantastic games like Pathway and Crying Suns, where the chapter structure infers both a finite end and a preferred path even though they’ve got a massive amount of content.

But, Astronaut; The Best, much like those other two games, is almost specifically built to be started over and over, at — once unlocked — whichever narrative you are in the mood for. And you really should do just that, because the astronauts in each campaign, like the events, are pulled from a mass of options. 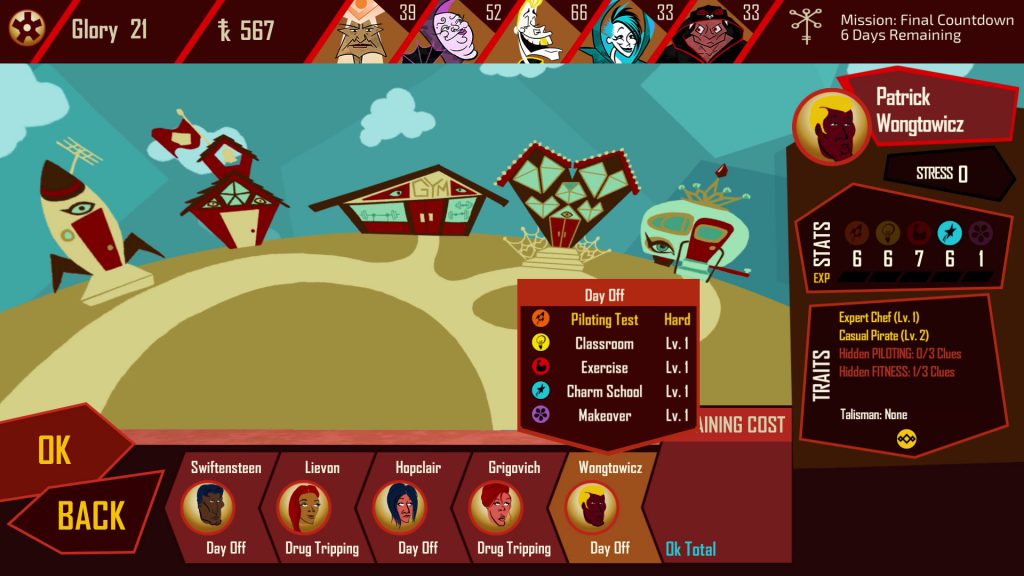 I started one chapter and had three pan-handling astronauts on my crew, two of who were hewn from Clay. Their panhandling immediately gave me a massive boon to my weekly earnings – so much so that I thought it was deliberate. But, nope, on restart they were different, they had different stats, and the events that took place before the launch played out largely different. While a lot of time is spent talking to the high priests, who each have their own interests and are invested in the space race for various reasons, the rest of the game is shaken up pretty hard, and definitely warrants diving back in multiple times.

I’ve played far more Astronaut: The Best than I needed to in order to pull this piece together, and I think I’ll keep playing it. There’s joy in the chaos. During my hours with it I’ve been drunk under the table while trying to stop an astronaut from giving away our secrets to spies, I’ve set a group of drug ragers into space and had them babble ridiculously to the world’s people, I’ve swapped out my entire astronaut crew for supermodels, and I’ve had spaceships do cool flips in space to impress a high priest. I’m sure there’s a lot more cool stuff that I’ll see over my next few hours.

Astronaut: The Best will be available on PC via Steam.