High Hell sees you taking down the criminal overworld from the top of the world, as you shoot your way across rooftops in all of its screaming, laser-firing, twitch-shooting havoc.

Before I started writing this review, I loaded up the screen-captured footage which I had recorded while playing High Hell. Five minutes in, something happened which I had completely forgotten about. I watched as I quit to title, loaded up an early mission, then proceeded to spend far too long simply taking a step backwards, jumping and trying to shoot through a gap in a railing before throwing myself off the roof of a building. Murder and extraction at breakneck speeds.

That speed-running attempt is the epitome of High Hell, a game about killing everything as quickly and efficiently as you can, before propelling yourself off of the trashed, blood-stained rooftops to parachute away like you’re in a hyperactive, drug-fuelled James Bond intro.

It’s not simply a game of doing everything quickly and destructively, however. Accuracy is key, much like in the last game from developer Terri Vellmann, Heavy Bullets. Enemies are quick to react, and it normally only takes two or three clean hits to send you to your grave. They’ll also actively seek you out once they’ve spotted you, which is awkward when fighting from rooftop to rooftop, and not ideal when a dog spots you through corridors and chambers, deciding to give chase to claim a chunk of your leg.

Death is, like the levels, quick, and the compulsion to return is similar to in Hotline Miami — the fast combat, directed maps, and brightly coloured world all scratching at you, assuring you that you can do it a bit faster, or you can shoot first, if you just angle a little better when you hit that corner.

Despite death being quick, and your one weapon, a laser rifle, being equally quick, movement isn’t. While strafing and bunny-hopping (staples of the early shooters it attempts to channel) are in and welcome, the overall speed of the character feels slow. Also, some areas are simply overcrowded; the purity of Doom, Quake, Hexen, Unreal, et al. was in the only obstructions in the levels being platforms, columns or containers. Room to strafe, or pace, or circle, was liberal in the titles  High Hell feels most influenced by, yet its rooms are crammed with awkward boxes, desks and other furniture.

Yes, yes, kicking in a door to a lab, shooting three people dead and leaping onto a desk to close the gap between the person dodging away from you in the corner feels brilliant, but kicking in a door, strafing into a box, getting shot and jumping over a desk to get caught on another desk while getting shot does pretty rapidly make you forget the screaming, awesome moments of laser-precise blasts you pulled off two rooms back, especially when you’ll now have to retread the lot.

That said, the sixteen levels (there are twenty in total, but four are strictly boss fights) are all short, and so learning the layout is easy enough, it’s just that sometimes clutter becomes cover, which doesn’t feel quite right in a twitch-shooter. More levels, or even a level editor, would have been vastly preferential to some of the filler, especially since the core gameplay loop of ‘run, shoot/destroy/interact, escape’ is so pure. 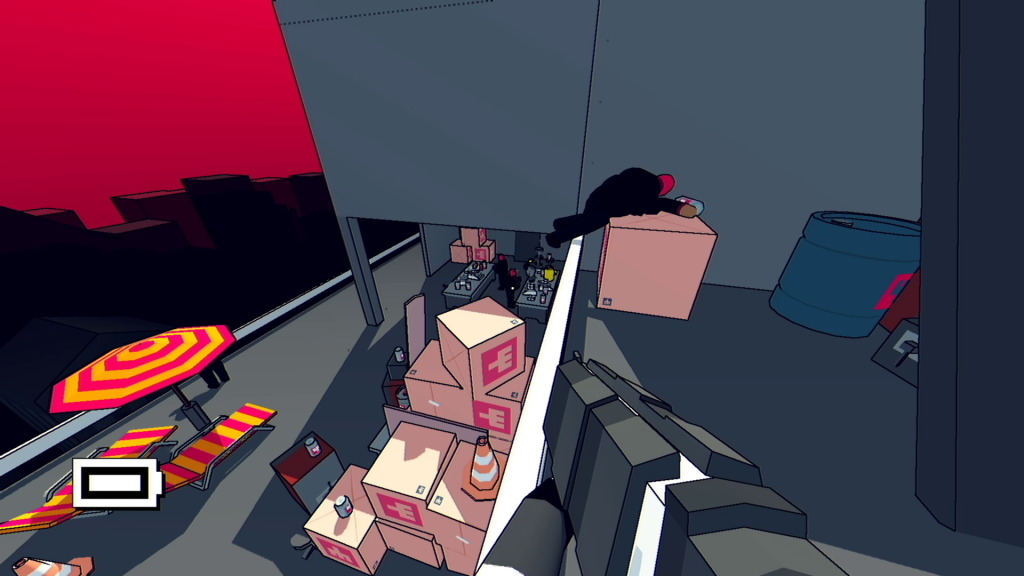 Optional objectives, like burning stacks of money and finding hidden collectables, do add some replayability to the game, however most of the compulsion to return is tied to the High Hell’s fast nature and extremely competitive leaderboards.

If you’re not a fan of either, then you’ll likely find the resting price a little high for a game which may only give you a couple of hours playtime and a sore wrist, but if you’re a fan of shooters, or speedrunning, then High Hell is highly recommended: You’ll find joy in the soundtrack by Doseone, (0RBITALIS, Enter the Gungeon, Samurai Gunn and more), the humourous objectives and strange enemies.

A key for this game was provided by a third party for the sake of review. Very nice of them, if you ask me.