Occupying an incredibly popular section of the Yorkshire Games Festival this year was Smash Tanks, an artificial reality game coming to the Apple App Store this December, with Android devices lurking hopefully on the horizon. While public interest in AR has been somewhat muted since the media starburst which was Pokémon Go, Dumpling Design could be onto a casual winner with Smash Tanks. 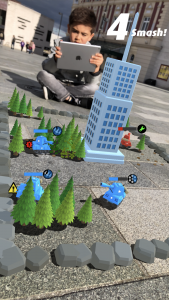 First things first, Smash Tanks needs a flat surface to act as its area-of-play, so pick your favourite table and ditch the psychedelic tablecloths (disclaimer: psychedelic tablecloths may work fine as far as we know and it does appear to work on grass). It didn’t take long to set up at all and didn’t require any special markers, which is an improvement on some AR games we’ve previously encountered. Walking around the table, everything stayed in place, putting us in the perfect, commanding position to preside over the smash.

Of course, it would help to take some tanks along with you before you go waltzing into combat, so the next thing you need to do is choose your three tanks. There are several types to choose from; not knowing what any did, we opted for rocket, laser and repair tanks. These appeared on the table before us, an opposing force of equal strength hidden from view by some apartment blocks in the centre of the table.

When combat began, we half-expected gameplay to be the AR equivalent of Time Commanders’ strategy table, manoeuvring tanks around a map with tactical aplomb (or total lack of it). Smash Tanks is actually far more physical, more like billiards than anything else, and far more suited to its version of reality as a result.

To knock an enemy tank out, select one of your own on the screen, pull back as far as needed and let go. If you hit, it smashes into it (hence the title), dealing damage. A particularly good hit will deal critical damage, while a miss will see you ricochet off the table boundaries. You can even cause damage to buildings, as we found out when a tower block tilted sideways in a grand collapse which resulted in one of our tanks exploding. You take turns smashing tanks with the enemy, which means you may sometimes be better positioning defensively than attacking every turn (although we never tried to former intentionally, and when we did it by accident, a building fell on us).

Tank types come into play when they’ve dealt enough damage, after which a symbol appears above their model. Tap it, and the tank uses its special ability. By the time we got to test this, the battle was almost over and our repair tank was ready to do its job, so we tapped it to see what would happen even though we were almost at full health. Unfortunately we made it crash when we did this, but we got the gist of it and it would be interesting to see what types like rocket and laser would do. In fact, we enjoyed playing Smash Tanks so much that we almost forgot it crashed.

When Smash Tanks releases this December, the team aim to have three multiplayer modes available: ‘Pass-Play’, where players pass one device between them; ‘WiFi Match’, where each player battles using their own device; and online matches, where players compete against fellow ‘Smash Tanksters’ over the internet. This is exciting in itself, as not many AR games have taken full advantage of such methods of co-operative play, or at least not to our knowledge, and the social aspect of the game could see it become popular among friends.

Smash Tanks, as a concept, works so well on AR that we have difficulty remembering the device we played it on, with only the table itself coming immediately to mind. But it does obviously need a device, and we can heartily recommend it to anyone with a device supporting iOS 11 ARKit this December, and anyone with a similarly capable Android device later down the line.