At the moment humanity is at an industrial peak; for better or worse, technology is racing forward faster than it can be regulated, and humanity is still, in many ways, dealing with issues from generations ago. In Song of Farca you take on the role of a hacker private eye, toeing the moral line between legality and crime in a future not wholly unimaginable.

The year isn’t specified, but it can’t be too far in the future, familiar vans and cars fill the streets that weave between the European-style residential blocks of Song of Farca‘s fictitious, titular city. The crimes are familiar, the difference is that the Mancunian on the phone is calling about an eTerrier, Sir Derpalot, who has been dog-napped.  That’s the subject of the sample case, which can currently be played in the Song of Farca Prologue.

There are more than a few reasons why an expensive piece of tech could have been stolen away, and — light spoilers — it takes you down a path that has you scratching away at a local crime network and the disgruntled individuals that it comprises of.

With the increasing amount of cyberpunk- or hacking-themed titles out there, Song of Farca feels incredibly familiar, but it also feels more characterful than some of its peers. The protagonist is humanised by their continued presence on the top of the screen, how we can see them sitting with their legs tucked up as they make phone calls. Occasionally their dog, which has wheels for rear legs, moves around the room, passing their twitching feet and yapping at the door. 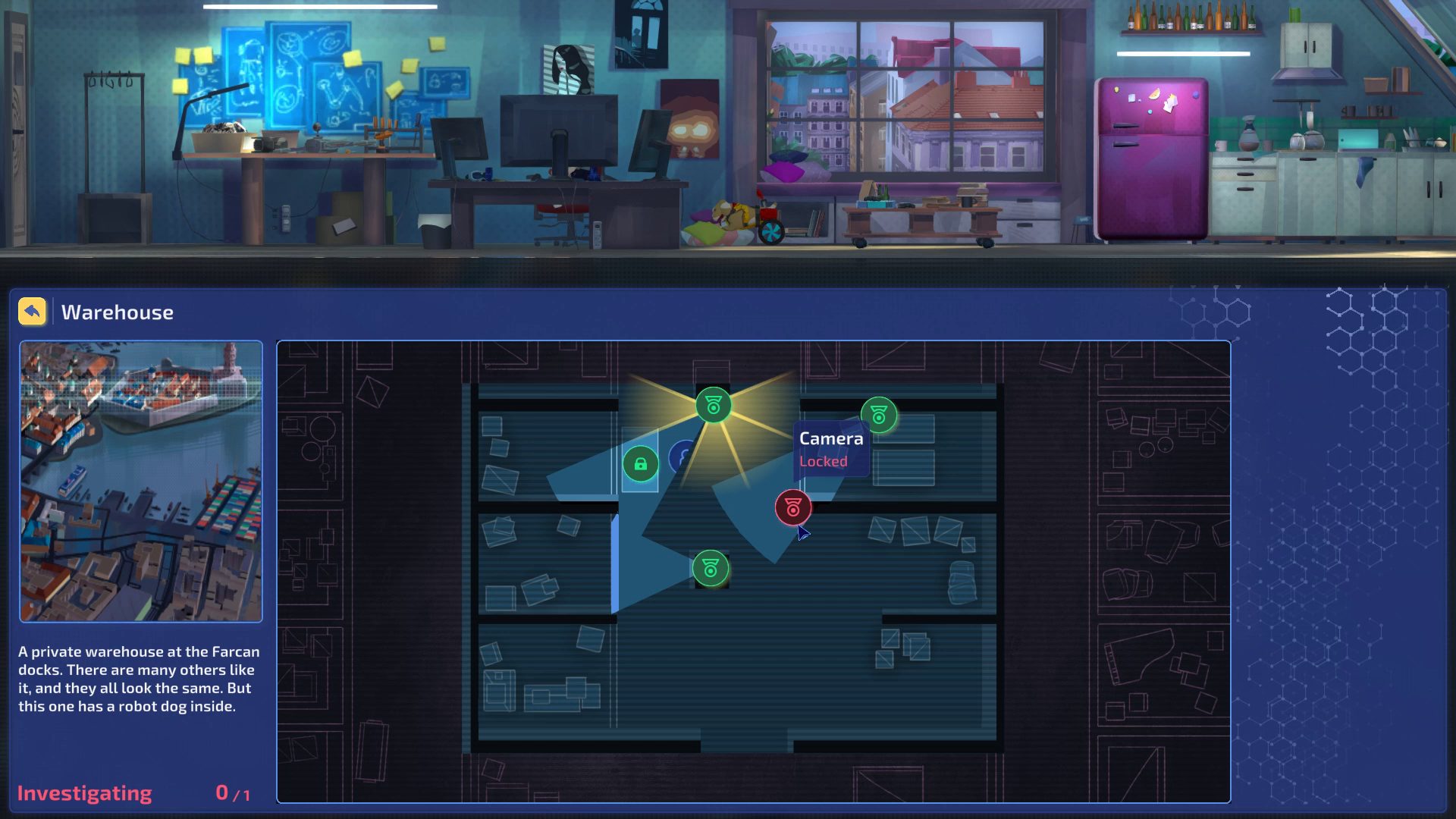 Many of Song of Farca‘s characters are better written than their standard archetypes too. While many of them do get close to breaking the fourth wall, each of them is written in a way that you can almost certainly muck through a lot of the multiple-choice conversations based on their attitude alone. You see, many of the puzzles are conversational, with you showing evidence (photos, files, videos) to the other person in order to keep the conversation moving — but, you can also jump to conclusions, where you tie up conversational snippets to wrap things up.

The rest of the puzzles are more like small micro-puzzles, with you clicking on objects around a room to move bots, droids and cameras so that you can unlock more points around the map. The goal of this is to find documents, which can also be found through your information web, to complete profiles and collect evidence. It’s all handled quite well, and feels a little bit more natural and accessible than other hacking games, although we’ll have to wait to see the final game before we know quite how far this logic is stretched for the greater story. 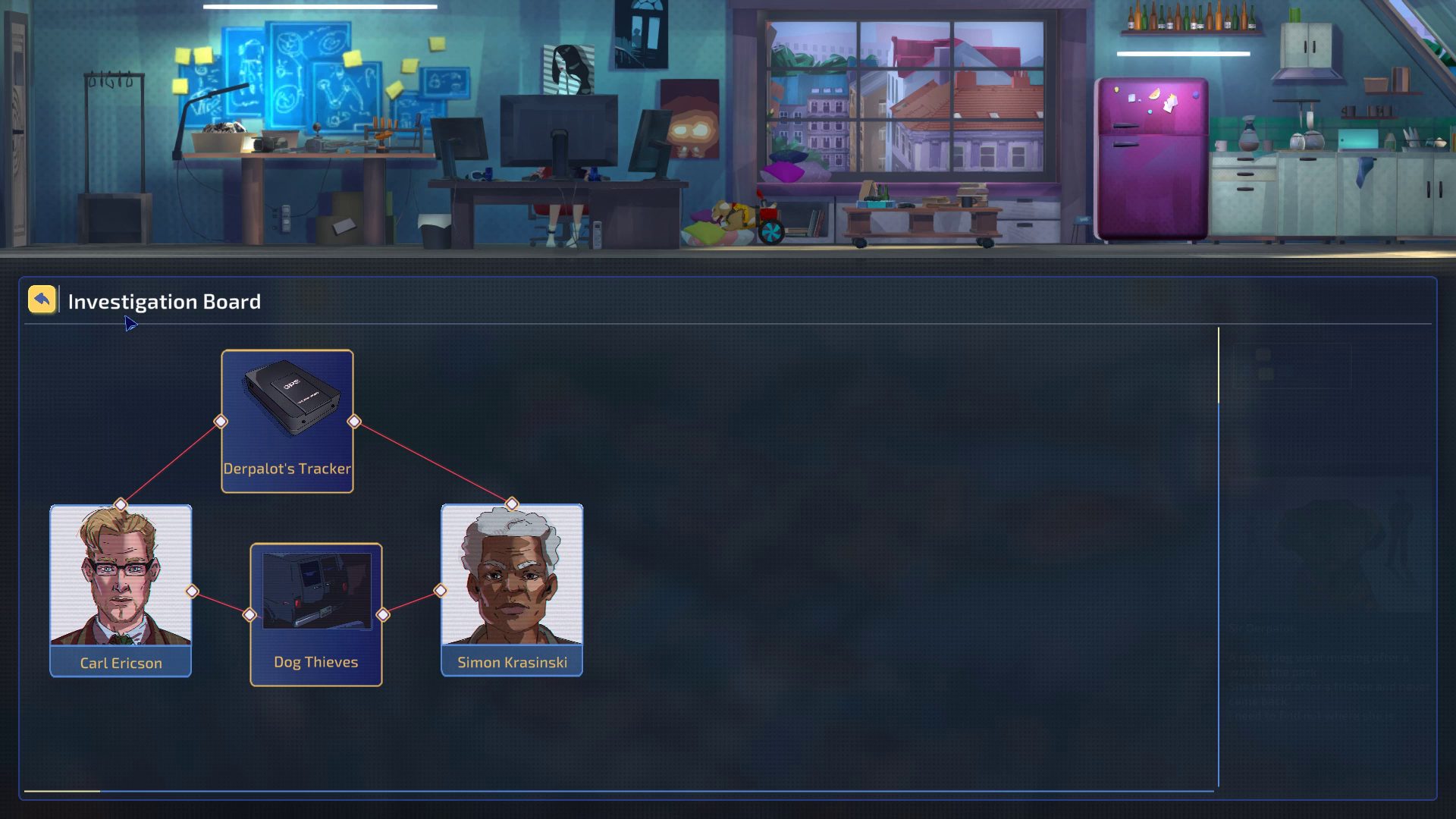 I enjoyed my time with Song of Farca‘s Prologue, and really appreciated the general vibe of tension that it managed to maintain throughout. I’m incredibly thankful that the developer’s built it in a way where you can retread steps in a conversation rather than ‘failing’ and I’m glad there are no killscreens — those kind of things can be incredibly jarring in narrative games, especially ones where the player doesn’t define the exact meaning behind options.

Song of Farca Prologue can currently be played on PC, through PC. The full version is expected to launch in June 2021, when it will release for Mac and Linux also.