Mechajammer‘s The Refracted Update has landed, and it’s not a minor update at all. In fact, it’s a signal that the developers have tied up performing life-changing surgery on their game. Surgery that has taken a game that launched a little bit sickly and tweaked almost every organ, vein and system that runs through it.

Here’s a big point before we start talking about Mechajammer‘s The Refracted, 1.1 update. I really enjoyed my time with Mechajammer before it went live, I dabbled around in 1.0 for a long time and intended to return to it at a later point to explore it a bit more. I was willing to knuckle down, push past bugs (and some brutal, early-game design choices) in order to feast on the gooey insides. But, I know that a lot of other people really struggled with it, and that’s fair… cRPGs are a dusty old genre that’s continued existence is heavily fueled by nostalgia rather than user experience. But, here’s the thing — that old version of Mechajammer is dead and gone now, and it’s not just down to The Refracted Update, no, there have been substantial packs in the time since it launched, but now is a great time to return and reflect, so that’s what I’ve done.

The Refracted Update adds new character portraits, vehicles, armour items, gang side quests, companion quests, and an event log, but it mainly serves as a major sign-off on the game from the developers. The heavier development and fixing stages are now over. Most, if not all, of the launch bugs and issues, are squashed and the patches leading up to this point have almost completely transformed the core game, easing up the start of the game campaign and making it a whole lot easier to get to the freeform part of the game world.

The changes since launch are immediately noticeable. I started up a new game and it filed me into the tutorial where I found that my character actually landed melee hits almost every time. In addition to that, you no longer need to collect items from the floor, with nearby collectable items simply appearing on the bottom of the screen ready for you to click to collect. This removes the need to root out glimmering items on the screen (which, to be fair I didn’t mind) and means that there are no more issues resulting from stacks of items, corpses, or rubbish. On the subject of collecting items from the ground, I didn’t experience any ‘ghost’ items in the inventory anymore, although the top two rows of slots were open but unusable in the tutorial. Also of note though, I didn’t immediately injure myself by trying to use a weapon while having no skill in it. It’s, simply much more approachable and forgiving.

The tutorial ends earlier than before. It used to be that after the squad-command part of the tutorial, it challenged you to navigate through a large, open-world compound filled with enemies and containing a fair few interactive points, crates, doors and vehicles. That’s out now, and, to be honest, it was maybe more fitting of a Metal Gear Solid game than the murky corridors and facilities that you’ll be spending most of your time mucking through in Mechajammer; That said, you can still play the later bit of the tutorial, but have to trigger it by talking to Medic at base camp. 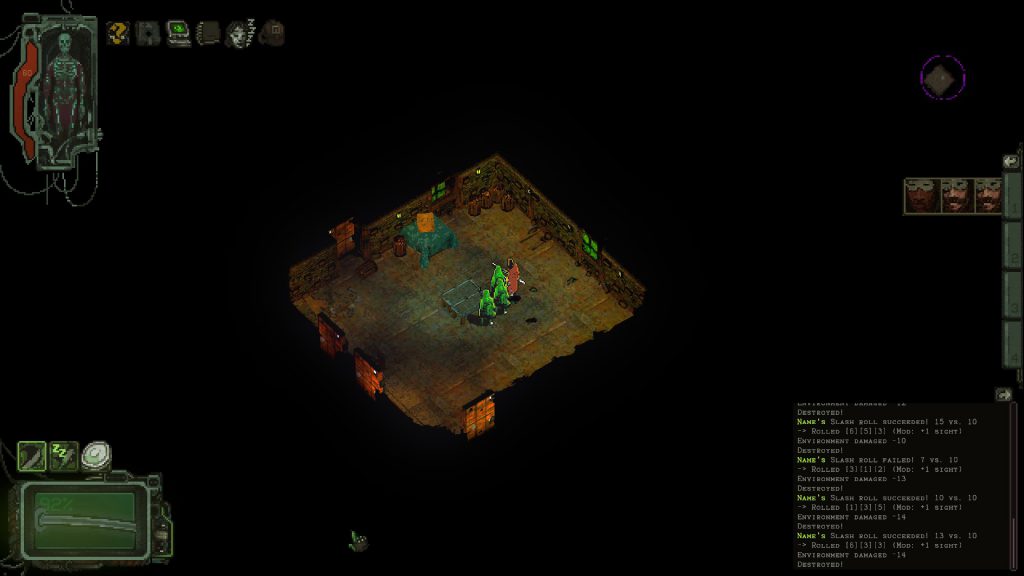 Character Creation is tweaked too, there’s now an option to skirt around the negatives attached to the jobs involved in character creation, however, this does forfeit the perks that would normally be gained. For instance, the Trooper Job gives 2 points in Organics, as well as Plasma, Laser and Slug weapons; but, you don’t get that if you go through the experience ‘flawlessly’. This adds more of a risk-reward system to the character creation, a fix that came within the launch month, following complaints that the original format was heavily loaded up against you. You can also, on this screen, set a colour for your character to wear, and there are a few more character portraits available from launch.

Now, the main thing I was interested in when it came to how Mechajammer had developed was how all of the changes shook up the early game, and inventory. My inventory qualms had already been resolved, so I was already quite impressed, but what I wasn’t expecting was for the screen after creating a character to ask me which form of levelling up I wanted as I played.

In the original version, you didn’t accrue XP. Instead, you travelled around and found Chips that improved skills and categories when you used them up. A shift to XP was fascinating, and so I took that to have a look at the new systems. XP progression was, as it turns out, actually added into Mechajammer with the 1.5 update in late December, and has already been tried and tested by the community. It feels quite well-balanced and is a really good fit for the genre, however, I did miss the novelty behind having an alternative levelling system, and so think that I’ll go back to using that for future runs. 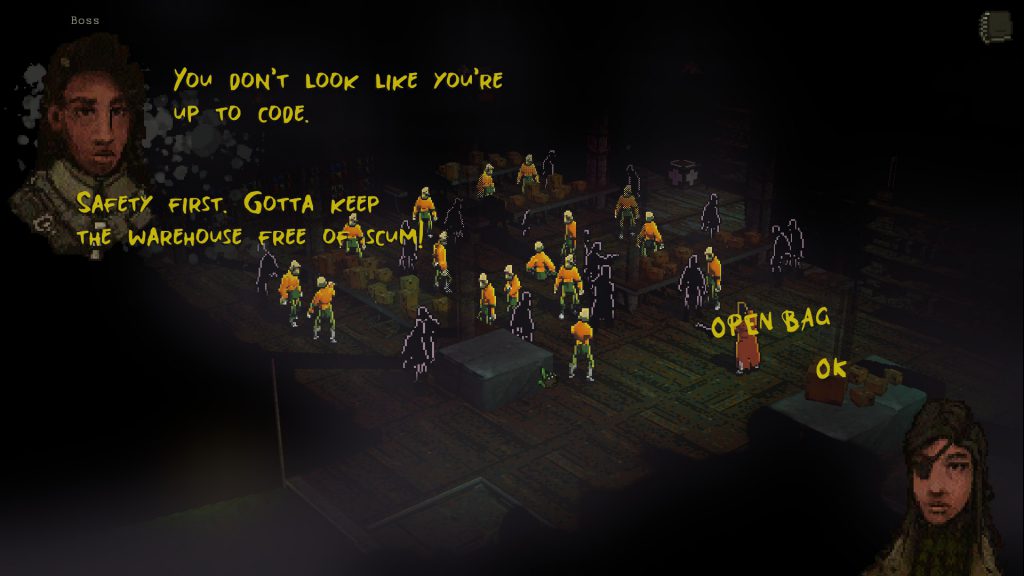 Other things of note include that there’s now a really great tips system included for those who skip the tutorial. It’s also great that the map pins for files found throughout the game are actually relevant to their location on the map. Oh — and, at the bottom of the inventory pane, there’s now a space that shows your AC level, which is incredibly useful (although I confess, I thought it was buttons for sorting the inventory at first and was confused that they weren’t interactive). There are a lot of tweaks throughout.

All of this said, there are some issues still, mainly with pathfinding and object levels. In order to accommodate the stairs at the start of the game — in the island compound — the developers had to do some false wall jiggery-pokery. It’s possible to click on an area just beyond a wall, near the stairs (and also in the room with a locker near Pelican), and end up outside of the level, and in the case of the former you’re fully trapped and unable to get out. All of this said, I am notorious for breaking games, and perhaps better suited as a QA than a reviewer, but we’ll save that for my next life.

I found my way outside of the map like this quite a few times, with the worst cases being when it was tied to elevation. There were a few points where I needed to spam the jumping in order to get up slides or stairs, but a couple of points simply left me totally trapped and having to load older saves. Luckily I’d been saving very often, although restoring does cycle drops, which has its own positives and negatives. 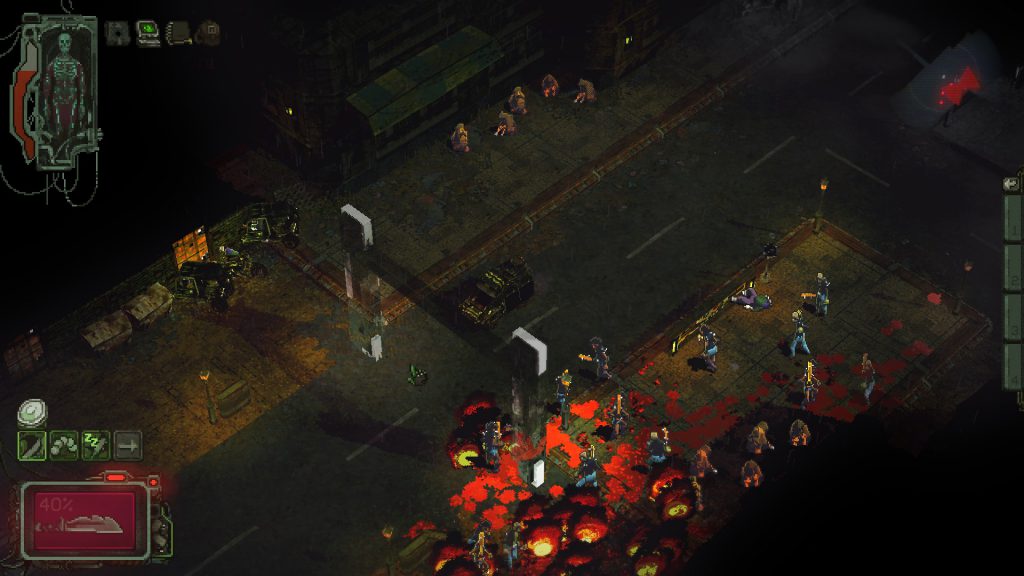 Now, back to the game. When you first leave the smaller, starting island you used to be approached by a chap called Gunter who told you that you were in trouble. Despite loads of pre-launch rebuilds, I could never recruit him, or many strangers, to my side. I managed to charm both him and a vagrant almost immediately in my first run of The Refracted Update, and did so with just two dice in Charm. This is a great start, and almost immediately gave me hope for a danger-free route through the first boss fight.

While that didn’t quite come to pass, my original gang of three managed to smash their way through Harry’s workforce and the second batch of three vagrants — each tooled up with a weapon I found on the way — made light work of him. This trimmed a really long slog through the onboarding area down into a short 5-10min affair. My first run at Mechajammer had me spending an embarrassing amount of time exploring to try and avoid that fight, before spending just as long dying repeatedly to the boss because I wasn’t specced for combat. This time I breezed through, it felt great.

Part of the reason it felt great is that there’s vastly more variety when it comes to loot in the game. My launch runs left me with an inventory stacked with guns, knives, med kits, trash can lids and ammo, with next to no armour and only a handful of grenades in there to break the monotony. By the time I crawled off that island in my latest run I had my three followers — who were equipped with things like swords, throwing knives and whips — and I had an inventory stuffed with varied armour, pre-upgraded weapons and loads of other cool stuff, with no real repetition. The new, varied loot was incredibly welcome.

Mechajammer, following The Refracted Update, is now at the place where it should have been at launch. It’s a phenomenal game in a moody, grungy world; combining deep world-building with a dystopian future in a way that’s not been done before. I highly recommend it, but especially recommend starting it up again if you gave up on it around launch time.

Mechajammer is available now on PC, Linux and Mac.

The Indie RPG genre is booming. More and more developers are seeking to rekindle the games of their youth and either replicate or build-upon the experiences that they had in their own early years. Here’s our list of the best 12 Indie RPGs.