If you’re reading this review, then I’d be willing to bet a lot of money — maybe even a crisp fiver — that you’ve heard of Ticket to Ride. Even if you’re here because you’re curious about whether you should take the step of purchasing it as your only board game, there’s no arguing against the fact that Alan R. Moon’s take on route-building is a bonafide classic. Having recently reached its fifteenth birthday, Days of Wonder have chosen to celebrate Ticket to Ride with a gorgeous new edition — let’s find out if it’s worth the near £100 asking price. 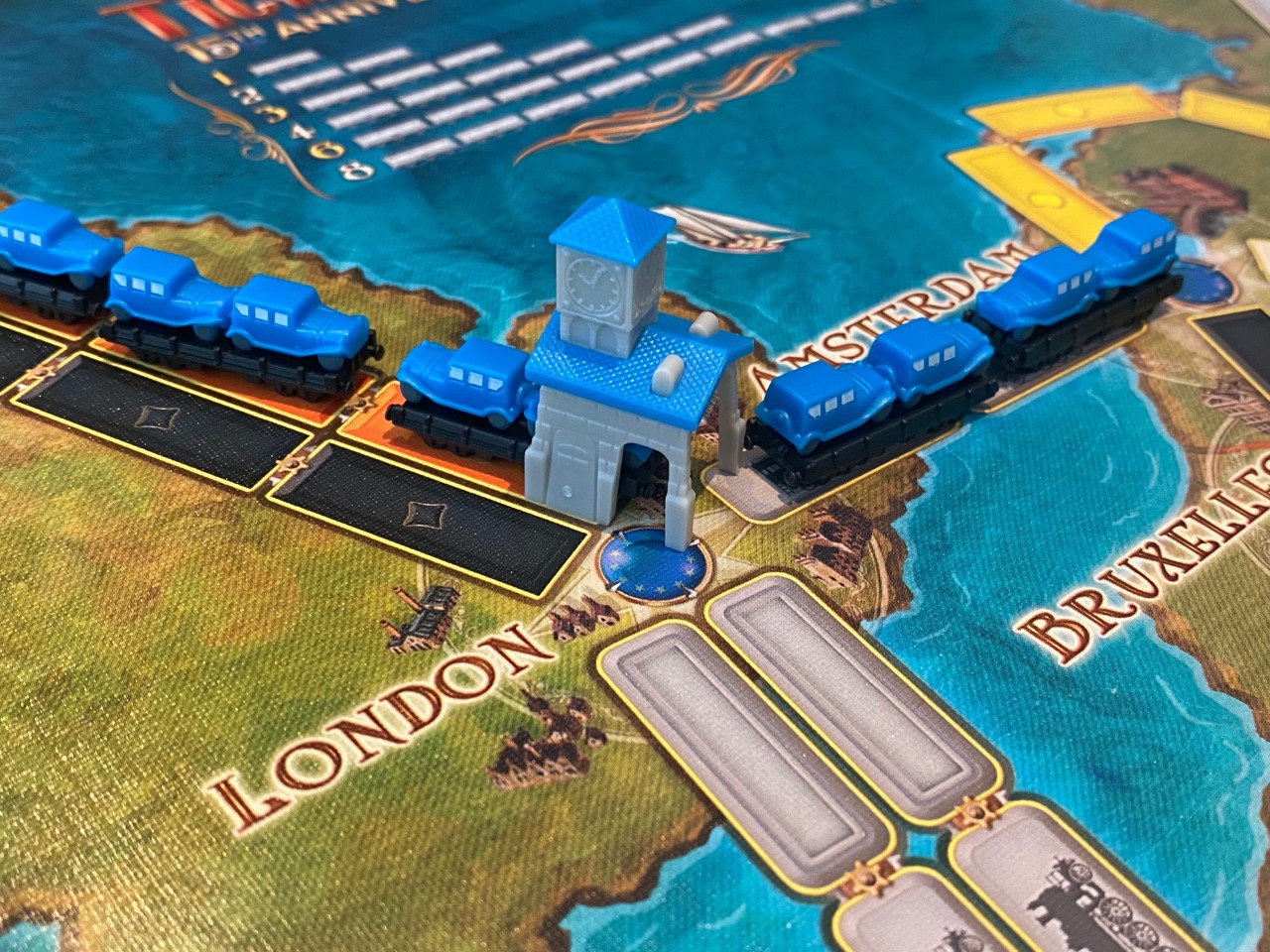 Beneath the board, a decent insert cradles pieces for five players, each set of which is presented in a colourful metal tin featuring the branding of a fictional train company. To the side, you’ll find slots for the scoring marker associated with each colour — and taking up a lot more real estate than needed in the insert, but considering the size of the board there was always going to be wasted space here. The final thing you’ll see in the box (aside from the manual) are the cards.

There are decks here for the standard game, plus all expansions released for the Europe map to date — these include the Big Cities, 1912 and Orient Express decks, plus a Ticket to Ride with Max promo. These variants are all minor tweaks to routes players will try to fulfill and don’t really change the mechanics of the game, but it’s nice to see some variety. 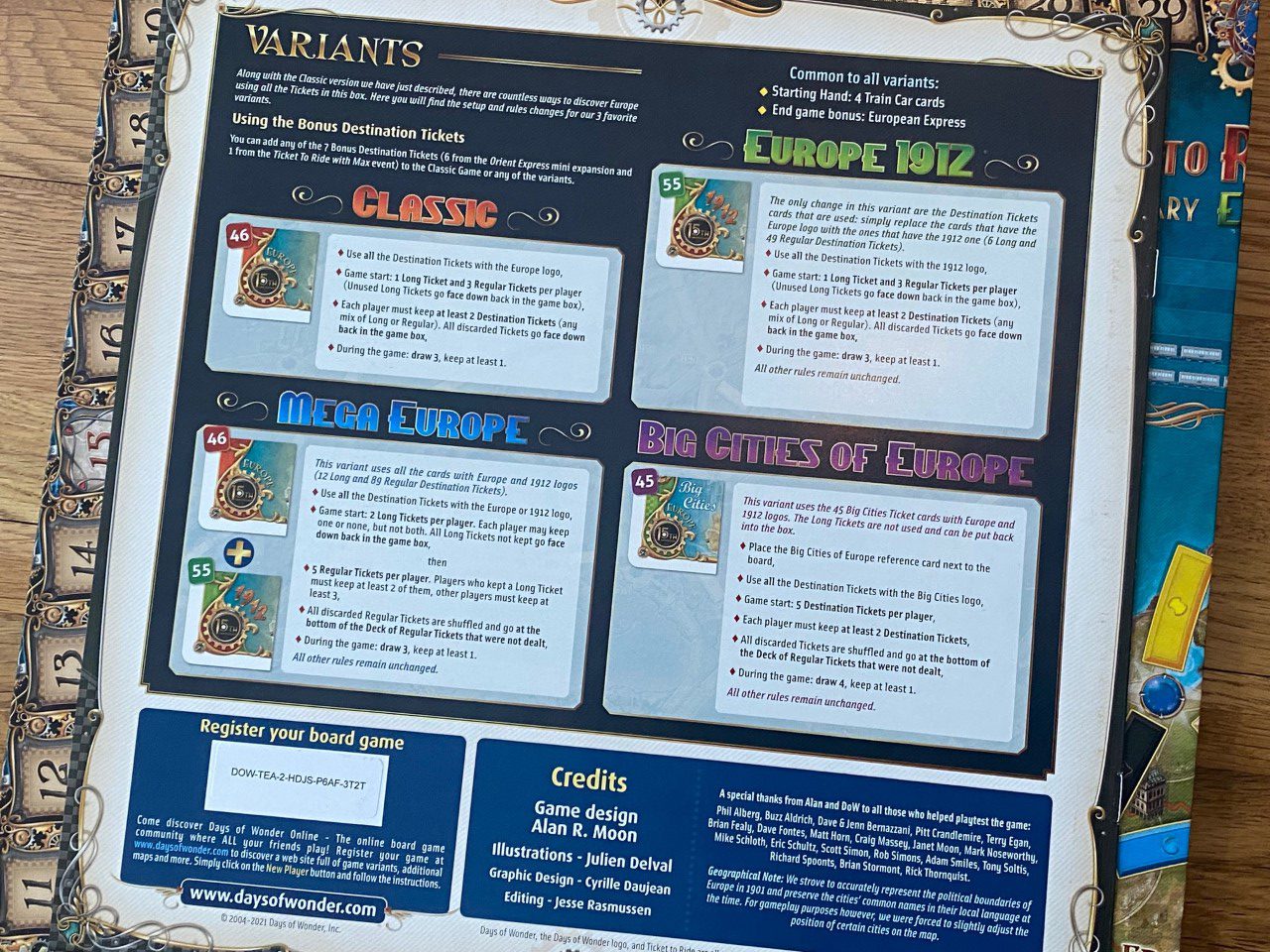 Now, before I take a closer look at some of these components, I’d like to quickly nod at what isn’t here. There’s really just one big omission for me — the board in Ticket to Ride: 15th Anniversary Edition is single-sided and because the components are larger than the regular version, you’ll never be able to use them on other maps (unless they release giant versions separately).

I think this is a shame — I’d love to have seen perhaps the best selling “alternate” map (maybe the USA) being printed on the other side, and it doesn’t seem much of a stretch to have included the cards to support such an inclusion. That, alone, would probably have been a big step towards justifying the asking price. 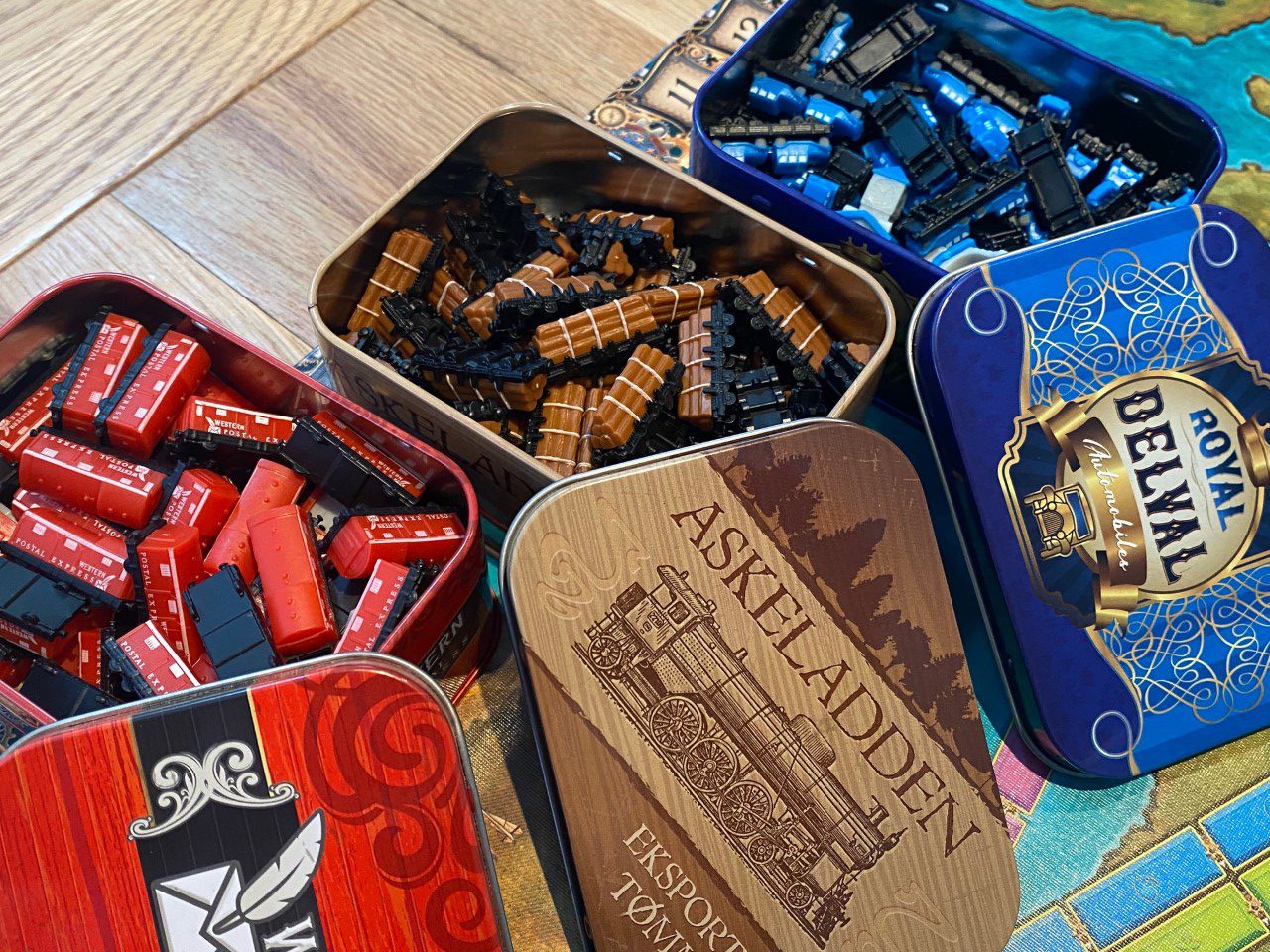 Now back to what is here, let’s talk about the side of the board that is printed. Basically, it’s a giant version of the Ticket to Ride: Europe board, and with bolder, brighter colours and loads of small details, it looks absolutely gorgeous. I really do mean that — Ticket to Ride: 15th Anniversary Edition has one of the finest boards that I’ve ever seen. Things only get better when you start opening those tins as well. Each colour is filled with unique rail cars ranging from mail carriages (red) to car transporters (blue) and giant reels of cable (grey.) Lumber (brown) and oil or similar (pink) round out the set. These rail cars are finely sculpted and painted (with the exception of a few misprints) and look absolutely fantastic on the beautiful board.

The ticket and train cards are also impressive, at least on the front. The train images look brighter and bolder than the standard game, and I really like the new design for the locomotive cards, which is very stylish. The ticket cards are just what the game needs — clear information that allows the player to assess where the journey leads, without giving anything away by forcing players to check the board. The instruction manual is just about identical to the classic version of the game, albeit that it adds a handy summary for the variants on the rear. 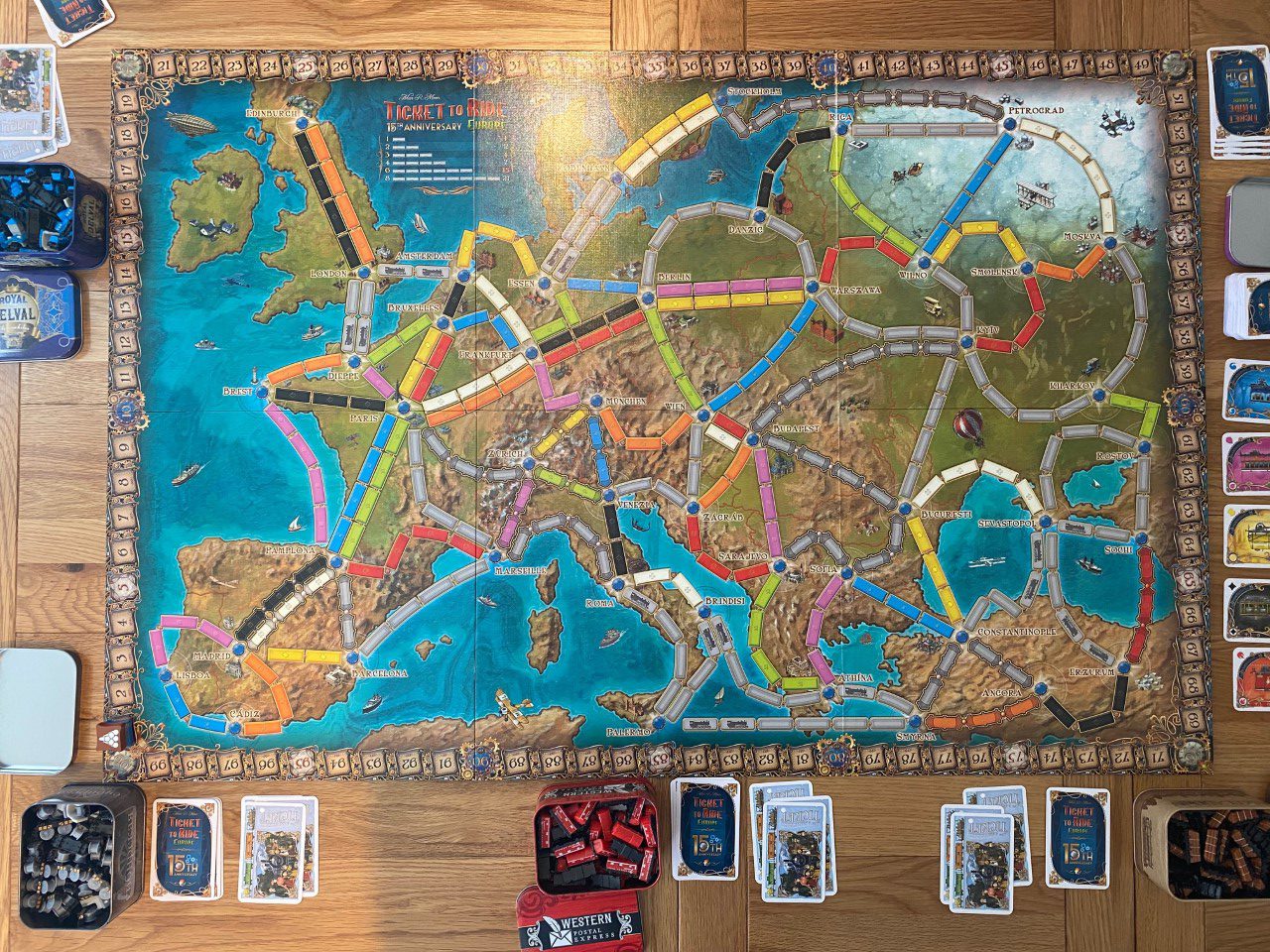 There’s a small cautionary note here though, which is for two kinds of players. Firstly, if you’ve never played a Ticket to Ride game before, then consider one of the smaller versions (such as Ticket to Ride: London) as your entry point. Those versions are shorter and much, much cheaper, so you should be able to get a good idea of whether you like the game before you spend big money. The other kind of player who should be careful are those who have multiple expansions for their base game – unless the plan is to show off the base game in maximum glory, then you’ll end up owning Ticket to Ride: 15th Anniversary Edition but more often than not you’ll actually be playing your standard edition with the smaller expansion boards (etc) which won’t be compatible with Anniversary Edition trains. 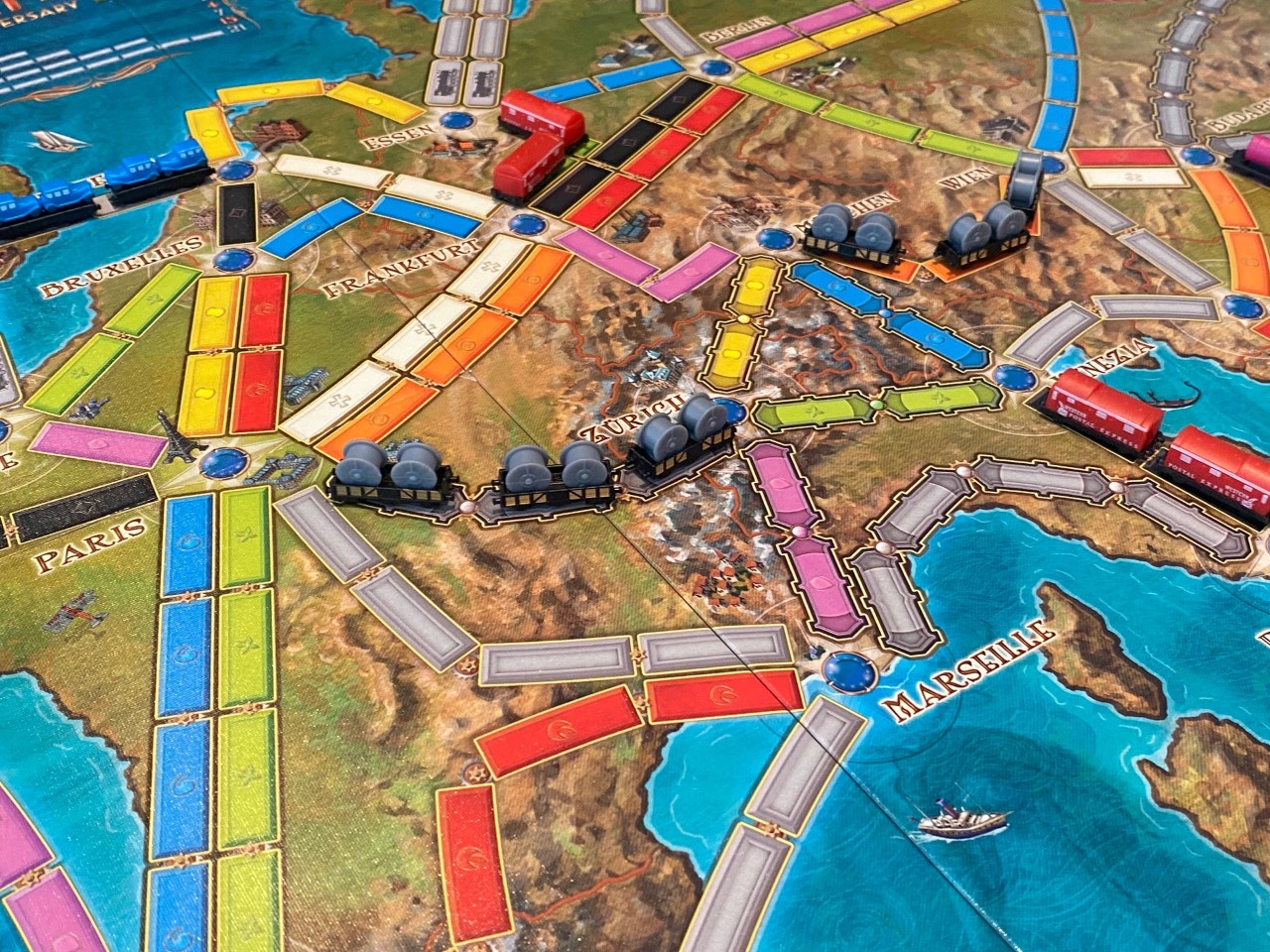 You can find Ticket to Ride: 15th Anniversary Edition at your local game shop, or you can check out BoardGamePrices.

Small World of Warcraft is late to the party, but it comes with beer and snacks,…