Yikes, I hate the term waifu – but it is what it is. 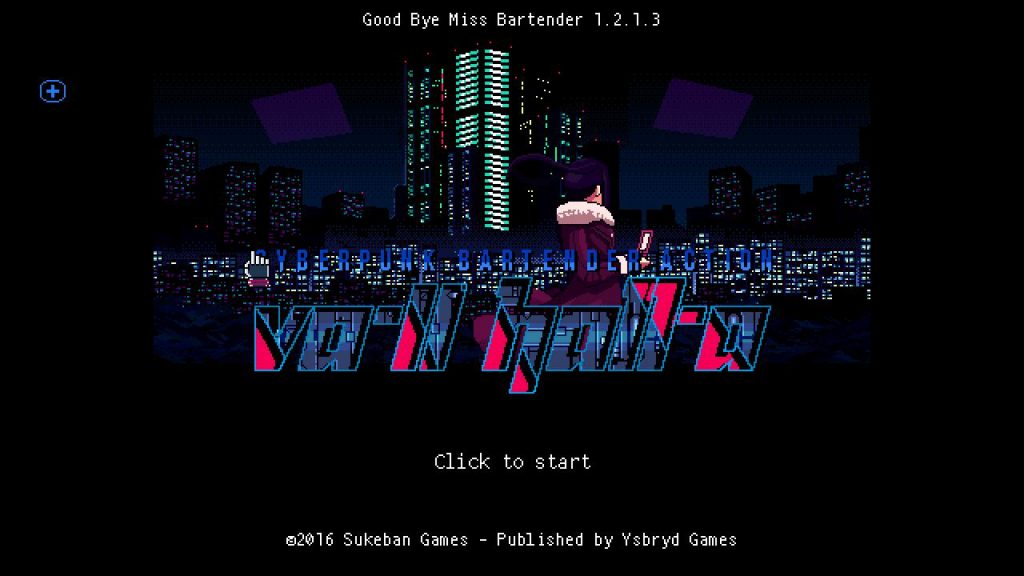 VA-11 Hall-A: Cyberpunk Bartender Action is – you guessed it – a cyberpunk themed bar sim. Well, at its core at least, there is, in fact, way more to the game than that. This title is a visual novel with some bartender game-play in a retrofuturistic style, combining more vintage, pixel game visuals with futuristic subject matter and music.

Right away I want to mention the music. If you love synth, if you are subscribed to NewRetroWave on Youtube or if you just can’t get enough of that 80s-sci-fi sound, then this is the soundtrack for you. What’s even better is that you can pick and choose the songs on the jukebox, so you always have excellent tunes to listen to while you serve your (very strange) customers. There are songs to unlock as you play too, which is pretty cool. You can also access the music from your character’s phone on the main screen. The music really helps envelop you in the futuristic atmosphere of this title and it is awesome.

The opening sequence sets the scene – a dystopian city in a future where many people are unhappy. The opening tone is quite serious in contrast with the overall humorous vibe of the game. This could perhaps be expressed as ‘dark humour’. Though the game is indeed funny, a lot of the themes and situations discussed are quite serious. I think it is really masterful to be able to combine these in the dialogue in a way that works. 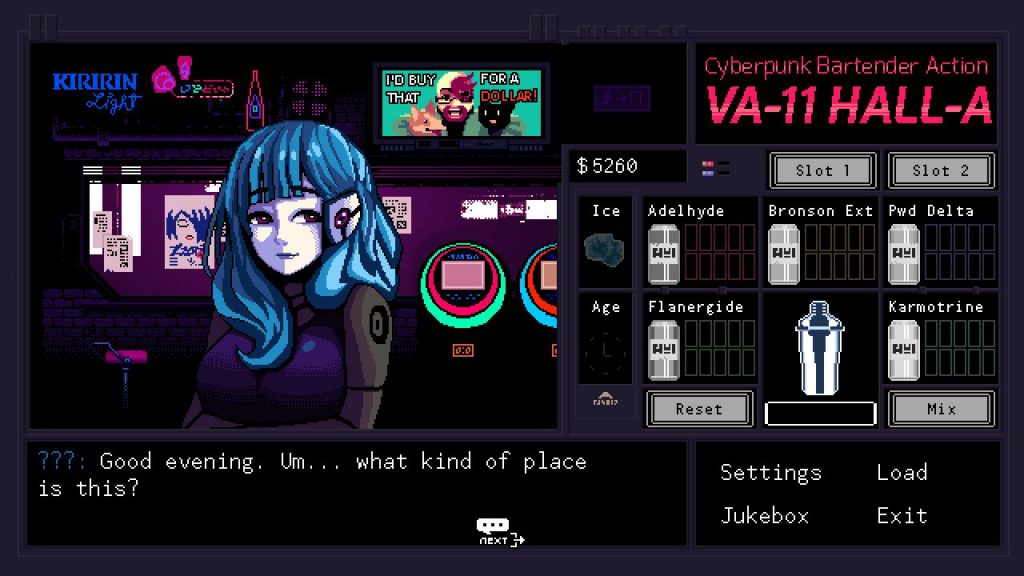 You play as a bartender working in a ‘hellhole’ bar called VA-11 HALL-A, nicknamed Valhalla. You will serve and work with a wide variety of interesting characters, who’s stories you will come to discover as you play. The main character, Jill, is observant, witty and sharp. Through her you learn about the characters around you in an enjoyable and comedic way. Unlike other visual novels, you don’t get to choose options or direct the story very much, which is slightly disappointing but the engaging characters mostly make up for that. The writing is good, which is vital to visual novels and story based games – you won’t be disappointed with the playful but also profound dialogue. You’ll meet idols, hackers, cynical old men, robots and more!

The controls for this game are basic and easy to learn. There isn’t really that much gameplay involved, though compared to classic visual novels (in which you just click responses) there is more player involvement courtesy of the bar-sim aspect of this title. All you have to do is mix up different drinks, which can be fun and sometimes addictive. The drinks themselves have hilarious names and cool visuals, I personally love the ‘manly’ drinks like ‘Gut Punch’ and ‘Suplex’. Sometimes you will have to recall stories about drinks heard from your clients or remember drink descriptions to supply the right drink to your customer, which adds a touch of challenge to the game. You also have to manage money, and depending on how you do this will affect the ending of the game, which is a nice feature.

This game is the kind you can jump into when you have some spare time, as it is broken up into small convenient chapters or shifts in this case. One of the features of this game that I like the most is actually the main menu interface (where you can save/load). It is shown as Jill’s room and you can access her phone to read Glitch City news, blog posts and play the soundtrack. I love that you can buy things for your little pixel room, such as holo-plants, posters, games and more. It is a fun addition, but make sure you save enough money for rent! 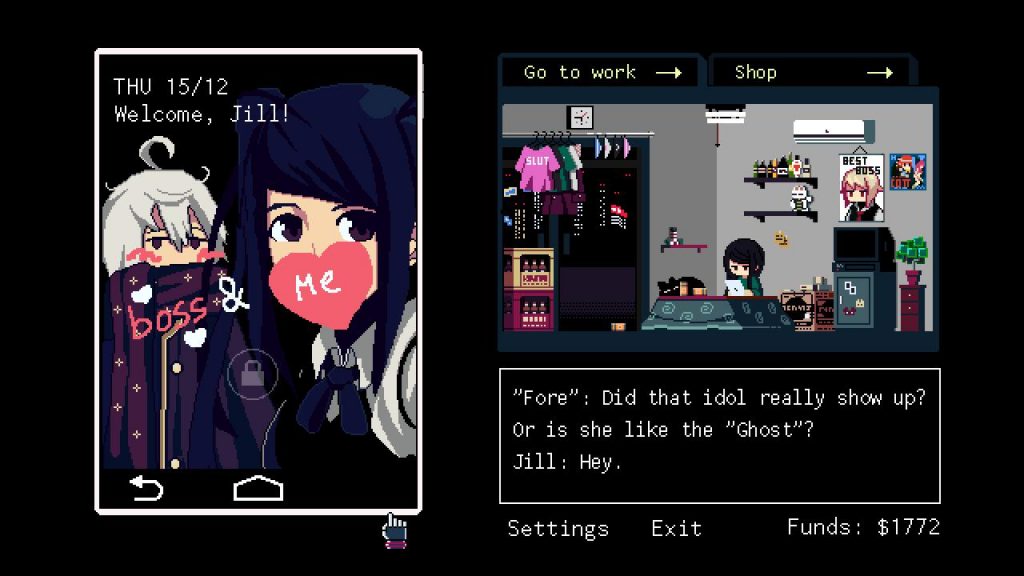 This is obviously an anime-inspired game and features many common tropes found in anime visual novels (mainly cute girls, flirting and sexual themes) but even if waifus and anime-fan service makes you cringe, this game is still enjoyable (trust me). It almost makes fun of these tropes because of the wit and self-aware nature of the game.

The qualms I have with this game come from a moral standpoint, mainly surrounding the character Dorothy – a robotic sex worker with a child’s body. I realise that this is a comedy and therefore her sex work is portrayed in a light-hearted, comedic way (albeit very explicit) – however, I’m not sure such a thing should be dismissed in such a nonchalant manner. Dorothy has no problems with it herself, having the option to ‘mature’ her body at some stage, but choosing not to. The wikia page lists her ‘mental age’ at 24, but in my opinion this is irrelevant and almost a way to justify what her character does, especially since the wikia page also states that there are several references to Lolita surrounding Dorothy, as well as noting that her model (DFC) refers to the term ‘delicious flat chest’, which is somewhat creepy.

The sexualisation of young girls, which is quite common in anime unfortunately, has always been something that turned me away from the genre and this is no different. The story is both comedic and perceptive, so one could argue that the game is using Dorothy to explore this trope. However, I still found it quite uncomfortable to deal with and I’m sure many fan-boys will want to jump down my throat screaming ‘it is only a game!’. I believe that by portraying young girls as sexual objects, whether it be in cartoons or games, in a funny, light-hearted or in an anyway positive manner is only normalising it and taking away the horror and disgust that we should be associating with it. I’m not trying to say the developers are bad people – as I have said, this is now a trope in anime/anime-style games and they may see no harm in it (and again, they may actually be commenting on this trope rather than justifying it). This is just how I feel, as a reviewer. I did not see the necessity of making her body underage, as her jokes about being a sex worker could still have been funny if she was in an older body.

Regardless of how they try and mask the situation – be it with robot bodies etc, it is still a child’s body being used for sex. I do not doubt that this would occur in a dystopian future like in this game, why, there are already sex dolls/robots that are made to look like children in real life. A good example of this in media is the anime movie Ghost in the Shell 2, in which there are robots that look like children being produced for sexual purposes, however this is not portrayed in a nonchalant or positive way at all. It is not the fact this character exists that is the issue, it is the way that her situation is portrayed as cute and funny and how this normalises such a thing. I am a reasonable person, I believe we should have characters and backgrounds of all kinds – sexual, graphic, violent and horrific if a developer wishes, because that is often how the real world is, but I don’t believe we should be normalising or making light of paedophilia.

Of course, most people will find this aspect of Dorothy to be awful, or rather find the fact that there is a demand for underage sex robots awful – that is the normal response, but due to anime tropes and the popularity of the ‘lolicon’ genre, this is also catering to people who are perverted in that way. 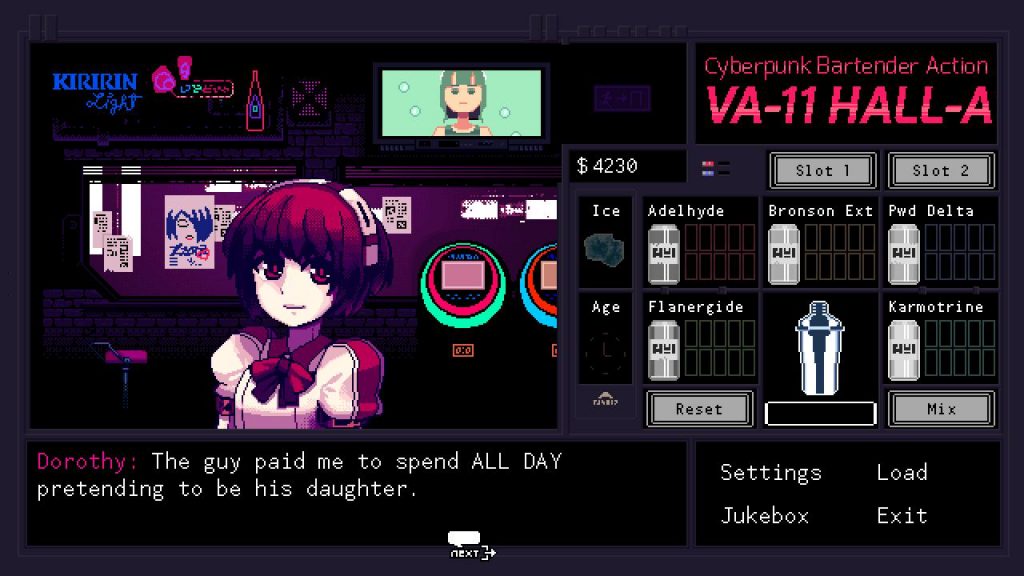 On the other hand, the way Dorothy is depicted also has some good points. Sex workers are often portrayed as bad people, or simply objects for sex without any feelings or background. Dorothy is a fleshed out character with hopes and dreams and is fully aware of what her work is, but doesn’t let that affect her personality. It is just a pity that she is in a child’s body and admits to being involved in sexual age-play in a way that seems to be condoning it by making it appear cute and humorous.

I am not discrediting the many aspects of the game that are creative, insightful and frankly, amazingly well done and overall, VA-11 HALL-A is a fun and thought-provoking game with great visuals and even better music.