Dead of Winter is the first game in Plaid Hat Games’ Crossroads Series, which now also features Dead of Winter expandalone game, The Long Night. The game is set in a bleak, post-apocalyptic world in which players take control of a colony of survivors battling against the starvation, zombies and the freezing winter, not to mention the possibility of traitors from within. Each player begins the game with two survivors and a secret objective for their own personal faction, giving Dead of Winter an unpredictable cooperative sub-theme.

The first thing to note about Dead of Winter is that the box contains an absolute ton of stuff, which I think is made possible only because of the use of cardboard standees instead of the usual plastic miniatures. This inspired choice means that Dead of Winter is able to pack in thirty individual player characters, plus a literal horde of zombies, where it would have been cost prohibitive to do so with plastic. There is also a large amount of other card stock in Dead of Winter, including cards for resources, colony objectives, faction and exiled objectives, character cards and more, plus several distinct tokens, a pile of D6’s and the now infamous Exposure Dice. 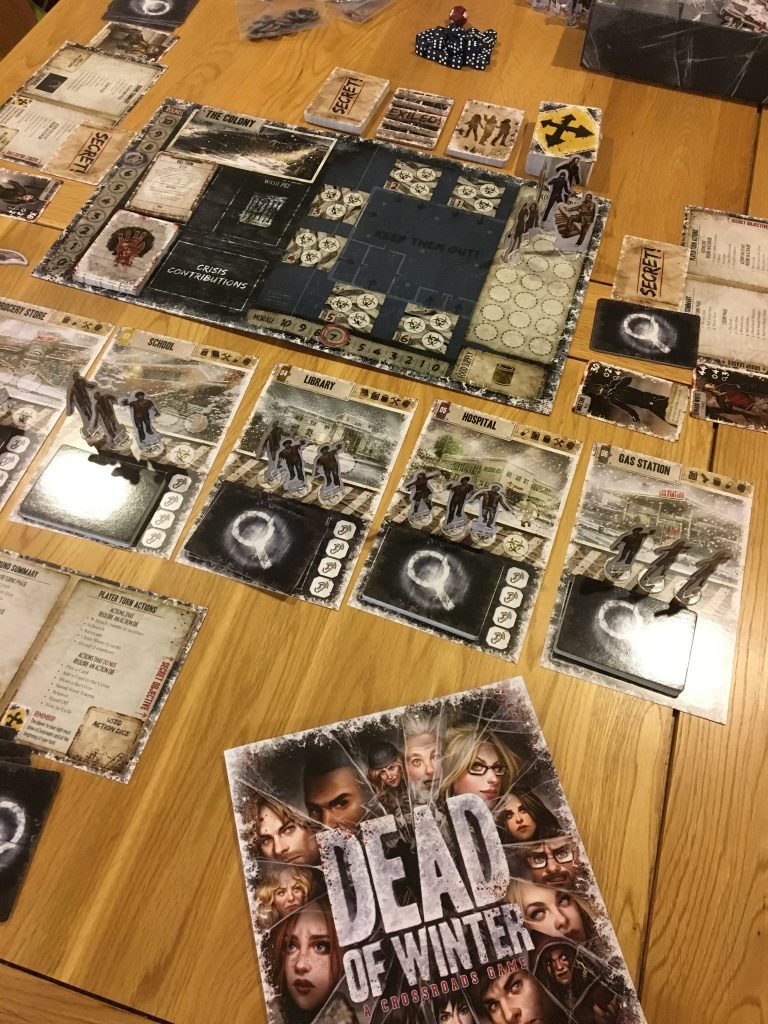 Aside from popping out about two hundred pieces of cardboard the very first time I opened it, the second thing I noted about Dead of Winter was just how easy it is to setup, and how quick it is to learn at a principle level. Almost any player can relate to the zombie apocalypse theme, and the idea of both a communal and a private objective is highly synergistic with popular culture on the same theme. What initially seems like a daunting range of cards and counters is easily sorted and stacked besides the board, with an objective card clearly instructing players on the finishing touches such as the number of rounds, starting morale and which (if any) locations are already infested by zombies.

The game uses action dice to determine what players are able to achieve on their turn, and players roll several (depending on how many survivors are in their personal faction, plus some modifiers) to determine what they can do. Most actions (such as moving or attacking) require at least a three on the action dice, and as players use their actions, they simply remove dice from their player card. Moving around the game world can be dangerous however, and whenever players move to a new location or attack a zombie, they must roll the exposure die. 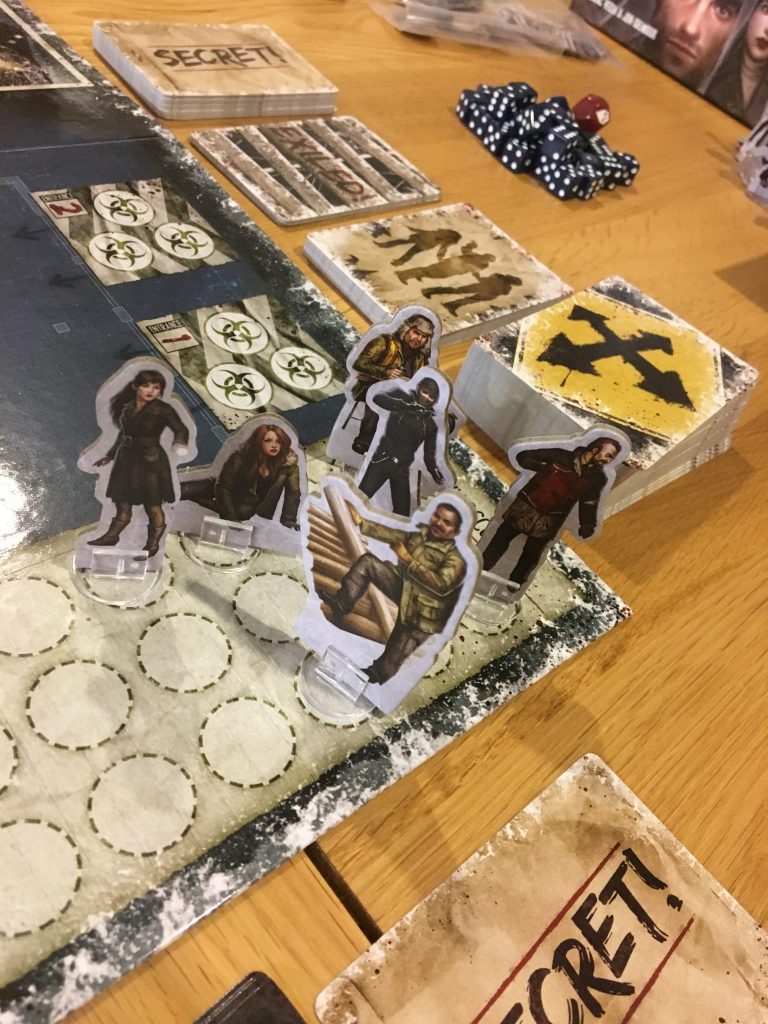 I wrote earlier that this die is now infamous among gamers, and now I can see why! Half of the faces of this die are blank, but the other half contain either single wounds (not too bad) frostbite (a single wound that causes another wound each turn) and a bite, which simply kills that survivor, end of discussion. What’s more, if the bitten player is in the same location as other survivors, then the bite spreads, and beginning with the character with the least influence, each must either choose to kill themselves or roll the dice again. This time, if anything other than a blank face is rolled, the bite kills them and moves to the next least influential player and so on.

This is brutally unfair by boardgaming standards, but it is testament to the thematic power of Dead of Winter that it feels absolutely right for this game, and the relative abundance of other characters makes it easier to swallow. Plaid Hat Games have absolutely nailed the dramatic tension and constant, unpredictable threat that my favourite zombie movies (and series) do so well. In gaming terms, imagine being part-way through the game and having laid out your action die and planned your turn, only to have someone bitten on your first move. Now your friend has to decide if she’ll do the honourable thing or roll the dice – she rolls and she dies too – now it’s back to you. You stop the spread, but at the cost of another survivor. In a single action, your personal faction has lost two survivors – perhaps even been wiped out – and at best, your best laid plans are now in tatters. 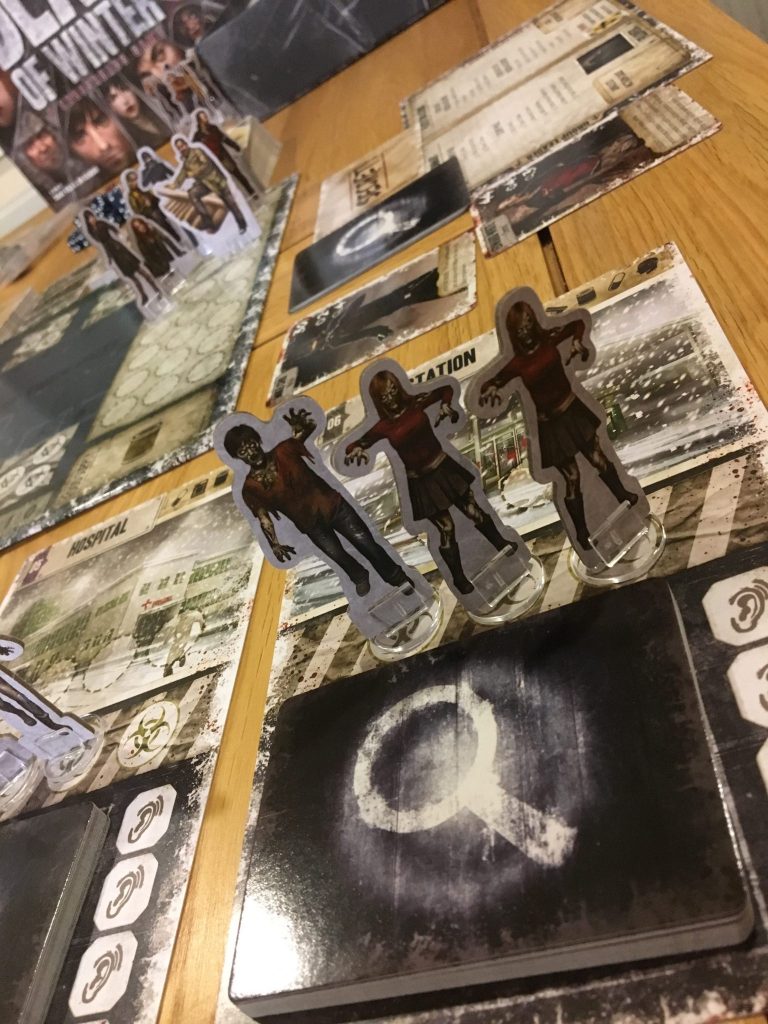 This brings me on to player objectives, crises and the Crossroads cards. What might cause your friend to roll that dice and not sacrifice her character for the good of the colony? Maybe she has been dealt the Cult Leader “Betrayal” objective, which means that she wins only in the event that colony morale is at zero, and she has two more survivors than anyone else. Or maybe she just felt lucky, and thought she could save you all with a blank die roll. Similarly, why did you send your survivor out in the first place? Was he gathering medicine for the current crisis event, or were you simply looking for anything because of your personal Hoarder objective?

Against the backdrop of these colony and personal objectives, players must also draw a crossroads card each turn which may or may not resolve, depending on context sensitive circumstances. There is also a crisis to resolve each turn, and whilst few have catastrophic effects in the event of failure, all are serious enough to be taken seriously. At the beginning of each game, you’ll be working with your friends to resolve the crisis at hand, whilst also discussing the broader objective. Within a few turns, you’ll be questioning each others motives and working out how you can achieve your own objective without giving it away. Part of why Dead of Winter is so easy to teach is because it allows people to act more or less completely naturally, within the construct of the totally unnatural phenomena that is a zombie outbreak. 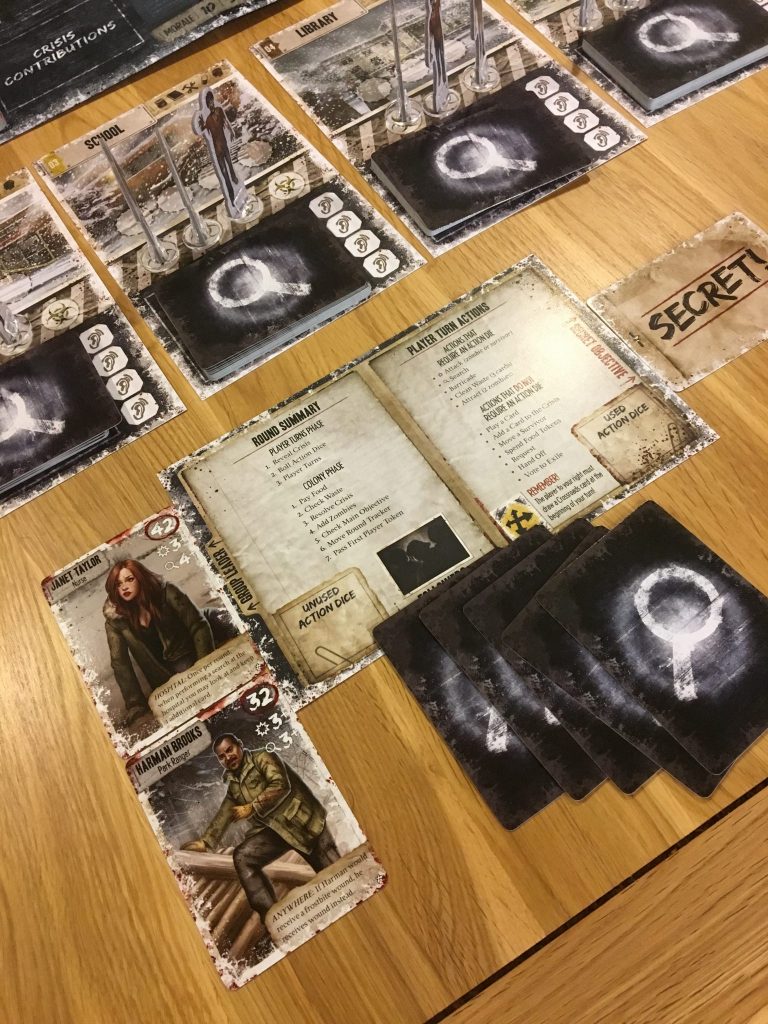 Then there are Crossroads cards, which occasionally work as they should, often don’t work at all, and sometimes blow up in spectacular and ridiculous ways. One basically reads that if Sparky the dog is present in the colony, then another survivor teaches him how to shoot a gun, and gives players the option to either dispatch eight zombies, or raise morale by one. This one rarely happens, and when it does, you’ll all have a good laugh at it. On the flipside, the Hostage Crossroads card offers three choices, all of which relate to one of the other colonists being taken hostage, acting a bit like a mini crisis.

Between colony objectives, faction objectives and Crossroads cards, Dead of Winter has a genuine knack for enabling players to create organic, living stories that will make them laugh, cry and cheer out loud. It’s possible to lose everything in just the first couple of turns, but more often than not, games go right to the wire. Whilst there is often no clear winner (based on the objective cards at least) it’s great fun to reach a victory or failure condition and then reveal your cards, only for your friends to exclaim together “so THAT’S where all the medicine cards went!” 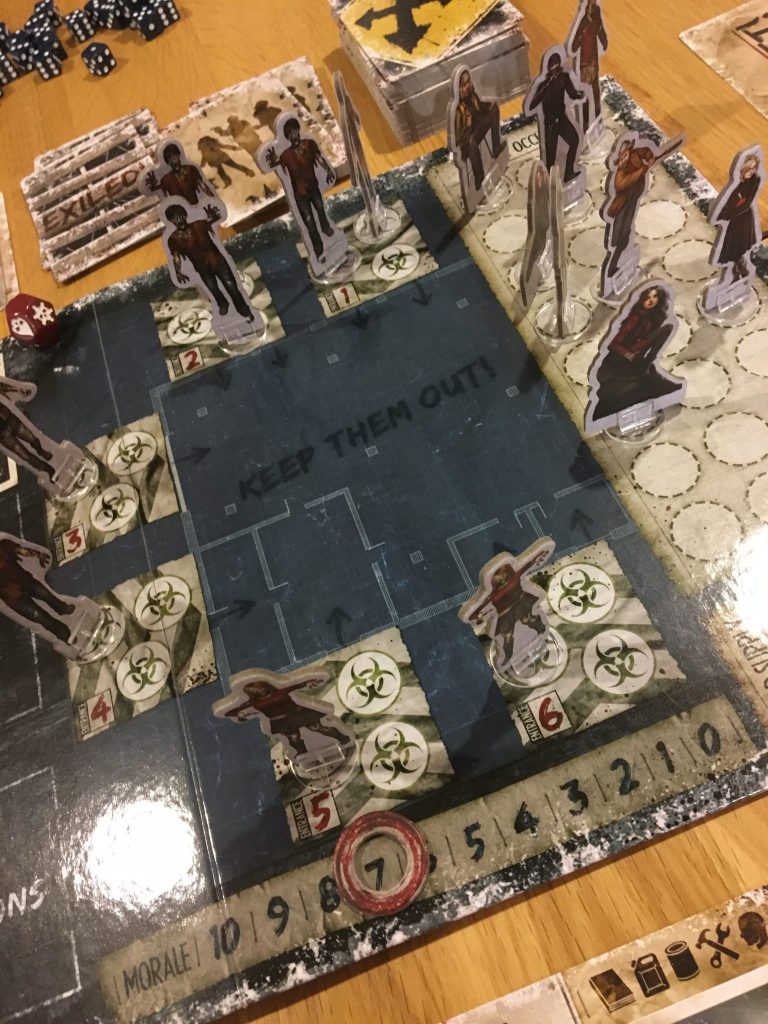 It is the storytelling toolkit that Dead of Winter provides that means I like it as much as I do. The ability to choose your own adventure within a non-linear structure, based on a set of simple rules and interactions is really powerful, and it’s fun to replay lots and lots of times. You may think that all these different cards are only fun once, but there is so much randomisation between objectives, resources drawn, when crises and Crossroads cards happen that you really never have the same experience twice.

I really do recommend Dead of Winter to fans of zombie movies or shows, and to fans of board games that love to have a laugh with friends. Don’t be put off (as I was for so long) by what looks like a complex setup and a lot of pieces – Dead of Winter really isn’t that daunting. It’s a game about reading cards, reading your friends and staying within a really simple rule structure, and it just works so, so well.

Battlelands: Aftermath Edition — simplicity and accessibility yet a lack of depth