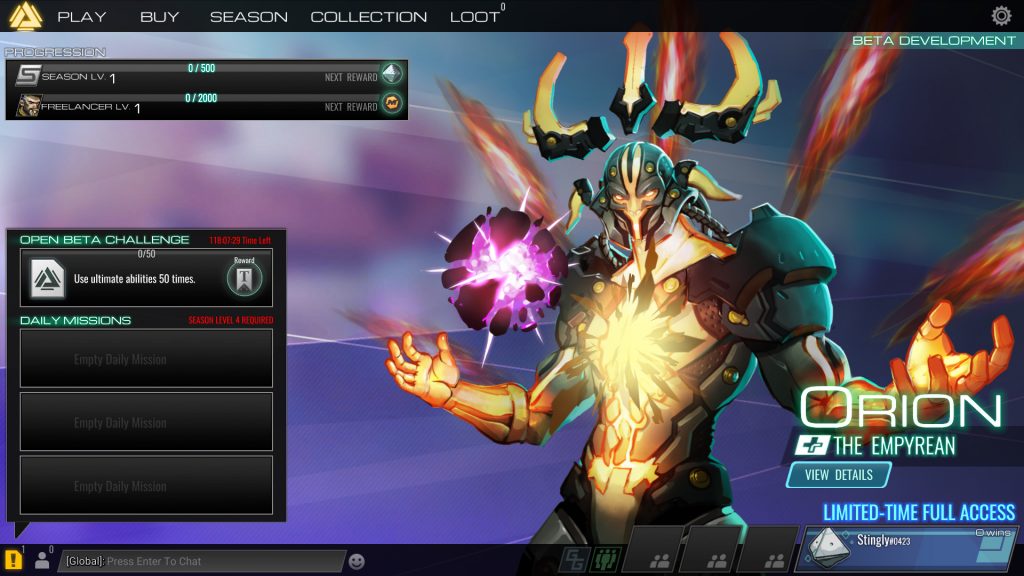 Way back in the early nineties, in order to enjoy games with your friends you used to have to actually go round to that friend’s house (or Internet Cafe – remember those?!) and play with them in person. One of my friends had Syndicate, the original turn-based strategy game in which you controlled a small team of 4 cyborgs and had to complete various missions. My friends and I would name each of the characters as ourselves and control them as and when required. Atlas Reactor takes that concept and drags it kicking and screaming into the 21st century! It’s a turn-based strategy game, sure, but one in which you control a sole character (or freelancer as they are named in-game). You then team up with 3 other people from around the world and set out to vanquish the opposing team, not dissimilarly to Frozen Synapse. The arena’s are small, but with plenty of cover, and the playable characters are numerous and varied. And, oh boy, can you customise them!

The different classifications of freelancer are; Firepower, Frontline and Support. Each classification has a number of playable characters, and each one has their own unique skills and playing style. If that wasn’t enough for you, these skills can be customised with additional modifiers that do things like extra damage, or to reveal the enemy, slow them down, weaken them etc. Then there are catalysts, which are one-off power-ups, that you can customise.

Oh yeah, and you can customise the freelancers by unlocking new skins, and taunts (which are like small cutscenes when you use a specific ability). And you can customise your banner with a new emblem or background (all unlockable), adding a title and choosing what statistic you wish to display to others.

If you’re starting to think that the developers want you to personalise this game, you might be right!

Each freelancer can be levelled up through play, as can the player himself. As you level up, so you unlock new features and abilities, such as daily missions. You also unlock loot crates which contain the aforementioned banners, taunts, skins etc. Of course you can buy loot crates too, but I personally prefer to earn my stuff rather than to throw money at it.

Let’s get down to business

The matches in Atlas Reactor are split into 5 phases, these being Decision, Prep, Dash, Blast and Move. In the decision phase you can choose which ability to use (some are “free” abilities meaning that you can select a second one too). The abilities are categorised into one of the 3 middle phases, and will play out at that point in the turn. You can also choose whether to move after you use an ability, assuming you’re still alive that is!

If all of this seems a little daunting, have no fear. There is a short tutorial that walks you through the game mechanics, and how each turn plays out. Another really helpful thing was something that I stumbled across when looking at the skill modifiers. When you are in the pre-game screens and you hover over a skill, you are treated to a little video that shows you exactly how that skill works. It’s a really neat feature and one that is to be commended for its helpfulness to new players.

When you come to actually play, you have a choice of 5 different game modes. These being Practice, Vs Bots, PVP, Ranked and Custom. Practice allows you to test out skills and abilities (yawn). Vs Bots lets you partner with real people and go up against the AI. The main mode (for me) though was PVP (Ranked only opened up towards the end of the Beta, so I haven’t had a lot of time playing it).

In the PVP mode, you choose your freelancer and his/her abilities, then wait as the matchmaker finds you a fight. You can do this singularly or with other people in your party. The game then selects you a level, and you’re treated to a screen that displays each player, their banner (hence why you want a cool one!), the freelancer they’re playing as and their loading status. You also get some handy tips to read as the game loads.

Ranked works a little differently. You enter a queue, then once you have found a match and a team you are given the option to ban any freelancer (as is the opposing team), then you each take turns to select which unique freelancer you want to play. Winning ranked games improves your overall rank in the game, but I didn’t get much opportunity to experiment with this at the time of writing.

Yeah yeah yeah, but is it pretty?

Why yes it is! The game plays from a 3D third person point of view. You have the ability to rotate and pan around the arena to your hearts content – but don’t take too long to choose your tactics as the decision phase is time-limited. As the turn plays out, so the camera automatically pans to the action. In the Prep and Blast phases, you watch each ability played out one-by-one. In the Dash and Move phases though it all happens at the same time.

Graphically Atlas Reactor is superb, with cell-shaded characters and stunning special effects. The taunt system is especially nice, as each character gets their own little cutscene before they use their ability. Sounds and music are bang on point too – though I did find that the menu music seemed to be on quite a short loop. Considering how much time you spend in the pre-game menus customising everything you could possibly wish for, it can be a little annoying.

I’m not sure about how Atlas Reactor will be monetized as during the open beta everything was freely available… There are so many things to unlock that I would imagine that they will probably offer bundles to players who wish to progress quicker, but I might be wrong. At the moment the only thing I have to go by is a pre-purchase screen on their website that allows you to pay for titles and skins etc.

Basically, if you like turn-based combat games, this is definitely worthy of your time. Atlas Reactor launches on October 4th 2016.