Set squarely within Norse mythology, Northgard sees you chasing down your father’s murderer across the newfound, titular continent. You must defeat all in your way as you strive to bring about both justice and revenge, all while retrieving your birthright and proving yourself a worthy king.

Northgard, by Shiro Games, is a tough game to classify It’s is somewhere between a 3D strategy game, but with some serious survival aspects added in. There are 3 main game modes, Campaign, Single Player and Multiplayer — each play slightly differently, but the core mechanics stay the same. 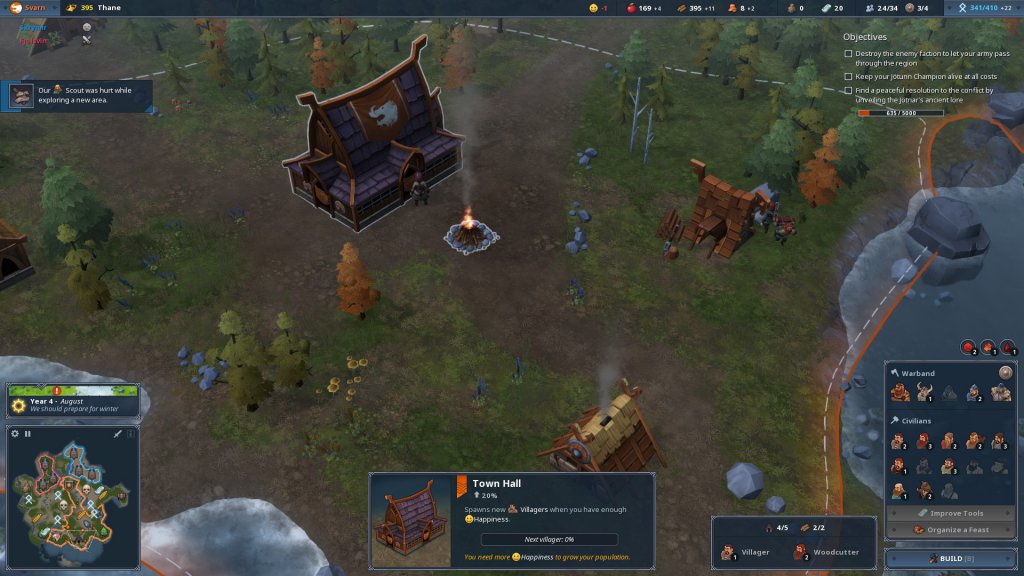 You start off with a town hall and 4 villagers in a corner of the map, on a beach. You have some food, wood, money, and your clan is happy. Villagers can scrounge for food, which is enough to sustain them, and can be used to construct additional buildings.

Once you construct a building and have a villager selected, you can right-click on the building to give the villager that trade, at which point they do that thing until you change their trade again. For example, one of the first buildings you construct is the Woodcutter. When you assign a villager to this building he or she becomes a woodcutter and starts chopping down trees, which increases the amount of wood you collect but decreases the amount of food (as they are no longer a “villager” and stop scrounging).

Each clan member consumes food and each building consumes wood (for upkeep and heating). Sounds pretty simple so far, right? Well, then you factor in the fact that you can only build a small number of buildings in each segment of the map, and you can’t colonise (or even see) another segment without first discovering it with a scout.

Scouts are trained in another building and are largely autonomous, continually discovering more and more segments of the map until they are killed or run out of areas to explore. Once you have uncloaked a new area you can send in your warriors to clear out any bad guys then colonise it by spending a large amount of food — which increases based on the number of segments you own.

You are then free to construct new buildings in this area in order to best exploit the resources within it, such as a Fisherman’s Hut in an area with fish, or a Hunter’s Lodge in an area with deer etc. Both of these allow you to collect a greater amount of food.

Your clan itself grows dependant on how happy they all are, which as you can imagine, changes as your clan grows. There is an “expected happiness” level, and an “actual happiness” level. So long as your clan are positively happy and you have enough houses, you’ll get a new villager every so often. 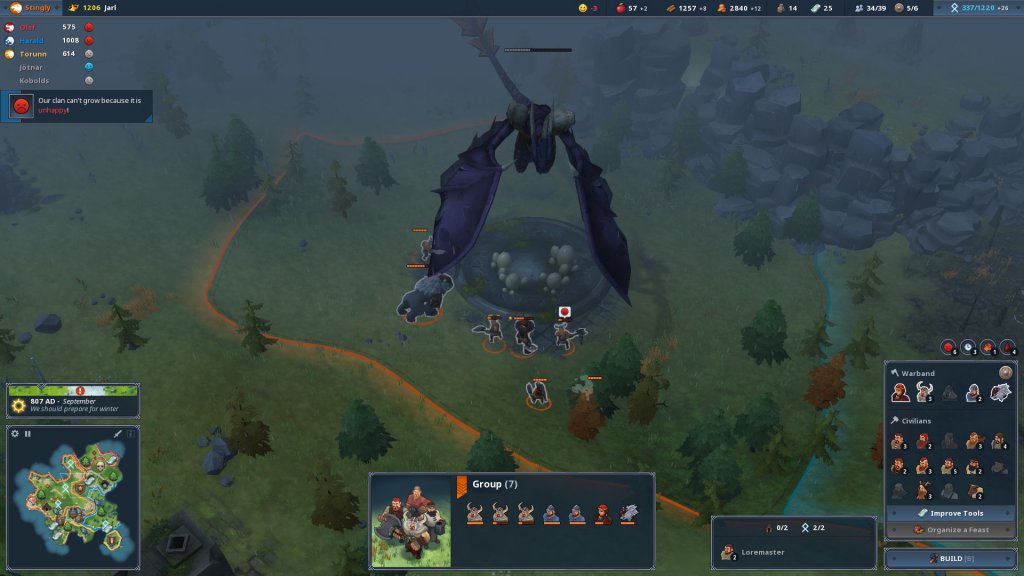 The game has a yearly cycle featuring 2 seasons, summer and winter. In the latter, crops don’t grow and your clan uses more wood for fuel than in the summer months. Also, your troops are less effective and then, just when you think you’ve got the whole thing sorted out, there are “disasters”. These play as random one-off events and have different effects. For instance, the blizzard drastically increases consumption of food and wood, usually causing you to bottom out any stockpiled resources. Then there are the rats, which bring plague and sickness, killing off your clan unless you have healers to heal, and food silos to protect your food. The list goes on.

To balance out these negatives, you are able to unlock new bonuses and modifiers through both the Lore tree (research) and by gaining Fame. The lore system is fairly simple, you acquire it gradually and by training Lore Masters who research holy stones, or by getting your sailors to raid far off lands in order to gain additional knowledge. Once you have enough lore you can spend it to unlock another step in one of 3 branches, which in turn modifies an element of the game. So for example one of the most useful modifiers is the one which stops your warband from being less effective in winter.

The fame system works slightly differently. You acquire fame through your deeds, be they colonising and exploring, ridding areas of wolf dens, or destroying legendary creatures — each act rewards you with fame. As you become more famous, your title will change and your people will respect you more. Additional benefits will also unlock depending on the clan you are playing as.

Enough about the mechanics already!

Wow that’s a lot of text to try and describe how a game works! It doesn’t actually cover everything, but I think that you should get the general idea that this game has a lot of depth, and it’s not just a simple zerg-rush style RTS.

In fact the number of actual attacking and defending units you train is very small — usually less than half a dozen in my experience. You can obviously play however you like, but I tend to find that going too attack-heavy causes serious imbalances elsewhere and then you end up with your clan freezing to death as a result of not being able to afford the upkeep on your buildings!

Graphically the game is presented with an almost cartoon-like quality, but it is incredibly well polished with a high-quality user interface. Audio is great too, and the man who does the voiceover work for the campaign cutscenes sounds authentic and solemn, setting the tone just right to convey the gravity of your quest. 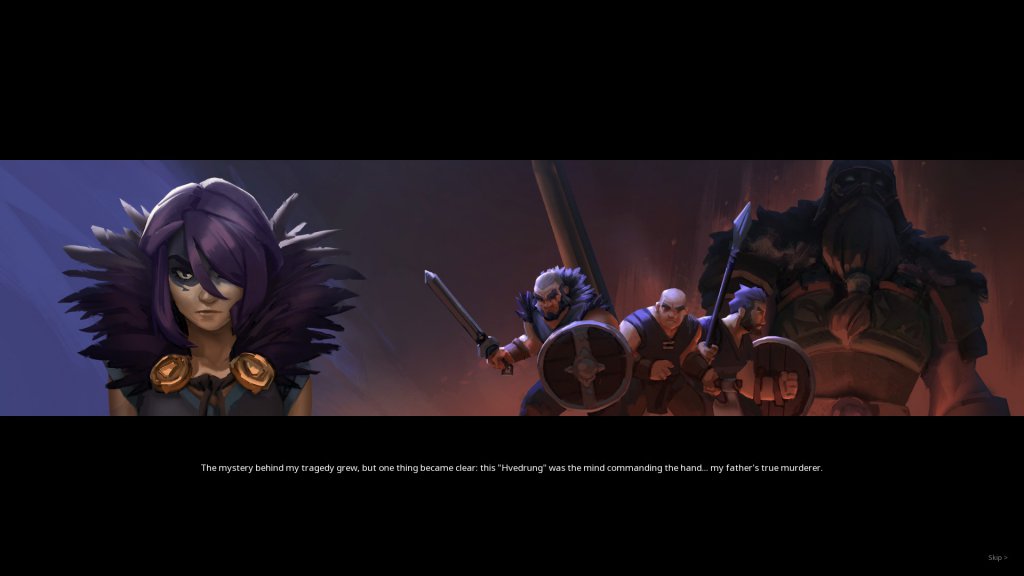 Talking about the campaign, this was by far my most enjoyed game mode. Each level requiring you to complete a different objective in a different way as to progress the story. Without revealing any spoilers, you become totally engrossed in the quest and all of its twists and turns. I loved it. In fact I loved it so much that I completed the whole thing before starting to write this review! 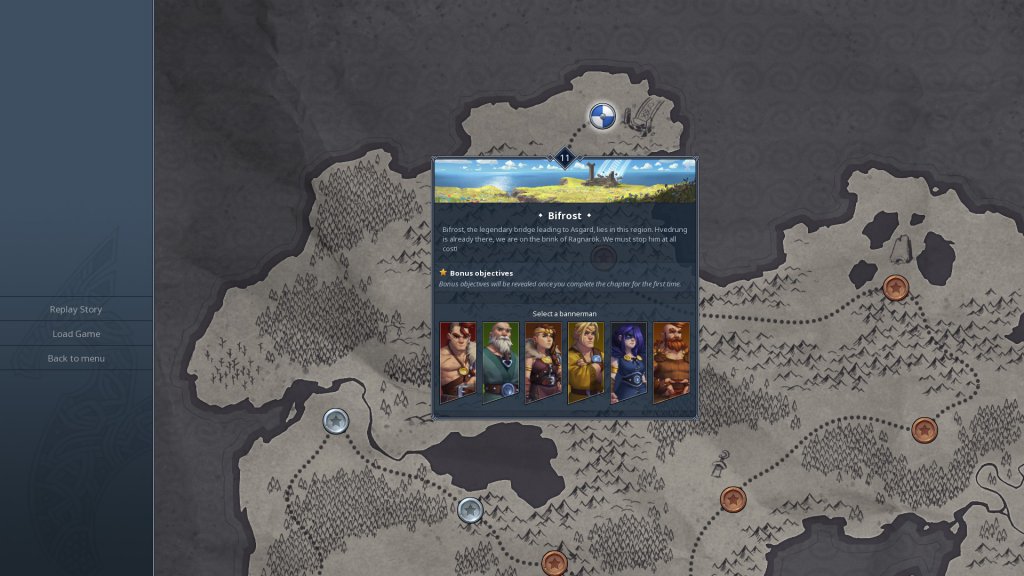 Once you complete the primary objectives for a level you can go back and complete newly unlocked secondary objectives, which adds an additional replay factor to complement the plethora of steam achievements that Northgard contains. There are also the 2 other game modes, these being single player and multiplayer.

Single player allows you to define map parameters including the number of AI clans, how aggressive the territory is, what the victory parameters are, and then sees you pit your skills against the computer in order to reach one of these conditions. I’ve played a couple of single player games and really enjoyed both of them — definitely a good addition to the game.

Multiplayer works similarly to single player, apart from with other players! There are different game modes too, in addition to the single player “free for all” you can also choose from “duel”, “team 2v2”, “team 3v3”, and “team 2v2v2” — each demanding slightly different play styles. It has to be said that the team battles are great fun: I played one where I was totally starved of food and wood and yet still won a “wisdom” victory as I was able to have loads of villagers scrounging for food while my lore masters did their thing, and all thanks to my teammates who both had huge warbands that were able to protect me!

There are very few parts of Northgard that I didn’t enjoy, to be honest. One minor annoyance is that when an in-game event occurs at a specific location on the map, the map pans to that location irrespective of what you were doing at the time. This is really not noticeable though on all but the very last level, wherein you receive reinforcements back at your town hall every so often, which can be very irritating considering that you were most likely in the midst of battle on the far side of the map!

Another irritant is that Northgard‘s combat system feels like it was not the primary development focus of the developers. It works and it’s fine, but it basically amounts to you pressing “E” to select all of your units and clicking on a map segment to send them all there. They then do their thing against whatever foe is present while you watch their health bars, occasionally selecting a unit that is being hurt and sending them back to safety to get healed. Then you press “E” again to go back to watching health bars. There are very little tactics involved, outside of choosing how many of the 3 different unit types to have in your warband. 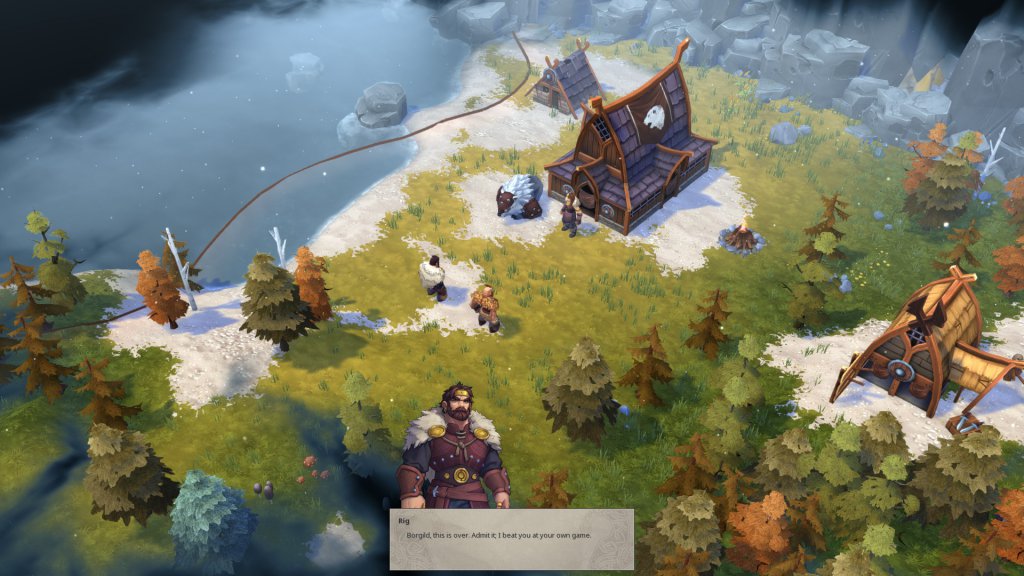 All in all though, I really enjoyed my time playing Northgard. The game is suitably complex and deep in most areas, and is so without feeling convoluted or overbearing. The way it plays is fluid and really easy to pick up, and the presentation is flawless.

I’ve spent 17 hours playing Northgard so far, and I don’t regret a minute of it. Great game.