Can you believe that Myst was released 25 years ago? To celebrate, Cyan Worlds has created a very special Kickstarter campaign, offering some exclusive, high quality reproductions of items from the series and artifacts from the making of the games.

While Cyan Worlds originally created Myst, Riven and Uru: Ages Beyond Myst, the other games in the series were created by other developers – so this Kickstarter edition is the first time that the whole series have been released together. Plus, Cyan Worlds has worked with gog.com to upgrade all seven to run on Windows 10. Not only that, but Cyan Worlds has worked with Idea Planet to bring a wealth of artifacts from the series to life. So it is no real surprise that their Kickstarter campaign reached its target of $247,000 USD (approximately £177,460) in just eight hours!

A pledge of $49 USD (approximately £34) gives you digital copies of all seven games from gog.com, while $99 USD (approximately £72) gives you the digital download plus physical DVD copies of the games in a 25th Anniversary Collection box that looks like the original Myst Linking book! This Kickstarter exclusive box set has blank journal pages to make notes while you play the game, and a hidden compartment.

At the higher tiers ($169 USD or approximately £123 and above), this 1:1 scale replica Linking book will have an active 800 x 480 digital screen that shows video fly-throughs from the games!

Cyan Worlds have also created a stunning replica of Gehn’s pen and inkwell from Riven – and it’s fully functioning, too! This beautiful replica has a black fountain pen and a die cast zinc alloy inkwell with antiqued brass plating in the shape of a beetle.

Finally, the top level tier (now sold out) gives each backer one of 25 original, hand-drawn concept sketches from Riven. These are the actual pencil sketches used when making the game – with many never seen before! 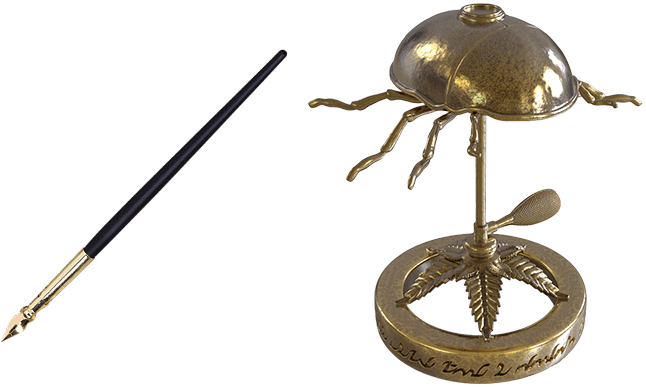 The original Myst was released in 1993 and was the best-selling PC game until it was overtaken by The Sims in 2002. The single-player, first-person point-and-click game was created by brothers Robyn and Rand Miller.

The player takes the role of the Stranger, who arrives at the island of Myst and has to solve puzzles and solve clues around the apparently deserted island. It has magical elements to it, as the player uses books to travel to explore new areas of the island, called ‘Ages’. Myst was particularly remarkable for its large, open world. The player starts the game on the island, with no obvious quests or objectives – the player must explore to start the game, and discover clues and puzzles for themselves. It is incredibly atmospheric, with minimal background music and a real sense of solitude throughout the island, which has no other inhabitants. The player cannot die or get injured, there is no time limit to completing the game and there are a huge mix of puzzles meaning it appeals to all ages. It also has multiple endings, which vary depending on the player’s decision at the final stage of the game.

Following the success of Myst, multiple sequels were released: Riven in 1997, Myst III: Exile in 2001, Myst IV: Revelation in 2004 and Myst V: End of Ages in 2005. Cyan Worlds also released third-person adventure game Uru: Ages Beyond Myst in 2003, which allows players to customise their avatar. Finally, realMyst: Masterpiece Edition is a visually enhanced version of the original game with enhanced graphics, created in the Unity engine and released in 2014.