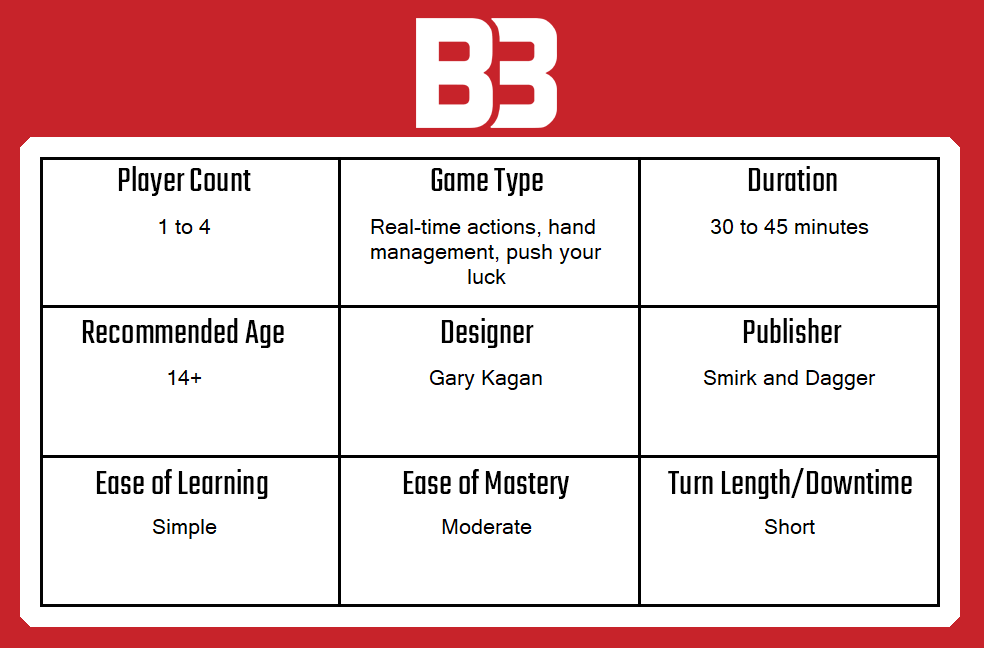 Get to your rig — this is gonna be one helluva shift. Be quick to sustain and stabilize patients and rush them to hospital. Manage your resources and upgrade your ambulance to save as many lives as possible. You only have seconds to act and the clock is against you. Try not to lose anyone today, rookie. ‘Rescue squad — confirm and depart.’ 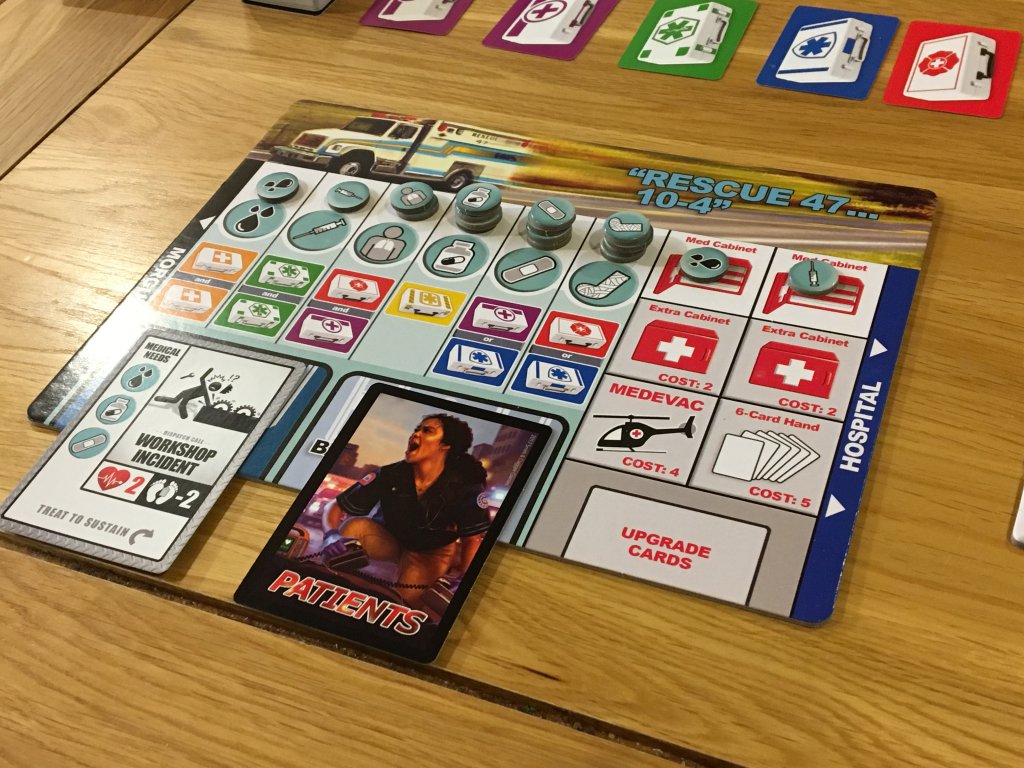 Paramedics: Clear! is an app-supported, real-time game in which one to four players strive to stabilise patients, then transport them to hospital. The game has a tongue-in-cheek feeling which prevents it from being gratuitous or overly serious — but even so, it feels suitably stressful to play thanks to the relentless stream of patients and an ever-dwindling amount of time in which to treat them.

Paramedics: Clear! is played over three rounds (or shifts) that each last as long as the shared deck of resource cards in the centre of the table, at which point play ends once everyone has had an even number of turns. The first shift allows players to take sixty seconds on each of their turns, whilst the second and third shifts allow forty-five and thirty seconds respectively.

On each turn, players use their own personal hand of five (or six, once an upgrade is purchased) coloured resource cards to buy medical supplies, which they then use (usually immediately) to first stabilise and then treat patients. Player mats usually have two patients on them at all times (there are situations where the back-up gurney is empty, albeit briefly) and as soon as a patient is treated, they must be immediately transported and replaced by a new patient.

At the end of the game, each treated patient is scored and the penalty for any dead patients (which is anyone who was not treated or transported immediately to hospital via the expensive helicopter transport) is deducted from the total. The player with the highest score wins. 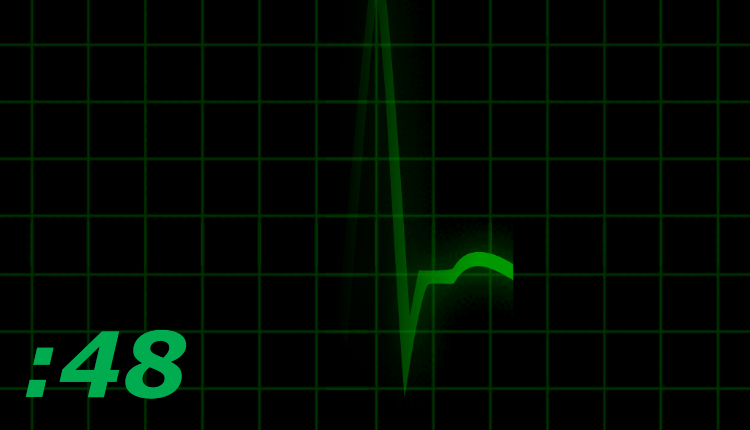 Paramedics: Clear! is a relatively straightforward game with simple components that suit the need for clear, simple visual references to ensure the game is as accessible as possible. There are four player mats, each of which has a unique layout representing the cost of each medical supply in resource cards, as well as a number of common areas for upgrades, gurneys and med cabinets etc.

The boards come accompanied with upgrade tokens for each player as well as a large, shared pool of medical supply tokens which are stacked on each player board above or near their matching resource cost. Below those are the patient gurneys, each of which allows for one card to be placed vertically. The patient deck itself is fairly large and imaginative in terms of the variety of injuries and the slightly comical stick-man artwork depicting each of them.

The instructions are crystal clear and Paramedics: Clear! is relatively simple to play, although because it is real-time and there are a number of rules that involve a bit of refereeing (like having to shout ‘transport’ when sending a patient to hospital), I bet different groups will play it slightly differently. I have seen some people complain about the lack of a timer in the box, but personally I think that the companion app does a fine job, especially because it really enhances the tension (AKA stress) level as a result of the sound effects it includes.

Broadly speaking, all of the components are of a good to high standard, but most importantly, they work perfectly for a game that relies heavily on visual accuracy, speed and dexterity. Components in a game like Paramedics: Clear! could be a problem if they stuck on the board, were too thin to be picked up easily or were hard to identify, but none of those things is a problem here. The companion app is the icing on the cake, really. 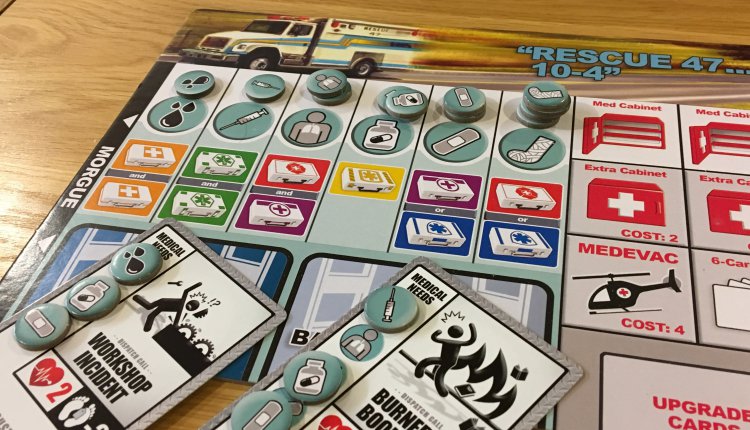 Once you get the hang of it, Paramedics: Clear! is very straightforward to play. There are a couple of phases around the main turns that I’m not going to go into detail about here (such as the cleanup phase, which is where you draw resource cards and sort out your mess of tokens and patients following a completed turn). Instead, I’ll just focus on the main turn. I should also mention that whilst each player acts in real time, turns are done in order, so the aforementioned cleanup should be done whilst other players actually take their turn.

Once the clock starts, you flip any face-down patients or grab a new patient from the face-down deck (to make sure you always have two face-up patients), then begin treatment. Each patient has one to four Medical Needs shown down the left side — all of these must be matched by medical supply tokens in order to treat the patient and transport them to hospital. Medical supplies are paid for by trading in cards from your hand that match the appropriately coloured first-aid kits shown below.

Any patient can be stabilised by meeting just one of their medical needs, at which point you tilt their card slightly to one side. This means the patient will live until the next turn at least, but will still be there when you return on that turn. Critical patients can’t be stabilised, however, and must be treated (which means that all their medical needs must be met) so you need to decide quickly whether you can fully treat critical patients or whether, in fact, you might be better off focussing on stabilising your other patient, upgrading your ambulance or stocking medical supplies in your cabinets.

If at any point you treat a patient, they must be transported off your player card immediately and a new patient drawn. If you treat a patient with two or three seconds to go, you must draw a patient immediately and if you can’t stabilise them (which is unlikely), they will die when your turn ends. Timing when to stabilise and when to treat is a very important strategy in Paramedics: Clear! and you’ll never have enough time or resources to do everything you want to. When the timer sounds, your turn is over — theoretically you should shout ‘clear’ before that happens, which is a rule you may or may not choose to enforce! 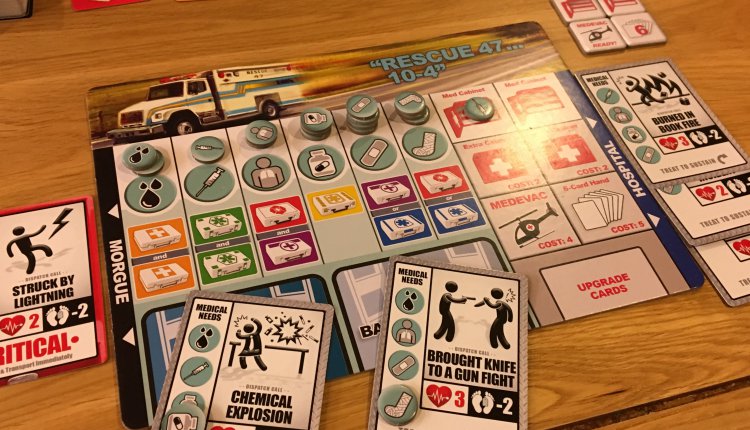 The speed at which players need to work in Paramedics: Clear! means it isn’t for everyone. It is, at best, mildly stressful attempting to make the right decisions whilst saving everyone (which is very, very difficult) and as I said before, you’ll never have the time you need or the resources you want. For some players, this will just be too much — especially if the need to move the pieces physically on and off the gurneys quickly is also a challenge.

For others, though — including myself — the game is made incredibly exciting as a result of the unique approach to real-time play. I often dislike real-time play if it involves factors like simultaneous dice rolling and rerolling, which is hard to police and/or chaotic, but none of those challenges exist in Paramedics: Clear! The game actually plays out like a series of complex, ever-changing, individual puzzles, all of which must be tackled within an ever-decreasing amount of time.

Luck can play a factor, of course, as players who receive more critical patients or a less suitable selection of resource cards will suffer — although it would take incredibly bad luck for that to matter to one player more than the others over the course of a whole game. Even if you did, for example, draw resource cards irrelevant to your patients, you would be wise to use that turn to invest your resources into the powerful ‘extra card’ upgrade or even into a couple of medical supplies for the next turn. That should (to a greater or lesser extent) offset your bad luck when the next patients are drawn. 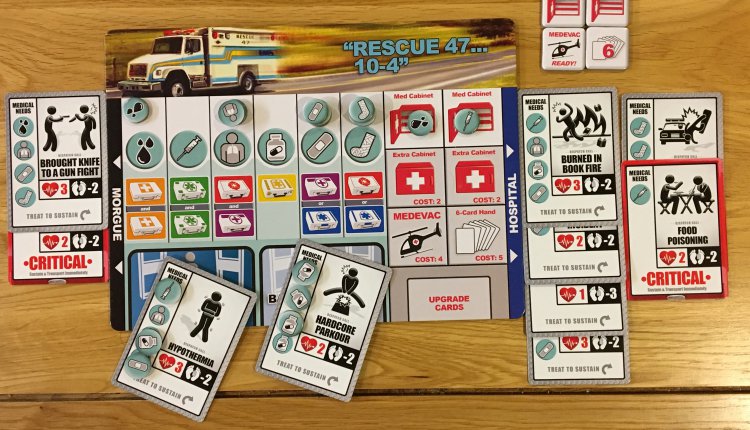 I’ve played Paramedics: Clear! at two- and four-player counts with three different groups of people and I haven’t actually found anyone who didn’t like it yet, which is hugely unusual. It is so unusual, in fact, that I am having to speculate about who might not like it because I haven’t actually received balanced feedback, which I almost always do for other games.

There is a kind of party-game feel to Paramedics: Clear! which might mean people are having so much fun that they don’t realise they are actually playing a ‘proper’ game. One thing I did notice was that it rarely seemed to matter whether a player won or lost — it was always considered a fun game all the same, and there was usually a lot of laughter and excitement at the table as the game unfolded.

Paramedics: Clear! might be an unusual game for Smirk and Dagger, who tend to focus their efforts on player interaction and treachery mechanics, but they have done an excellent job here. Any rough edges that weird or unenforceable rules might create are easily smoothed over as the result of getting the players into an accepted rhythm. As long as everyone is comfortable with the real-time play, there is an absolute tonne of fun to be had here.

A copy of Paramedics: Clear! was provided for review purposes. You can find out more information about the game on the website of publisher Smirk and Dagger.