It’s time to bring an under-represented faction to life in Goblins of Elderstone, a city-building strategy game where you decide on the ultimate path for your tribe of goblins, from shaping morals and actions to playing politics with the gods themselves. Having been greenlit on Steam during development by Lost Goblin, Goblins is now available in Steam Early Access.

In fact, it was doing the rounds on social media before then — we first caught wind of it during its Kickstarter period at the dawn of 2017. With its charming low-poly graphics and cutesy goblin tribespeople, it’s easy recognisable — and the promise of a good city builder is always too good to pass up. So we were excited when we got the chance to try it out for the first time. 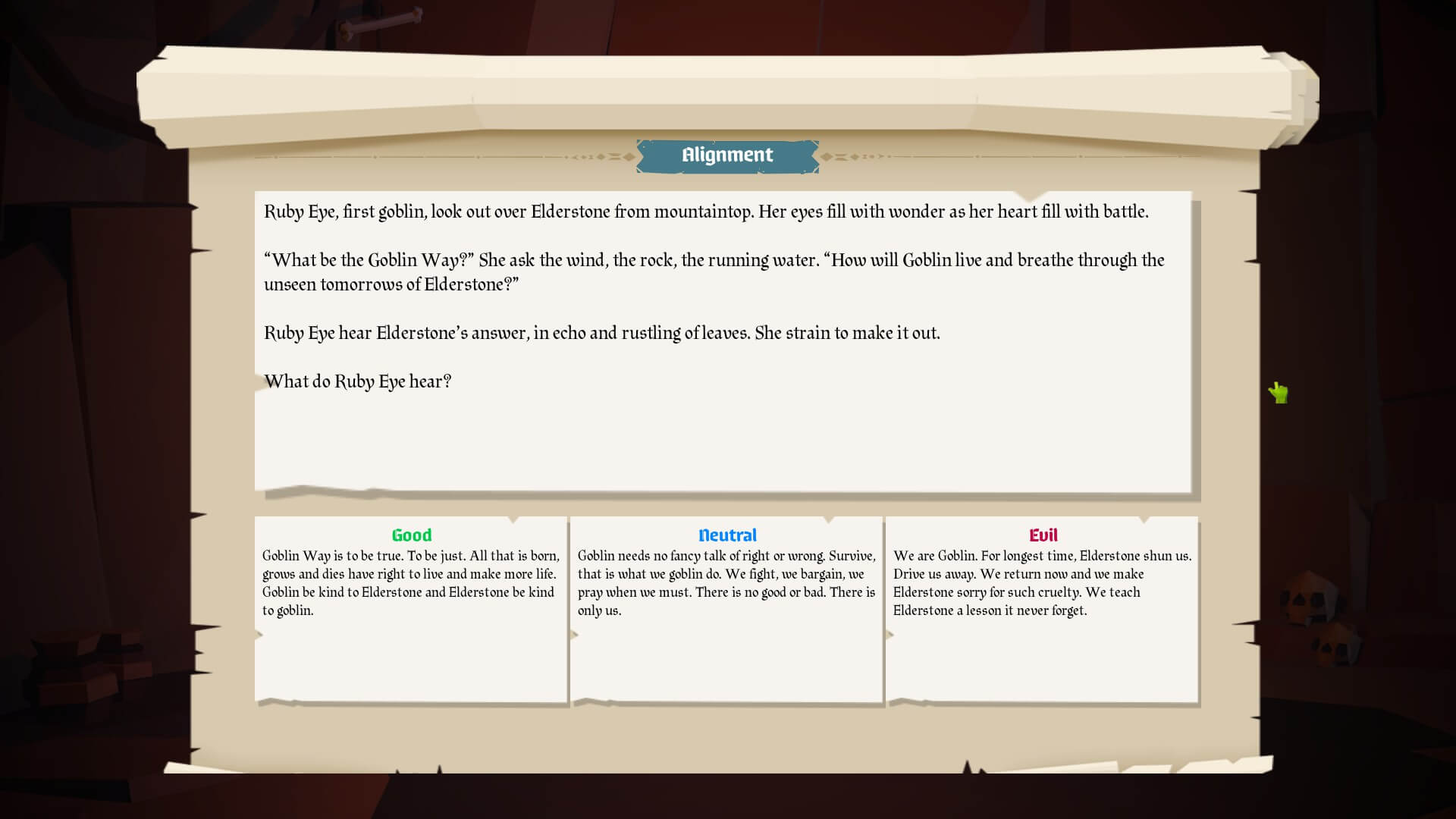 Straight away, we found ourselves deciding the goblins’ pantheon, steering them along the theological spectrum from good to evil, stating a divine preference for trade, nature or war. We even chose their racial enemy, though the choice meant nothing to us at the time.

Then it was time to put the people — or the goblins — in the parish. We carefully selected a spot on the map with a good level of resources and low threat, then chose the tribe’s chief and seven followers. And so our first tribe Hebenebbah, led by Bungis Hebenebbah, was born.

The basics of building 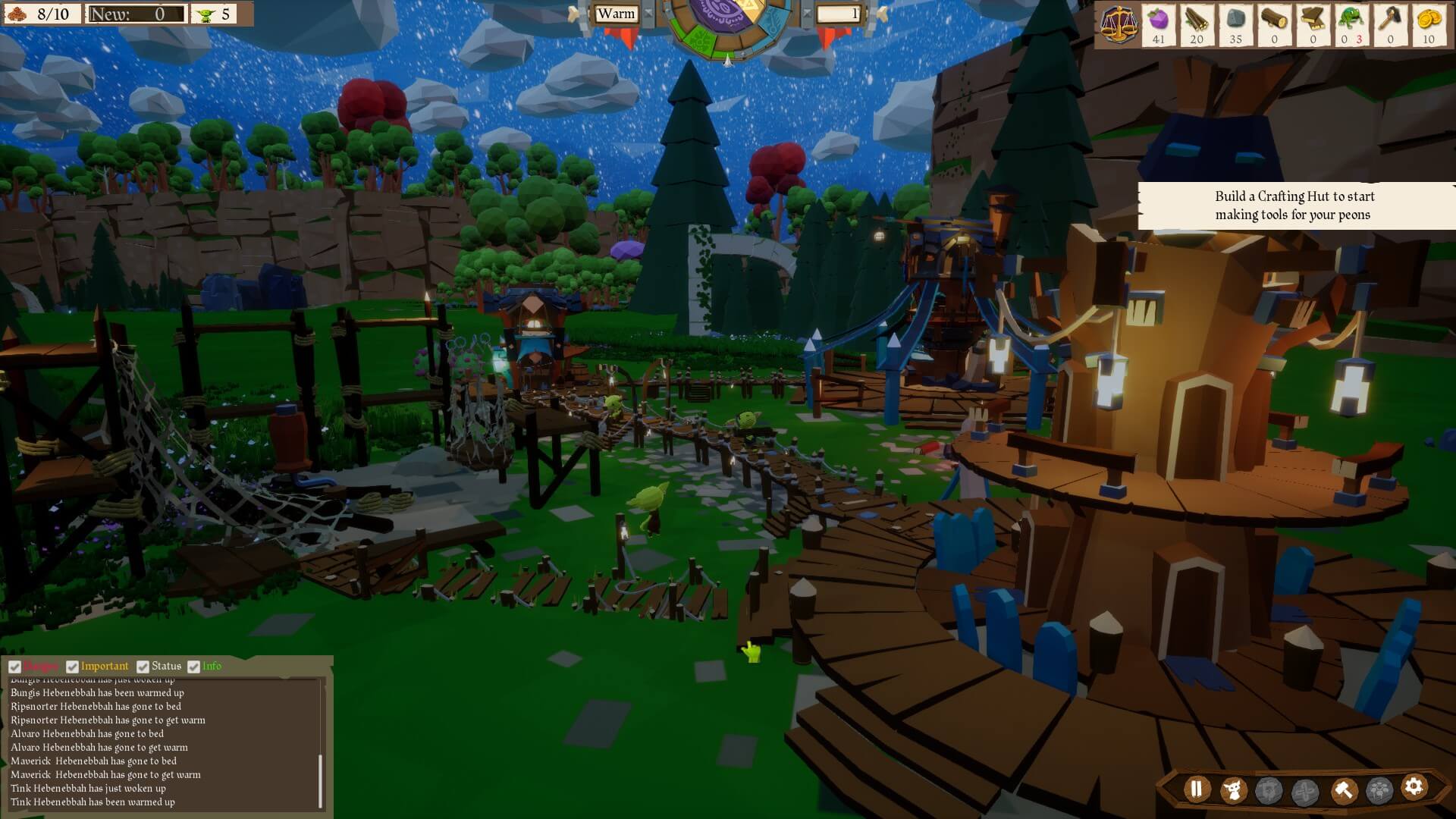 Now, the tutorial does take you through the first basic steps of village creation and it’s worth paying attention to get the hang of things for your first attempt, but it’s extremely unlikely that you’ll survive by following it word for word, in the game’s current version. You soon discover that winter enforces vastly different priorities to the tutorial’s steps.

In any case, laying out your village is immensely satisfying on its own. True to the ramshackle nature of goblin society, you can place buildings anywhere you want. Little wooden walkways automatically bridge the gap between adjacent buildings, making a collection of little huts feel like home in no time.

Placing a building doesn’t build it instantly — just as in Rimworld and Banished, the goblins must deliver resources to a scaffold skeleton first, then construct it, before it’s complete. This means you have to either have the resources to hand or keep goblins hauling and gathering.

Of course, that means understanding how goblins work. The best parallel to draw here is to Banished, whereby all goblins not assigned a specific role default to general labourers. They gather basic resources (berries, sticks and stones), deliver resources to buildings and construct them, so they’re always handy to have around. 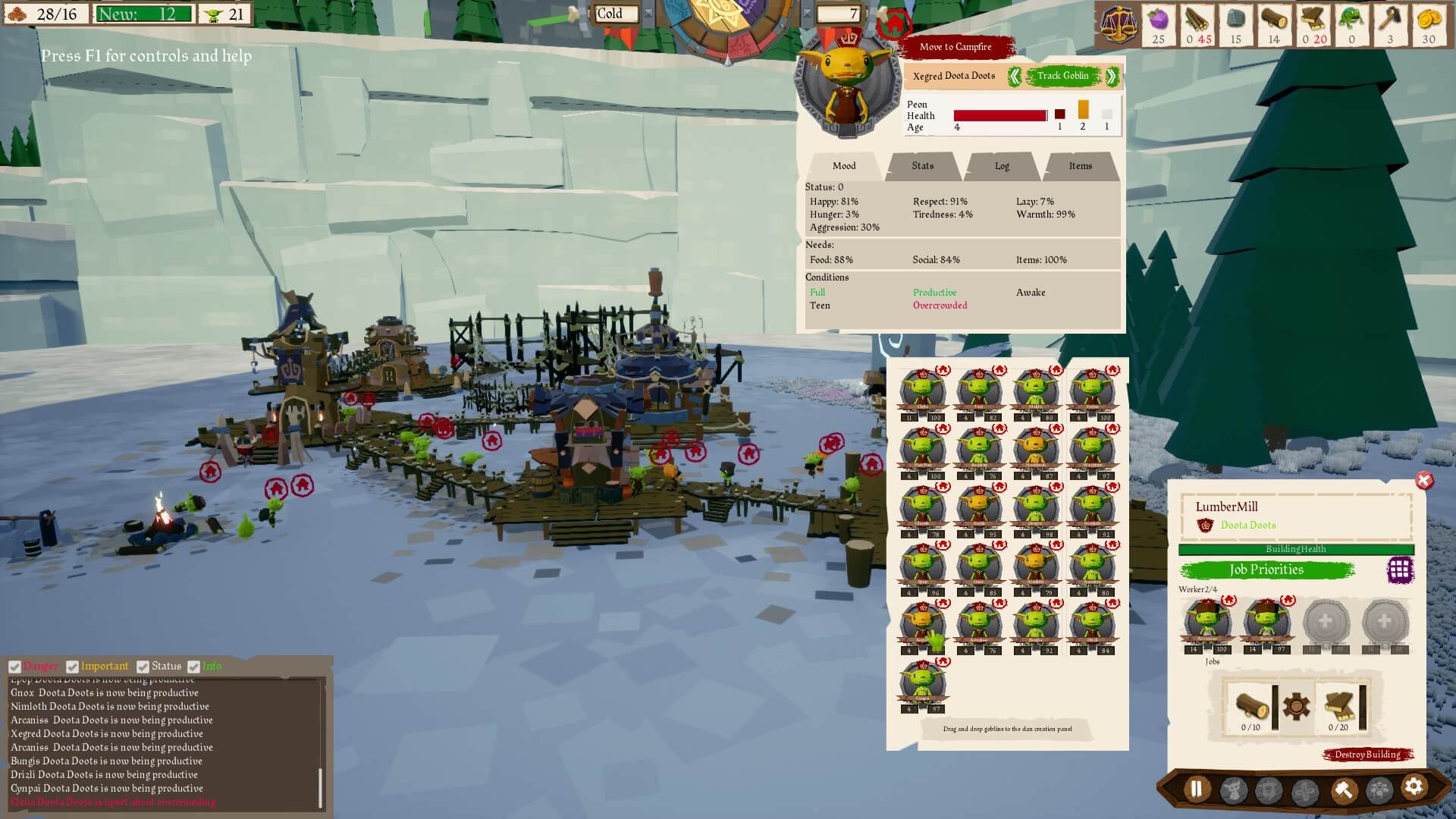 But general labourers don’t always get the job done. Most buildings require a workforce to man them, so you have to assign a goblin or two before they start to serve their intended purpose. Assign too many and you’ll have no labourers. Assign too few and nothing will progress. In the early game, you need to micromanage this as much as possible to make sure there are no idle (or unnecessary) goblins.

Where buildings produce a range of resources, you can aid management by prioritising one over the others or even cancelling production for a resource entirely. You can even prioritise the actions of individual goblins, ticking the resources they should gather or the activities they should do. As this often requires a separate building with a designated worker, though, this may be best avoided until after the first winter.

Sticks and stones may break your bones, but they won’t build everything. Many buildings, such as the woodcutter’s hut and the crafting hall, turn these or other natural resources into complex materials like logs and tools. These in turn are vital for constructing more complicated buildings.

The slog for survival 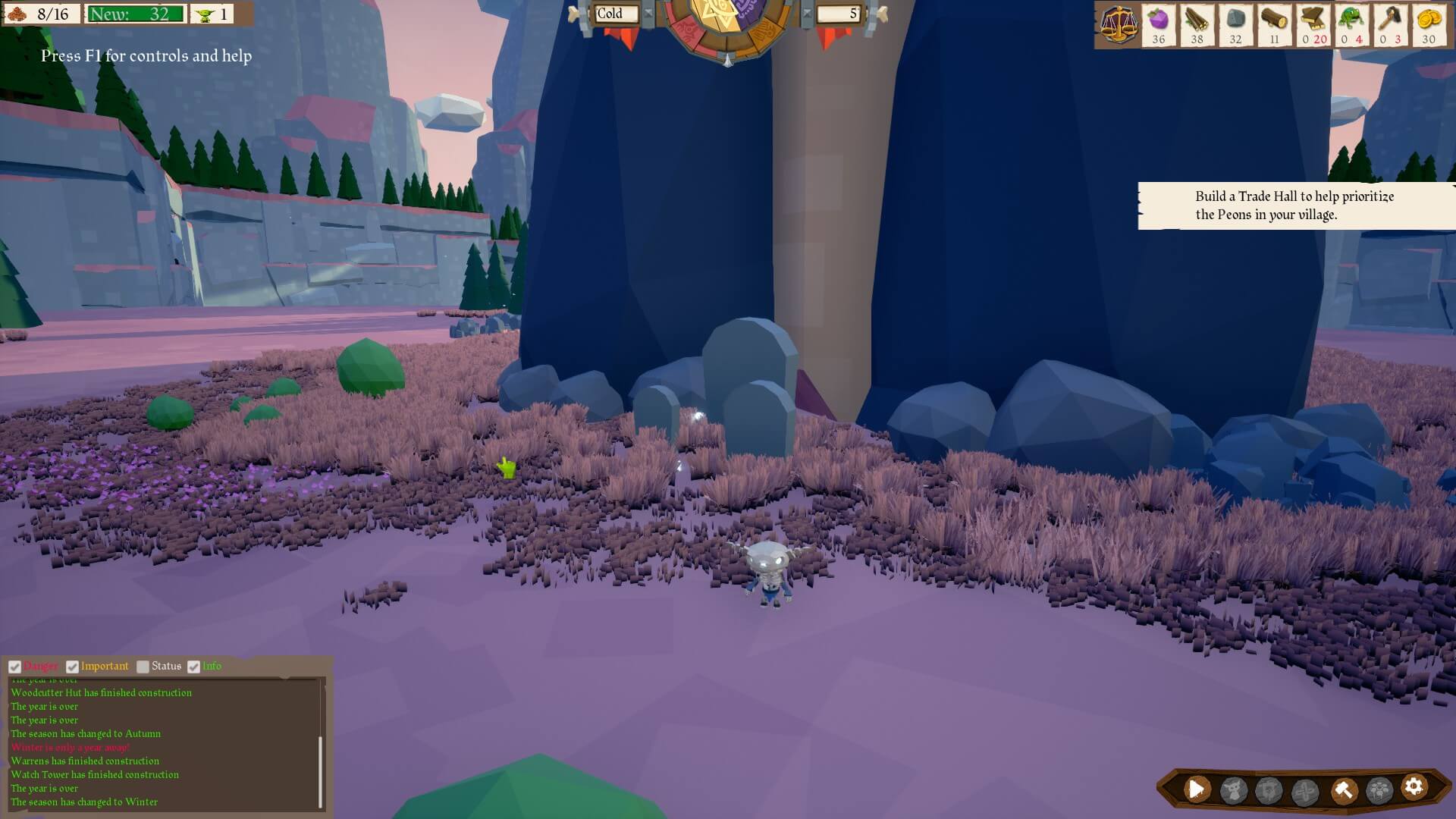 And then the winter comes. At first it seems fairly innocuous — merely a delicate white veneer over the landscape your goblins call home. But winter is when the dead rise, crawling from graveyards across the map before running at alarming speed to attack your tribespeople.

If you haven’t built a watchtower before this point, you’re going to have problems. Goblins prefer to run away than fight back, and while your chief has enough health to kill off a couple before they die, assigning two watch goblins for winter’s length is essential.

Winter, of course, has fangs of its own, with cold able to finish off your goblins the same as any pile of bones. They can go indoors or sit next to the campfire to get warm again, but some might not make it.

This need for warmth in the face of the dark months is, perhaps, the reason why winter is such a glutton for fires. Unfortunately in this version of the game, fires are far too difficult to put out — even with a well and twenty idle goblins, you may only see two trying to put it out at a time, by which time the fire has spread to two other buildings — but such balancing issues don’t often last long when thrown against the trials of early access. 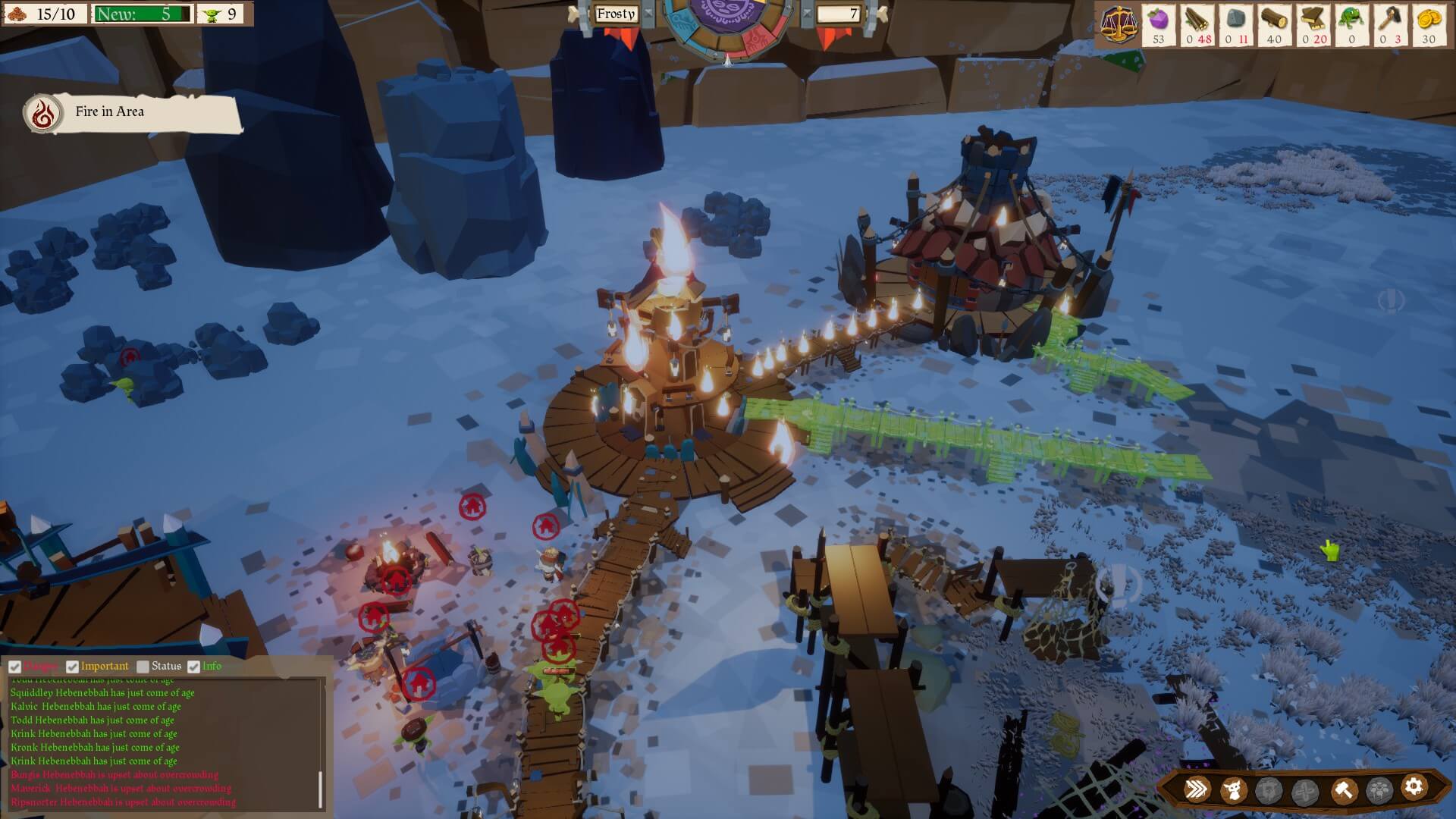 Not only that, but winter is rife with disease, which gradually saps away at your goblins’ health and spreads among them until they all lie dead. Only priests can cure disease, but the problem here is how difficult it is to get them.

The building needed to assign priests takes three types of resource to build: planks, stones and tools. By the time you get round to building it, stones and tools are simple enough, but planks must be made from logs at a lumber mill, which gets its supply of logs from the woodcutter’s hut. This chain of resources, combined with the time and resources it takes to create all three buildings, means it is incredibly difficult to get it built before the first winter — or even during it.

In my first attempt, where I stuck to the tutorial’s advice, I lost Hebbenebbah to a fire. The subsequent tribe of Banoopa fell to disease.

I tried four more times and got so close. Everything was going so well — I’d almost put all the resources into my priest’s hall, I had enough workers for all my jobs and I’d just about manage with the level of food (not that I’d seen a goblin starve yet). And then the grand hall caught fire. Again. And then the game crashed.

A tantalising promise of excellence, obscured by a veil of difficulty 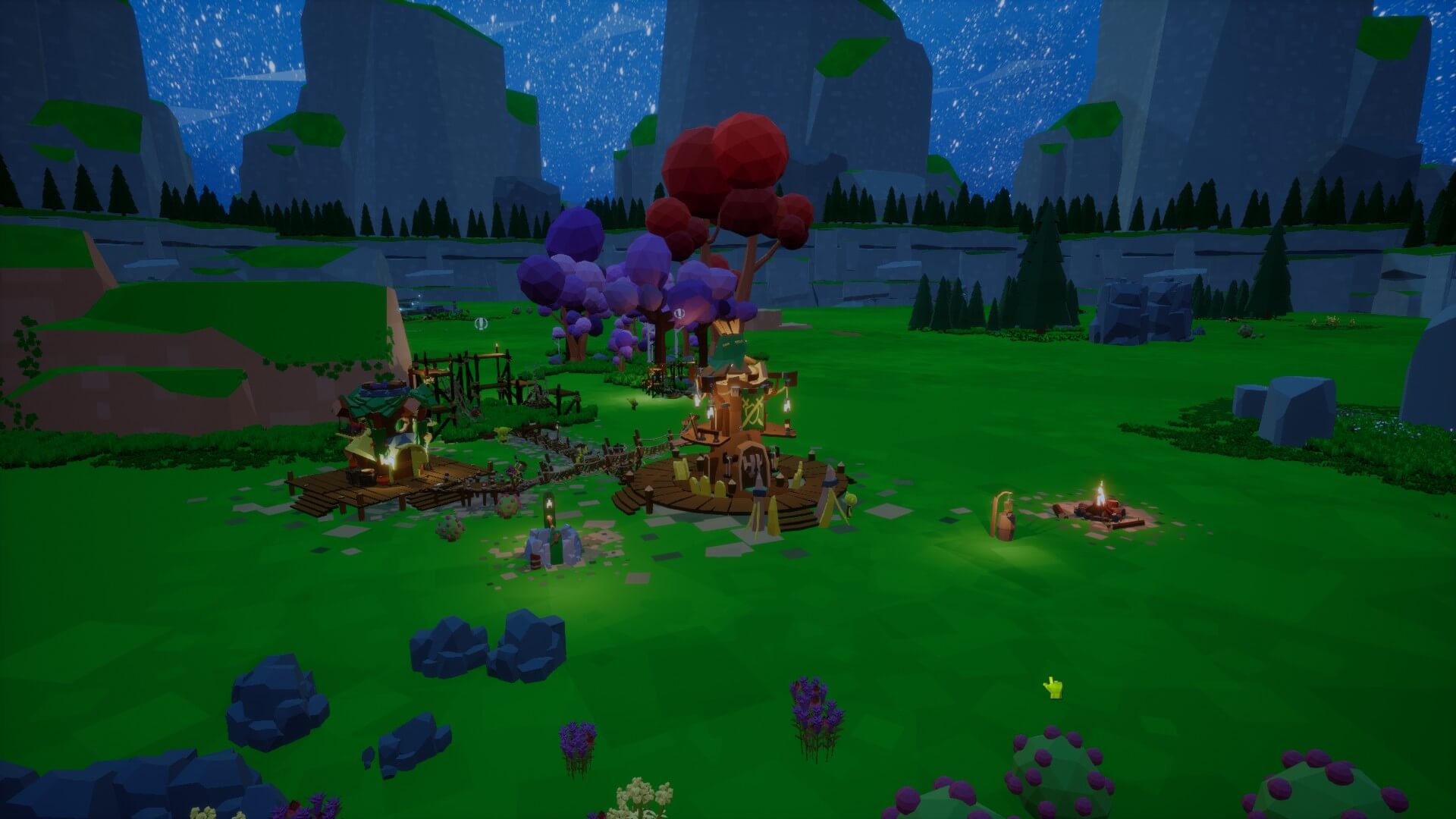 Well, the positive side to this story is that the developers listen to the community and are actively working on the bug list, so hopefully problems like this will be done and dusted by the time release rolls around.

In any case, the main reason why issues like this are annoying is because the game hints at so much fun. I wanted to get through that winter, I really did. I wanted to try out all the other buildings, all the other facets of gameplay. I wanted to know what my choice of pantheon meant. Perhaps a subsequent update will make this more of a possibility.

So what else is there? Well, if we look at the spiel on Goblins’ Steam page, politics, war, trade, religion, world exploration and story are all either on the horizon or somewhere beyond the winter. You can meet special characters over the years as well — the one time we encountered this was when we met a witch. She asked for berries but we had none to give, so she took some away out of spite.

Or she would have, but fortunately for my hungry goblins, she had a bit of a Gandhi complex and negative berries translated into a bountiful harvest. Hey, I’m not complaining.

Goblins of Elderstone may be a bit rough around the edges for those looking for a game to jump straight into, but it’s an excellent choice of early access title to support. Behind that first winter, there’s a solid experience to uncover — a whole world of goblinoid fun.