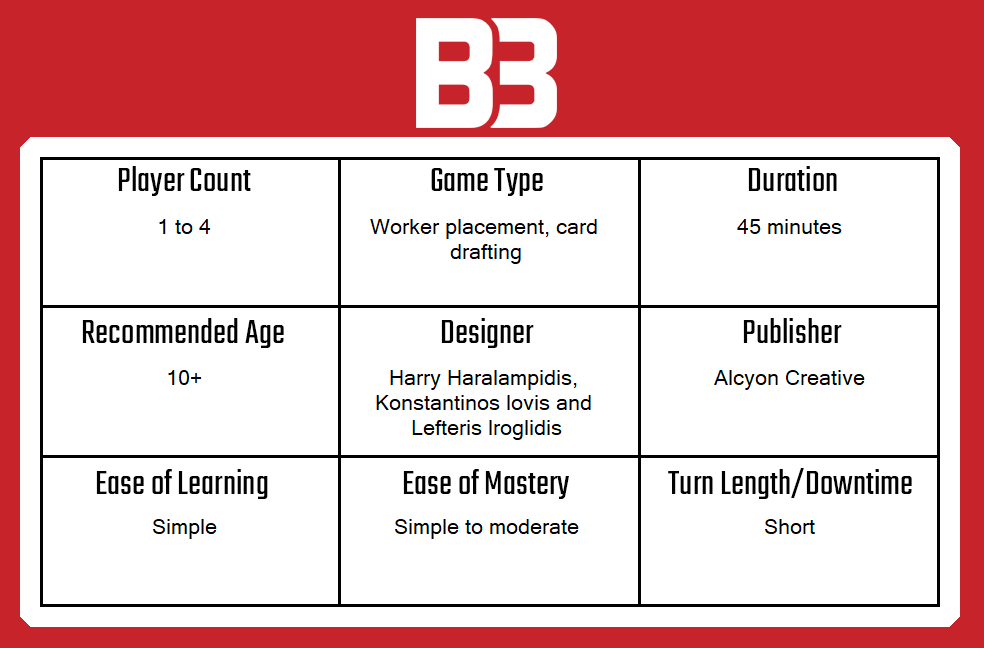 The ancient Greek world was ruled by the Olympian gods: twelve beings of immense power, but also victims to their own feelings, passions and vices. They vied for supremacy among themselves, sometimes through brute force, but also by conspiring against each other through guile and intricate machinations.

Deus Ex Machina is the game the gods were playing when they tried to consolidate their power by manipulating mortals to do their bidding — either showering them with promises of immortality and other divine gifts or bending them to their will with dreadful threats and curses. The gods competed against each other in a contest of wits and tactics, having the heroes of ancient Greece face mythical creatures and threats to gain glory in their name. 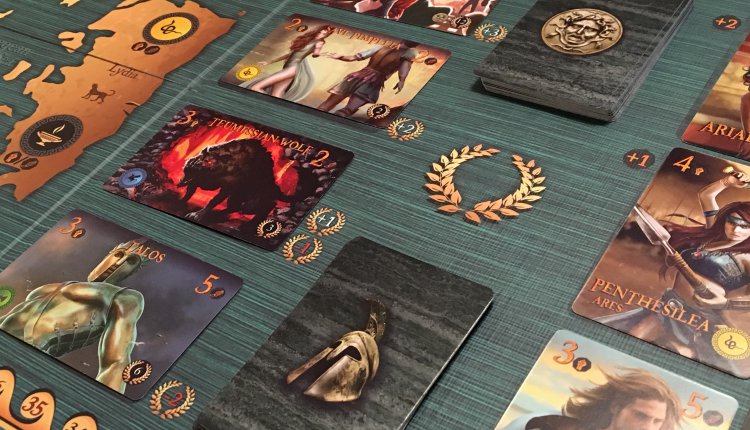 In Deus Ex Machina, each player takes control of a deity from ancient Greek mythology. There are six to choose from (four in the base game plus two from a bundled mini-expansion) and each brings their own favoured hero. The options include Hera, Athena, Zeus and Hermes, as well as Ares and Poseidon. Each of these gods has their own unique player card to track their might and cunning levels and a special ability token that flips from a light side to a dark side when used.

Despite a slightly convoluted initial setup, Deus Ex Machina is a fast-flowing and fairly straightforward game. During setup, the favoured hero for each god is shuffled into a larger deck, which is then placed on the board. A deck of quests is then shuffled and placed beside it. From these decks, three heroes and four quests are drawn and laid face up on the board. The aim of the game is to complete a number of secret objectives dealt to each player, which simply means taking a hero, choosing a quest from an open location and placing your token on that location to lock it down.

On that note, each quest (and each hero) is linked to a specific location on the left half of the board. Quests can only be tackled in their designated location, but heroes can act anywhere — although they will receive a bonus for fighting on home turf. As the gods take turns to draft heroes and use their might and cunning to complete quests, the hero board will be replenished, but the available quests will not. This, combined with the reducing number of available spaces, means that eventually you’ll be sending heroes to locations to increase the strength or cunning of your own god, or to draw Divine Intervention cards, rather than complete quests.

Once each god has acted either two or three times (depending on player count), tokens are retrieved and the quests replenished. There are a few other minor rules — for example, heroes in certain slots on the track receive different bonuses to might or cunning, whilst completing quests in different slots might add bonus victory points or even reduce those of your opponent. One key thing to consider is that players are each dealt two secret quests at the beginning of the game, which must be placed into an empty slot on the quest track and immediately resolved — they cannot be completed directly from your hand. 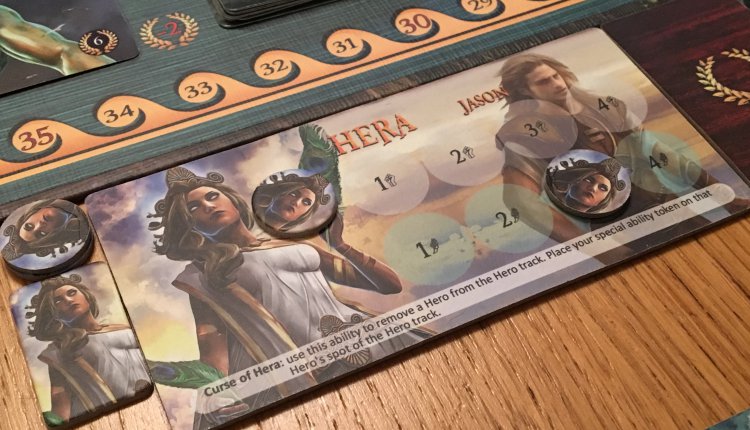 Deus Ex Machina is a small-box game that offers excellent value for money given the quality of the components. Undoubtedly, the most impressive feature is the artwork that adorns the quest and hero cards. Anyone who read about Theseus and the Minotaur in school will instantly recognise the bull-headed antagonist, whilst Jason’s Golden Fleece (and the Hydra that protected it), Medusa and Cerberus, the three-headed dog, are all present and brought to life in rich detail.

The heroes are plentiful and diverse, with many you’ve probably heard of mixed in with several you won’t have. In any case, all of them are well drawn with lots of personality and I was pleased to see a nice selection of female heroes (and goddesses, for that matter) who are, for the most part, free of boob armour. Cards of both types are clearly laid out, so once you understand the might and cunning system that enables heroes to complete quests, you’ll certainly recognise the iconography at a glance.

The board is on the small side and not overly exciting to look at, but at the same time there’s a nice richness to the colour scheme and an embossed, linen feel that is tactile and pleasant to the touch. Player cards and tokens are well printed and set on fairly thick card which has a smooth, matte finish. I suspect other publishers would have been tempted to include meeples or miniatures for the workers to add another dimension, but using tokens keeps the costs low and takes nothing away from the functionality of the game. 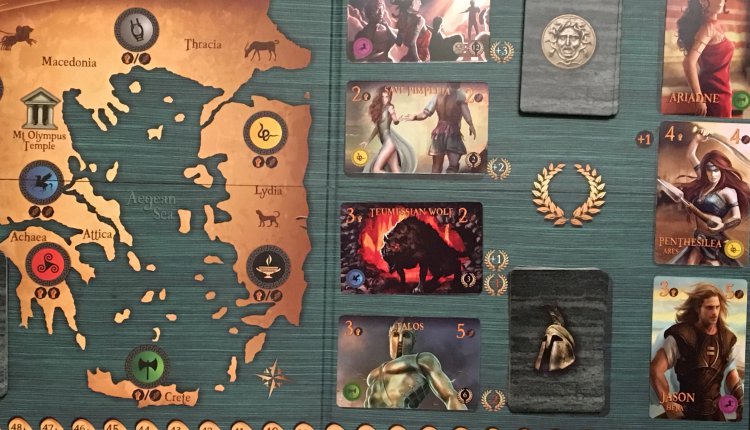 Whilst initially daunting (possibly because play moves from right to left, which feels weird) Deus Ex Machina is very simple. The active god assesses the available heroes and quests, then looks at their own might and cunning. If it is possible for them to take a hero and use their might and cunning to defeat a quest, and the location of that quest is open on the board, then they might choose to do so. That said, it is relatively uncommon for heroes to be able to complete a quest without any assistance at all, simply because one or both stats will be less than required to complete the quest.

It’s easiest to use an example to explain this, so here we go. Let’s pretend that a player wants to use Penthesilla to defeat Talos, who requires three might and five cunning to defeat, but Penthesilla has four might and four cunning, so she lacks one cunning. Assuming that the green location (Crete) is open and the quest can therefore be taken, the player would need to boost Penthesilla’s cunning by one. She can do this by simply reducing her own cunning by one to boost Penthesilla’s or, as pictured above, she could add one cunning directly to her simply because she is in the plus-one slot of the hero track.

There are lots of other possible variants here, although they all flow together fairly organically. For example, a Divine Intervention card might also boost a hero (or a god, who in turn then boosts the hero) whilst of course, heroes receive a bonus for being in their home location. Because each god has their favoured hero shuffled into the hero deck, he or she may be used to complete a quest by another god — if this happens, the god whose favoured hero has been used will also receive two victory points.

As I mentioned before, because the reducing number of available quests will likely lead to a position where only tougher quests remain, players will eventually either complete quests in their hand or need to use heroes to complete more menial tasks. Every location on the board can be visited to gain might, cunning or both instead of to complete a quest, whilst there are also temple and altar spaces that allow Divine Intervention cards to be drawn and special ability tokens to be reset. Once everyone has acted twice (or three times in a two-player game) the round is over and the board is reset.

Play continues like this until one player has achieved all of the objectives on their secret card and completed their two secret quests. Usually, the secret objective card will have a victory point minimum and will then demand a number of quests be completed in various locations — sometimes, cards demand that a legendary quest be completed. It is possible for objectives to stack more favourably for one player than the others — for example if their secret quests match their secret objectives — but usually the victory-point minimum is high enough that everyone needs to complete five to seven quests as a minimum. 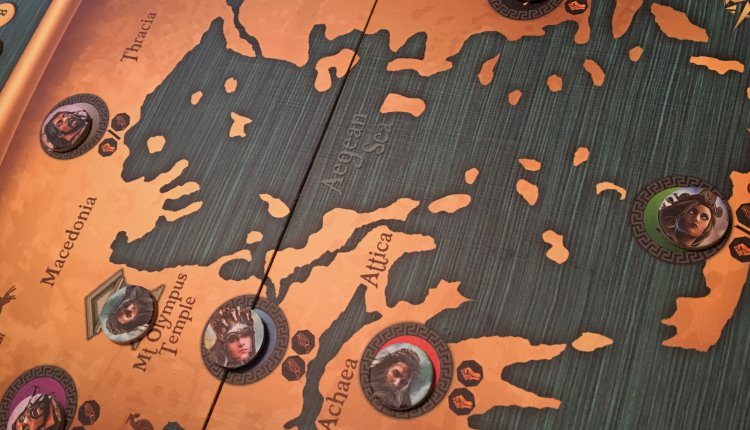 Deus Ex Machina plays very quickly once underway and a game can be done and dusted in thirty minutes or so, depending on how things go. At its longest, it probably won’t ever reach an hour, so combined with the small box and impressive visual appeal, this is actually a superb game to travel with or take on trips to see friends and family. I have a week on holiday coming up soon and I am forever looking for new and interesting ways to entertain everyone; Deus Ex Machina will be on the shortlist for sure.

Whilst the slightly daunting feel that I keep mentioning is probably the cumulative result of a large number of smallish rules and things to consider, they are all related to the same thing (how can I complete quests and how much might/cunning do I need?) so they all remain close to the forefront of the mind when playing. It might seem like there are many ways to achieve a particular outcome — because there are — but that’s not a bad thing when you realise how quickly the simple quests vanish. Being the one person who can work out how to use a particular hero to complete a particular quest can be very satisfying.

I mentioned before that some combinations of cards can favour one player or another and that can lead to some negative feelings, although the randomness is universal. It might be entirely possible for a player to draw the best possible combination of objective and quest cards, only to then suffer from never seeing the right heroes to complete them, or to be locked out (unknowingly) by other players choosing the locations of their secret quests before them. As a result — and certainly over the course of several games — any unfair advantages will be ironed out. 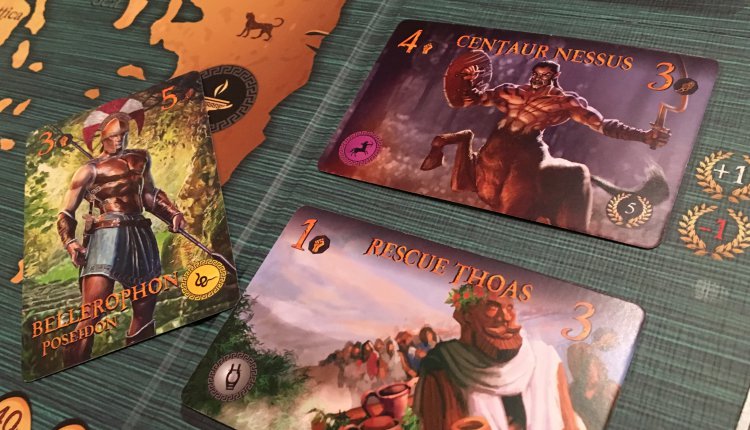 Deus Ex Machina has a fantastic theme, beautifully realised through exceptional artwork and great components, as well as the functional mechanics of the game. It is straightforward enough to play with just a short warm-up game and yet deep enough to command a high level of replay value. The fact that it comes bundled in a relatively small box makes it a very attractive prospect for travel or convention play.