Having been a fan of the Warhammer IP for many years, any chance I get to try out something set in the grim, dark future of the 41st millennium, I take it. So when I first heard about Necromunda: Underhive Wars, I naturally jumped at the opportunity to play this newest addition to the IP’s game library.

I’d really like to tell you that it was a constantly awesome experience, with tonnes of great moments tucked into the game’s plot and gameplay. But more of my time playing this turn-based tactical RPG was spent dealing with numerous rage-inducing bugs, crashes, and periods of boredom that made Necromunda: Underhive Wars easily one of the hardest games I’ve had to review.

Before I delve into the issues I had, let’s talk about what the game does well, starting with it’s setting.

Taking place on a giant planet-sized city known as a hive world, Necromunda is filled with gang wars, polluted wastelands, and towering metal factories with most of its people never seeing the sun and in a constant struggle for survival in the harsh world they live in; so pretty on-brand for 40K. But as bleak as it may sound, the game does a great job of bringing this world to live, with maps being surprisingly detailed despite the limited colour of greys and metals on most of them, and somehow feeling both expansive and claustrophobic at the same time. In that regard, developers Rogue Factor have done a great job of translating the world from tabletop to screen.

In terms of gameplay, It isn’t the most innovative in the genre. You’ll have to manage the placement of your unit on the map, think tactically (duh) about how to approach objectives and all that rigmarole that comes with tactical games like X-COM or Corruption 2029. So in that regard, it’s not breaking new ground. 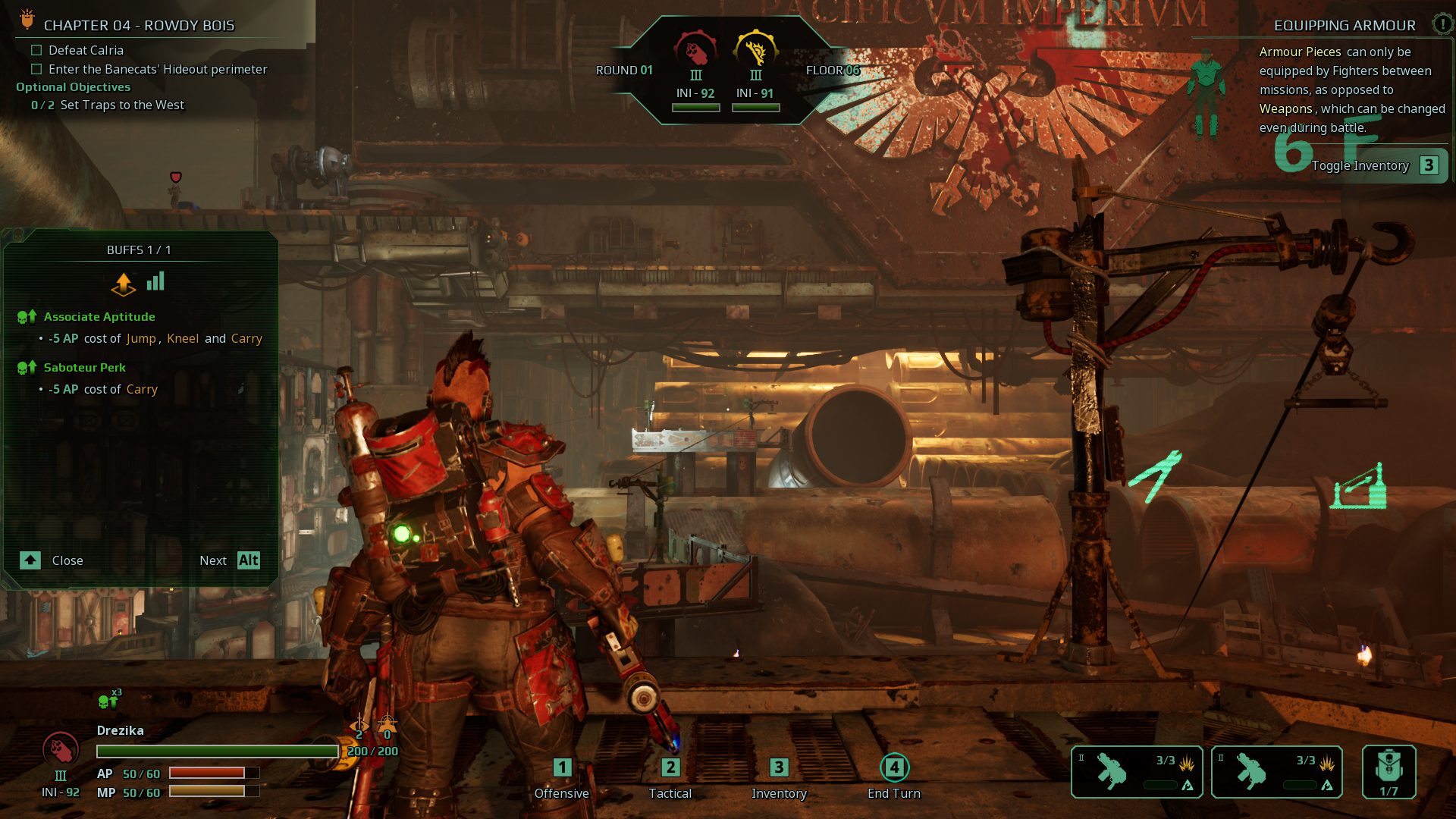 As you’d expect you’ll have a host of different units, each having their own set of abilities to buff gang members and debuff enemies, and weapons that deal different kinds of damage; Like the heavy unit, who carries hulking turret-like weapons and uses auras to aid nearby allies. But what really stood out was the freedom of choice. Each of these units can be utilized in a multitude of different ways. Do you use your leader to buff your other units or go in guns blazing, or have your saboteur cut off enemies from escaping combat? This coupled with the amount of vertically in the game made thinking tactically a bit more rewarding than some other games I’ve played in the genre. There are a lot of menus, numbers, and percentages to deal with as you might expect, but if you can deal with that and the very slow pace of the game, you should find it more than enjoyable enough.

Let’s just get this out the way: I love customization. Anytime I get to make a character, personalize them, or make my own choices, I’m all over it. So making my own gang was easily a highlight of my time with Necromunda: Underhive Wars. Everything from cosmetics to unit abilities and stats, setting up my own squad to take on the missions was a joy as I unlocked new weapons and items to equip them with and tailored each unit to make my squad how I wanted to play; Plus, with a seemingly endless loop of gameplay, as you fight for control over sectors against randomly generated gangs, to further upgrade your gang in an ever-escalating conflict, I could easily see myself getting invested into this aspect of the game. Though don’t expect to be playing online with anyone, as I sat in a lobby waiting for nearly 15 minutes with no sign of another player. Whether that’s because players aren’t playing multiplayer or the game’s issue I don’t know, but it was a let down to not get a chance to face off against another player’s gang, and instead settling for random AI. 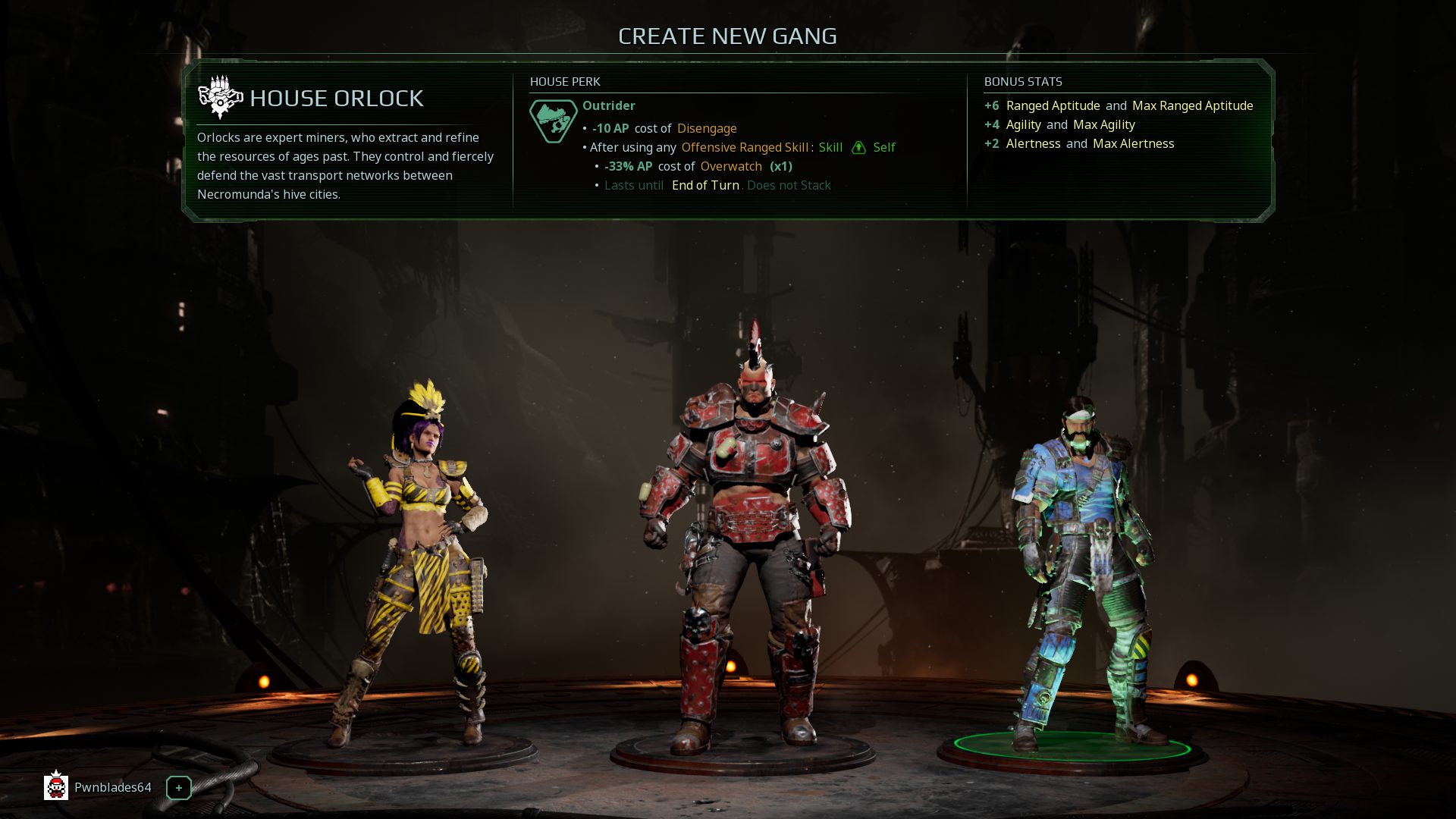 But the same can’t be said for the story.

I had hoped for a new gritty Warhammer story that explored the lore of the world, the underhive, and its gangs. Instead, it felt more like an extremely long and tedious tutorial that did more to annoy me than educate me on the mechanics of the game.

The plot basically amounts to three rival gangs making a mad dash towards a piece of technology called archeotech, all while each fighting their way through even more gangs, and that’s about it. Not once did I truly care about what was happening or why, and frankly given the fact it’s a Warhammer game that made it feel like a waste of the license. Cutscenes and dialogue often just moved the plot along with little attempt to make any of the characters you play and meet engaging or interesting; Frankly, I’m surprised I kept going as long as I did given how uneventful it was, especially as the great customization and features in other parts of the game aren’t present in the campaign, making it an even more of a drag to get through.

I’m not saying I expected the most detailed or engaging narrative, but even so, it feels like a really wasted opportunity to do something unique with the IP that could have made this a truly engaging story like other games set in the Warhammer universe have done before. But as disappointing as the story mode is, it was nothing compared to some of the issues I encountered. 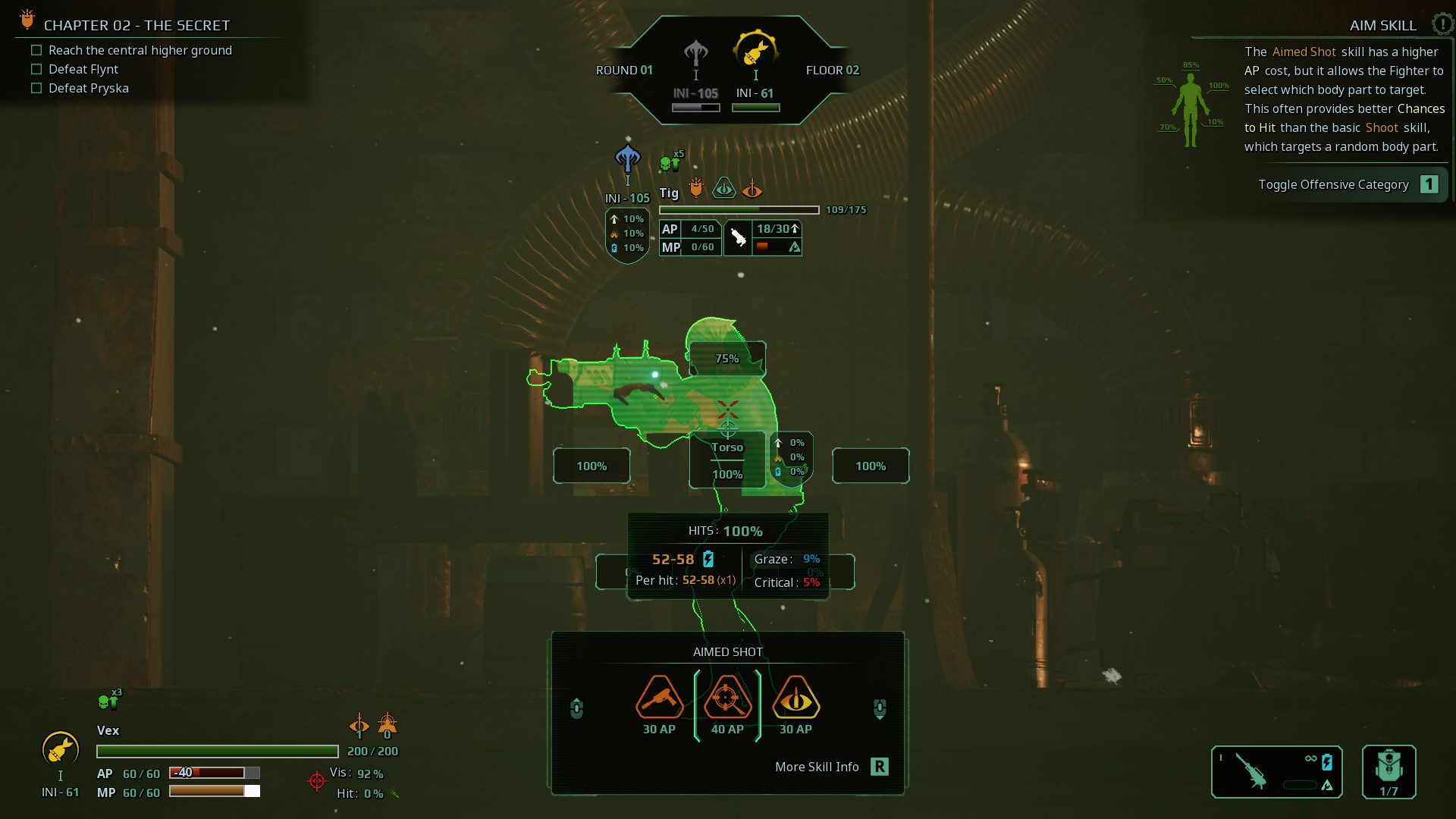 Every time I started to enjoy myself I was completely ripped out of it by bugs and glitches that honestly diminished my whole opinion of the game. I had multiple hard crashes where my game would close for no reason, constant issues with certain abilities not working or just freezing the game completely, and missions being unable to finish thanks to my units not being able to pick up objectives. One particularly maddening example was during a campaign mission that I had to restart four times due to issues with objectives not triggering or letting me even acquire the item I needed. Sounds rough? Well, now I can tell you about the AI.

Put simply, the AI had multiple moments of downright ineptitude, walking up to walls and crouching for cover completely out the way of any danger, or getting stuck on objects that made me have to quit the level or be stuck watching an enemy charge into barrels forever. That’s some of the bigger issues, but I had a whole host of other little bugs and glitches that added up quickly.

With so many technical issues that hinder the entire experience, as well as some more lacklustre moments of gameplay, I can’t find a lot of reasons to try to persuade you to buy this game in its current state. Maybe with some patches to fix these issues, it could turn into a great tactical RPG, but that can only take it so far.

If you’re a huge fan of the IP then maybe you’ll get more enjoyment out of it, but for me, it too often pulled me out of the game and diminished its gameplay with technical issues; eventually to the point that I was relieved to be finished playing it, not eager to return and play more.

Necromunda: Underhive Wars is available now on PC, Xbox One, and PS4. For more information, check out the game’s Website or Twitter.

Necromunda: Hired Gun — A Flawed Experience, but at Least You Have a Dog