I’ve been following Impact Winter closely since it rocketed through Greenlight back in 2015, the post-societal, snow-coated world, and combination of adventure and survival mechanics is a surefire winning combination.

At the recent EGX Rezzed expo at London’s Tobacco Docks, I met up with several members of the team behind the game and asked them a few questions regarding the game’s journey, world, and the changes the game had undergone since its inception. 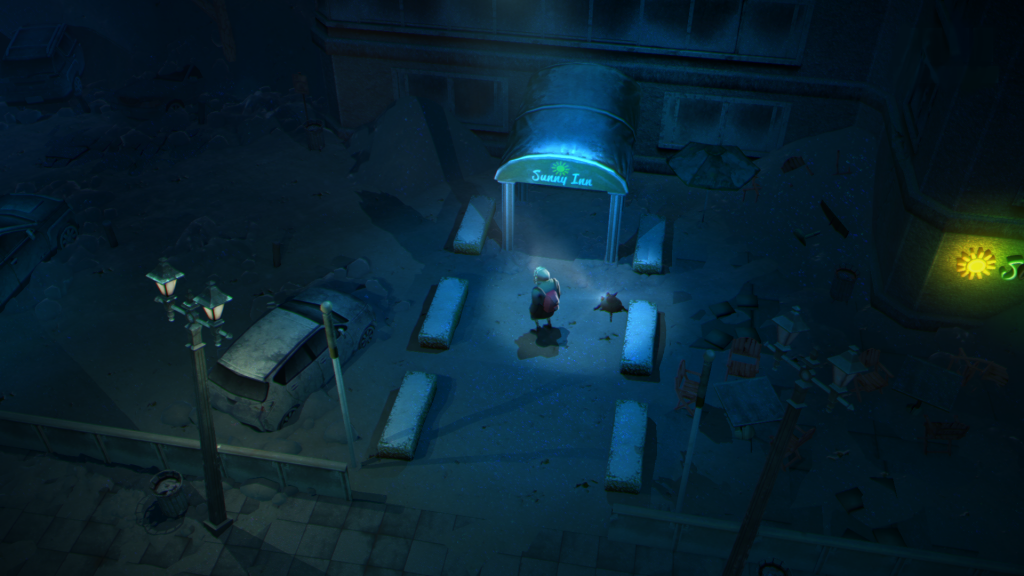 Sometimes when games fail to meet their Kickstarter target they just completely disappear to never be seen again, sometimes a stripped down version will launch a year or so later, sometimes they’ll be picked up by a publisher. For developer Mojo Bones, it was a much more interesting journey.

Their Kickstarter for Impact Winter – a near identical pitch than what has gone on to be the final game, albeit with a video showing off 2D-rendering – failed to meet it’s respectable £95k goal, with less than 30% of the target met by the time the project ran to end. That was November 2014. In February of 2015 when they headed to Steam Greenlight with the same pitch, but with a new trailer, one showing the game assembled and running in 3D, in Unity, the reaction was completely different. The project passed through the platform in three days, at the time a pace almost completely unheard of.

Stuart Ryall, the game designer, told me that while they were overjoyed at the impressive speed they passed through Greenlight, in doing so they missed out on a collateral benefit of the system; exposure to press and potential audience.

Indeed, once the game had been Greenlit, and as such removed from the recommendation circuit on Valve’s platform, interactions with the game ground to nigh static before the end of the month. Bandai Namco, however, had spotted the game’s rapid passage, and began movements towards acquiring the IP. Something that would be announced in late 2016, and forming a solid 2017 publishing year for Bandai Namco which also included Little Nightmares, Project Cars 2, and Get Even.

While the word that is most regularly attached to the project is survival, Ryall explained that they prefer to see it represented as an Adventure Survival title; chosen so to stress the fact that exploration is key to cranking down the the game’s timer, and topping the leaderboards for escape time. 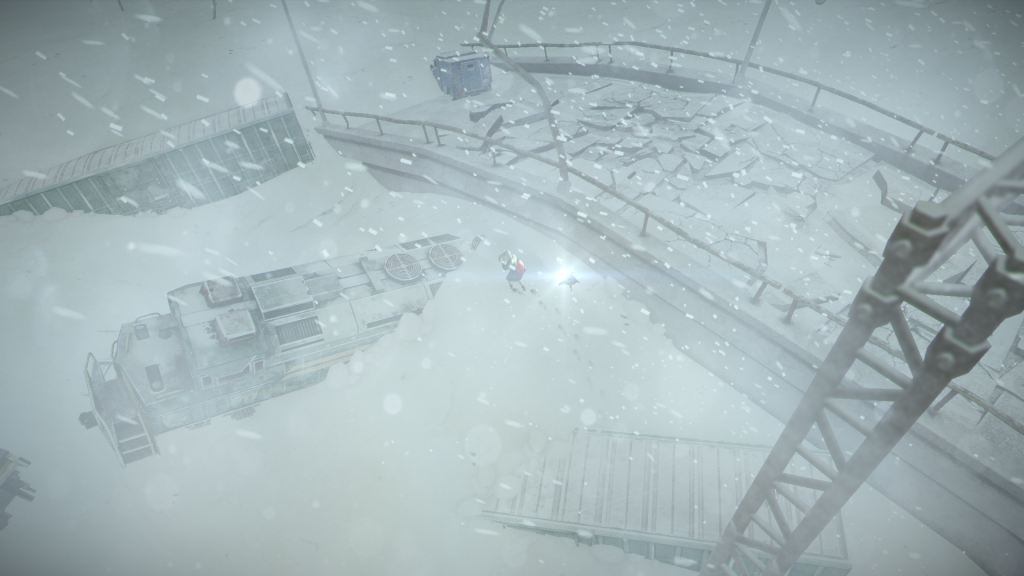 The game, for those not aware, takes place in a post-societal North America, with an asteroid impact triggering a new ice age which has left the world we know 40ft under a new ice & snow sheet. It’s a year since the asteroid hit, and you -as Jake Solomon- have found yourself as the head of a resourceful group of survivors, holed up in a church with a search party thirty days from your destination.

The concept, as the team explained, came from an idea of having a group of efficient, skilled, non-player characters working alongside the player, yet not directly controlled by them. Indeed, as you play the game the characters use you as much as you use them. Completing missions and requests for them helps you in kind, as each of them specialises in a survival related skill-set; Wendy in well-being and survival, Blane in hunting, defence and survival, Maggie in engineering, manufacture, and survival, and Christophe in upgrades for your sidekick Ako-Light (say acolyte) and, well, bringing down the timer so you don’t need to worry about survival so much.

Originally each of the character’s story-lines were independent of one another, with the player’s choice leading them down an increasingly specialised play-style. This would essentially mean that the game featured four storylines for players to follow, each one exploring a different angle on the same journey.

However, after a lot of play testing the decision was made to open up all four of the arcs for simultaneous play. The decision came at some point in early 2017, and -understandably- required a lot of tweaking, finessing, and balancing as the characters would now be able to build a wider skill-set, building defences, climbing cliffs, blasting through doors, upgrading Ako-Light, and crafting more effecting foods. Needing to balance the player’s journey anew is surely a tall order, and this is -almost certainly- the reason behind the slight delay the game’s launch has suffered.

What is most interesting, to me, about this major shift is that it’s actually increased the meta-game of speed-runs and replayability. It has also created, in giving the player choice, a greater chance for players to build an agenda that will lead to their death through mismanagement, and that -in my opinion- is important in stressing the real survival element of the game. 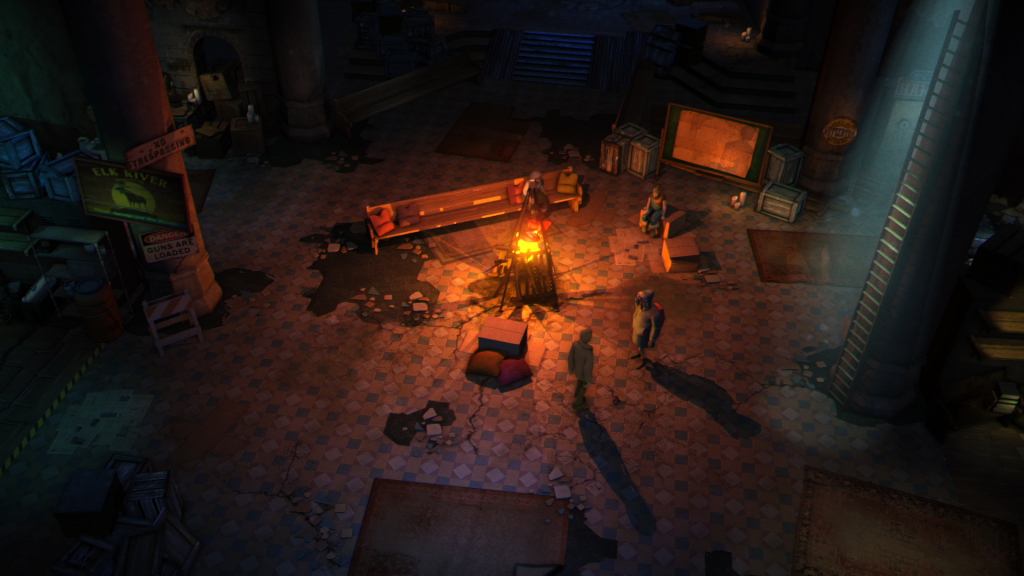 Impact Winter is a game about keeping your fellow survivors safe, fit, warm, watered, and fed, that they can do the same to you. Fail to do that and they’ll die, and your job will become a whole lot harder. That’s always been a part of the game as it turns out, as Mark Norman, the studio’s artist explained to me. Even back before the idea of a post-asteroid setting had fully come into play, in those earliest stages the survivors were still based within a church, with the same Mitch Murder led soundtrack, and the same dangers and volatile world.

The soundtrack, to back up a little bit, was one of the first things that stood out to me. As Soloman first emerges from the church into the deadly, bitter outside world, synth notes drop, and then hang in the frosty wastes. My mind immediately races back to John Carpenter’s The Thing, and while there’s certainly no shapeshifting, starkiller monsters in the game, it certainly captures the tense, deadliness of the storm that closes in on MacReady and other survivors at U.S Outpost #31 as the film moves towards it’s peak.

Of the fifty-or-so minutes that I’ve played of the game over various events this year, I’ve come to theorise that the main theme of the game is moderation. The temptation to head out into the snow-coated wilderness and snatch up as many valuables for yourself as possible is immense, even with the game ensuring you are taught the ins and outs of the base-section before you even see the surface. Ambling off towards the horizon to track down a weapon, or find something elusive, is somewhat in vain; if you do this, as I eluded earlier, then you risk a high chance of the event system rolling fowl of your fellow survivors back at base, and your starting supplies stash being too shallow to keep them going in your absence. 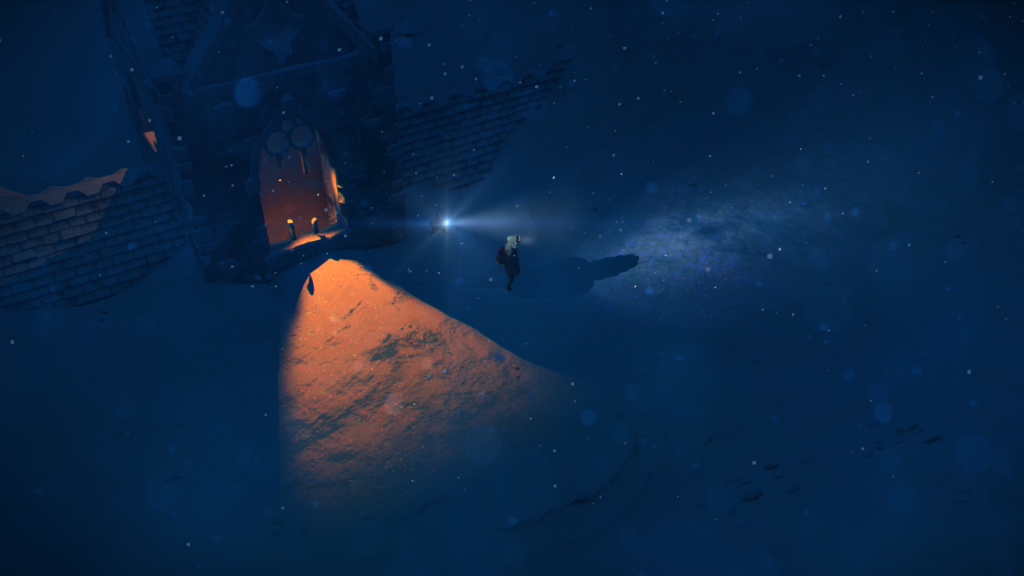 There’s something else that insists you hold your horses. The inventory system. While the church storage area can hold more than you can imagine, your character only has a certain inventory space at the beginning of the game, and, better still, the space is relative. One of the first points I mentioned to the developers was that I really enjoyed the inventory system, that it channelled System Shock, Deus Ex, Arcanum, in that you must physically slot the item into the inventory to make them fit; massive items, like guns, and breeze-blocks, used large amounts of the inventory up, while the equivalent in smaller items could be of vastly greater value.

It turns out, as the designer corrected me, that their main influence had been the earlier Resident Evil games, which had employed a similar method.

It’s a massively underused system, and one that makes you really question the value of the items you are collecting; Do you take the shotgun in case you run into the bear again? Do you take the medicine for Blane’s injury? Do you take the food, knowing that you might only make it part-way back without the energy you’ll get from it en route? And, of course, what do you do with the rest of your inventory space? Everything has a use, be it in being combined to upgrade one of your church improvements, or be it simply as fuel for the fire to keep the church inhabitable.

With about 20 hours worth of content in the parks, shops, and streets buried beneath the snow, as well as persistent unlocks, and a deluge of choices from the widened story-structure, there’s a great need for restraint if you want to not only survive, but survive well.

As we wrapped up our chat about the game the conversation shifted to the IP, and working with a publisher. Refreshingly they were happy to confirm that they considered themselves deeply invested in the setting, and had enjoyed the close relationship with Bandai Namco; and that, fate permitting, they’d love to work on something else in the same, intriguing setting.

Impact Winter launches on Steam on the 23rd of May this year, it’s also planned to release on Xbox One & PS4 this year, but on an -as of yet- undefined date.