Way back in 2015, Jotun hit Steam shelves and was widely regarded as a pretty fantastic game. Last year, Jotun made its way onto our home consoles, and with the developers currently working on their next project, Sundered, it’s nice to go back to Jotun and have a look why the game was so popular in the first place with a good old fashioned review.

You play as Thora, a recently deceased Viking warrior who must defeat the five Jotun to impress the Gods and gain entry to Valhalla, 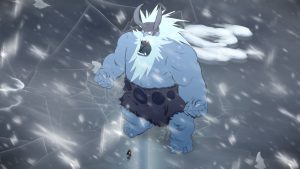 as she did not die a warrior’s death. There is so much lore and story to Jotun that it really does boggle the mind. Anyone interested in Viking mythology should definitely have a look at what Jotun has to offer.

In the game, you’ll have a variety of different powers to pick up which will accompany your standard light and heavy attacks. Powers that can be obtained include a healing power which is essential in later periods of the game as well as a speed power for increased mobility and hit rate, and a shield power which blocks all damage for a very limited amount of time. These powers also have limited uses until you heal at one of the game’s many shrines.

Jotun is very simplistically set out and it’s rather refreshing to see. Complexity can kill a game like Jotun and its simplicity mixed with its complex lore makes the game work.

There are five areas, each with three sections. In the first two sections the player will have to navigate the level and collect a rune at the end. There will be a myriad of different dangers along the way as well as a number of fun and interesting puzzles to get your brain working. After both runes have been collected, you’ll have to enter the third section for a tough as nails boss fight against one of the Jotun.

Throughout these levels, there will be various different reasons to explore the level around you to make sure you don’t miss anything. Power upgrades can be tucked out of the way, and golden apples are also dotted throughout each mission which, when collected, increases the player’s vitality. Exploration is key to Jotun, and you’re rewarded for poking around the map for a lot longer than necessary.

One of my only issues with the game is that the map is extremely lacking and could have done with being a little bit more helpful. A number of times I didn’t know how to progress and a more detailed map, maybe with a player cursor, could have been a lot more convenient in that situation. It’s also extremely easy to get lost when going off the beaten track to find secrets. 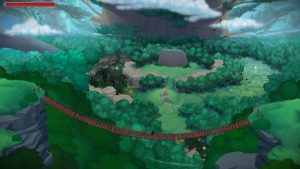 Apart from that, and a pretty infuriating final boss fight, Jotun is a breath of fresh air in an otherwise mundane and lifeless genre. Boss fights can be incredibly tense affairs, and landing that final blow to take down a boss you’ve been struggling with is satisfaction beyond belief, rather similar to Dark Souls boss fights. Each one has their own move sets which need to be carefully analysed, and each attempt brings you ever closer to sweet victory.

One thing that immediately jumps out at you would be the art style. Most things in Jotun are hand drawn, which leads to a very beautiful looking game, the likes of which I’ve never seen. Environments are all incredibly well designed, look gorgeous and I feel like the fact that everything is hand drawn allows the developers to be a bit more creative.

Sections which required the player to fight waves of enemies were fun and challenging, yet these sections weren’t quite the highlight of the game. For me, the puzzle sections were a lot more entertaining and really varied in uniqueness. My favourite was the puzzle in which you have to match the star constellations with the lighting emitting beacons on the ground, all whilst dodging the lightning bolts hurdling towards you.

It was fun, challenging, and really made me sweat.

Accompanied with some fantastic visual scenery is the presence of a brilliant soundtrack to go along with all of your epic battles, along with some top-notch voice acting from Thora’s narration, all voiced in her native tongue. Boss fights are made all the more thrilling when a fast-paced musical score is being played over the top. 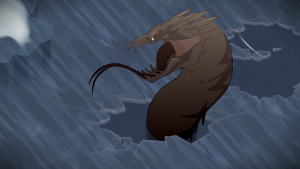 However, the artistry of each environment really must be appreciated and soaked in whenever you play the game. You can just sense the time and effort that has been poured into every single detail of the game whether it be from the intricate and gorgeous level design, to the unique animations of the giant creatures which stumble towards you. You can’t play a game like Jotun and not recognise how much effort it must have taken to get the game looking and feeling as good as it does.

Viking and Norse mythology has been a favourite of mine over the past few years, and it really does shine through when playing this game. The lore of different Gods as well as the players own backstory is intrinsically weaved throughout the game. Each environment is tailored towards a certain aspect of Norse mythology and it’s exciting to see what the next environment will offer.

Overall, Jotun is a fantastically designed piece of entertainment, and one that deserves all the praise that it gets. It’s wonderfully structured levels, terrific environmental designs and thumping soundtrack all perfectly complement each other spectacularly. Whilst each individual aspect of the game would be average at best divided from the rest of the game, all of its components put together create a wonderful story with a backbone of Norse mythology to give it a leg up.