Everything about that time of year is just wonderful, from carving your own jack-o-lantern, all the way down to the annoying children knocking on your door, threatening you for sweets. Streets are filled with joyous laughter as children run around dressed as vampires and werewolves. However one of my favourite traditions of this spooky time of year is to sit down with a few friends and watch the Evil Dead trilogy, a franchise of horror films so painfully cringey and awful, they’re brilliant. Slayaway Camp is a homage to such films like Evil Dead, taking the best aspects of the teen horror genre and putting them into one brilliantly made game. 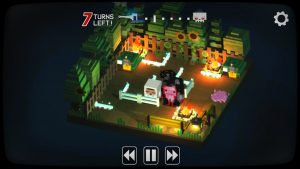 In the game you play as a number of different psychopaths, murderers or maniacs who’s job it is to terrorise the teenagers of Slayaway Camp. This is accomplished through a very simple, but effective, puzzle game where you will slide in the direction you command whether something good is in your way, or utterly horrible. Think of it like those ice puzzles you get in Zelda or Pokemon games. Your victims will also work in this way and there will be many different types of enemy in the game hindering your progress. You’ll encounter policemen, swat teams, and even really bad singers, but the end goal is always the same. Murder all the teens in the area.

As you progress through the game, a number of different obstacles will limit your murdering capabilities meaning that you’ll have to use your brain to get around them, but also use them to your advantage. Whenever you land next to a teen, he/she will run off in the other direction meaning that even your positioning is important for you to be able to murder everyone. Holes in the ground and campfires can be utilised by getting clumsy teens to stumble or fall into them, leading to some pretty horrific, but rewarding, death animations. In fact, sometimes these items will have to be used to even be able to complete the level. Levels get harder as you go on, including more enemies and more deathtraps and towards the end, you’ll have to use all of your brain power to be able to get past some of the most challenging levels in the game.

One can’t really review a game like Slayaway Camp without sounding like some kind of nut-case but this little game has become one of my firm favourites of 2016. A particularly enjoyable feature of mine has to be the menu which is set out like an old video rental store with video tapes being the main way of progressing. After you finish each film you’ll obtain another film to carry on the main game, or you can go back and play the deleted scenes, each of which will give you a silly little story about the making of that particular scene  or why it was ultimately removed from the final film. After you finish all the films, there will even be banned scenes that you can go back and try, each with a small cut-scene.

This is the part of the review where I try to sound mentally stable but fail horribly to do so. As a reward for completing each level, you’ll be given a very small mini-game which basically consists of you pressing a button or clicking your mouse in the correct spot. If you do so, you’ll get a gruesome kill to watch and some skull coins for your trouble. These coins can then be used in the store to unlock different killers to use throughout the game and can also be used to unlock even more death animations for you to watch which include death by bee stings, and a variety of other grizzly deaths. It’s these death animations that make the game fresh and exciting. Nothing is more rewarding than finishing a puzzle that has had you stumped and then being given a brand new death animation you’ve never seen before.

I told you I’d sound deranged

Slayaway Camp gets away with not being totally mortifying due to it’s very cute and blocky art style. Characters consist of blocks with small rectangles for arms meaning that watching someone have their head sawed off isn’t too disgusting. In fact, it’s this art style which truly makes the game, giving it some charm that you don’t see with most games of it’s kind. It’s simple, and nothing can beat a nice simple game to sit down to after a long day’s work. Anybody could have come up with the core mechanics of this game, but it took a stroke of genius to pair it with the cheesy horror film genre we all know and love.

Visually, you can’t fault it. It runs at a smooth frame rate and even though the game consists of blocks, there is an alarming amount of detail poured into every level and setting you come across. Each film has it’s own unique setting, whether it be in the forests of camp, a funfair, or even outer space. Every single level is brimming with an amazing scenery, when one isn’t even required. You can really see the love and effort that has been put into every single pixel. The expressions of each teen is what does it for me. Even though the area around them is dark and dangerous, you’ll catch a teen just sleeping or high as a kite, and when they do spot you, the terror on their face is just priceless. 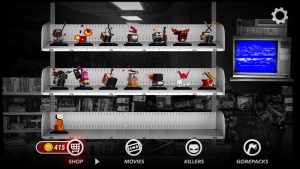 As well as looking great, Slayaway Camp manages to sound great as well with some creepy music to enhance the atmosphere even more, as well as some spine chilling sound effects and voice acting. Every now and again you’ll hear the teenagers scream just before you kill them and for a moment it even makes you feel sorry for them. Slayaway Camp is summed up nicely by the narrator that gives you a brief description of the movie you’re about to play. It’s wacky and silly, but also has a rather scary, disturbing tone. Everything about this game is just stupid, but that’s a great thing. Everyone needs some stupid fun now and again and that’s exactly why I make it my mission to watch the Evil Dead franchise every Halloween.

Anybody wanting some stupid fun, this is where you get it.