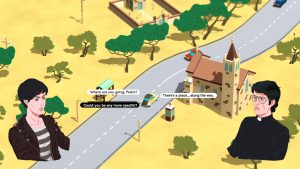 A road trip can be a wonderful thing. The feeling of going on a long journey with unknown consequences can be thrilling and exciting, and the people you bring along the way can either make or break the trip. Wheels of Aurelia would trick you into believing that the game is about driving and the journey itself; but instead it’s much more of a narrative experience, one that lets you decide how things turn out and what the overall end goal is. You play as Lella, a woman with a mysterious past that is slowly uncovered to you, providing you go down the right paths. With you is another young woman called Olga, whom you picked up at a disco.

Wheels of Aurelia is much more than just a simple driving game. It in fact focuses on the character building and how the characters interact with each other, so much so that driving can be an option rather than a necessity. If you felt like it, you could take your hands off the keyboard and just talk to the person sat next to you, whilst the car cruises along the roads by itself. Conversations are shown by still images on screen whilst the car drives and the player has an option of three choices, one of which is complete silence.

As Lella, you can choose whatever her personality may be. You can choose to be stern and serious, or playful and caring. Everything in Wheels of Aurelia has a choice behind it and nothing is done unless the game has your permission. You can skip by hitchhikers or stop and pick them up. You can choose to take on other characters in races, or keep your temper. Everything around you is dictated by the player, whether it be what city the game ends in, what music is on the radio or even how quickly you drive. The kind of person that Lella becomes is all down to you. 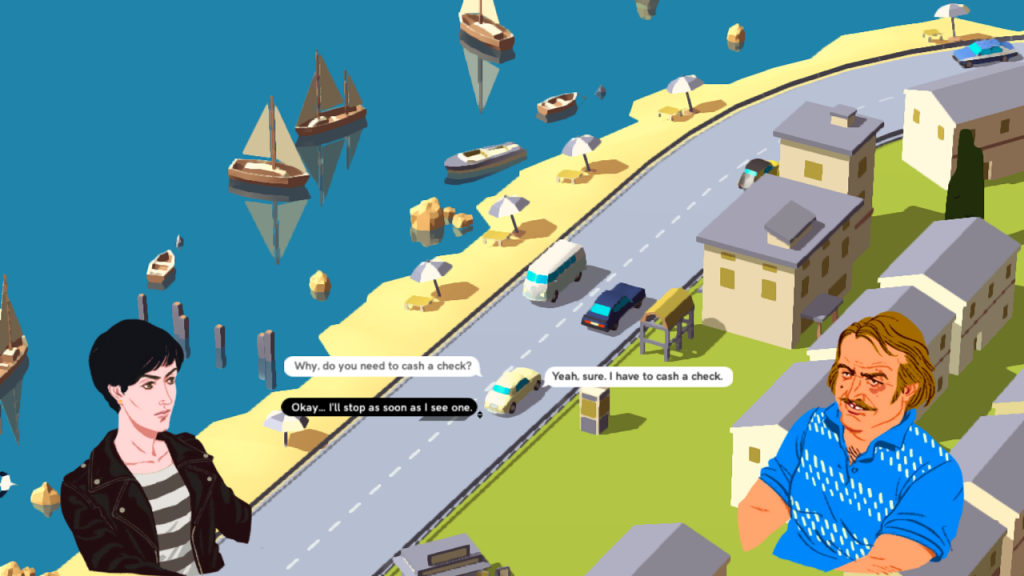 Most of my enjoyment of the game came from taking in the locations you drive by, each chocked with detail, be it little or small. It’s a lovely experience to once or twice just ignore the people sat next to you and chill out, cruising by the seaside, listening to some great music whilst taking in the scenery. Wheels of Aurelia is to be played exactly how you want to play it. No boundaries and no limits, unless of course you want to drive off a cliff, but I’m afraid that’s a no-no.

To play Wheels of Aurelia and fully understand what people are talking about, you must either have a deep knowledge of Italian history in the 1970’s, or have Google to hand. Lots of topics raised in this game extend to real-life, with many events in Italian history being included. As well as leaning heavily on the political side of the world, the game also brings up multiple different topics most game don’t ever venture towards. Abortion, astronomy, religion and kidnapping, as well as political upheaval, are all talked about at length and offer deep insights into the lives of ordinary people.

Wheels of Aurelia is not a difficult game, in fact, you can finish the game without even having to press a button if you so desired, but the narrative and character building is what makes the game and the developers have done a fantastic job to weave multiple different stories and endings into one game all about choice. All you know is that at the beginning of the game, yourself and Olga are trying to make your way towards France, from Italy, for some unknown reason. Reasons become clear shortly, but where the game ends is all up to you.

To name just a few of the sixteen endings you can find in this game, you’ll be able to defuse a bomb, become a rally driver, or even settle down with a child. Curiosity is what drove me to try the game more than one time, and the roughly twenty minute playthrough time is just enough to make starting the game all over again seem worthwhile. I’ll admit, I’ve never seen all the endings, and it can be a difficult task to do so, but I played the game a good six times to try and get a unique ending each time, and succeeded in doing so. To weave sixteen different endings within one another must have taken some doing so applause to the developer for managing to do it so well. 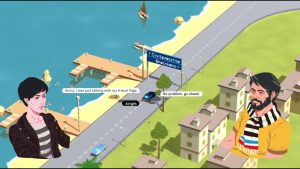 Every road trip needs to have a good set of people and a great sense of wonder and excitement. You never really know what Wheels of Aurelia is going to throw at you next, so much so that at one moment you’re travelling down the road, and the next you’re being chased by the police. One minute you’re driving to a city, the next you’re driving quickly away from said city, because some random guy challenged you to a race. Hitchhikers provide funny stories and characters, especially when you don’t take them to where they want to go!

Wheels of Aurelia is a great game, one of which the likes I’ve never even seen before. A driving game with a narrative focus was always going to be tricky to pull off, but I think that the developers have done a cracking job to create great characters, a gorgeous world, a head bobbing soundtrack and multiple different interesting and intriguing stories all bundled together in one lovely package. If you’re one for your action games, then I can’t recommend it, but if you like your deep, story focused games then I can’t recommend it enough. Go and check it out, you won’t regret it!