What’s Missing is a fun, if slightly unbalanced party game

Even though we cover a wide variety of different games here at Big Boss Battle, I’d say we cover fewer party games than we do other, heavier genres and thematic games. This is likely because my kids are too young for them, and the presence of kids in our house precludes us actually having parties. That said, I have managed to get What’s Missing to the table quite a few times, thanks to its accessibility across a wide range of players.

What’s Missing is essentially a drawing game like Telestrations, each player receives a pen and a flip up pad that features a cardboard “shield” as the front sheet, as well as a clear plastic page onto which the players will draw. The third and final page of each pad is simply a plain white piece of card. 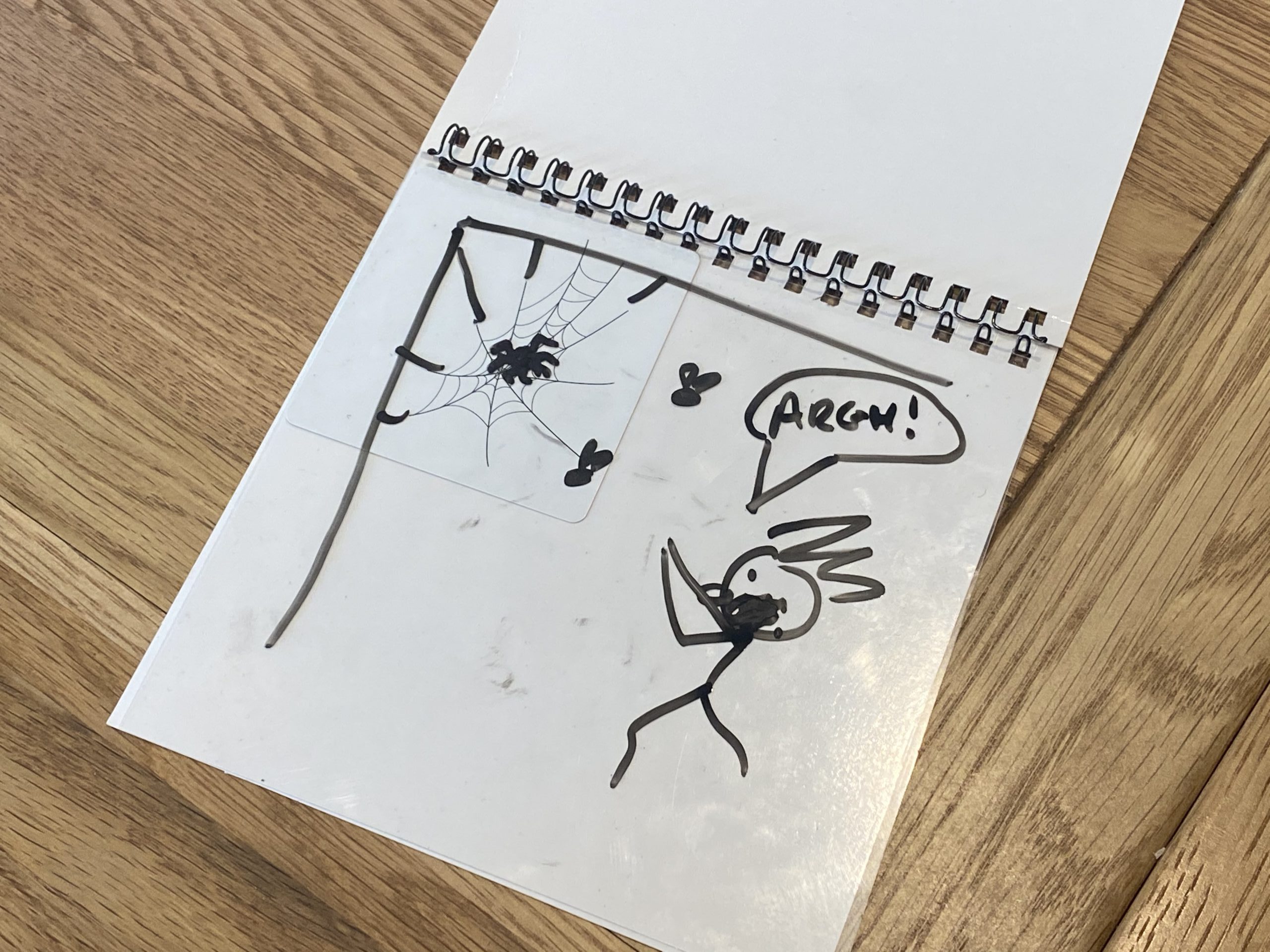 Every round, the players will each draw a single card from one of three decks (easy, medium, hard) and then place it face up (secretly) beneath the clear plastic screen in their flip up pad. There are hundreds of cards in the box ranging from spiderwebs to cakes, and car tyres to shovels.

Using the cardboard sheet of their pad to shield their drawing from the other players, everyone then draws a picture around the card, to make a complete picture. For the birthday cake example, this might mean drawing a table, several children in party hats and even candles – but the image on the card must not be traced. 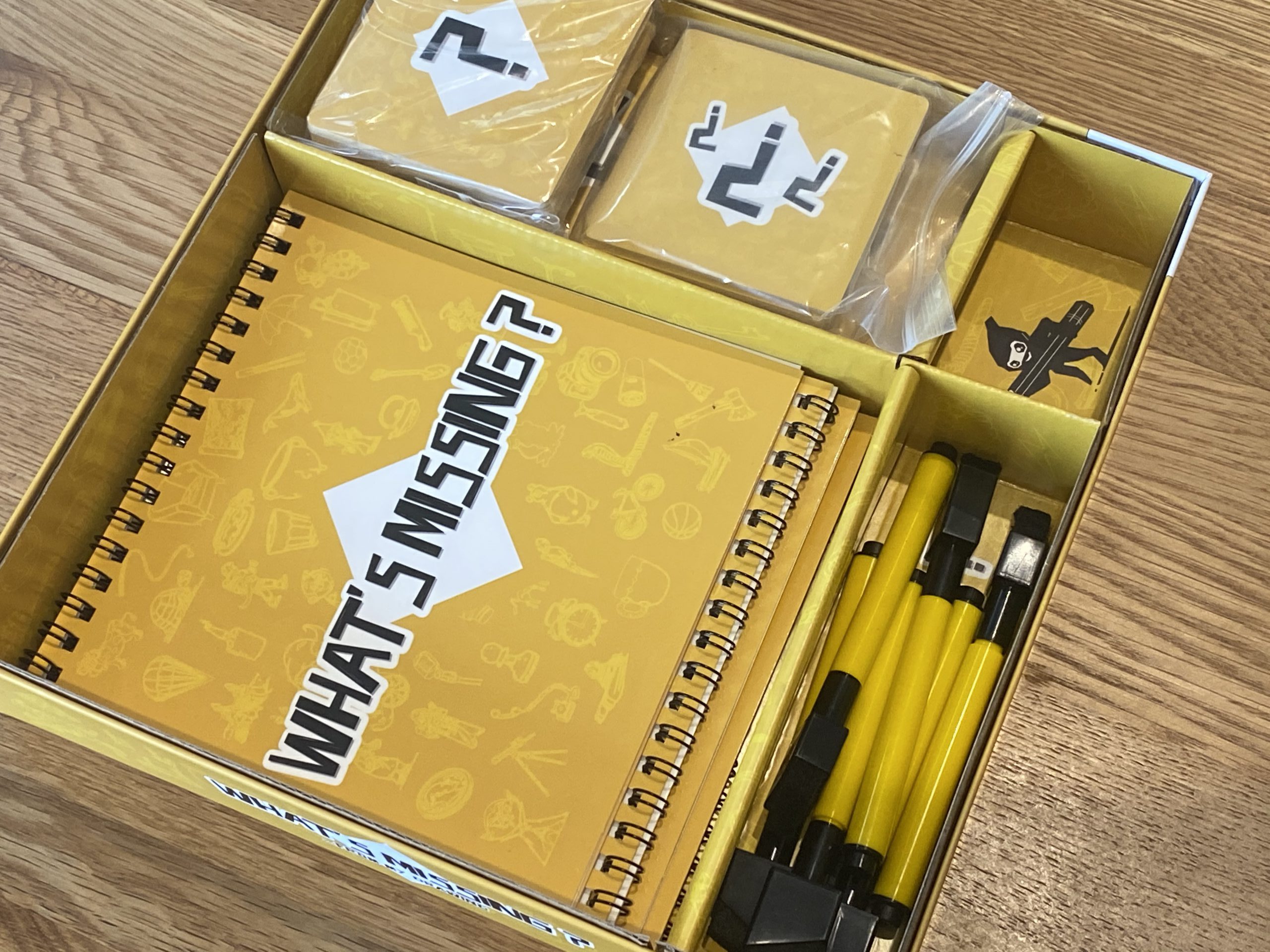 When all players but one are finished, a ten second countdown will be initiated, effectively forcing the end of the drawing phase in a timely manner. Now, every player removes their card from beneath the plastic and flips it over so that no one can see it. Now, each player (in turn) holds up their drawing and lets the others examine it, whilst asking “what’s missing from my drawing?”

If any player should successfully guess what was missing, then that player will score a point (tracked by claiming the drawer’s card.) If no player can guess what was missing, then the player who did the drawing loses a point (by discarding one of the cards they have won, if any). You can kind of set your own limits in What’s Missing, but in general, we play first to five cards wins. 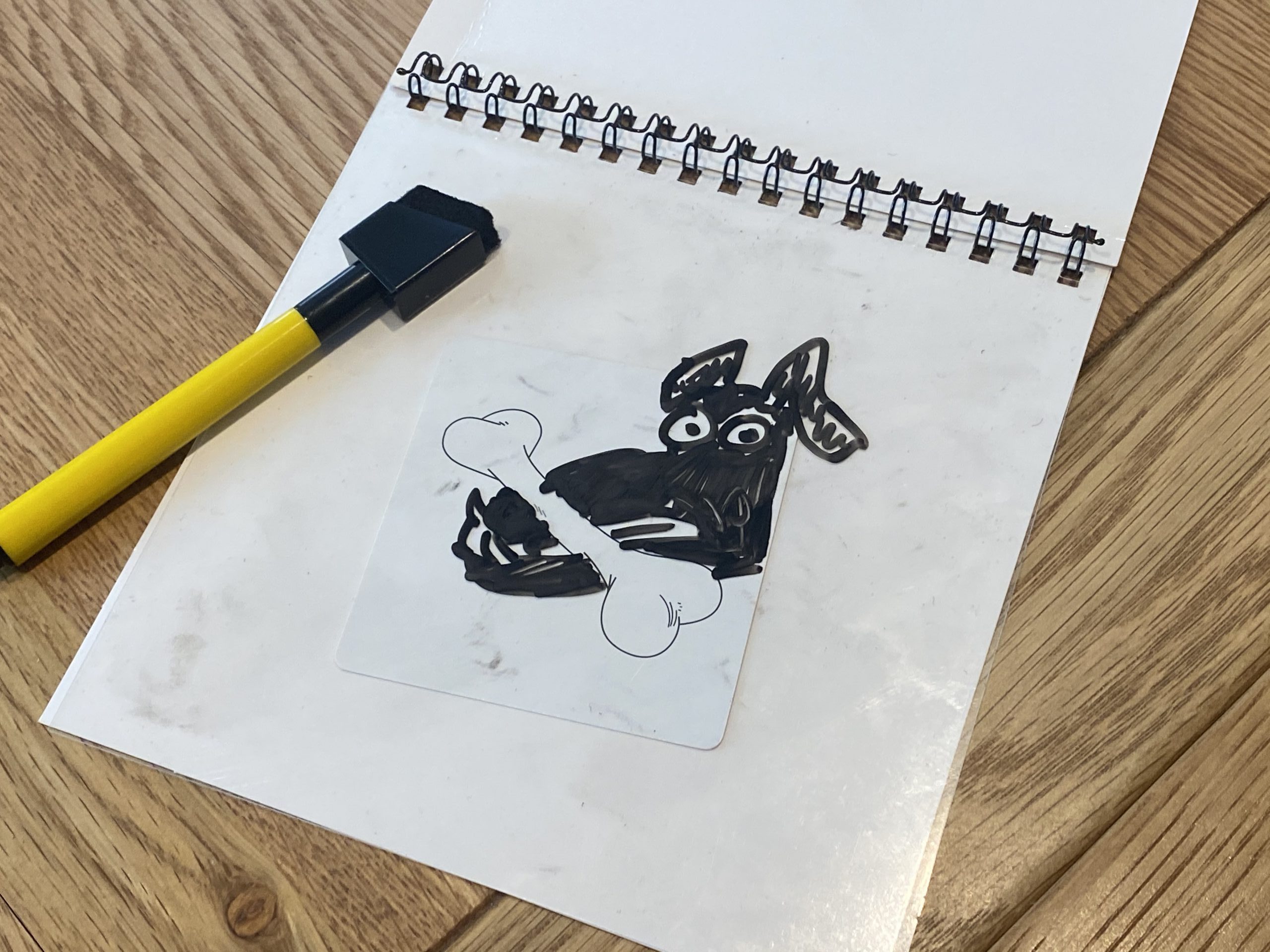 Firstly, let’s talk about what I like about What’s Missing. Having played it with kids from three up to twelve, and from adults who have both a lot (me) and almost no gaming experience (my mum), I can say that What’s Missing is incredibly versatile. Even though they don’t really follow the rules or scoring, very young kids can be involved just through the drawing aspect of the game, whilst by five, kids are fully able to understand the concept. Older players, of course, understand the game and can become very creative with how they include the cards in drawings.

I also like that What’s Missing feels like quite an innovative idea, even though it is incredibly simple and straightforward in nature. The components are very basic, and everything just works as you would expect it to — good quality pens, completely reusable pads, loads and loads of cards. Getting setup is simple, as is teaching the idea — which can be done in less than five minutes. 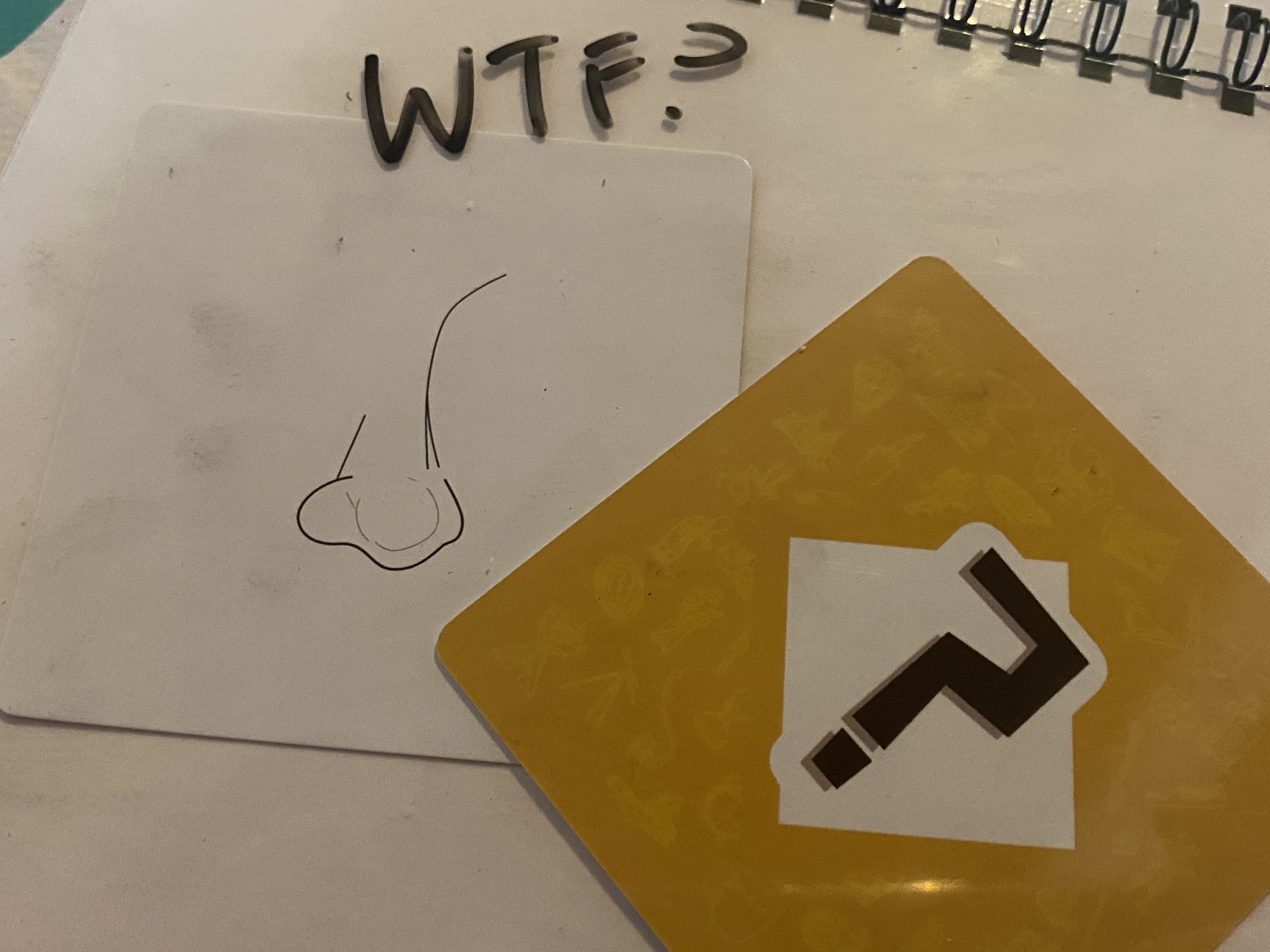 On the downside, the biggest issue with What’s Missing is that some of the cards — regardless of difficulty level — can be tough to accommodate into pictures easily. This is certainly true for younger players, who (perhaps because I am soft) will often hand back four or five cards before agreeing that they can actually use one. Even for adults, there are some really tough cards to draw interesting pictures around.

Despite this one flaw, we’ve had an absolute hoot with What’s Missing since it arrived, and I’m struggling to think of a better game to play with my kids besides perhaps our family favourite, KingDomino. What’s Missing strikes the right note between fun and competitiveness and crucially, it accommodates players across the full age range, even if our youngest doesn’t play it “properly.” 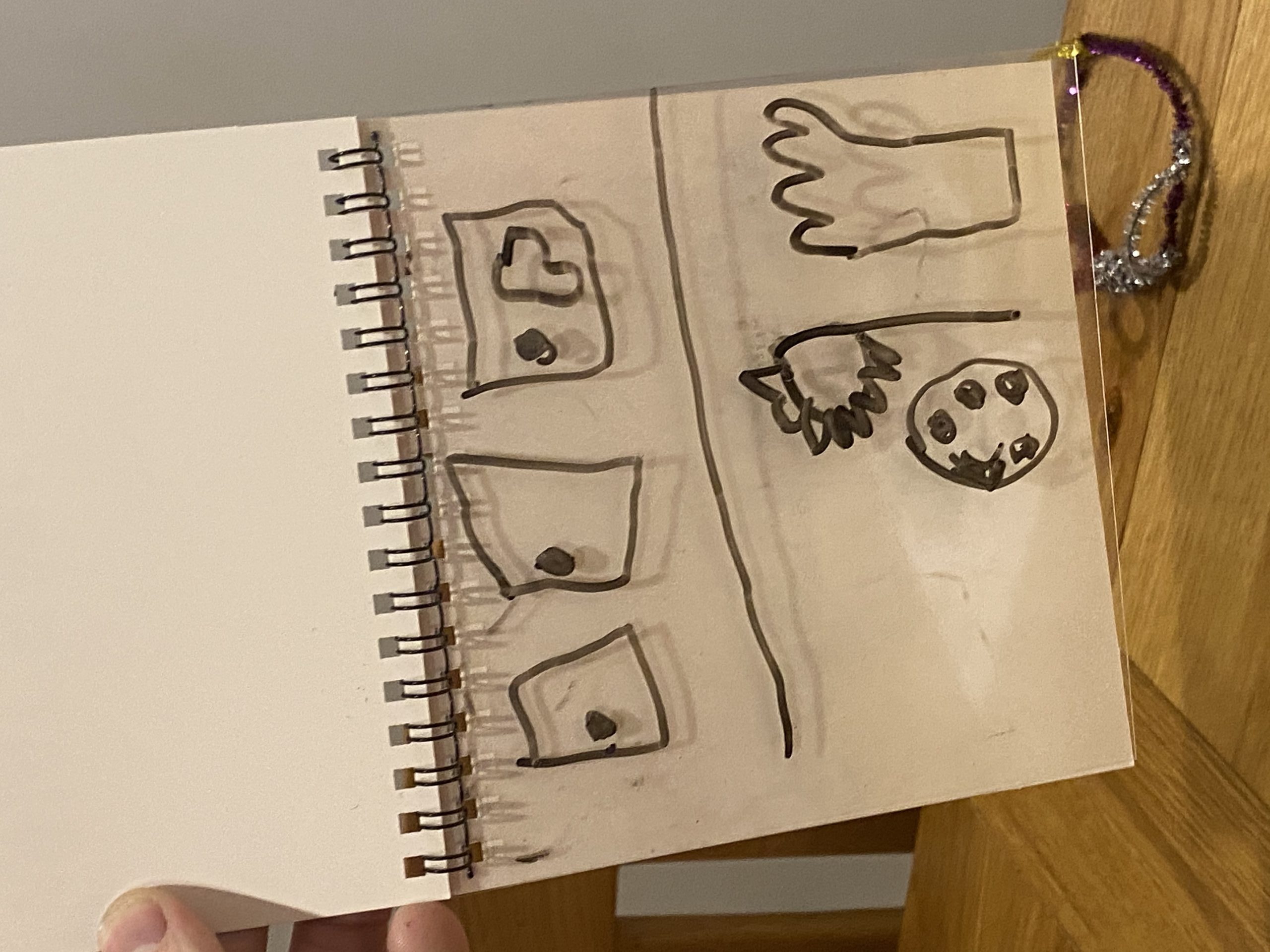 What’s Missing is a party game that I can actually get behind, and with support for three to six players (of the ages I’ve mentioned) it has real range. What’s Missing isn’t perfect, and house rules like being able to mulligan cards may be necessary, but that won’t matter once you’re in the game. It offers a good few hours of solid fun for young or casual gamers, and it’s a great filler or warm up game for more dedicated hobby gamers. Overall, it’s a great addition to any collection.

You can find What’s Missing at 365Games, or via your friendly local game store.