Tools Up! Season 1: Garden Party — We now have plants!

After having quite a bit of fun with Tools Up! I was pleasantly surprised when the developers announced a Garden Party DLC, which includes three drops of content. The first episode is the only one that’s out, and has just launched, containing some new skins, a tree house and 15 new levels to play and explore.

For those of you who don’t know Tools Up! — it’s a couch co-op game where you and your friends are decorating and renovating a house, similar in play to Moving Out, but not quite the same. Although, in the Garden Party DLC, you are actually moving furniture in and out of houses, bringing the game even closer in comparison. Dann and I 100’d percent the entire DLC in a few hours, working together to master a bunch of gardens.

The Garden Party DLC assumes you remember how to play from the previous go at the game, which was fine, but then instantly starts introducing new tools and new tasks. You can plant seeds, water plants, dig holes, plant trees and move furniture in and out of the level. Dogs are, all of a sudden, helpful and raccoons are the new enemy. And let me tell you, raccoons suck in this. They will throw your items, laugh at you, and just stand in doorways so you can’t move in and out.

A lot of these new tools or ways of doing things are introduced to you, then taken away, which I always find weird. First I was given a watering can where I could easily fill up the can, then water four plots quite easily and directly. This was shortly replaced by a hose, which needed an additional player to turn on, had three modes to it (getting extremely chaotic at the end), could make messes, and barely seemed to water things on low. I missed my watering can, which only came back at the end of the DLC. I find these ways of doing things to be a bit unfair, but you do start to appreciate what you have. 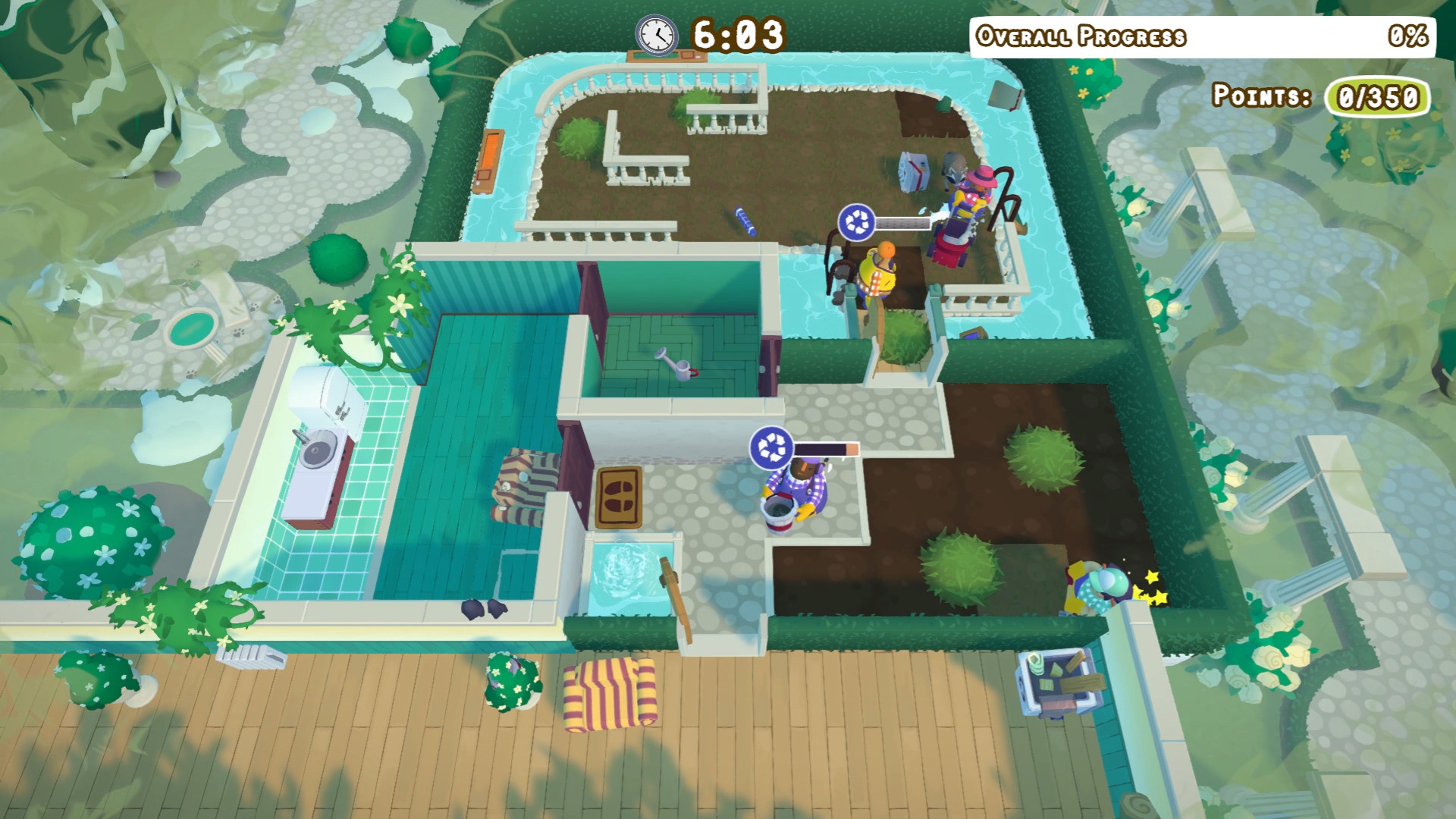 The tree house where you can select levels, much like the giant mansion previously, is exploreable, which is cool. Unlike the long waits when climbing ladders and the strangeness in movement on the elevator, moving around the tree house is much easier — with vines that just teleport you to the next area. There is one longer elevator-like bamboo thing which does take some time, but it’s only used once at about the halfway mark.

There is a good variety in the levels, as you are always introduced to new items and tools, it does feel like each level is different. Some are really challenging — I find the levels with moving water to be quite a challenge, especially ones designed to be more of a one-way-system, which a few of the levels were. 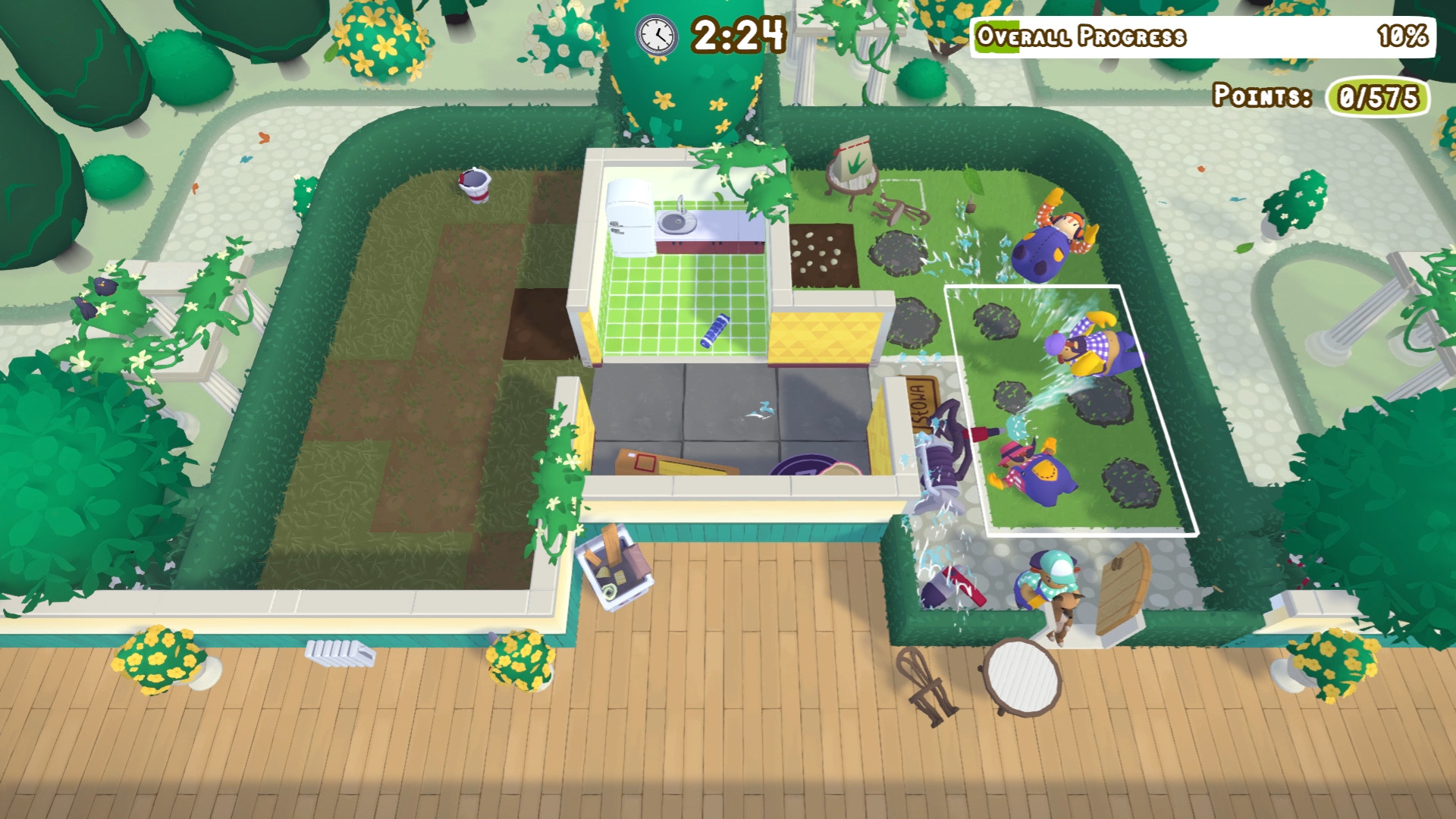 My biggest complaint with the game, which I feel is the same with the base game, is the level of polish. There were times when plants simply wouldn’t go into the dug holes, for no reason at all. There have been times when items have been lost to water, getting stuck under and creating walls so we can’t move but also unable to be removed so we can’t actually get out. These bugs make or break games like this, where you are constantly trying to work together and communicate for a common goal. I feel like adding in a few features like the blueprint highlighting the “messes” that need to be fixed or items that need to be removed as the timer gets close to the end (as sometimes they are just a challenge to find) would really help, for example. Also, if you are going to have moving furniture, it shouldn’t glitch and be so difficult to do with two players.

Either way, Tools Up! Garden Party, so far, is a fun addition to our home and we do enjoy playing through the levels, as it’s a simple and fun multiplayer game that gives us something new to do. We quite enjoyed playing through it and are excited to see what is to come in the rest of the Season. It’s nice to be doing something garden related and outdoors too!

You can find the Garden Party DLC on Steam or Nintendo Switch.