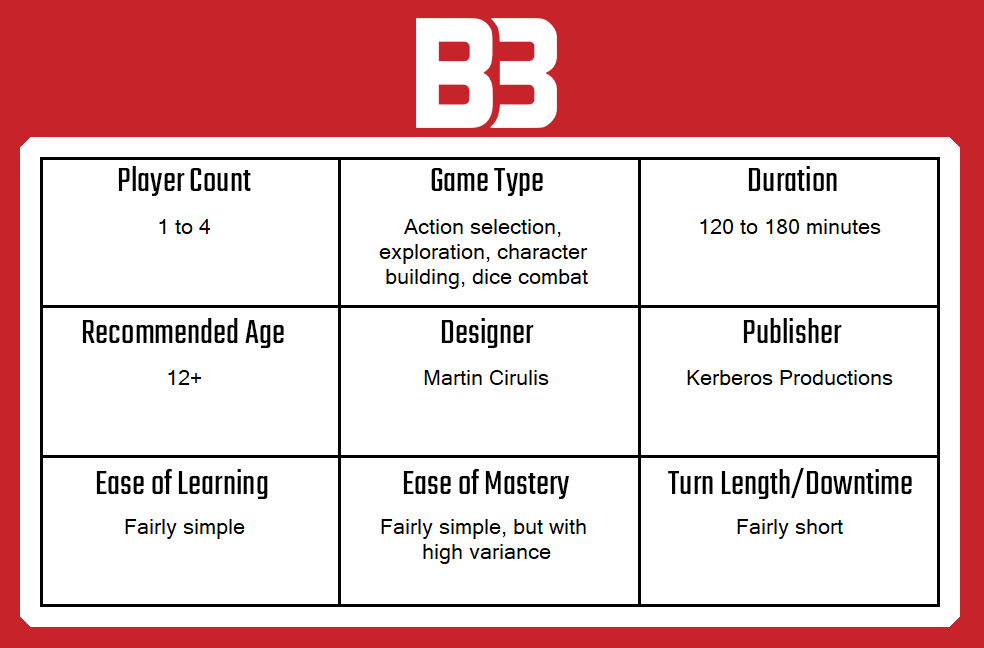 The agents of SOLFORCE have been given a mission — infiltrate THE PIT, a diabolical alien super-laboratory, and destroy the alien mastermind in command. THE PIT: The Board Game is a sci-fi dungeon-crawler adventure set in the SWORD OF THE STARS universe of video games. 1-4 Players take control of 4 SOLFORCE operatives as they make their way through the hallways and rooms of THE PIT. 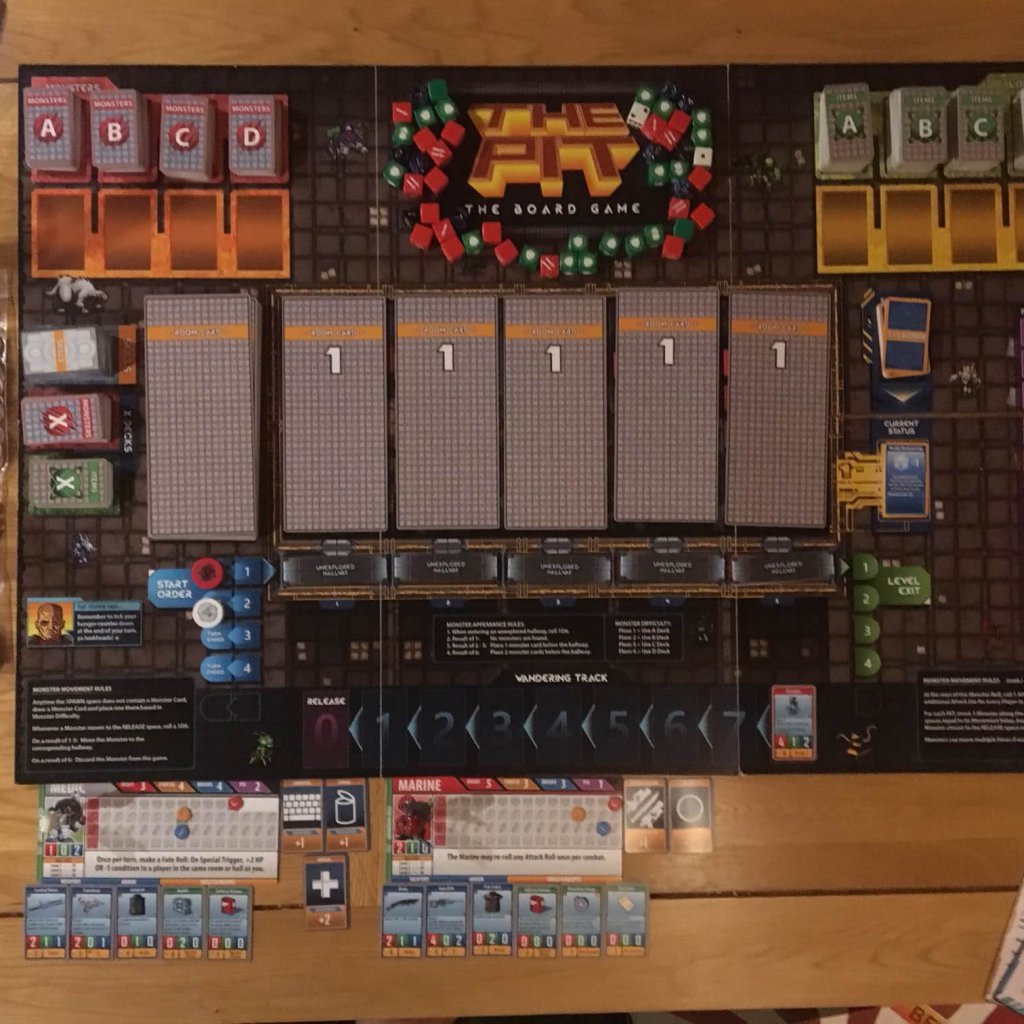 I always welcome the opportunity to work with developers ahead of Kickstarter or even retail release dates, especially when the subject matter for the game in question relates to one of my favourite indie video games.

THE PIT is a board game that is based on a brutal and very interesting roguelike that made it onto PC around five years ago. Whilst the video game offered a fairly traditional take on the roguelike genre, the board game interpretation has a number of fairly unique systems, and a huge amount of potential for variability, which make it rather interesting as a tabletop proposition.

The version I have access to (labelled BETA) includes a large static board that is then randomised on each playthrough by the a large deck of room tiles and then multiple decks of monster and item cards labelled from A to D. As players progress through each floor of THE PIT, the enemies in those rooms become progressively more challenging to defeat, whilst the rewards for doing so become — accordingly — more powerful.

As a result, THE PIT can be quite a long game, which certainly gives it the feel of a video game. There are four classes of hero character including staples like The Medic and The Marine, each of which has variable statistics and starting items. Working as a team is important, because THE PIT gets bloody hard, and even if you intend to play solo, you’ll almost always want to include at least two complimentary heroes in your squad. 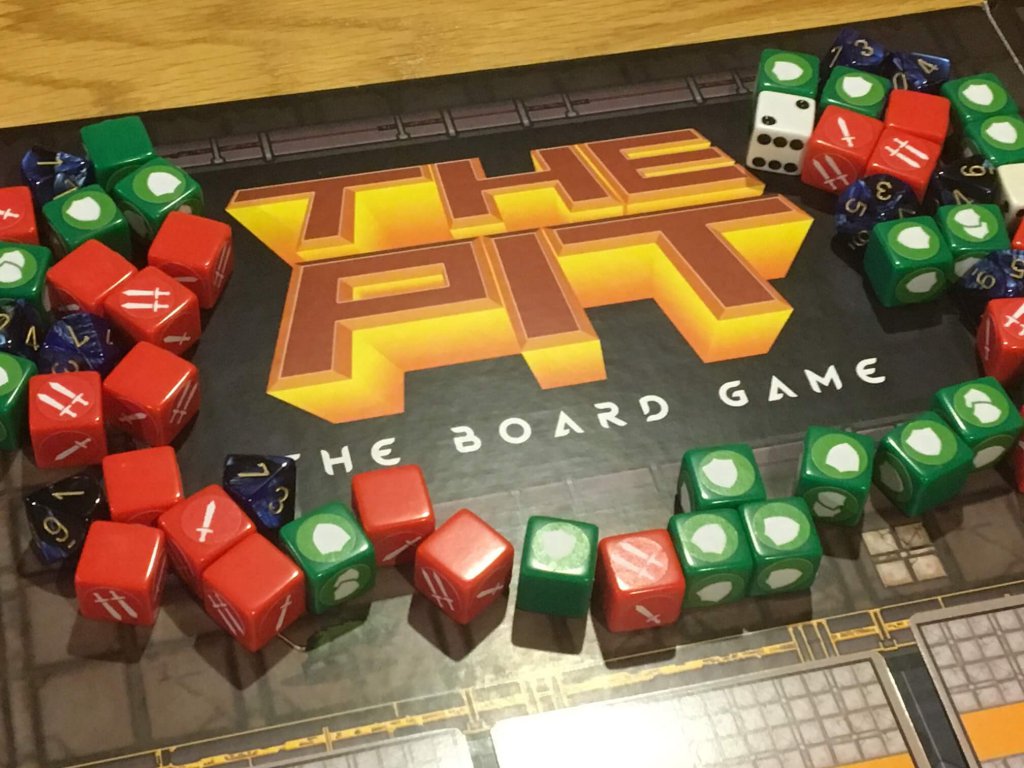 It would be rather unfair for me to judge THE PIT based on the BETA version that I have here because it is reasonably “well loved” and is clearly still undergoing final development. That said, it actually shows an awful lot of promise for the final version and there are many things that I already like about it.

The large board, for example (which doesn’t currently even fit in the box) looks fantastic and following a, reasonably in-depth, first time setup, offers very clear information about the status of the game and what to do next. Each of the creature and item decks has a clearly marked location, whilst the current floor, the ‘wandering monster’ track, and the corridor spaces are all obvious as well. Room tiles take a moment or two to familiarise oneself with, but it isn’t long before the common visual language of the game ties them in nicely.

The main board is accompanied by a player card for each of the character classes, each of which offers starting statistics (ammo, hunger, health) and other information which really speeds up setup. Each character is represented by a miniature (whilst all monsters are shown on cards) which appears to be 3D printed, but I understand that in the Kickstarter and retail version, these minis will be traditional casts. It also looks like certain monsters could be produced as minis either in the base game or as stretch goals.

The monster and item cards all feature cute, cartoonish artwork that is reminiscent of the video game. Key stats like health and damage are shown, as is a decent visual representation of the enemy in question. These enemies are drawn from the A-D decks based on the current level or as a result of specific instructions from the room. Loot is drawn from A-D decks in the same way, which is a fantastic way to tie everything together in a common way. The final thing to note is that there are so many cards in each of these piles that you’ll almost never work through them — I’m not sure if all of them will make it to the final cut, but I do hope so! 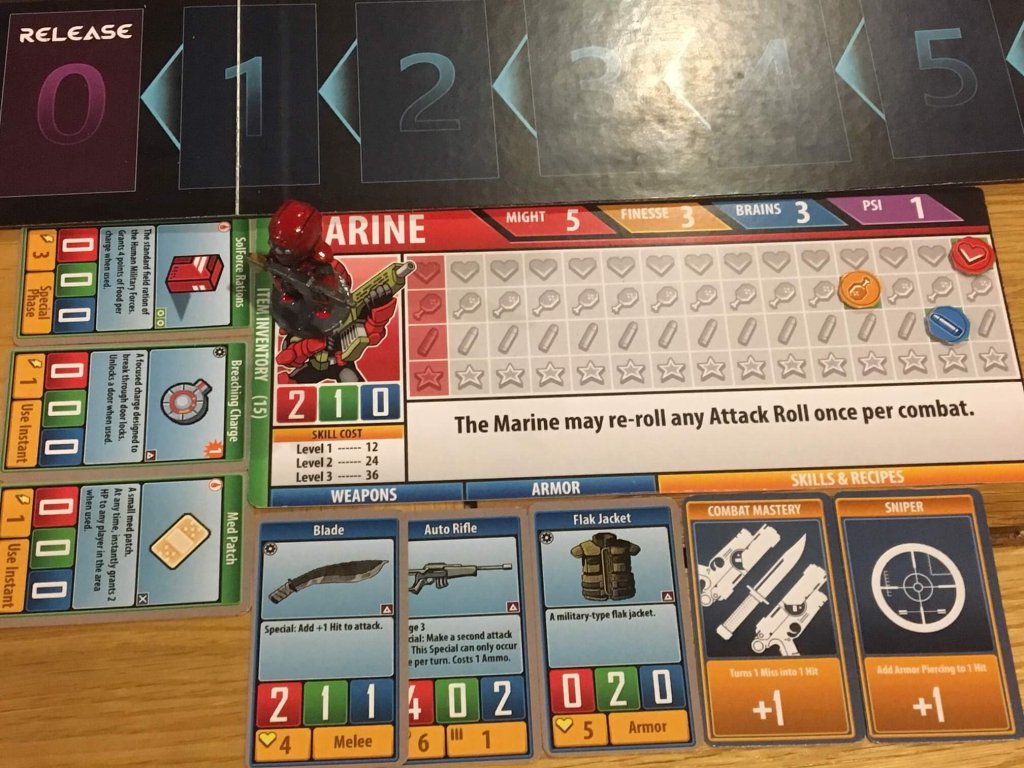 Turns in THE PIT couldn’t be much more straightforward. Players simply progress down an abstracted main corridor towards the level exit, opening doors into the five randomly placed rooms for that level and defeating the enemies therein. Usually, each new section of corridor will feature one or more randomised enemies that are generated as the result of a simple roll that is explained on the board. Enemies in rooms are generated based on an easy to understand table that shows what to do based on the current level.

Doors have to be unlocked or smashed, which is the result of a simple check, but once they are open, the player characters simply step into a room. Combat is dice based and works based on a three dice system. Both player and enemy characters have access to red (attack), green (defence) and blue (fate) dice which are used to resolve combat. Once declared, the attacker rolls both attack and fate die, whilst the defender rolls defence and fate die – in literal terms, another player rolls these die for enemy monsters, as THE PIT is a cooperative game.

There are hundreds of dice in the box, because these dice stack based on the number shown on items that you craft or find and on skills earned by defeating monsters. It is not unusual in the later levels to roll more than ten dice, for example. Attack dice deliver hits, defense dice cancel them and the balance of hits is the amount of damage that the defending creature takes – simple. Fate introduces a small twist in the form of variable possibilities based on the character in question, their active weapons and skills, or the text written on an enemy card. For example, some monsters will damage armour, whilst some weapons will add extra hits as the result of a fate die outcome.

Once the heroes take a turn, the monsters will usually shoot back and this carries on until all the monsters (or indeed, all the heroes) are dead. At that point, the heroes may search the room – this is achieved by drawing cards from the relevant deck as specified by a table that is just as simple to interpret as the monster spawning. Players repeat this process, gaining items and skills as they go, until they get to the end of the corridor, at which point they’ll move further down into The Pit by respawning new rooms at a lower level. 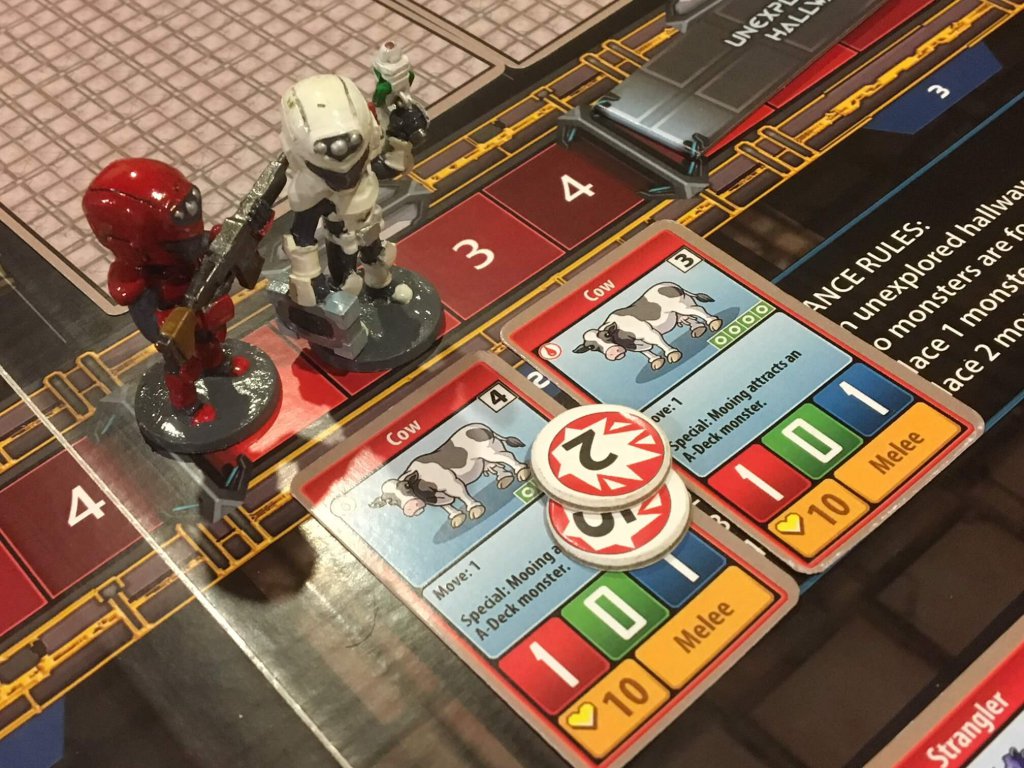 Ultimately, despite a fairly long setup (which is kept much shorter if you properly organise the huge box of stuff) and a bit of work to get into it, THE PIT is a very enjoyable game. What comes across from the very beginning is the excellent way in which video game mechanics and feel have been integrated with a few traditional table top mechanics to create an accessible whilst fairly deep overall experience.

The choice of hero characters and their starting weapons, armour and abilities are nothing new, for example, but the inclusion of hunger and ammo usage is quite unusual for a board game, yet it adds a sense of impetus and urgency to proceedings. Crafting is not entirely new in board games, but in THE PIT it is achieved by collecting enemy cards and then simply matching symbols on them to complete recipes. These cards can also be traded in for skills, so by using the collected enemy cards for both outcomes, the game is just very clean and easy to manage.

Whilst we’re talking about management of the board state, I should mention that I thought that handling so many decks of different enemies and items would also be quite clumsy, but it certainly isn’t. The simple use of alphabetically ordered decks and the fact that each one has a place on the board meant that I set up my first game very instinctively, without even really looking at the manual. You’ll certainly need to keep each deck separate when storing them, but I think most gamers do so nowadays anyway.

Combat is dice based, so it is quite random, but the inclusion of fate die can change things in unexpected and fun ways, whilst the fact that items and skills have such an influence on combat takes some of the sting out of things. For example the Marine can attack twice, whilst the medic can heal – using these skills to their maximum potential is important if you want to succeed in THE PIT.

And succeeding is quite hard. The Pit can be explored for as long as you want to really, but if you want the full experience then there are ten levels to explore in all. The room deck is weighted to become considerably harder after the opening level and drawing creatures from the D or X (which is like a wildcard) decks is quite daunting. I didn’t actually face a boss encounter, although I did later read that there is one in my X deck – I’m certainly looking forward to seeing that in the finalised version, especially with the minis involves. 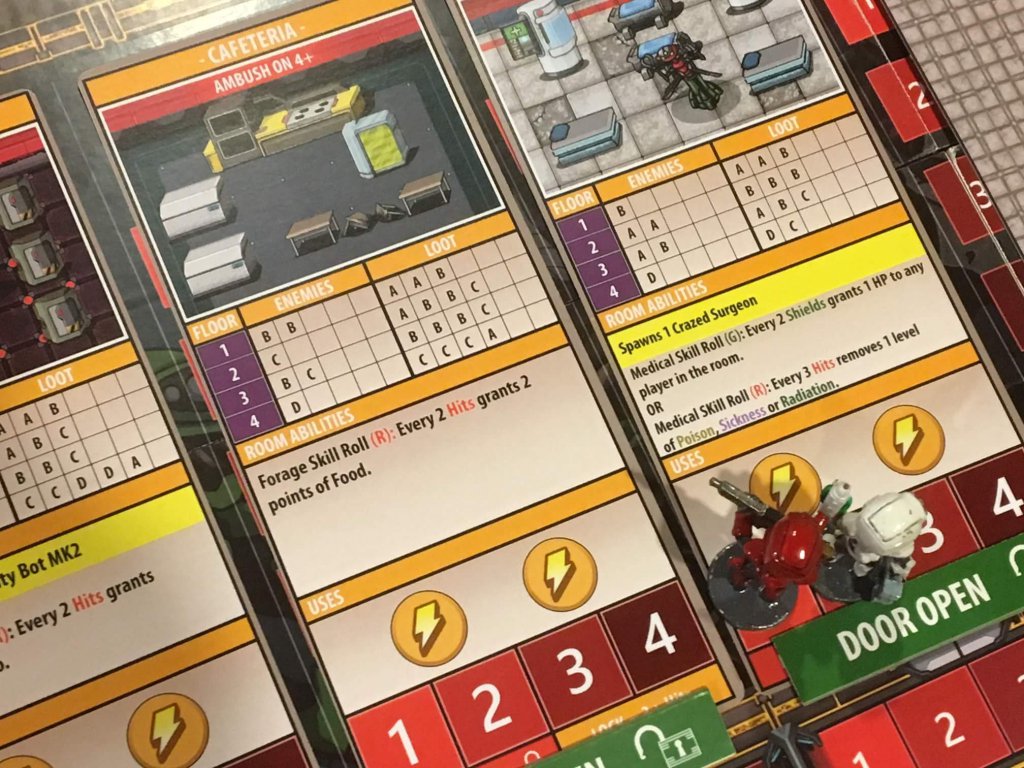 It would be unfair of me to say that I know enough about THE PIT to provide it with a final rating, which is why I’ve called this piece a preview rather than a review. That said, I am confident that the game is already good enough to recommend and with a few minor tweaks (most of which are the obvious ones – like the board fitting in the box) it could be fantastic. The BETA version makes me feel as if the final game will be unusually generous with its components, which could lead to a game that has exceptional replay potential, whilst mechanically, it’s also unusual enough to peak the interest of both tabletop and video game fans. This is certainly one to watch.

You can find out more information about THE PIT: The Board Game on the website of publisher Kerberos Productions. The Kickstarter will be live on May 10th and we will provide a direct link once it becomes available.