Rogue Legacy 2 redefines the roguelike genre, without changing anything

I don’t have a great relationship with the roguelike genre. The idea of repeatedly throwing myself at a variable (and often unfair) task over and over again, usually for marginal gains (if any) and always for the reward of doing the same thing again…. It’s just not me. But Rogue Legacy 2 is different — Rogue Legacy 2 is excellent.

First of all, a bit of history. Whilst I never played it at the time, I am reliably informed by The Internet that the original Rogue Legacy was inspired by From Software’s Dark Souls — and you can certainly feel that when you play both the original game and this sequel. Where many roguelike games feel like punishment, Rogue Legacy 2 offers several features that feel like continuous progress — some overt, some covert.

The game begins with the player controlling a noble knight — and we’re talking about a relatively classic Metroidvania-style side-scrolling platformer here — who must adventure through a citadel that has clearly been under some kind of sustained attack. As it turns out, this attack has been going on basically forever — and when our character dies, they will quickly be replaced by one of three heirs. 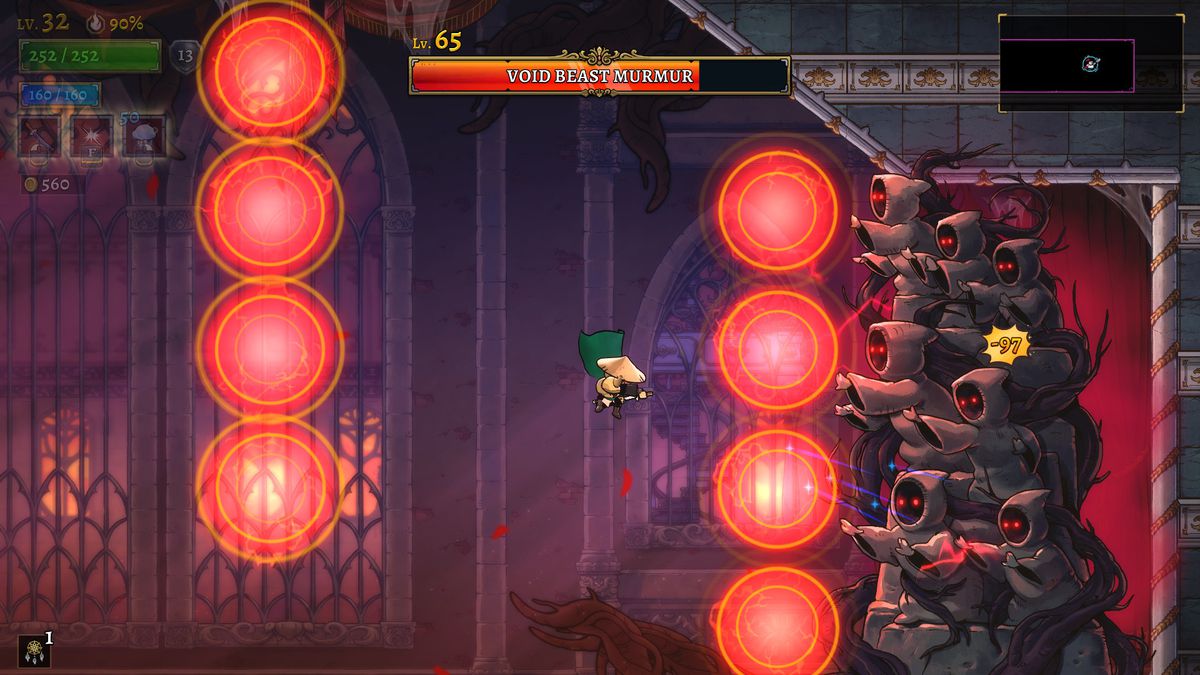 Thus, the basic gameplay loop for Rogue Legacy 2 is presented. The player works their way through as much of the castle as possible, killing enemies, collecting relics and loot, and hopefully defeating bosses. When that character dies (which they will) the player swings back to select an heir again — choosing one of three which will each be rolled with a random class, special ability and up to three traits.

After choosing an heir (who will become the player character for the next run) the player can spend money on either expanding their castle (by adding or upgrading rooms) or buying items at the docks. Room upgrades cover a huge range of things including everything from adding armour, health or increased damage, to unlocking new classes like the Valkyrie, Dragon Lancer or Assassin.

There are lots of nuanced buildings that do very niche things, and one minor criticism here is that Rogue Legacy 2 has the fairly standard roguelike issue of just expecting a player to understand these. An in-game glossary is provided, but there’s little guidance in terms of how to structure your castle, which simply means that as the player levels up and the building cost increases, you may find yourself priced out of essential buildings that do “boring” stuff, because you invested heavily in nonsense. 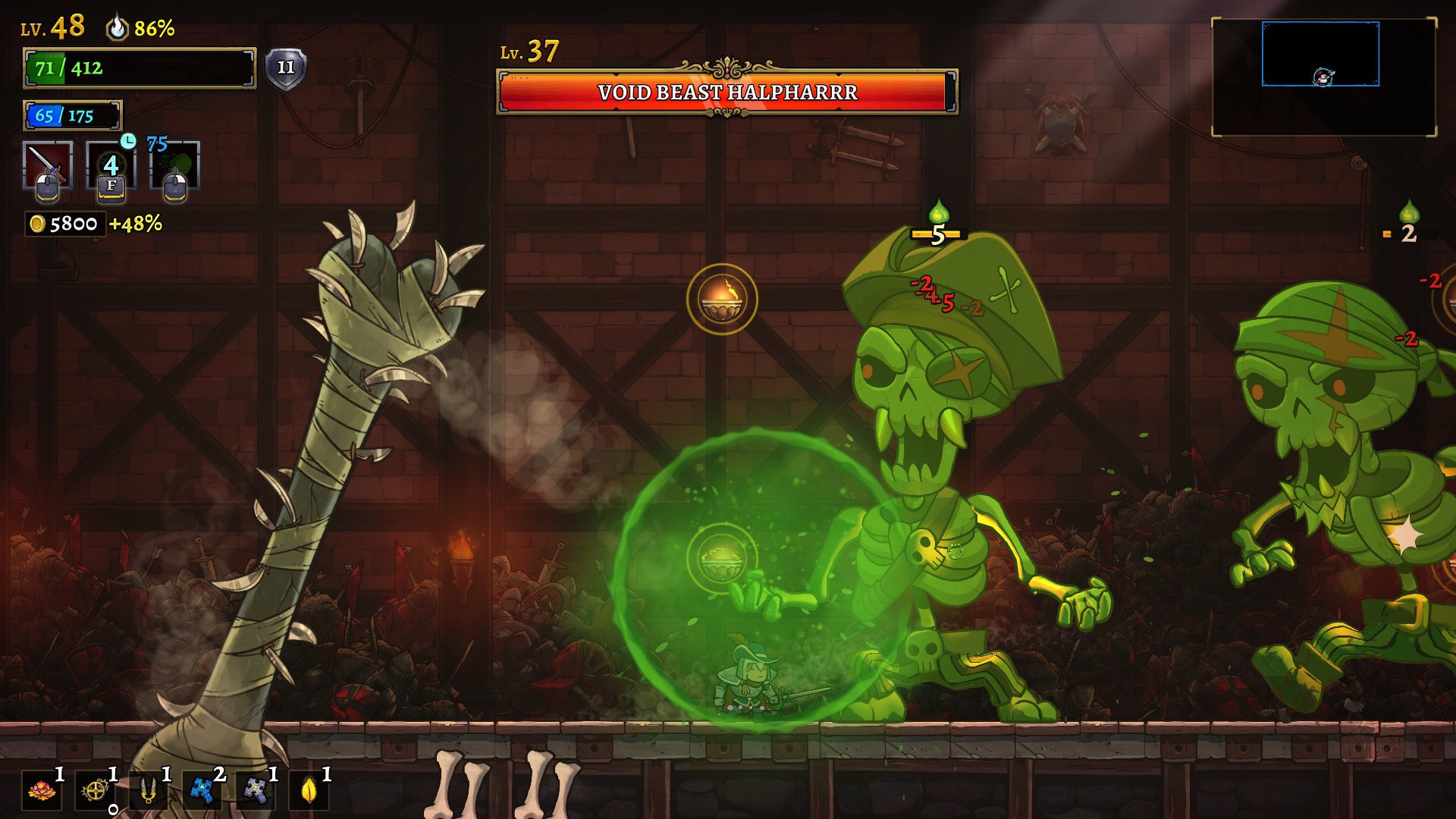 When it comes to buying items at the docks, there are two early upgrades to the castle in the form of the typical blacksmith and enchantress combo. The blacksmith can forge armour for you (as long as you have the blueprints) whilst the enchantress uses runes to create buffs that do things like add mana or life leech, or allow you to apply poison. Both of these NPC’s are essential to your success, since like the castle upgrades, the upgrades bought persist between runs.

One of the most fun aspects of the heir system is the traits that each new character brings. There are tens and tens of these — maybe hundreds — and each one brings unique strengths and weaknesses which feel fairly balanced. Some are functionally useless, but offer a bit more visual appeal or even comedy. IBS, for example, causes your character to fart quite a bit whilst moving, whilst Diva darkens the screen (except where your character and any monsters are) and then causes an eruption of applause and roses when a room is cleared.

There are several traits that increase gold drops, but these usually come with a cost or a negative effect. Pacifism, for example, means that a character can’t deal damage — but will gain more gold when picking up. There’s even one trait (which I haven’t seen recently enough to remember the name of) which effectively means you will die in a single hit, but will gain 200+% gold drops until you do. Some runs, I guess, are not meant to end in success — as long as at some point you build up the infrastructure you need to progress. 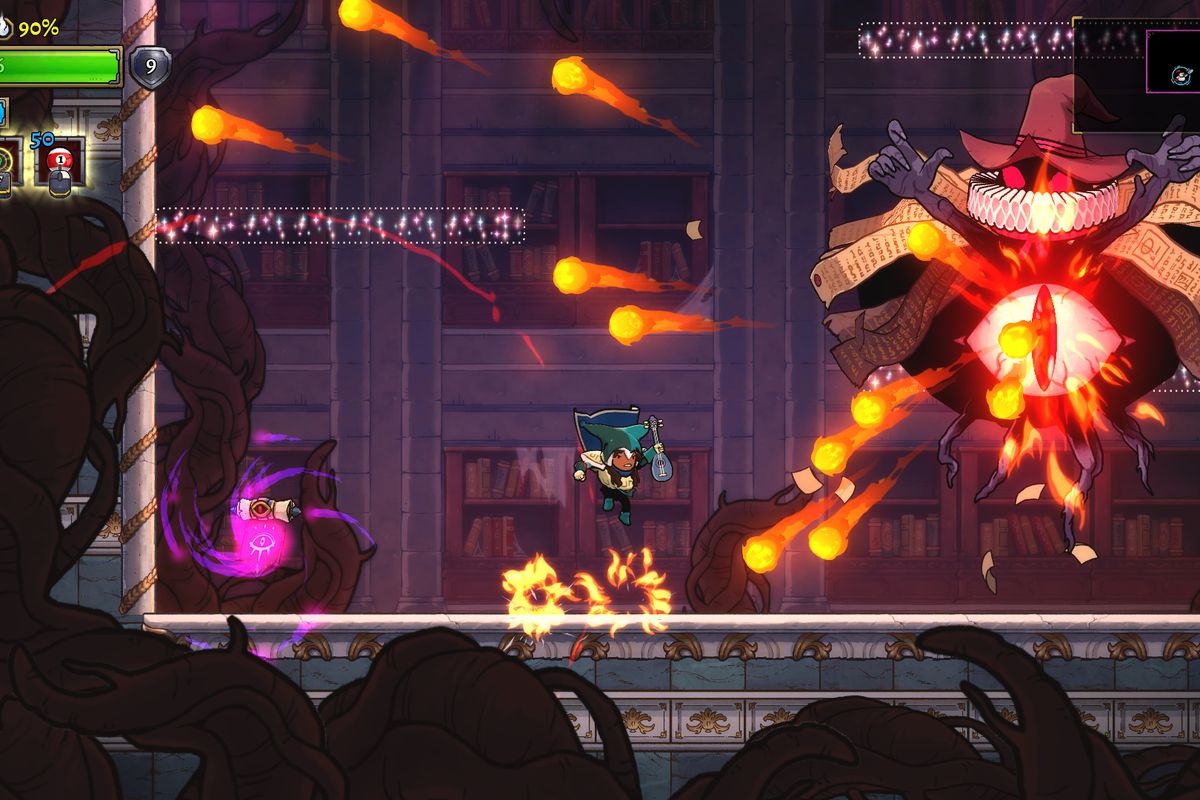 On that note, outside the starting castle area, Rogue Legacy 2 features several other, distinct areas. Each of these can be found from the starting hub, but in order to traverse them (and realistically survive) you’ll need to find certain magical items. These can be gained by defeating bosses — which can be extremely tough, or even nigh-on impossible for some builds. Nevertheless, fighting them is fun and varied, and in general (as with Dark Souls), you’ll learn a lot on the journey.

Rogue Legacy 2 is now — by some margin — my favourite roguelike, and probably my go-to side scrolling platform game. I love the visuals, the variety of locations and the heir system, and more than anything I like that I always feel as though I am making progress. The castle mechanic is good (albeit could use a few more tooltips) whilst the item progression feels as powerful as anything in a From Software title. Overall, Rogue Legacy 2 is well worth a look, even if roguelike games are not usually your thing.

You can find Rogue Legacy 2 out on Xbox and PC.