You may recall that BigBossBattle favorites Kerberos Productions (famous for creating the excellent Sword of the Stars universe) have followed up their debut board game (THE PIT, which we previewed here) with a rapid-fire surprise in the form of competitive card game Control!. The game is live on Kickstarter and you can back it here. Alternatively, you can also check it out on Tabletop Simulator by following this handy link!

In Control!, three to five players take on the roles of galactic empires that are hell-bent on taking control of the known universe through any means necessary. This involves drawing cards from a massive deck and then playing them onto one of the six planets in the game, each of which begins with one population. Players must use cards of the same suit in order to invade a planet and it is essential to have more strength than the current population of the planet. 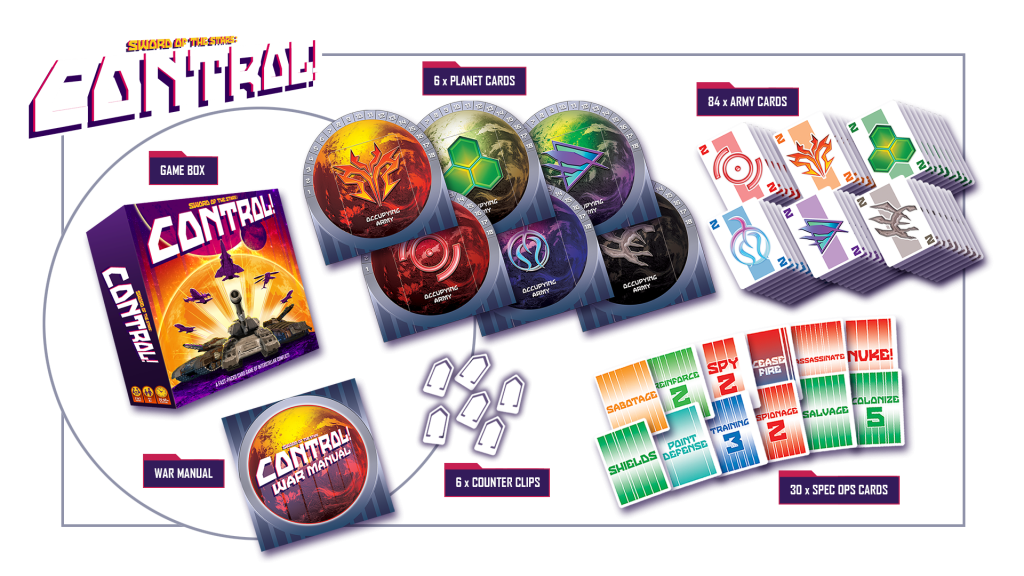 The total number of these cards then becomes the new population, so each time a new player wants to take control of the planet, she must effectively increase the size of her army to suit the new population. Spec Ops cards occur throughout the gigantic shared deck, allowing players to take special actions such as nuking a planet (and reducing its population to zero) or to colonise a planet and increase your own strength there by five.

Each player begins the game with just three cards in hand and each turn will draw two more up to a maximum hand size of seven. With six different suits (colours) of cards and a number of special cards, this usually means that it’s possible to amass hands of three to five like-suited cards before unleashing the force, but it should also be noted that one attack is permitted per turn, so hoarding a couple of intense hands until the closing turns is a risky strategy. 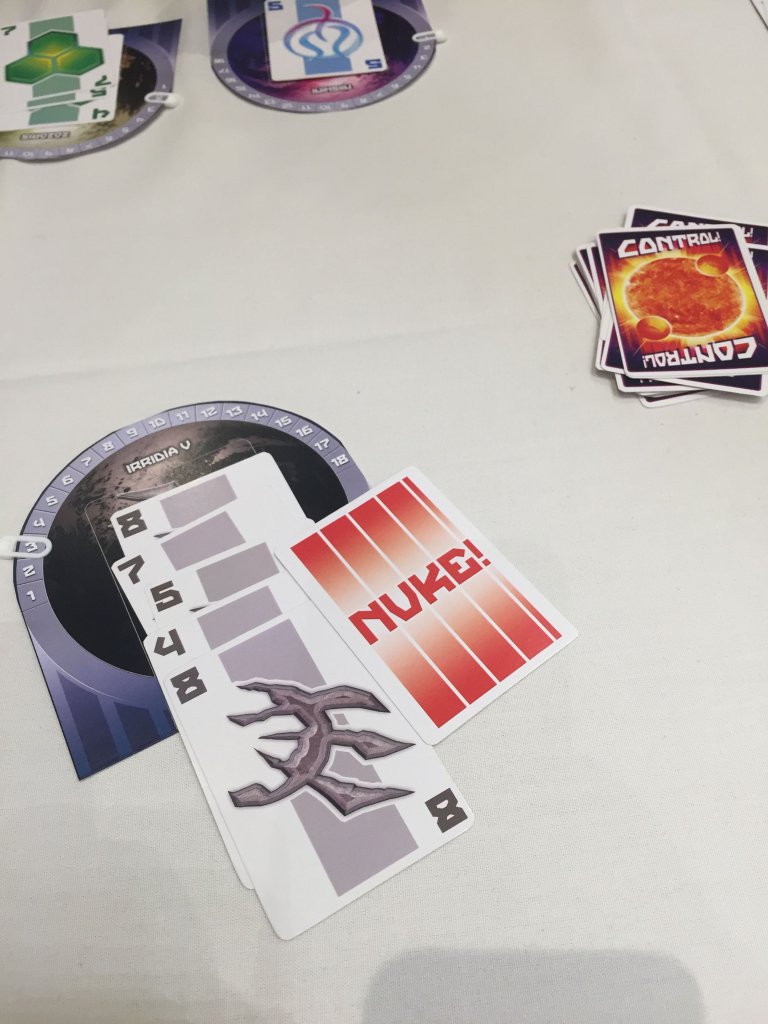 On that note, the game ends when a randomly seeded ceasefire card emerges from the deck. I’m not sure what this represents thematically (probably just the loss of interest from all parties, given the devastation that goes on during each game) but in any case, it signifies one final round of play. The player is the empire with the most points at the end of the game and a winner is usually declared after about fifteen to twenty minutes – such is the speed that things escalate in Control!.

I’ve only played a few games of Control! so far, but I wanted to publish an opinion on it as soon as possible, given the timing of the Kickstarter. Control! is a very different proposition to THE PIT, which is a much larger, slower and heavier game. Control! is fast and fun, making it an ideal way to start or end an evening, but I have a feeling it may lack the depth of some games – that’s OK though, given its speed. After just an hour or so with it, I feel compelled to experiment more with it and to try it out on different gaming groups to judge their reaction, but needless to say, if you’re looking for a fast-paced, competitive and fairly direct card game, then Control! might be worth a look.

Control! is currently funding on Kickstarter, you can back it here.