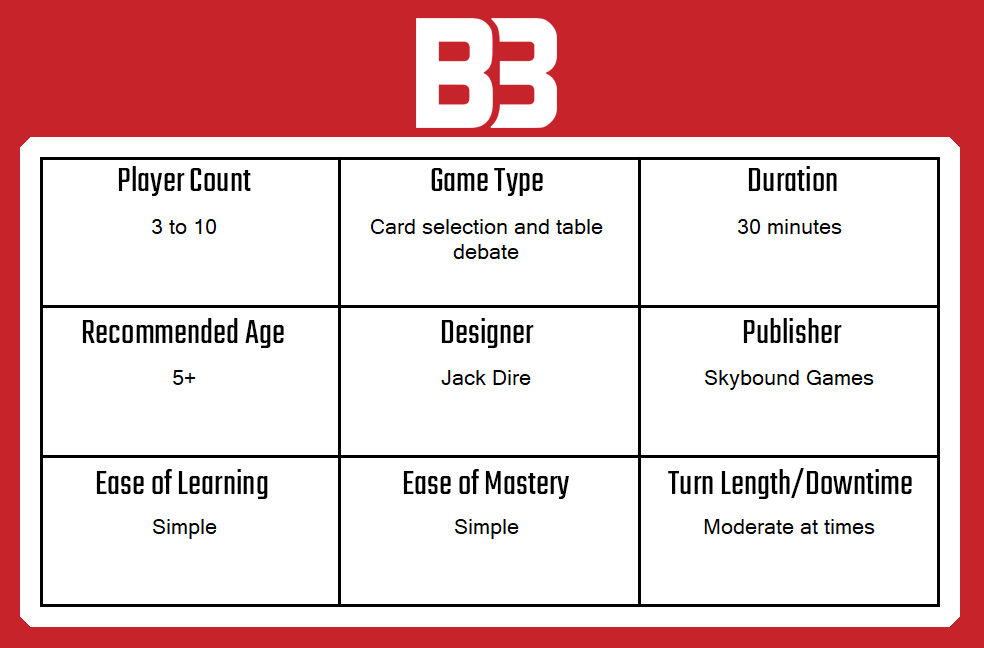 Until now, mankind has never been able to formalise the outcome of impossible and deeply compelling conflict situations such as who would win in a battle between Batman and a swarm of angry bees. Thankfully, Superfight lets players pitch battles based on scenarios just like that and more. It even spices things up by allowing players to modify the attributes of their combatants.

Superfight is a straightforward party game in the style of Cards Against Humanity. The players simply choose cards from a hand that is dealt to them and then, having used those cards to create an outlandish character, they debate their way through a battle between the two. Whilst CAH is a strictly adults-only experience, Superfight relies more on channeling the youthful exuberance and belligerence of its players than it does their ability to make the other players laugh or squirm — although both still happen on a fairly frequent basis.

Superfight is a game that benefits from having at least four or five players; at its minimum of three, it’s quite a bit less exciting. This is mainly because all games like this live or die by how much excitement can be generated among the players, rather than because the rules and structure are especially exciting. Superfight essentially offers players a basic structure and some props around which their own personalities can flourish and make for an exciting evening. 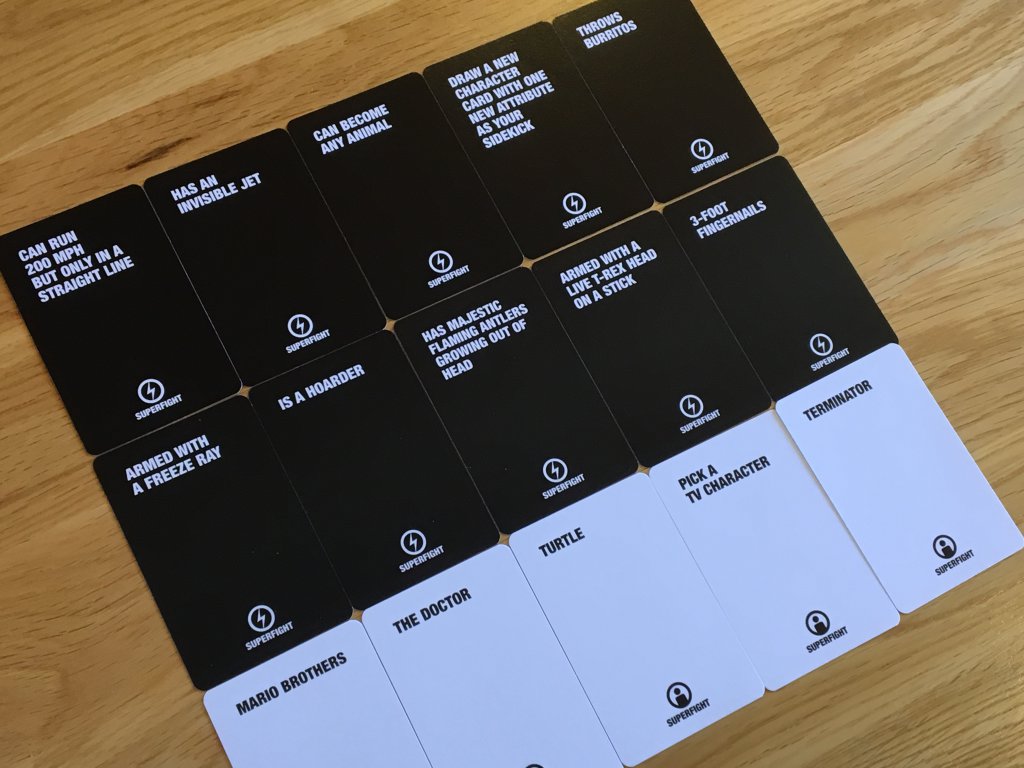 Given the relatively straightforward nature of Superfight, it’s fairly easy to describe the components at a surface level, but that wouldn’t be the whole story. The game consists of just a huge number of cards split about seventy to thirty, with the smaller portion being white and printed with the names of various characters, historic figures, superheroes or similar. The larger number of cards are black and come printed with various attributes or traits, such as weapons, equipment and similar.

The thing to note here is the quality of what is actually printed on the cards, which in this case is pretty good. The version I played is the fairly recent remake, which includes a few rule tweaks as well as a raft of updated options on the cards — I can’t comment about the older version, unfortunately. The range of characters for players to choose from is broad and mostly relevant enough to be interesting, whilst the trait cards are very nearly always funny, even though many of them are hard to justify as a positive attribute. 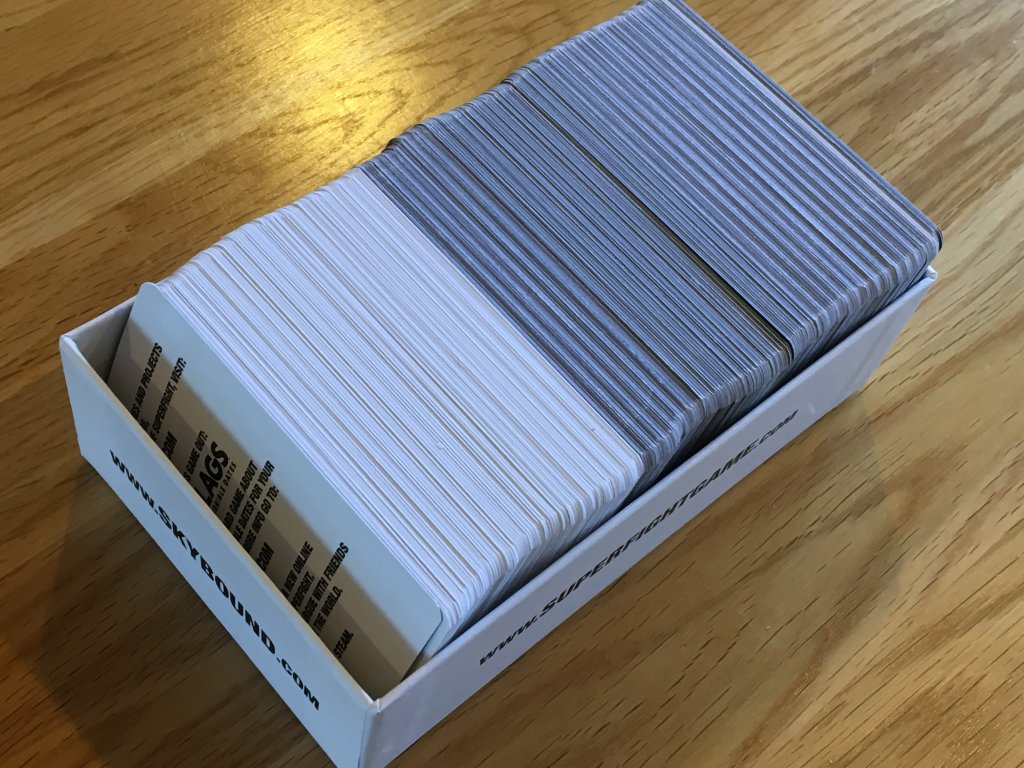 You might have guessed it already, but Superfight is fairly simple to play, regardless which of the two or three modes you choose to play it in. At a basic level, players are dealt a hand of both character and attribute cards, from which they choose one character and two attributes to make their case around. As an example, you might choose Hilary Clinton, who you also happen to make a hundred feet tall and armed with a flamethrower.

She might have to face off against The Queen, who could be riding a motorcyle and armed with a shrink ray. The players then debate which of their characters would win the fight, based on whatever nonsense they can come up with. Depending on which variant of the game you happen to be playing, the table decides who has argued most convincingly and awards a point. There are a few variants of the game including multiplayer variants, variable scoring methods and so on — all adhere to the basic structure that I’ve described and ultimately, Superfight is very straightforward. 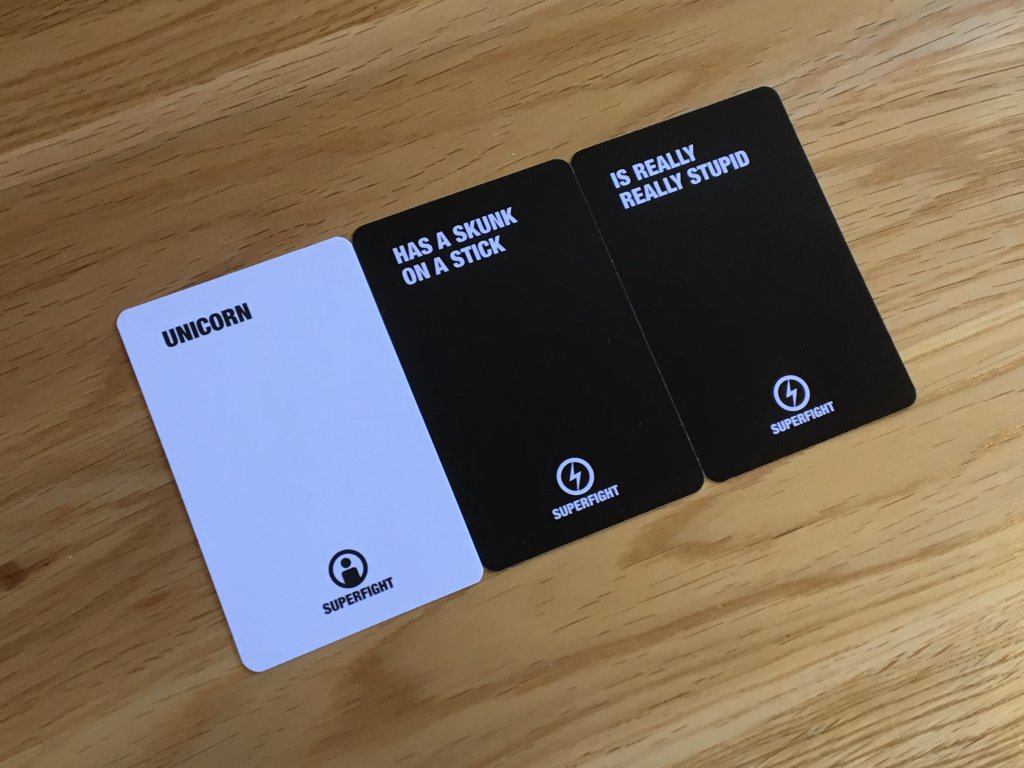 Interestingly, whilst I have always enjoyed Cards Against Humanity as a guilty pleasure when having a few friends over for drinks, I think the base game includes too few scenario cards and it does get boring rather quickly. I was pleased to find Superfight has a slightly more balanced mix of character and trait cards, which I think leads to more variety after repeated games, especially when each character receives two trait cards, so you’ll almost never see the same combination twice.

Aside from the actual cards, the main ingredient when playing Superfight is obviously who you play it with. Players who are naturally outgoing and/or charismatic will enjoy it more than those who are shy, so you do need to pick your audience carefully. Among friends or family, perhaps over an evening where people of several ages come together, the game really excels. Whilst the cards themselves are not offensive like those in CAH, it’s entirely possible for the players to scale bad language and mature themes to their audience, which is something I found added versatility to what is still a good drinking game. 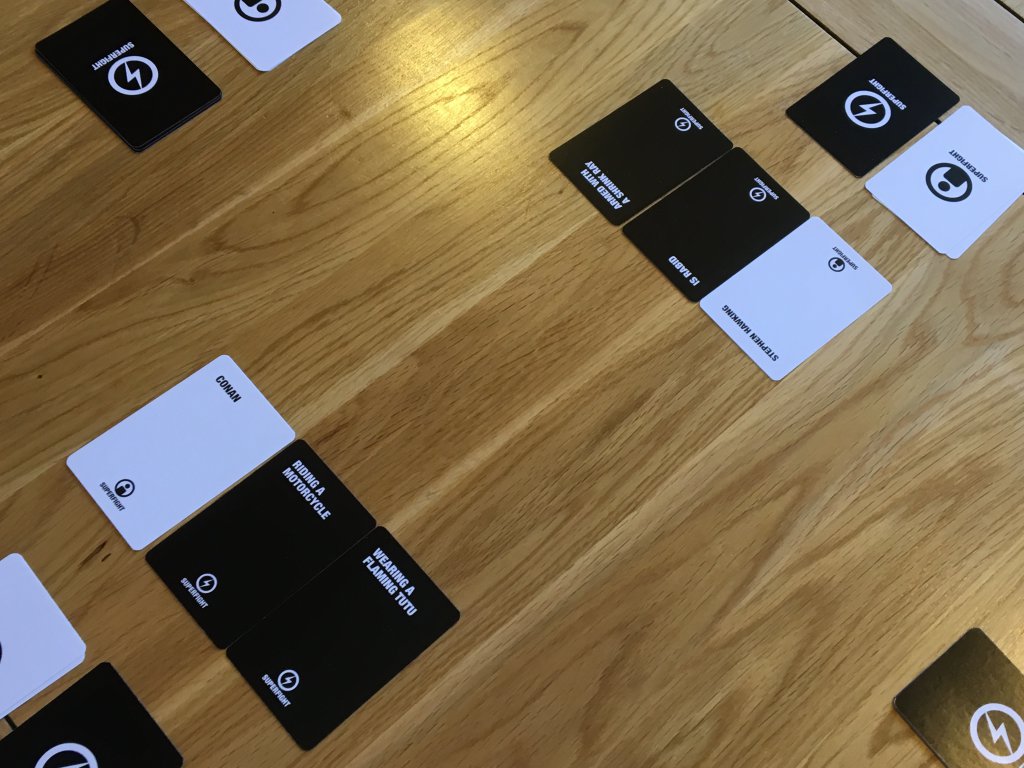 Whilst I think Superfight might have lived in the shadow of CAH because it both plays and looks similar, I really do think it’s a better game. It’s just as simple, but it requires actual interaction. You don’t simply put two cards together and read them out loud — you make a character and create a backstory; as a results it’s a much more engaging experience. It’s more variable and more inclusive than CAH and it has broader appeal across a wider audience.

On the downside, the Superfight way of playing is outright harder to get to grips with and can be a little exclusive against less outgoing people. I think that’s a relatively minor point, though, as you’ll know that going into it. If you have shy friends, you can simply pick a different game on evenings when they are in attendance. Worst case, it’s possible to modify the rules to be more strictly in line with CAH’s, which would remove the debating element. Given the price point and the fun factor, I think Superfight is a fun and lightweight addition to any collection.

A copy of Superfight was provided for review purposes. You can find out more about Superfight on the website of publisher Skybound Games.