Reclaim the Station with Science in Starlit Colony 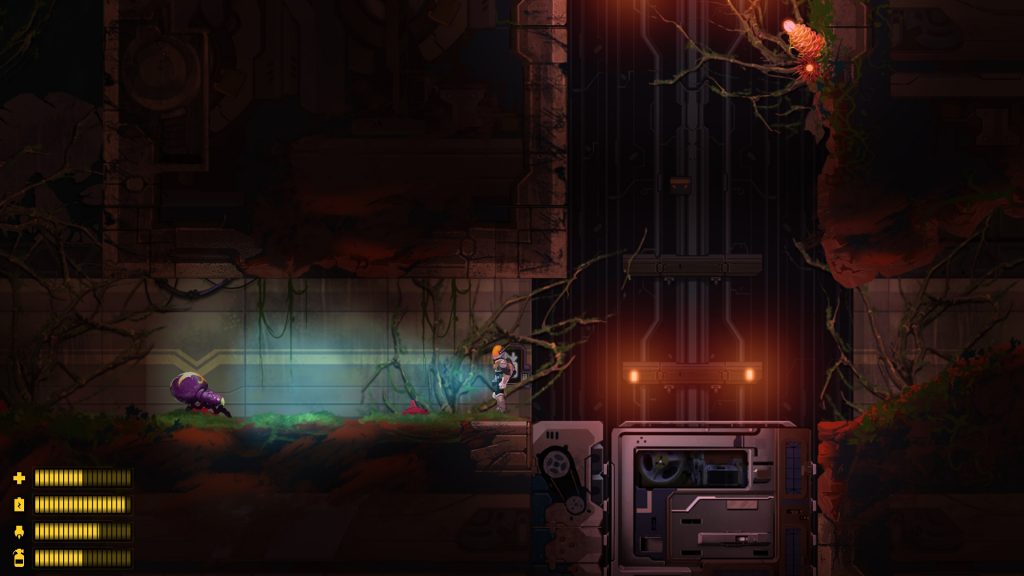 Starlit Colony was probably the biggest surprise for me at EGX Rezzed, tucked away in the corner of the Tentacle Collective section -a rarely celebrated effort by Payload Studios to make it more viable for developers to showcase at events- of the show, where the developer -Omni-Lab- had a double-booth set up for their adventure passion-project.

It’s a 2D, Action-Adventure title focusing on exploration and experimentation as opposed to acts of violence. A game that bares its mechanics as it hands them to you, meaning you’re fully aware of the skills that you have at hand, tasking you to push back the unknown, and it actively encourages you to toy with the environment and entities that populate it.

The crux of the game is its flora and fauna, although the failing station and its biodomes are certainly cleverly designed. Plants and animals are each designed with multiple states – anger, fear, alert, resting, and more; with many of them interacting with each other in different ways. This means that where a heaving, deadly rhinoceros creature might block your path, you could deploy a small bug the creature fears in order to gain passage. 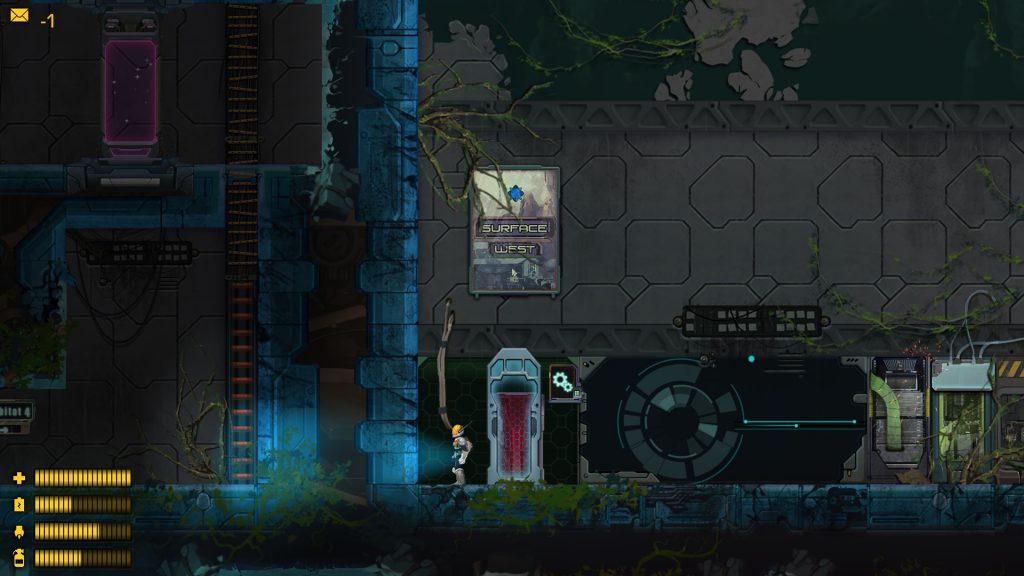 That’s not the only way, that said, as your trusty camera will no-doubt reveal. But fear is an entirely viable method to pass the beasty. You could also gain their attention, causing them to charge at you, miss, and knock themselves unconscious. Or, you could use the game’s adversaries, the reason you’re on your journey, the Skrillions -floating red orbs which damage, and crystallise living matter- to lock the creature in a crystalline stasis.

What is important to remember though is that these methods are all non-violent. Sure, you can also lob explosive mines -frozen, stunned creatures that you can discover with some luck- at the enemy, killing the poor beast, but when you can discover something as silly, and satisfying as dropping a bug you’ve frozen, to startle the creature… after that, why-ever would you set out to maim and wound these creatures that are simply trying to exist within their ecosystem? This is really the message that the game celebrates, that gives off the best self of accomplishment; brain over brawn.

It’s an idea the developer has been working on for the past six years. Omni-Labs’ Rudolf Kremers, explained to me that this means it predates the more accessible, pre-fab engines which dominate the modern landscape. Meaning that the game was entirely hand-coded from scratch – this is telling at times, both in strengths -quick loading, zero movement latency- and weakness -angular hit-box allowing for character to hover off ledges if carefully manoeuvred. 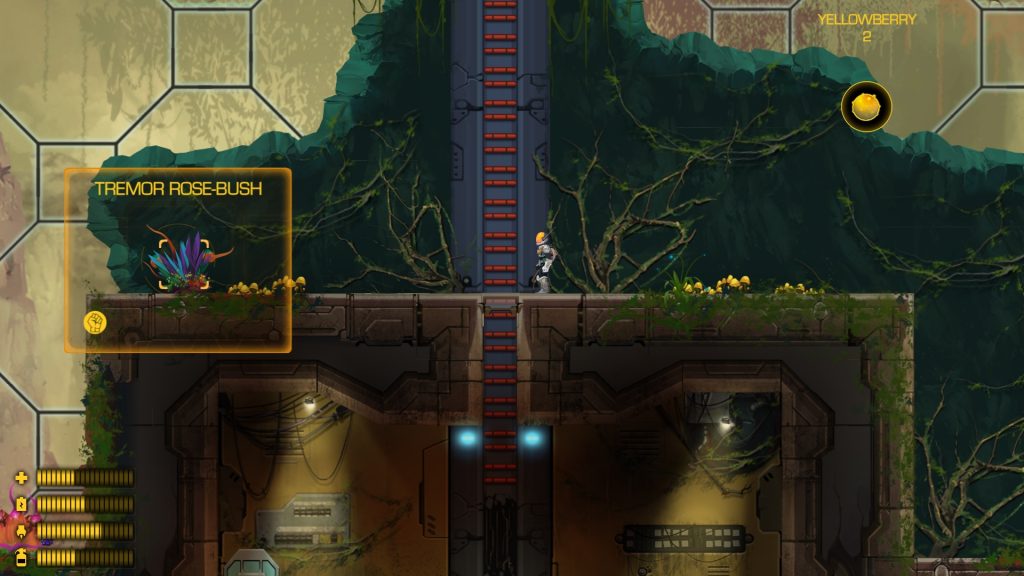 It’s a game with an exceptional depth; I played about an hour of the game overall, and was shown several points further in the game to show how the game’s mechanic’s stack up. Reminders stack up as side-quests in the game’s menu system, over 20 accrued at one point; similarly the game has an encyclopedia for the creatures and plants that dominate it’s map. Each populated by snapping pictures -in a manner not dissimilar to Bioshock- while they are in various states. Take a photo of that Rhino-creature I mentioned earlier while it’s resting and you may get a clue at what it is scared of, take a picture of it scared and the encyclopedia will advise you further on its nature.

A save game that was loaded from near the end of the game showcased a map vaster than any I’ve seen in a metroidvania, and featured an inventory rammed with about 15 different throwable items -ranging from berries to frozen creatures. The character had gone through several upgrades, with a vastly improved jetpack than the one I had found cast aside in a lab side-room, and gameplay was increasingly reliant on the various creatures which populated the world. Rudolf deployed a few explosive frogs which knocked out a lethal creature that would have otherwise blocked my path, he then used the character’s extinguisher to break a Skrillion crystal, releasing the area from their stasis, but also accidentally unleashing a dozen of the creatures. Quickly throwing a few lizards into their path, however, gave him time to get away, and gave them easier targets to freeze. Returning a moment later and the Skrillions were gone, absorbed into the -now frozen- lizards. 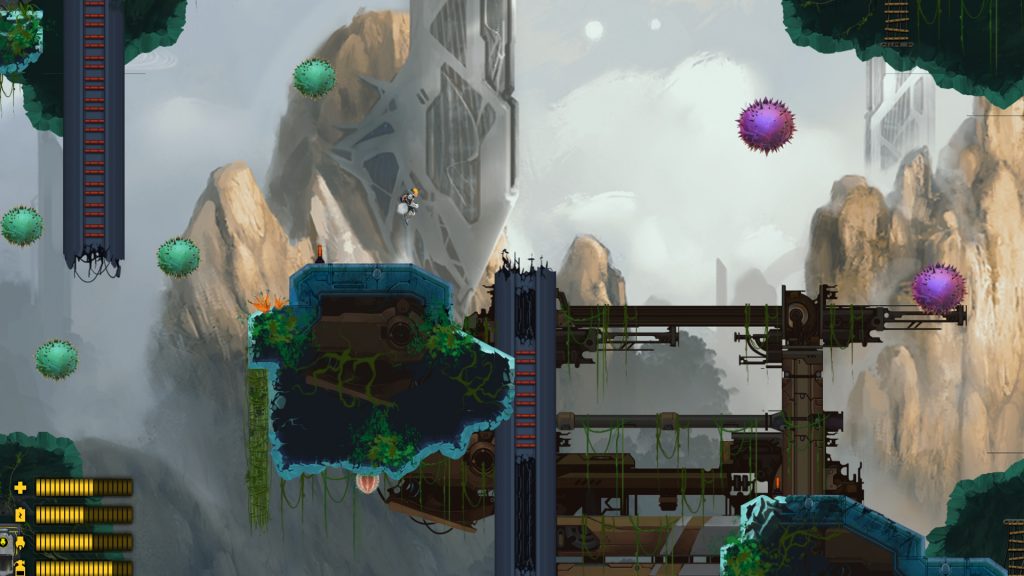 There is, just from what little of the game that I saw, at least half a dozen different ways that could have been handled, and that’s before we even get to more elaborate methods like leading enemies across the map, or setting up traps for the trappers.

What is worth mentioning as well is that while the game -as I hope is obvious from what I’ve said- massively encourages experimentation, it doesn’t limit your path should you continually fail. Refills for your extinguisher and jetpack are unlimited, and littered around the maps liberally; and while the creatures persist between screens there’s plenty of bugs and plants which continue growing, and keep being born; meaning that even if you do manage to render several species extinct with your playfulness, there’s always a mass which are reliably renewable.

If you’re a fan of practical problem solving, or metroidvanias, then Starlit Colony is definitely one to watch.

Starlit Colony is set to release on Xbox One, PS4, and PC later this year.