My review for Mandala was originally taken on alongside a number of other two-player games, with the intention of including it in a piece about games that cater specifically for couples. Somehow, though, the suffocatingly thematic language in the instruction manual made this incredibly simple game seem incredibly complex and so, I’m much later with this piece than I had hoped to be.

When I talk about theme in board games, you’ll usually find me able to get incredibly passionate about almost anything — from rainclouds in Petrichor to the fashion industry in Pret-a-Porter. Where Mandala is concerned though, I have to draw the line. This is a purely abstract game in which the players engage in a clever, highly competitive form of set collection, dressed up as though they were building and destroying mandalas. 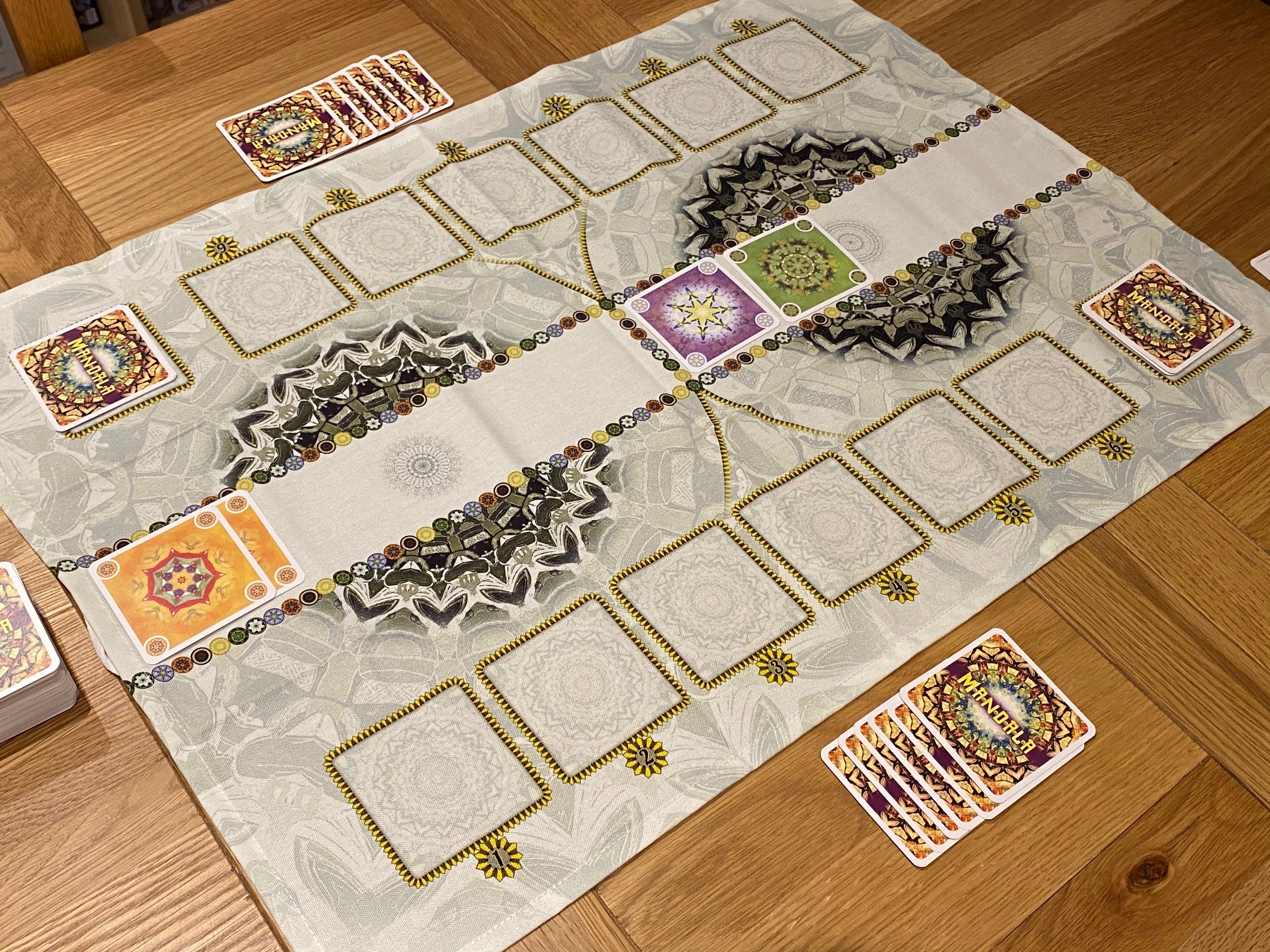 Linked to the mandala theme are concepts of The River, The Field, The Mountain and The Cup, each of which are represented by areas on the board (which is actually a piece of cloth, but I’ll get onto that in a bit.) The players will take turns to place cards in one of the six colours into either mandala in either of the Field spaces or into the shared Mountain area.

Before I go on, let me talk about the board —or cloth —or whatever. This rather attractive thing includes printed artwork featuring a mandala design on each of the left and right-hand sides. Across the middle of both of the mandalas runs a pair of lines just wide enough to fit cards into —this line represents The Mountain. Above and below each mandala (so that there is one facing each player) is a set of markings denoting each player’s Field.

The key thing to note here is that the Mountain on each mandala is a shared space, whilst each mandala has two Fields —one exclusively for use by each player. Also on each player side is a River —a series of spaces numbered from one to six —and a Cup; a single space on the extreme right-hand corner. 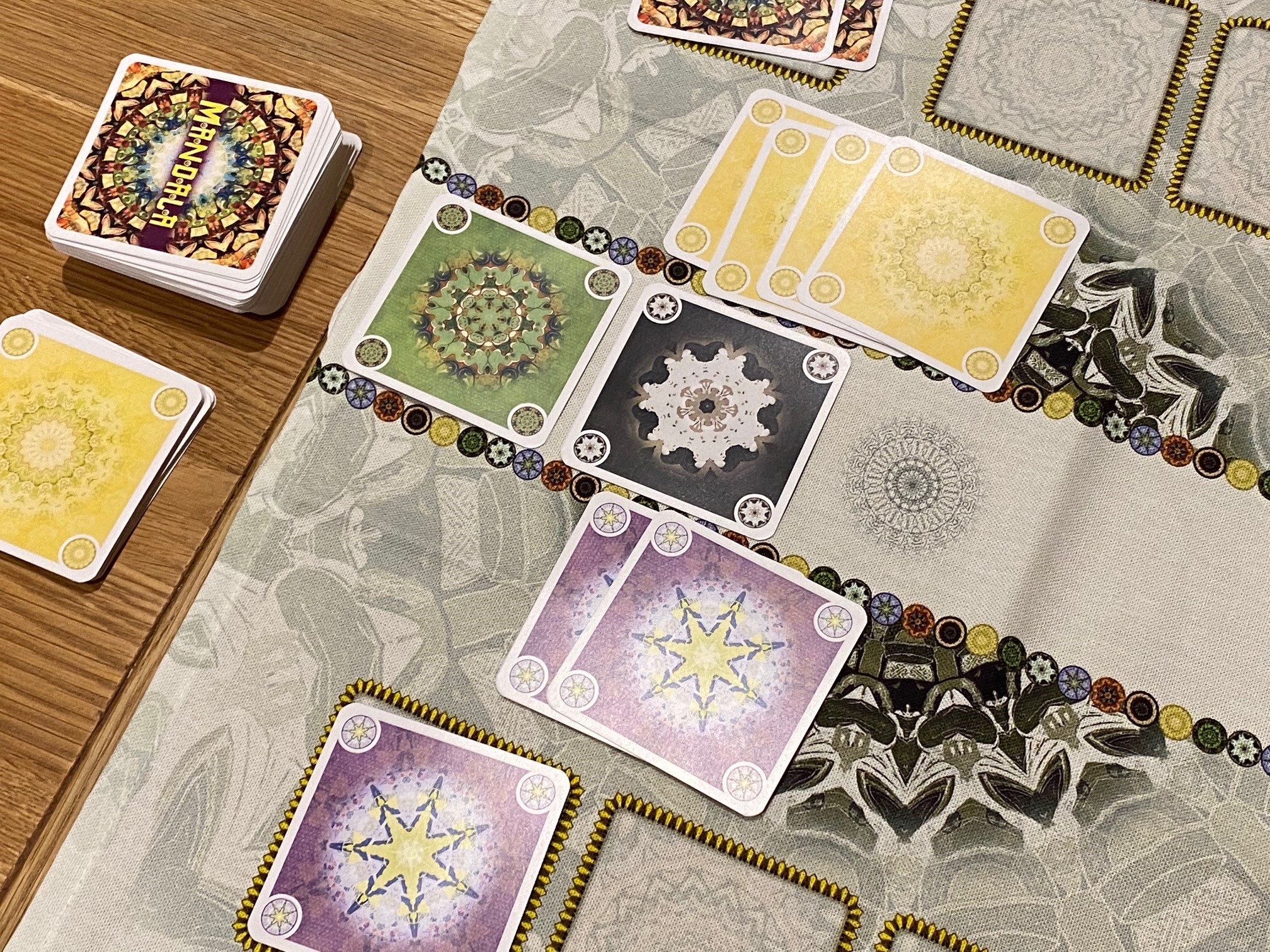 So, as I mentioned earlier, each mandala will be “built” by the players placing cards from their hand of up to eight into either their own Field or the Mountain. On their turn, a player can place as many cards of the same colour as they want into their Field, or they may place just one into the Mountain. The key thing is, that each of the six card colours can only exist once in the mandala —so if green is already in the opposing Field or on the Mountain, then a player cannot add green to their field.

When a mandala has all six card colours placed in it, it must be broken. The players compare the total number of cards (of all colours) in their own Field, and whoever has the most may take all cards of any one colour from the Mountain in the same Mandala. The other player then takes all cards of another colour, and so on until no cards remain in The Mountain. All cards in both fields are discarded.

The players must then place the cards they earned this way into their River and their Cup. To do this, players first look at their River —if they have taken cards in a colour that does not already feature in their River, then the first card of that colour must be placed in the lowest numbered, unoccupied space in the River. Any excess cards in this colour (or any cards taken in a colour that is already in the River) will go directly into the Cup. 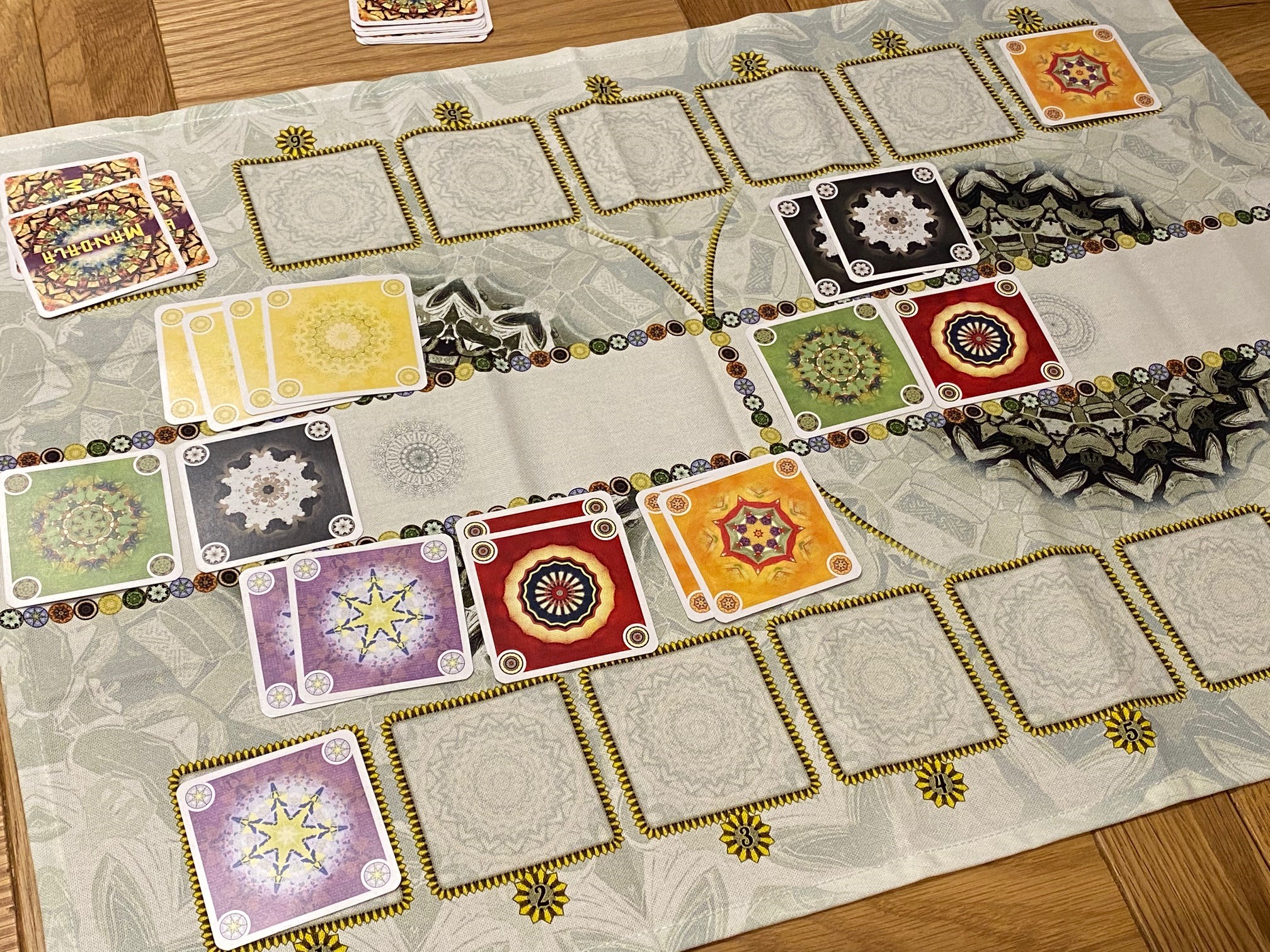 And so, here we have this incredibly elaborate way of explaining what is actually a simple but fiendishly clever way of creating a dynamic and highly variable head to head experience. I would have been much happier if the designers had somehow found a way to describe the game in layman’s terms, given that the mandala theme is really quite a periphery to the experience itself.

Even with that said, I’m disappointed with myself —ashamed even —not to have played Mandala sooner, because the gameplay is just sublime. The two players not only have total visibility of everything that is happening in the game (except what is in their opponent’s Cup) but they are also crafting it. You can —and will —literally build your own scoring conditions.

The only factor that affects this (and it is minimal thanks to the large hand size) is the luck of the draw. Cards taken from the Mountain early are always placed in the lowest open space in the River, so it can be difficult to set yourself up to ensure that your high scoring cards come late on. One thing that mitigates this is the fact that two cards are placed in each Cup during setup, giving you something to aim for in terms of late-game River building.

When I first imagined how Mandala would play whilst reading the rules, I saw it being quite a high scoring game, with players able to freely determine which cards go into their River and Cup. What I hadn’t considered in this reckoning until I played the game was how critical strategic hate-drafting (hobbyist language for taking cards just to spite your opponent) would be.

Because Mandala is strictly a two-player game, by the mid to late game, each player will have plain sight of what their opponent is after. Players getting themselves into a position to choose to take cards worth say four or five points to the opponent, rather than taking a card or two that might score one or two for themselves is critical. Hate-drafting Mandala is as critical as scoring for yourself and as my wife and I got better at the game, our scores actually fell from game to game. 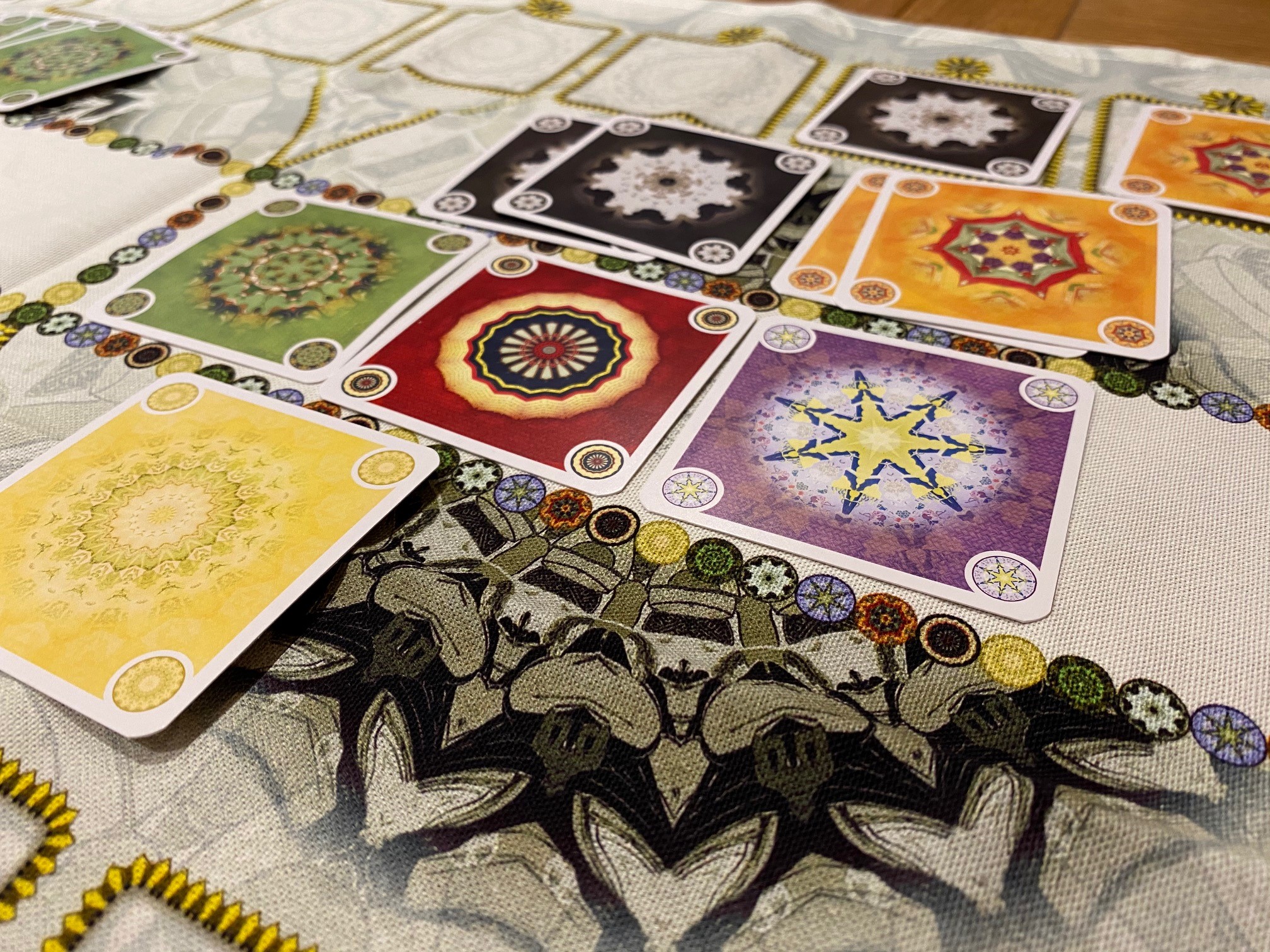 So, with my apologies for the lateness of this review having already been given —and hopefully accepted, let me make amends. Mandala is one of the most unique games that I’ve played in a long time, and this is made all the more impressive by it being a strictly two-player experience. The cloth board and beautifully designed cards give it an attractive, understated look that is just as unique as the gameplay, whilst the small box and low price tag ice an already delicious cake.

As long as you have the chance to play with just one other person on an even slightly regular basis, then I urge you to consider picking up a copy of Mandala, or at least find a way to give it a go. Reviewing Mandala has been a standout experience for me and despite it having what I would consider a hugely unnecessary amount of complex thematic text that muddies its clever mechanics, it will remain a solid favourite for some time to come.

You can purchase Mandala on Amazon.