I could think of more loveable heroine’s than the Velociraptor, yet there’s something about Bruno Cathala and Bruno Faidutti’s Raptor that invokes a primal instinct to protect, and leaves the players in no doubt about who the bad guys are. Raptor is a hand management and strategy game for exactly two players, with great miniatures and artwork by Vincent Dutrait.

In Raptor, each of the players chooses a side — either randomly or by agreement. On the one side, the titular velociraptor must shepherd at least three of her five babies off the board, whilst simultaneously avoiding being put to sleep by her human foe. On the other, human side, the player acts as a team of scientists looking to capture three baby raptors, or to incapacitate the mother. 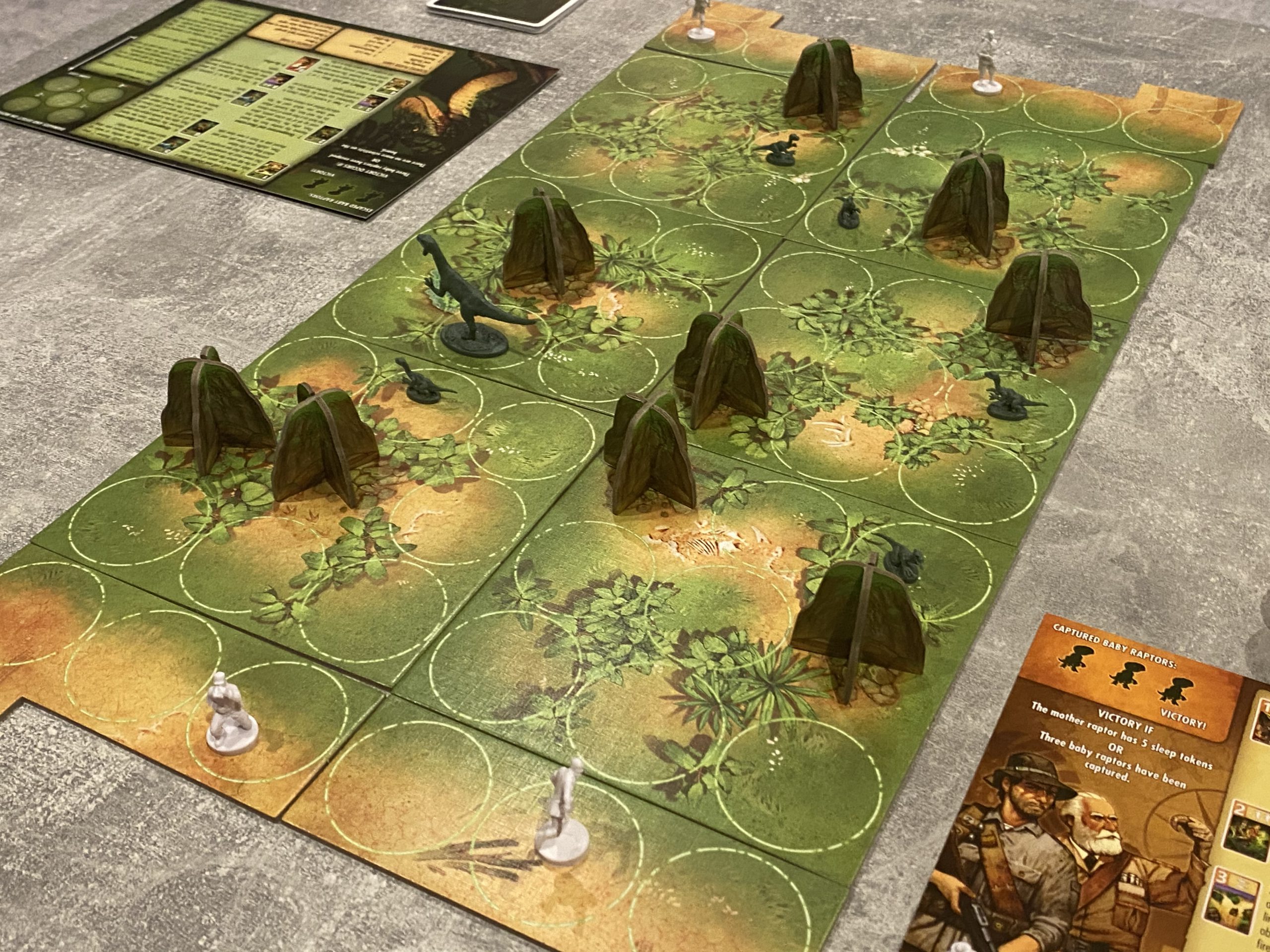 These two sides — literally and thematically — could not be more different. The only similarity between them is that each is driven by a deck of nine cards, with the players each using one card per round to decide what they will do. These cards show both a specific action and a number, and whoever plays the lower number will take the action (and ignore the number) and the player who uses the higher number will take “standard actions” equal to the difference between the cards shown on both players’ cards.

As an example, if the human player plays their number one card and the raptor player plays their number five, then the human player will take the card action, and the raptor player will take regular actions equivalent to the difference between one and five. In this case, the human number one card allows one raptor to be shot with a sleep dart and then to reshuffle their deck, whilst the raptor’s “regular” actions include moving, knocking out a scientist or killing one that is already down. 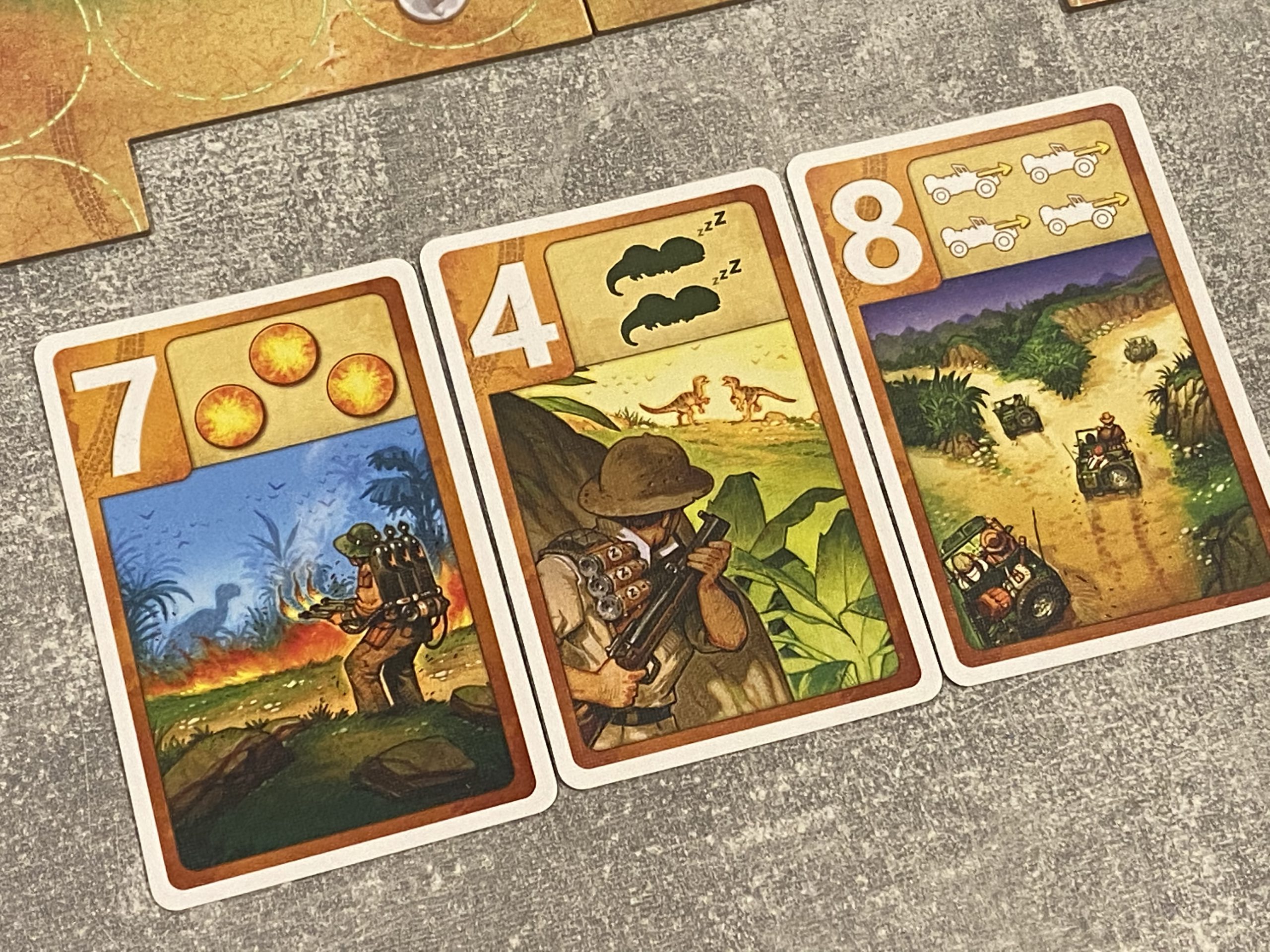 Because each side plays their card at the same time and the difference between the two has consequences, then it’s fair to say that second guessing what your opponent might want to do becomes a key strategy. Regular actions are perhaps slightly less powerful than card actions, but if a player ever gets eight (the maximum difference between one and nine) then that will result in a huge momentum shift. 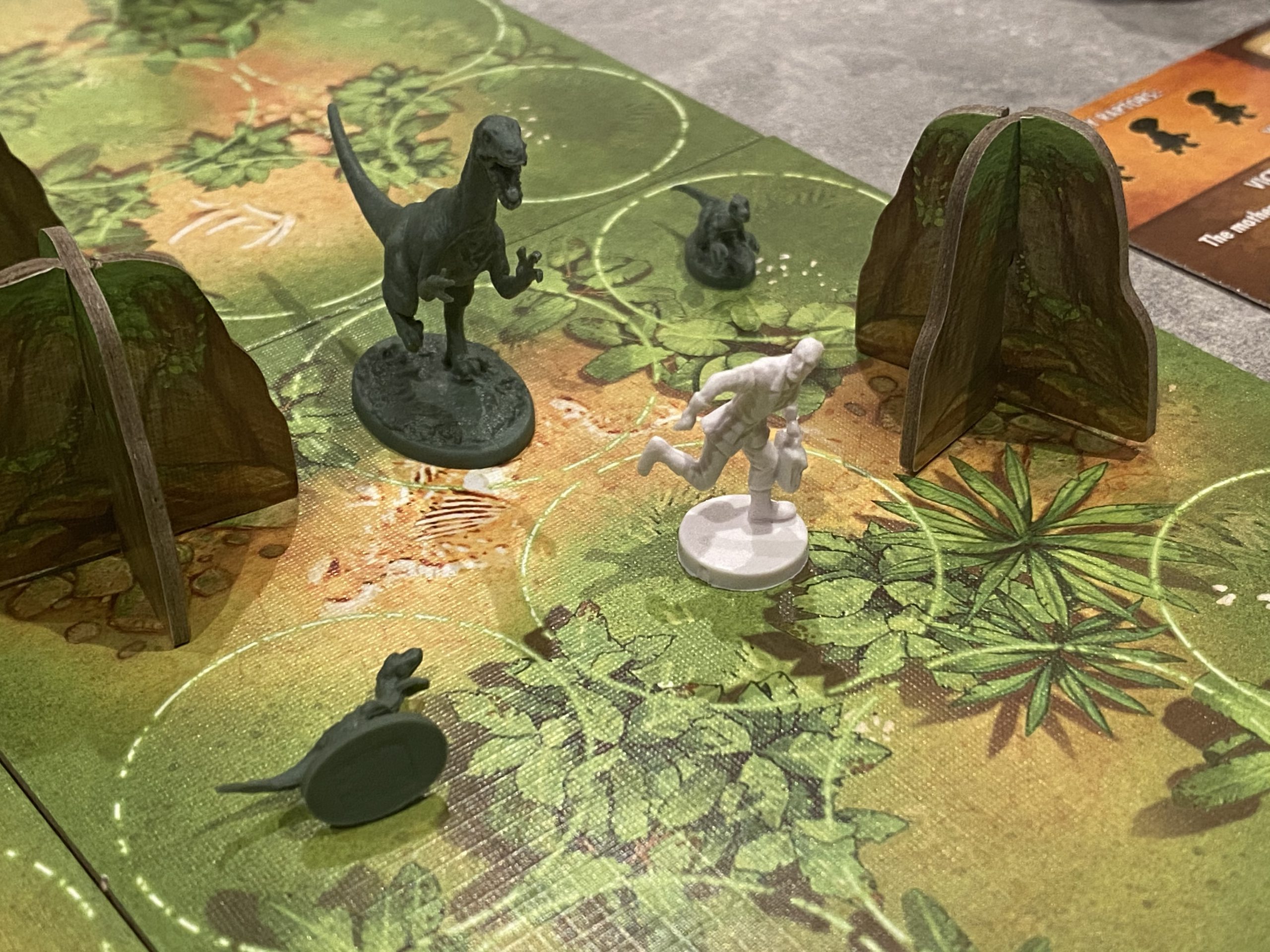 The ideal setup for the raptor is to ensure that scientists can’t make a line of sight to either the mother raptor or any of the babies, and this is usually possible for about four to five of the six miniatures. With the setup done, the mother raptor will be aiming to guide at least three babies to edge tiles, whilst as I mentioned above, the scientists will aim to neutralise and capture the same babies — or the mother.

In terms of gameplay, playing as the raptor side is much harder, and should be left to the more experienced player. The scientists can call on reinforcements as the game progresses, and there can (although it’s unlikely) be up to ten scientists on the board at any time. Scientists have ranged tranquiliser weapons and can use fire tokens to control the direction of the raptors, although oddly, the mother raptor can use her actions to put out these fires. 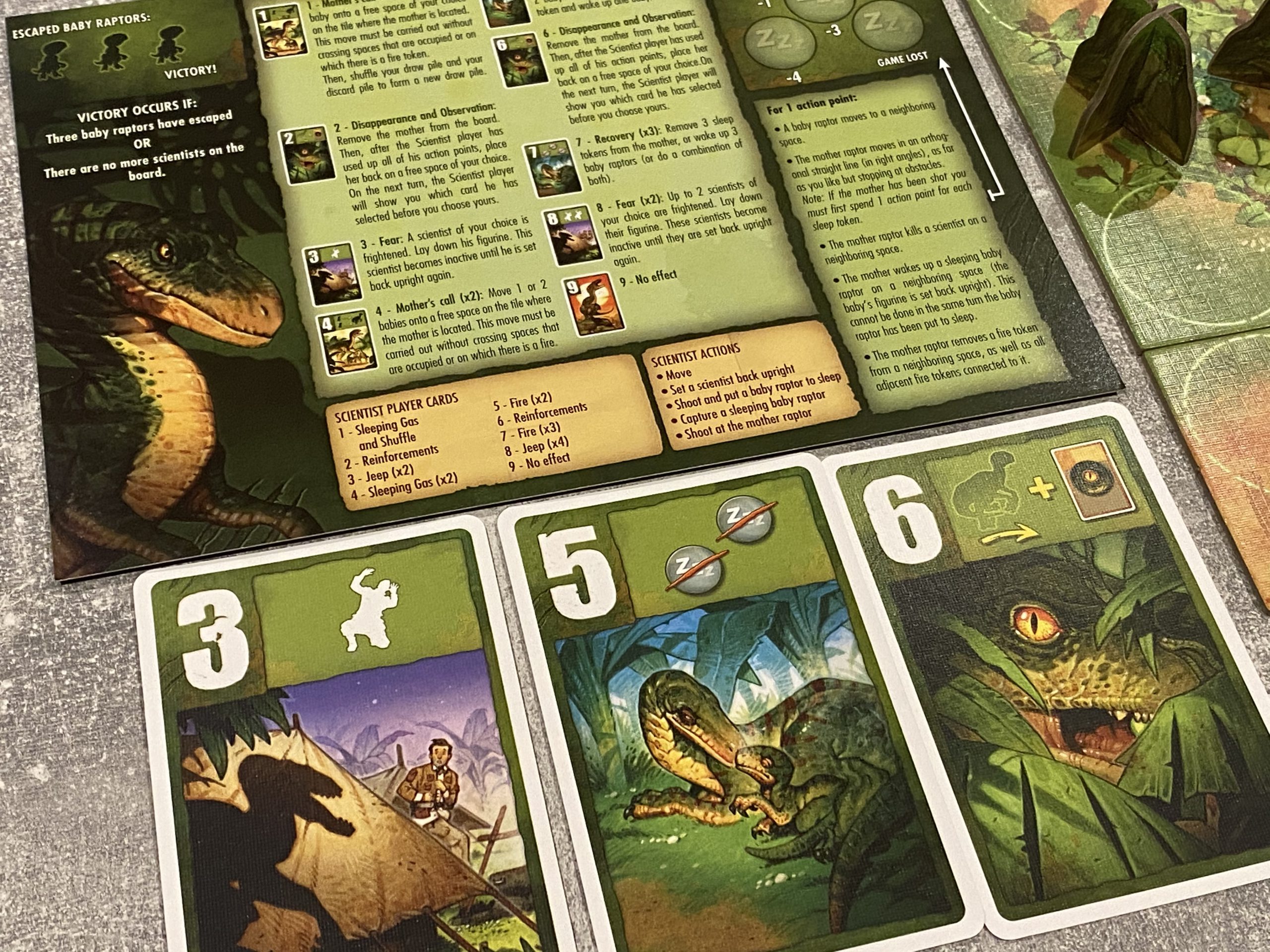 Gameplay for the scientists tends to focus on isolating and capturing individual baby raptors that the mother can’t reach — she’s fast, but she can’t be everywhere at once. Fire helps them achieve this, as does their ability to shoot at any raptor they can make a line of sight to — even if the scientist models only move one space at a time to get into position.

On the other side, the mother raptor can hide (making her impossible to target) and can move any distance in a straight line on her turn. She can attack scientists in melee, and if she is able to generate a turn with say three or four actions, she will likely be able to get to at least one scientist and at least down them. She can also put out fires and knock out tranquiliser darts. The baby raptors can move, but are otherwise defenceless. 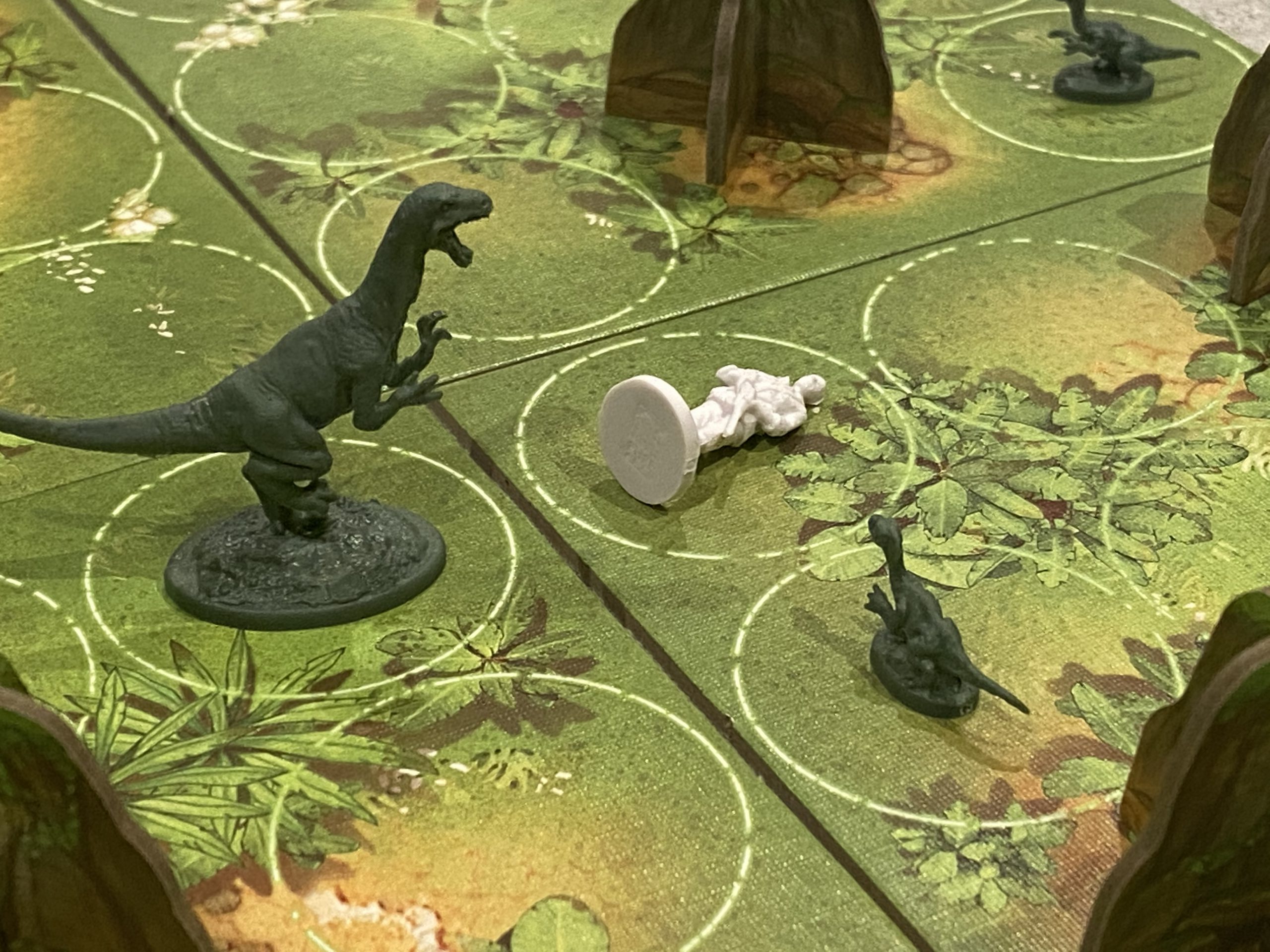 Playing as the raptor side feels genuinely harrowing, with a high likelihood that you’ll lose at least two babies, and frankly, a better than average chance that you’ll lose the game. The human scientists have numbers and weapons at their disposal, and it’s easier for them to take a defensive stance and to patrol the edges of the board with at least a few of their models. Luckily, reinforcements arrive at the board edges rather than ends, so if the raptor is close to escape, this is rarely stopped by a “lucky” reinforcement card.

I also found playing as the humans surprisingly distasteful, which I think is a really good reflection of how well the theme works. I’m not a huge conversationalist, but I do regularly take time to note the damage we do to the planet. I appreciate that raptors have long since been extinct, but in this game you’re made to feel like humans are nasty, manipulative creatures and there’s no doubt that the raptor is the good guy (or girl) who is simply out to protect her young. 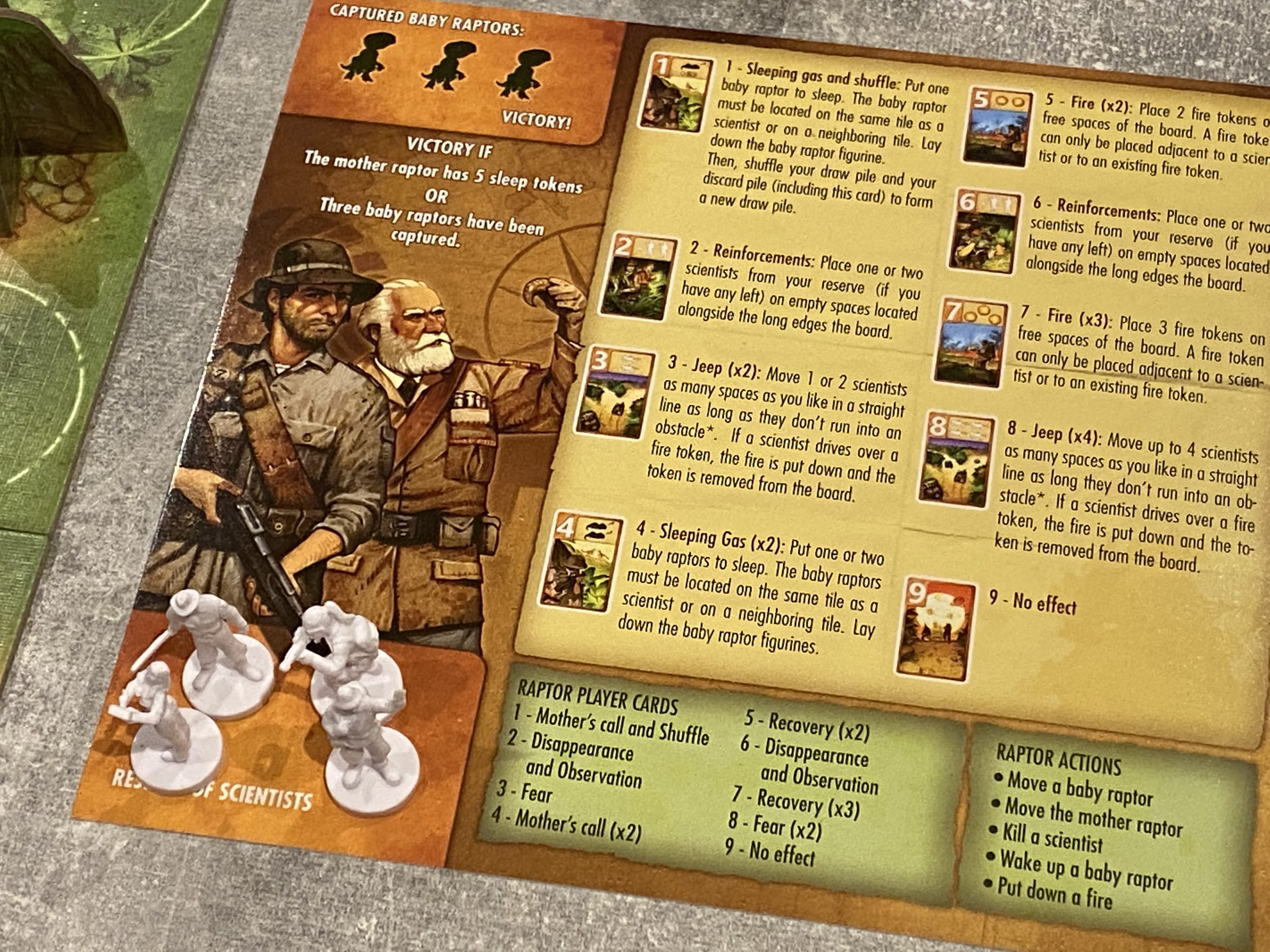 Raptor comes in a small, tidy box with good board components, nice three-dimensional obstacles and small but very detailed miniatures that give it excellent table presence. The instructions are clear, and the inclusion of a player aid for both sides is very, very helpful. I also like the card art, which is again clear and easy to follow, as well as quite evocative in terms of the scenes it depicts.

I find Raptor to be quite a unique and interesting entry into my catalogue of two-player games, and whilst it’s not my outright favourite because of the slight imbalance, and the “unpleasantness” of playing as the humans, it’s definitely a keeper. This is partly because it looks great when set up, but also because it’s easy to teach, quite strategic, and because the card play mechanic is so interesting. Overall, a really nice little game.

You can purchase Raptor on Amazon.