When it comes to big experiences, Kahuna’s small box is solid but a little lacking

Continuing our recent run of two player only games, Kahuna is a small box standalone game from publisher Kosmos and designer Gunter Cornett, in which the players act as deities vying for dominion of an archipelago in the South Pacific. Kahuna is a card play, area influence and area control game that has a thoughtful, meandering pace, but a lot of strategic depth for those who seek it out.

With a setup that involves Gods and control of an island chain, you would be forgiven for expecting Kahuna to feature some form of direct conflict, however, I don’t think the game could be more abstract if it tried. On their turn, players will simply play any number of cards (including none) from their hand, placing a single bridge token onto any link between the island shown on a card played, and a neighbouring island. 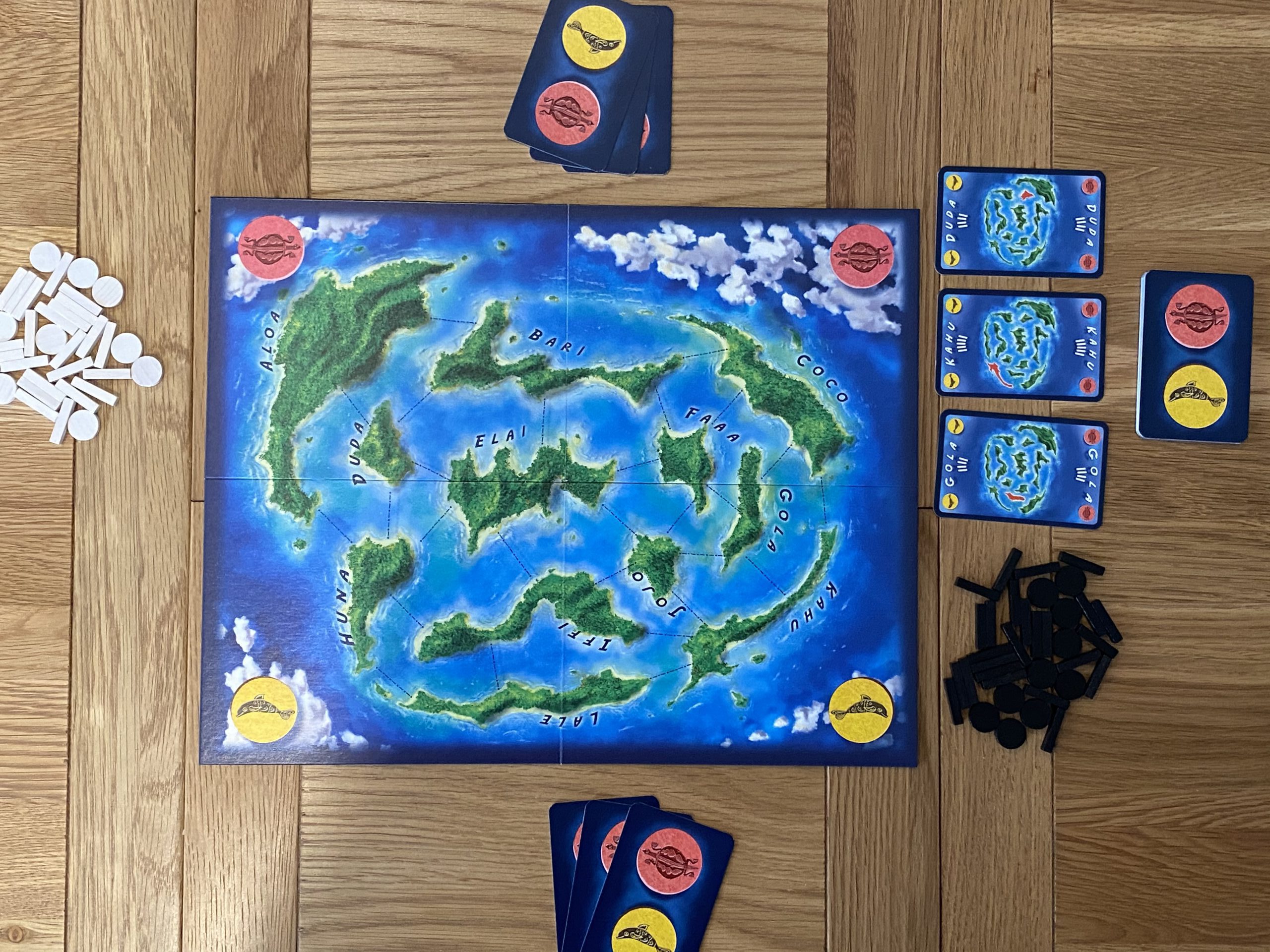 Should the placement of this bridge mean that the active player has control of more than half of the connections between any number of islands, then that player will gain control of those islands. To do this, they will simply place down a token of their colour — black, or white. If their opponent had any bridges connecting to an island that becomes “controlled” in this way, then those bridges will be removed.

Assuming that both players still have at least one bridge on the island, the active player will then draw a card (up to a hand limit of five). it’s worth remembering that I mentioned a player may choose to play no cards, in which case, their whole turn will simply be to draw a card and then pass to the other player. 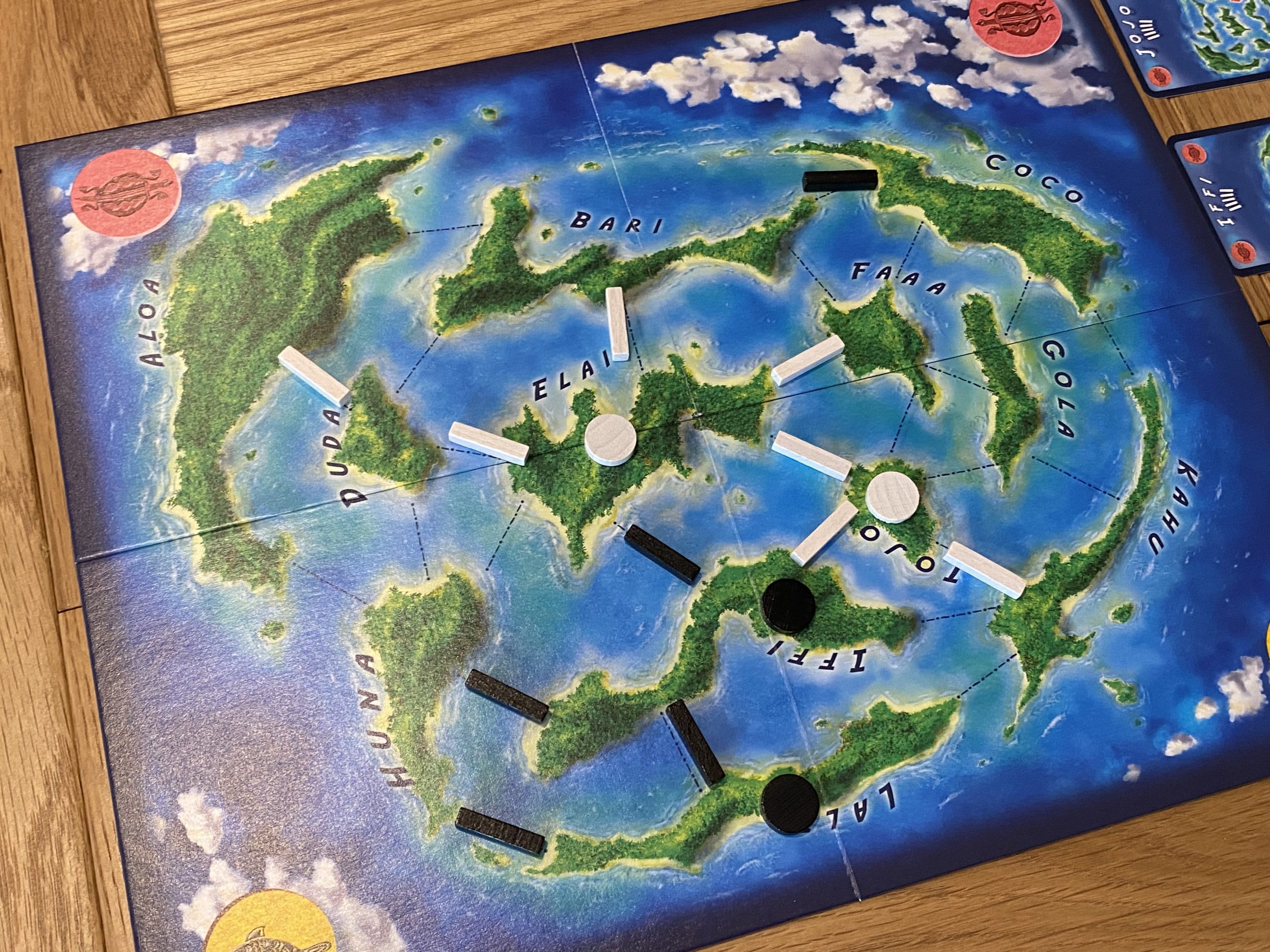 When these three scoring rounds or sequences are added up, you’ll likely have an overall winner – although draws do happen from time to time. There might be a tie-breaker in the rules, but if there is I can’t remember it, and because the score is so low and the game is only played between two, we’ve always been happy enough to accept that a draw is a fair enough outcome. 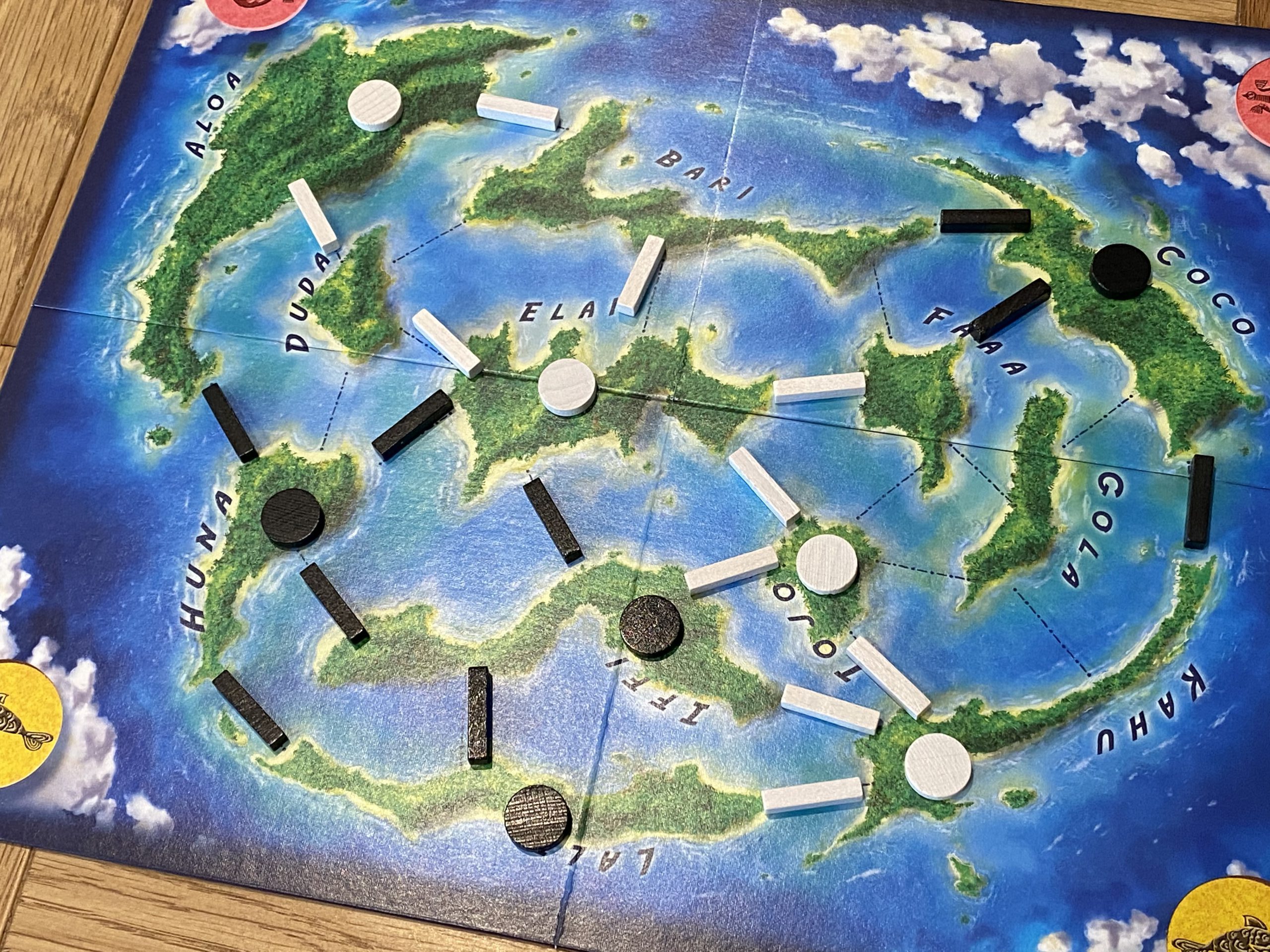 Actual gameplay in Kahuna is super simple and very straightforward to pick up, with the interest in the game coming mostly from the refinement of your strategy over the course of numerous games – often against the same person. The inclusion of simple black and white pieces against such a bright, attractive board seems odd at first, but it ultimately serves to remind us of classic head to head games like Chess and Draughts.

I found that this classic setup helped in bringing at least one “wary” non-gamer to the table, which is a first for me and this person, who has otherwise resisted all my efforts to get them to play a so-called “modern” board game to date. Personally, I think I’d have preferred the black and white wooden pieces to be more in keeping with the board and card art which is brighter and more whimsical, but this is a minor concern about a game that is clean, compact and well made overall. 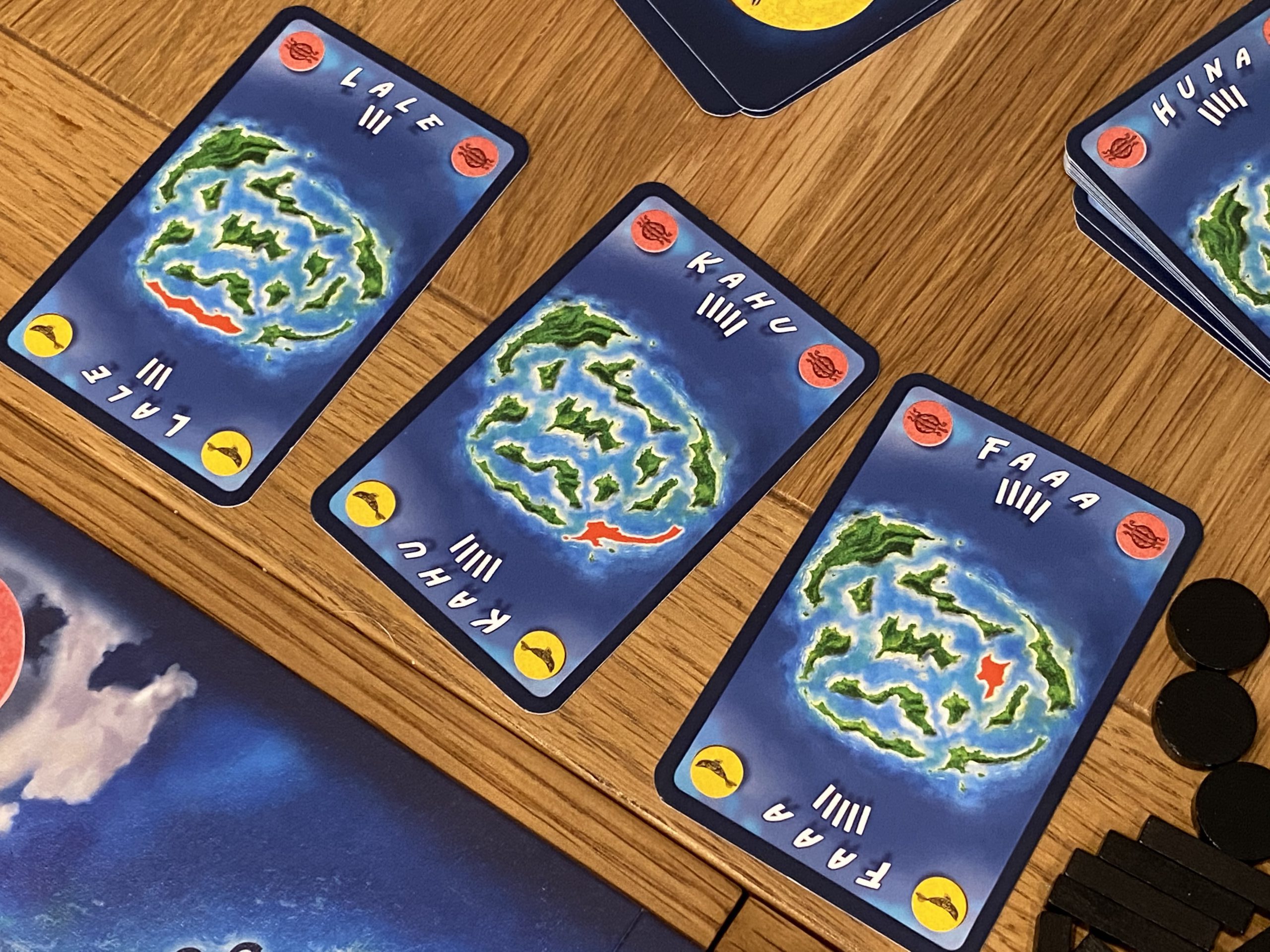 Even if those first few turns are easy to teach, Kahuna demands strategic thinking over at least a medium term. It’s no coincidence that players may choose to play any number of cards, and a big part of Kahuna is in setting up chain reactions so that when you do drop maybe three cards, you can flip control of several islands at once.

The sweetest (but oh so rare) victory in Kahuna can be found by removing your opponents last bridge, causing them to lose the game right away. You’ll only ever do this if they focus on a small number of islands and you manage your hand very thoughtfully, but it’s a threat that adds a little bit of jeopardy that doesn’t exist elsewhere in the game. 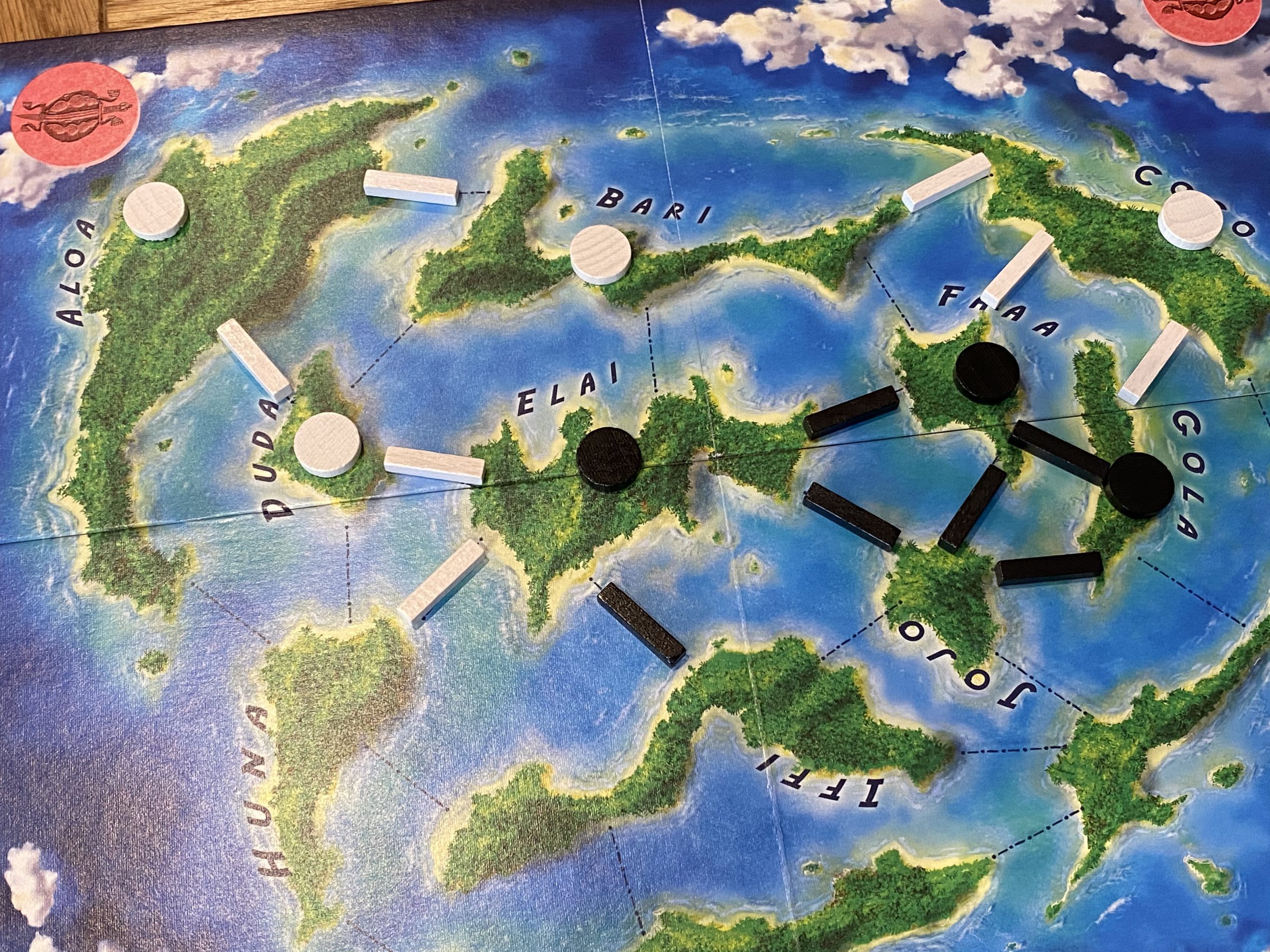 If there is a problem with Kahuna, it’s that it is a little underwhelming. It’s a smart game that uses minimal rules and components to offer a lot of depth and it is hugely variable from game to game, but somehow, it fails to excite. This may simply be because both myself and those I played it with felt little connection to the theme (which is entirely painted on) or it might be because we’re not that into abstract games, but either way, it didn’t have the “one more game” factor for me, my wife or the others I tested it with.

Despite this, I do think there’s a good game here that perhaps just wasn’t for us. The small box mated with a low price and good components mean that Kahuna isn’t much of a risk if you do decide to try it, and it does definitely work exceptionally well as a highly variable and replayable alternative to more traditional games at two players.

You can purchase Kahuna on Amazon.