Although the number of ‘properly considered’ digital board games is increasing, the majority of modern games that make the leap from wood and cardboard to pixels and bits are only the most accessible gateway games like Settlers of Catan or Ticket to Ride. Lately though, more and more of the most popular mid-weight games have begun to make their way onto Steam, iOS and Android, with one such game being Wizards of the Coast’s Lords of Waterdeep. This particular conversion is from Playdek, who have already released digital versions of GMT Games classic Twilight Struggle and Uwe Rosenberg’s Agricola, which gives them exceptional pedigree.

My experience with the digital version of Lords of Waterdeep was entirely on Steam, however I should point out that it’s also available on iOS and I have no reason to believe that it will be materially different, except for from a control perspective. With this version of Lords of Waterdeep, Playdek have remained absolutely faithful to the original — this isn’t a reimagining or a licensed spin off, it is a card by card, cube by cube reconstruction of the classic game. The version I have been testing includes both of the available expansions — Scoundrels of Skullport and The Undermountain. Both of these add-ons are included in a single, boxed expansion to the original board game, but it’s possible to buy them separately in the Steam version. 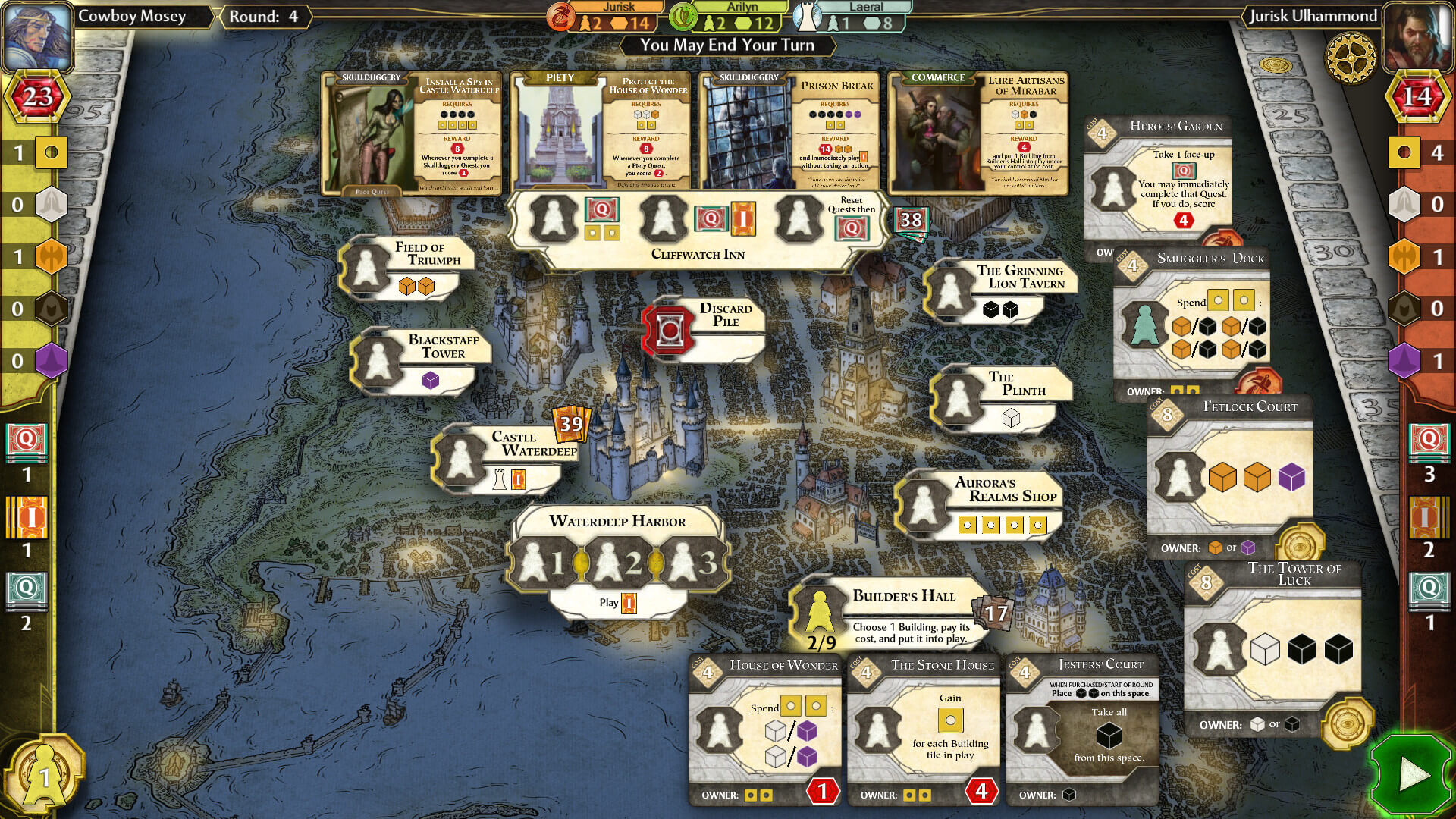 In producing this review I’ve played more than one hundred games of Waterdeep on Steam, probably about seventy five percent of which were completed in the offline mode against various flavours of AI difficulty. In the physical realm I’ve played Waterdeep perhaps five or six times, but across all of those games, I’d say less than ten percent featured the base game without its expansions. Simply put, if everything in this review sounds appealing to you and you choose to invest in Waterdeep then I think you should purchase the expansions immediately. Neither of them add much by way of complexity, but the additional quests, the more varied worker placement locations and the introduction of corruption are essential for maximising enjoyment from the base game.

With that said, let’s get into detail about what Waterdeep is all about. Firstly, it’s a two to six player game (when you add in the expansion) and whilst both the original board game and the online digital version play best at around four players due to the time each turn takes, I think single player mode at six players is a lot of fun as well — in fact that’s where I’ve spent most of my time. This digital version includes AI opponents with easy, medium or hard levels, and any experienced board gamer could probably start at the medium and quickly graduate to the hardest setting. My win rate is still fairly high, so I suppose my first minor criticism is that Waterdeep could be a little tougher, but then again, if it was, I’d likely be complaining that it cheats (which is true of many digital board games — but not this one.) 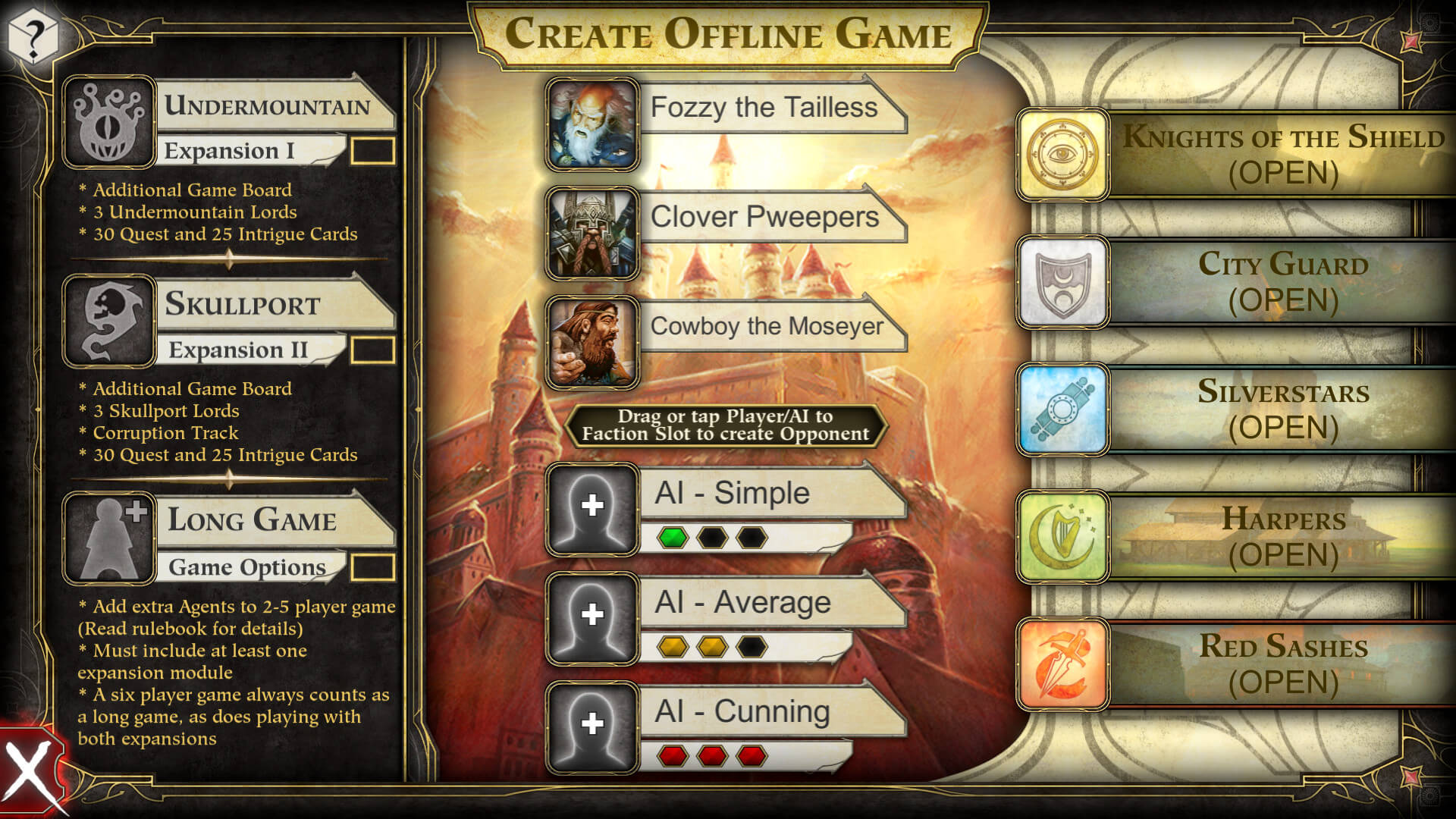 In any case, the aim of Waterdeep is to score the most victory points. This is achieved through what is commonly known in the board game community as worker placement, which results in gathering cubes that are then converted to fulfill quests. Thematically, the players each control the head of a secret cabal and each have their own secret goal which is assigned to them at the beginning of the game via a hidden card. The cubes are not simply cubes, they are wizards, fighters, monks and other inhabitants of the titular city. The secret player cards will confer bonus points for completing quests of certain categories, but since it’s usually impossible to tell who has which card there’s always an element of tension when close games come to an end.

On that note, Waterdeep is fairly unusual for a worker placement game in that it can take place over either six, or eight, rounds, effectively creating a short and a long version. If using the expansions, then the game is limited to the long version which takes about an hour to play against the AI and is closer to two hours when played with a full quota of online opponents. The gameplay is mechanically very simple, but the replay value of Waterdeep is high thanks to how many elements are randomised and because finding the most effective way to win is always based on a pleasing mix of luck, smart tactical decisions and long term strategic thinking. 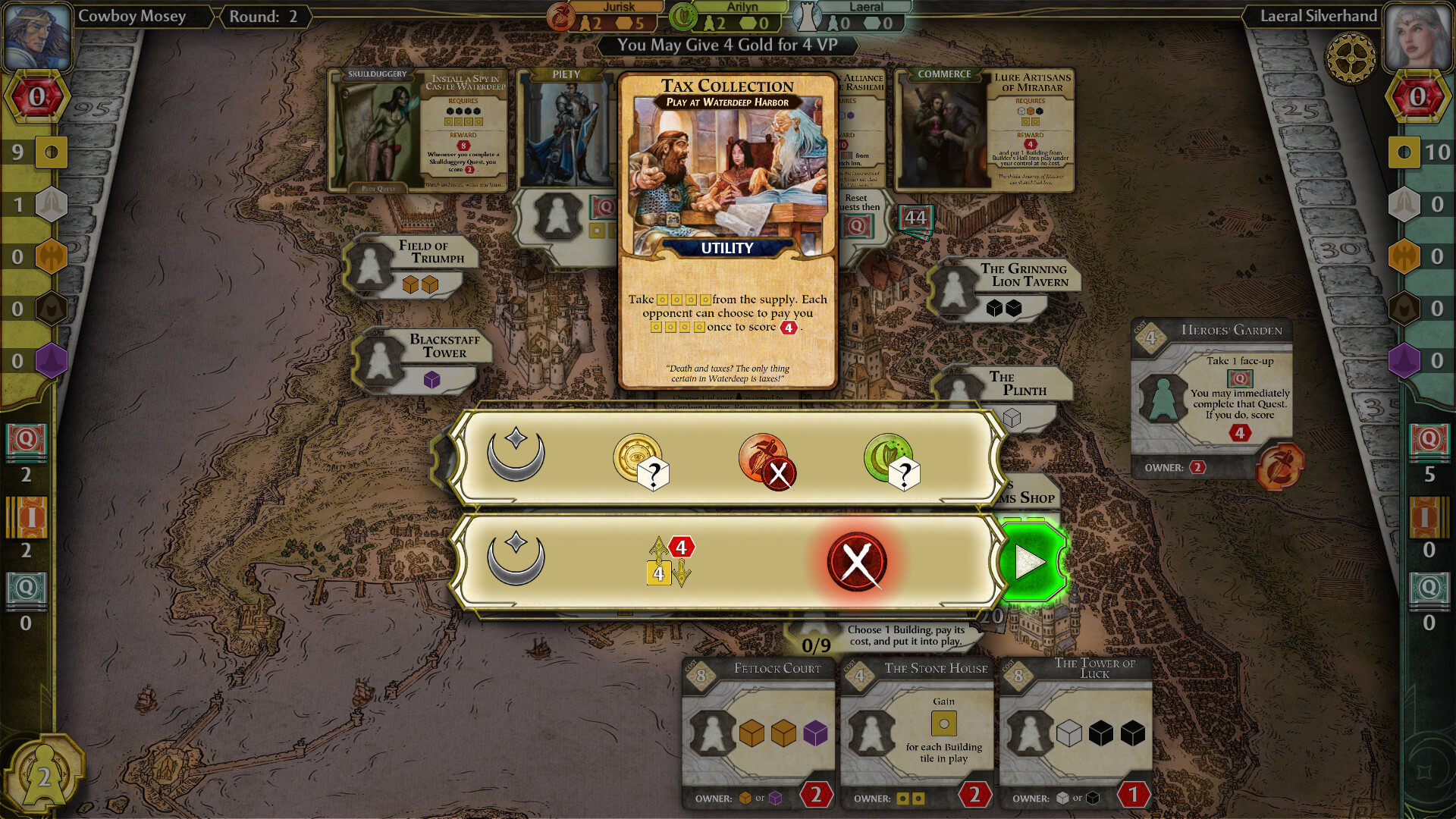 Every round is made up of two or three turns in which each player will simply place one worker and then take whatever action the space that worker was placed on allows. For example: You choose to build, in which case you take a building tile and place it on the board, then pay the cost. Other actions include taking the first player marker, collecting a quest card, picking up one or more cubes, or taking an intrigue card. Intrigue cards provide their own, mildly game breaking benefits, or can be forced onto other players in the form of mandatory quests, which slow down their game plan. In each of the first four rounds, players will do this twice before the round ends and the board is cleared, but from the fifth round, everyone receives a third worker to increase their options.

The main reason why using the expansion packs is very appealing in Waterdeep is because they increase the number of available worker placement slots and increase the number of options considerably. Scoundrels of Skullport in particular is interesting, since it adds some very powerful spaces, but when using them players will also take corruption from an associated track. The more corruption there is among all players at the end of the game, the greater the negative bonus that each one will convey, so whilst these additional spaces are powerful, they may not always be worth taking. 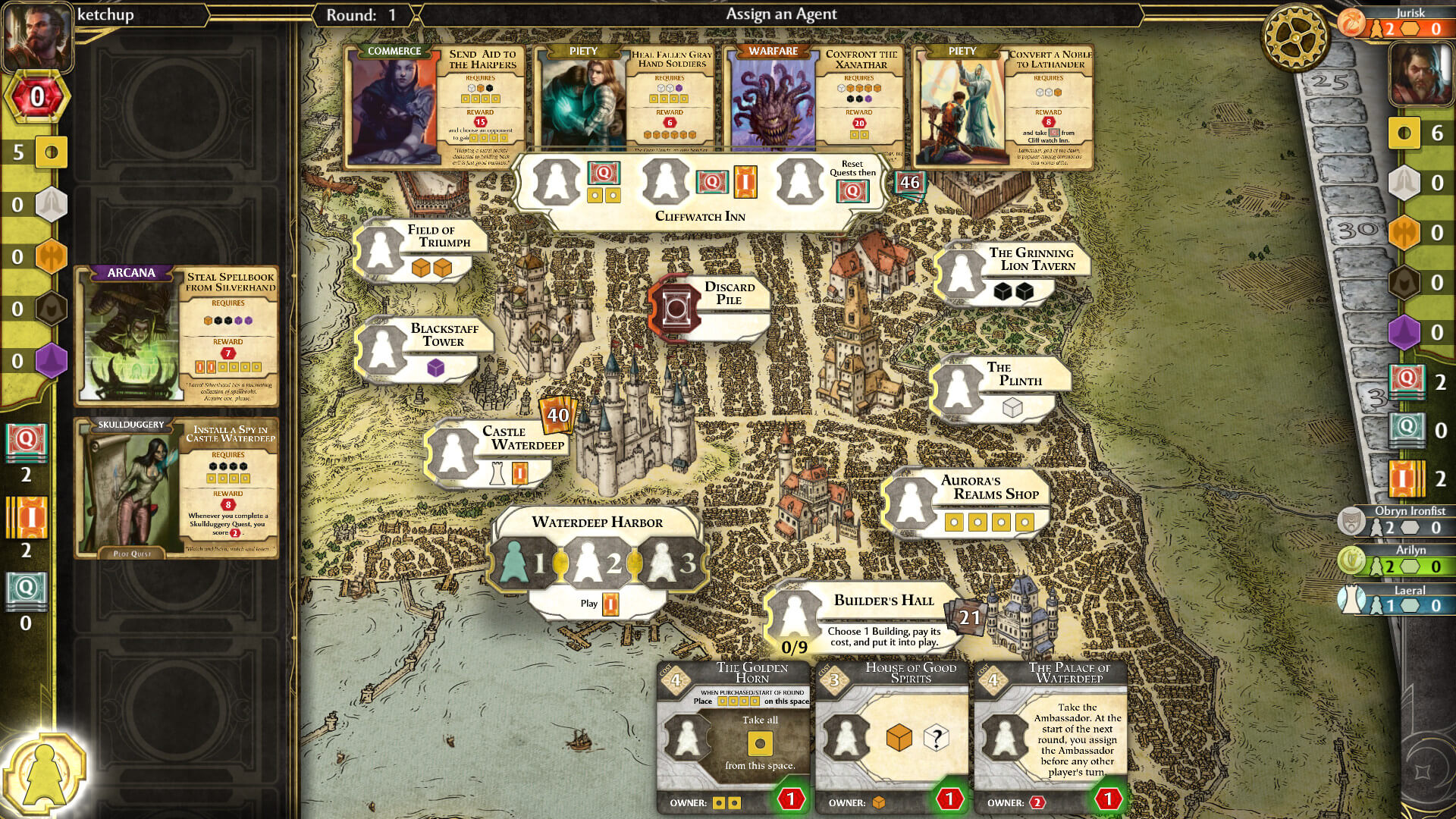 Of course, like all worker placement games, once a space in taken in Waterdeep, it is effectively locked. The real strategy behind being successful in the game is managing your worker placement actions as efficiently as possible to ensure that the quests you have in hand will be fulfilled before the end of the game. At the same time you’ll also want to consider your secret role (which will often add between twelve and twenty points at the end of a game) and, of course, your corruption. Some spaces (in particular buildings, which may or may not appear in the game) simply add victory points immediately, but taking those might result in a lesser (albeit more convenient) bonus than working towards your current quest.

Waterdeep has been a popular board game since its release in 2013 and much has been written about it as a game already, but how does this digital version hold up technically? My experience with it has been excellent. It shares the look of the board game almost precisely, with cards and tokens all matching the appropriate artwork, shape or style. The board is presented at a slightly tilted, top down angle and can be moved around slightly, with my only real reservation over the visuals being that in games where lots of buildings come out, it’s hard to see them all in a single view — which can result in those at the extreme top or bottom of the board being forgotten. Everything else is a nearly perfect representation of the board game, which for me is a huge plus point given that I’m a fan of Waterdeep in all its forms. 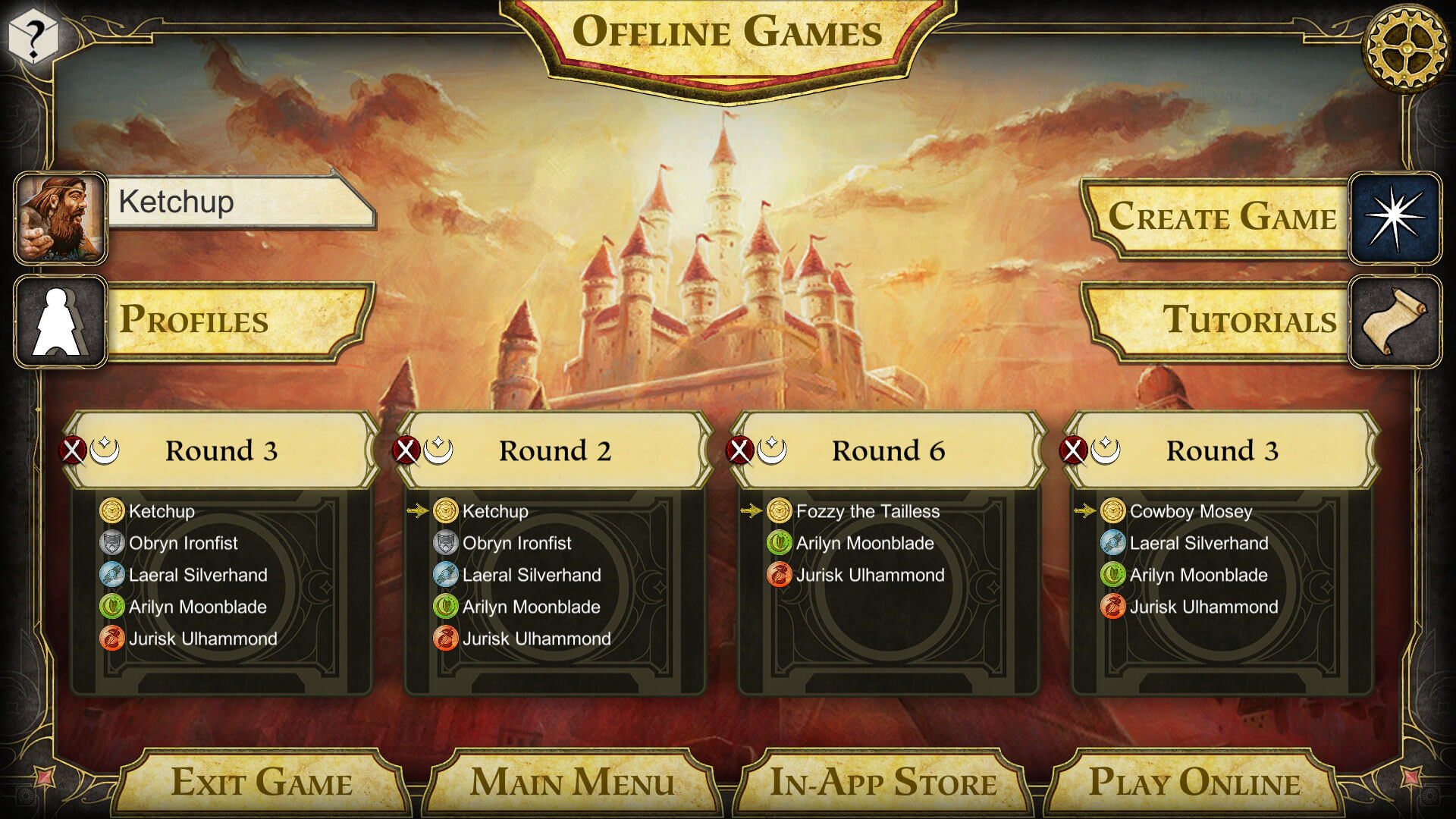 Ultimately if you’re interested in expanding your physical board game collection then Waterdeep isn’t a bad way to step up from very basic games into more complex ones. Starting with this digital version will help you understand, set-up and teach the game faster than you might otherwise be able to. You can play against three difficulty levels of AI, or against humans (who obviously come in all ability ranges) and all features and modes included in the board game can be accomodated digitally.

With all that said, I think Waterdeep on Steam is also excellent for non-board gamers who just want something more cerebral to play, perhaps a relatively low end device like a laptop. In short, there’s no-one I wouldn’t recommend this digital version of Lords of Waterdeep to — it’s an excellent conversion of a very good game, one which is already, arguably a true tabletop classic.

Waterdeep is available now on PC, Mac, iOS and Android.