Ice Cool is a dexterity- and skill-based game from Brain Games, primarily aimed at children of six years and upwards — although based on my experience, younger children can play, albeit perhaps using a more simplified set of rules. Up to four people can play, and Ice Cool is perhaps best known for winning Kinderspiel Des Jahres (Children’s Game of the Year) at the Essen games festival in 2017, as well as a number of other awards.

Ice Cool (as the name suggests) is one of the coolest-looking games I’ve seen in ages, but the board itself is much more than just a fancy prop — it’s also a very smart and efficient design choice. The bottom tray of the box is actually the largest of the classroom dioramas that you can see in the pictures, whilst the other rooms are each nested within it when stored. White wooden fish pieces (a bit like clothes pegs) are used to attach these boxes at the corners, resulting in a fairly robust and very attractive game. 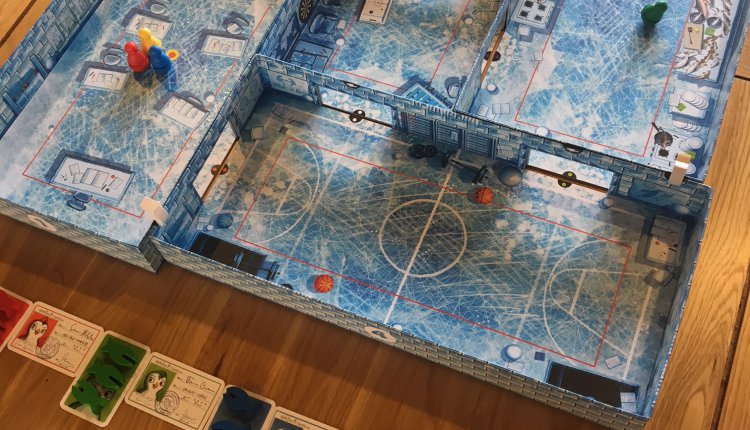 Once setup (which takes about thirty seconds) is complete, you can jump more or less directly into the action, thanks again to Ice Cool‘s built-in simplicity. Each player takes a penguin figurine, a set of three wooden fish and a couple of cards, one of which is just a cute reminder of which penguin you are using, whilst the other is a hall pass that represents your penguin’s privilege to roam the halls and collect its fish!

On that note, once everyone has chosen a penguin, all players but one will clip their coloured fish pieces over the three marked doorways. The fourth penguin doesn’t do this because they are the hall monitor for that round. Starting at the opposite end of the school diorama to the other models, this penguin needs to catch the other players by colliding with them (and revoking their hall pass) whilst, of course, the other players try to stay out of the way. 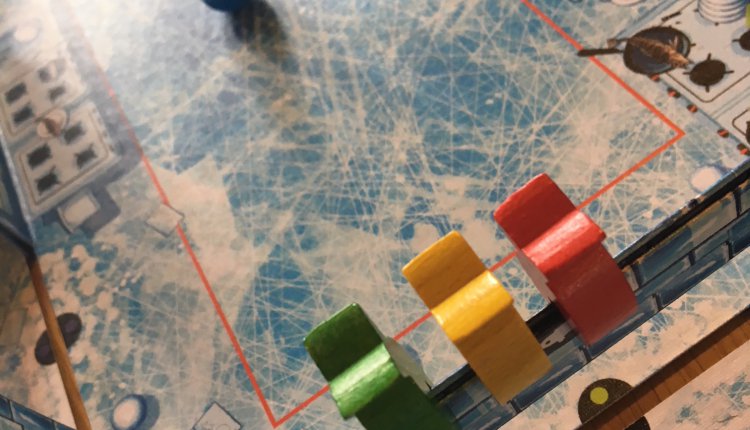 The turn structure couldn’t really be simpler, with each player taking it in turns to flick their penguin (which is actually a nicely weighted, plastic standee that will always right itself) towards the fish they want to collect. If a player passes through a doorway with a fish over it, they collect it and draw a card which indicates how many points it is worth — one, two or three. Instead of chasing fish, the player who is acting as hall monitor simply aims to smash into the other penguins, which revokes their hall pass but does not exclude them from continuing to catch fish — it simply ends the round once all hall passes are revoked. The round also ends once all fish are collected.

This cycle is repeated until each player has taken a turn as the hall monitor or, in the case of a two-player game, each cheeky penguin has two rounds in which to catch fish without being caught, before handing over. There are a few minor rules for dealing with situations like penguins stuck in doorways, for example, but they are all simple and straightforward enough. There’s also a special rule for any player who turns over two cards marked with a single point, allowing that player to ‘tap’ those cards and take a second flick (known as skating) although the points still count. 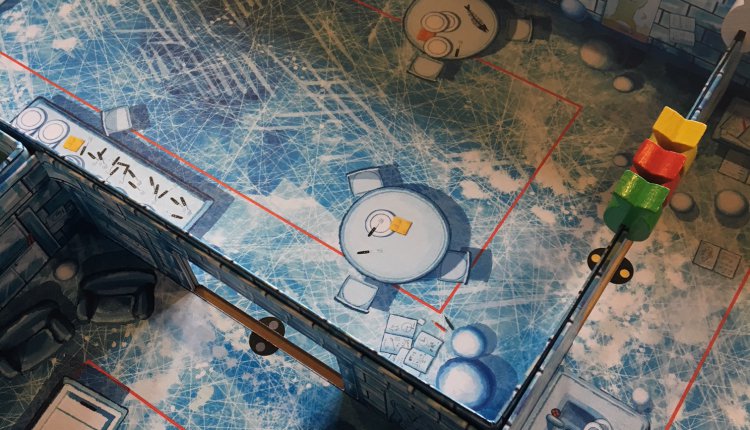 Clearly, Ice Cool is a very simple concept designed for children, but it’s still a lot of fun. Penguins, like pool balls, are capable of some very interesting trick shots. Flicking them from certain angles puts a spin on them and they can even jump over walls (although in doing so, they don’t catch any fish they pass over). This kind of dexterity shot can certainly lead to some high-level play among competitive youngsters and adults who want to keep them entertained.

I played the game primarily with a three-year-old and a trio of people in their mid thirties, all of whom seemed to enjoy themselves immensely, albeit for a reasonably brief period of time. Ice Cool looks fantastic and it offers very good value for money if you have someone to play it with, but perhaps what is most important about it is what it can offer to the next generation of gamers. It offers chaotic fun and laughter, but it also provides a simple, basic structure that teaches the basis of almost all other board games. I’m not qualified to say if it really is the best kids’ game of 2017, but it is most certainly a very enjoyable one. 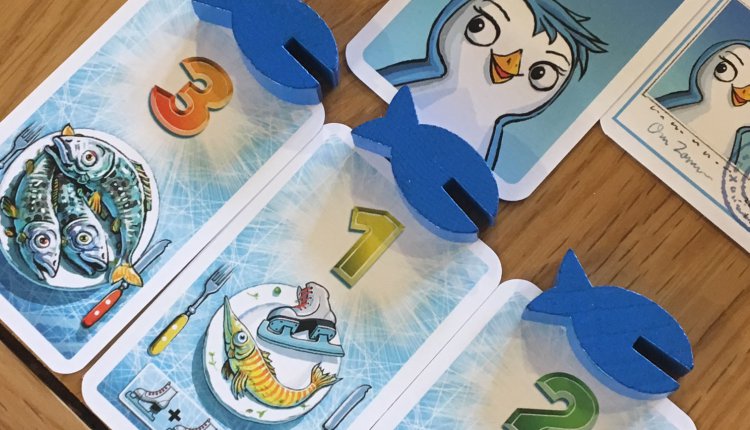 A copy of Ice Cool was provided for review purposes, and can be purchased from all good local games stores. For online purchases, please visit 365 Games

Takenoko — Build bamboo and eat it up