Board games are so vast, so luscious and so packed with interlocking mechanisms these days that I’m beginning to wonder whether making a game that is both simple and brilliant might not be the true sign of a masterful designer. Up step Antoine Bauza; already the designer of many great games, with 7 Wonders: Architects, we may just have the new go-to gateway game for modern hobbyists.

7 Wonders: Architects is obviously a spin off or at least a sibling title for 7 Wonders and 7 Wonders: Duel. Both of these prior titles are fantastic in their own right, but with their very classic art style, they are obviously designed for gamers of a certain age — late teens, probably. 7 Wonders: Architects rocks up with a very different  almost cartoonish — aesthetic, and this is a very telling nod to the lighter yet surprisingly engaging gameplay.

In 7 Wonders: Architects each player chooses one of seven wonders to represent — with the the Great Pyramid of Giza, the Hanging Gardens of Babylon and the Colossus of Rhodes being just a few examples. In choosing, the player takes their own tray of components — each containing five pieces of their wonder and a deck of cards inclusive of its own plastic holder. 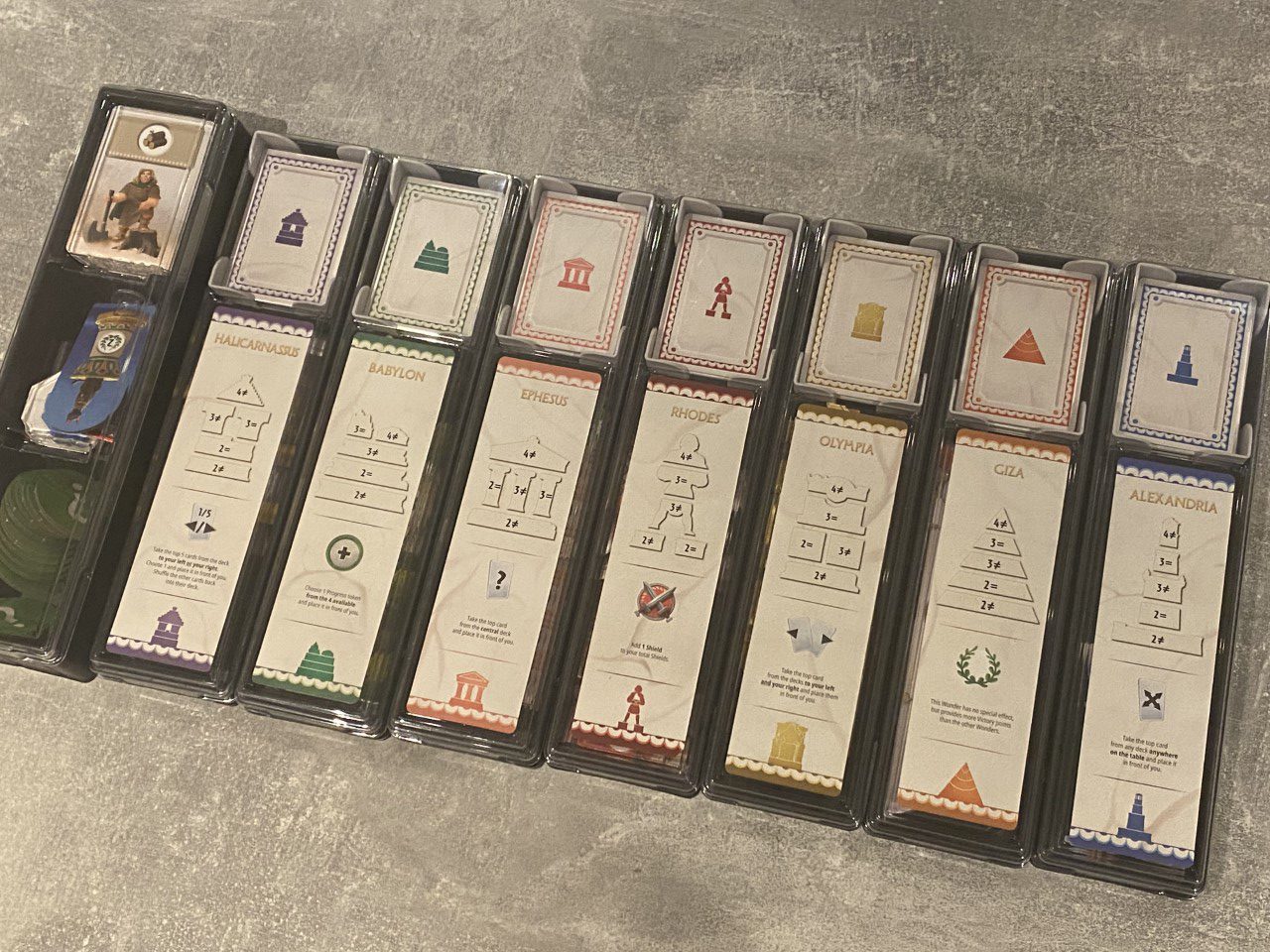 Setup is super, super simple. Just take your five wonder pieces and place them on the table with their “under construction” side facing up. Then, take your deck of cards, shuffle it, and place it back in the card holder face — then place it somewhere near to you, but also close to the centre of the table. A central deck of cards is also placed face down, as are supplies of science, war/peace and victory tokens. The only other piece is a cat monument, which begins in the middle of the table.

If setup is simple, turns are even simpler. The active player chooses to take one of three cards — either of those face up cards in the decks of the players to their left or right, or the mystery card on the top of the central deck. Cards include resources (including coins, which are wild), victory points, science cards and military cards — all of which are played right away, except for resources which may sometimes be held. 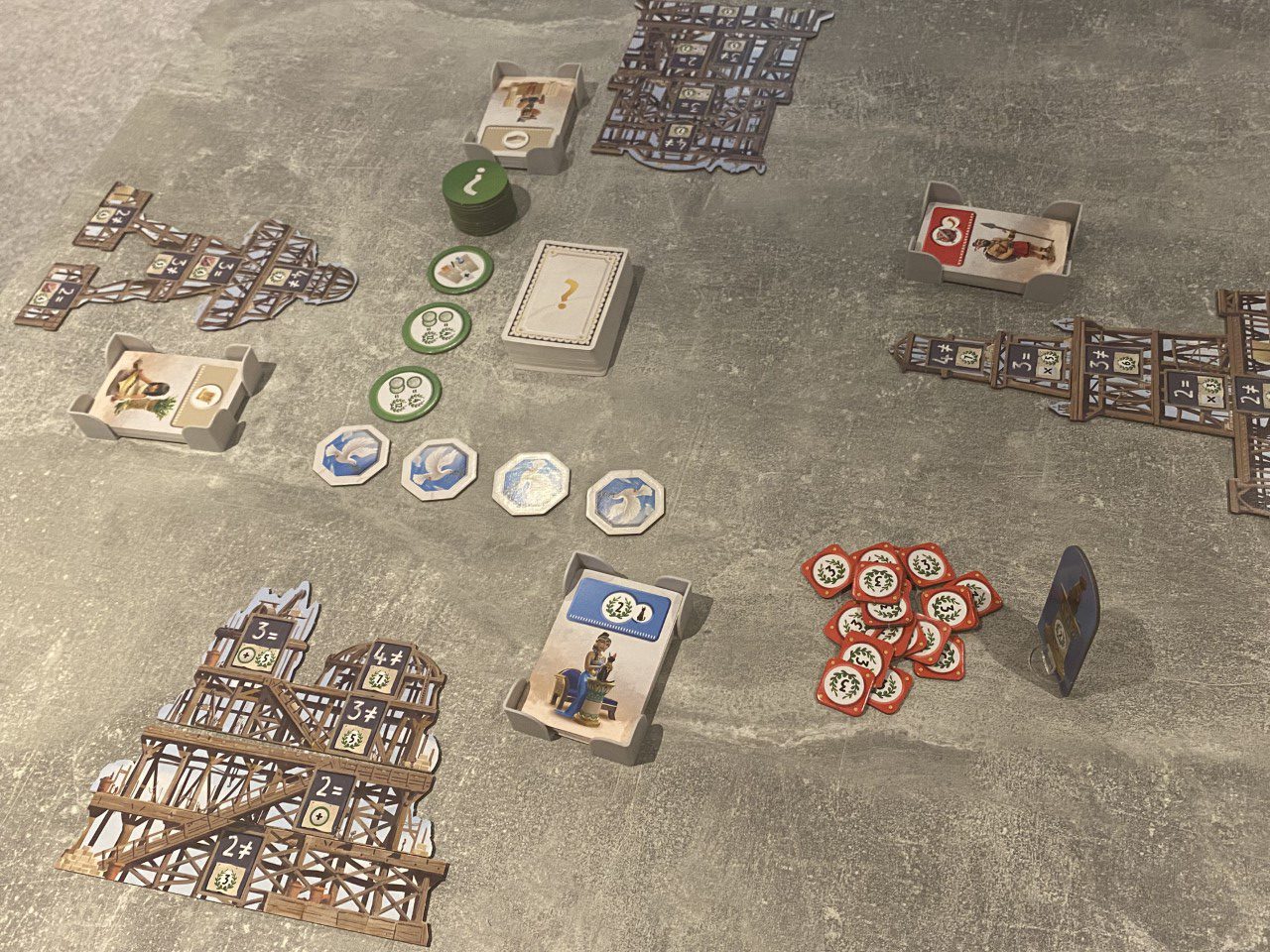 If a player takes a science, military or victory point card, it will be placed in front of them. Two identical science cards (or three different) results in a breakthrough — take a science token from a choice of three. Military cards add shields to your combat strength, and any horns showing will cause peace tokens to flip to their war side (more on this later.) Victory point tokens simply add endgame scoring — but if a cat icon is shown, that player will take the cat idol (from another player, if needed), which allows them to peak at the top card of the shared deck, and will score two points if held at game end.

As often as not, a player taking a resource card will be hoping to build the next level of their wonder. This is also super simple, and even my five year old can understand it. Each level simply requires players to spend either a set number of the same material (any) or a set number of materials that can be of any kind. If a player can build a level, then they must build a level — and this is done by spending your resource cards and flipping the wonder tile to its constructed side, which bestows whatever the benefit shown is (sometimes points, sometimes a unique additional bonus.) 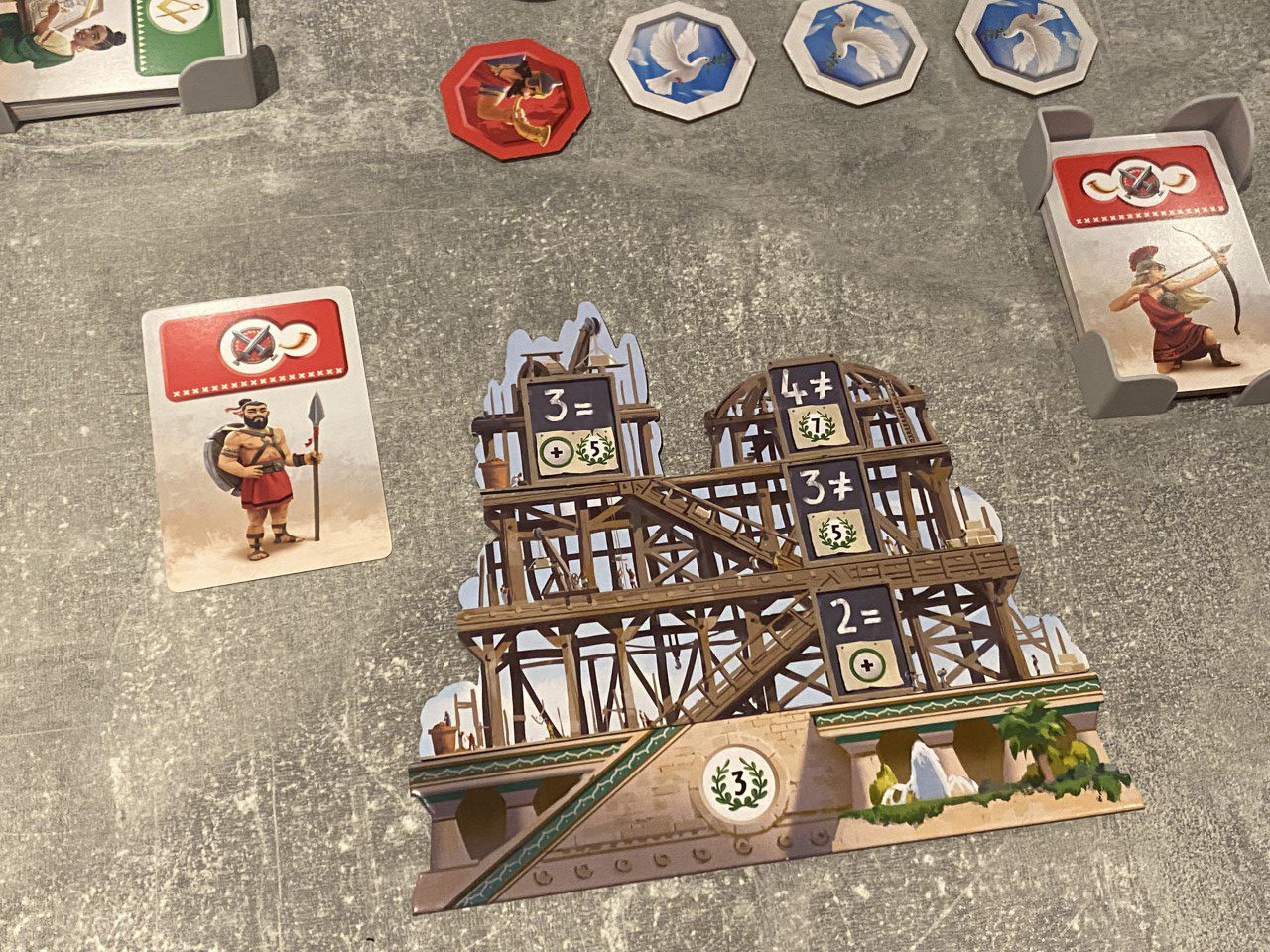 Coming back to science and military for a moment — science tokens award bonuses to players who obtain them, including points, or sometimes powerful effects like doubling the value of any gold coin cards you take later. War works differently, but is also straightforward once you’ve experienced it the first time. Simply put, if all the peace tokens flip to the war side, then each player fights both of their neighbours — taking a victory token for each neighbour who has fewer shields than them. They then discard any shield cards used in this conflict and reset the war tokens to their peace side. With three points per victory token, this can result in a bonus of up to six points.

When one player completes their wonder, the game end is triggered and ends immediately — without any other player being able to act further. Once this turn is over, end game points are scored across completed wonder tiles, science tokens, victories and any other sources. In most cases, 7 Wonders: Architects takes about twenty minutes per game, allowing five or ten more for teaching, high player counts or particularly inexperienced or young players.

Despite its very light weight and super simple structure, 7 Wonders: Architects is really good fun. It is one of those games that can really bring a family together, catching the imagination of younger players and harnessing their desire to create something, whilst also introducing simple historical concepts that everyone can chat and learn about. 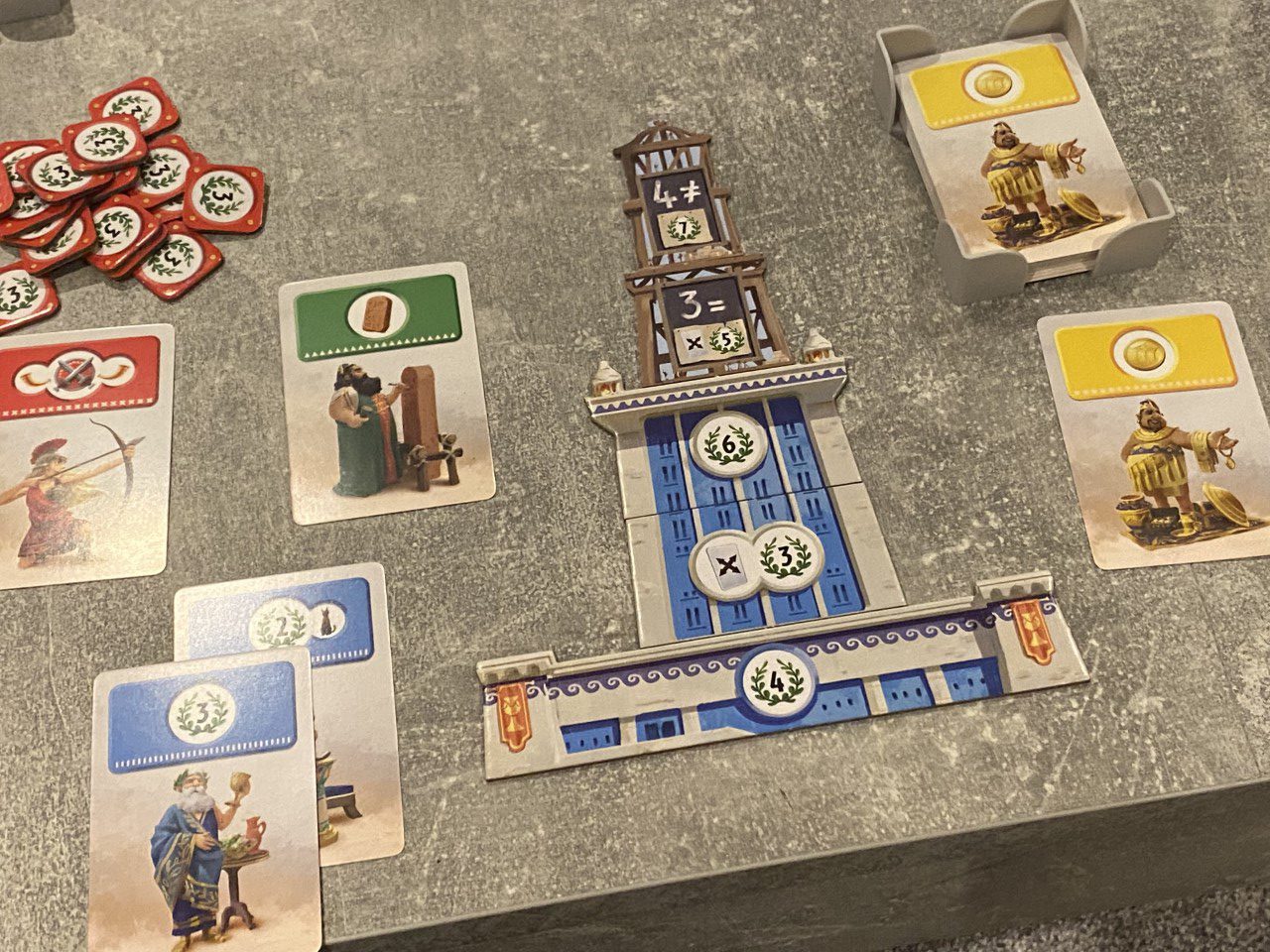 7 Wonders: Architects never outstays its welcome, either, and even if young players begin to get a bit twitchy or if someone isn’t really into it, the other players can usually assist and support them to the end without anyone feeling too stressed or as though they have wasted their time. That said, I didn’t actually find anyone who didn’t like the game once they got going with it, and it was a real hit with a few family members who don’t normally agree to play. With the holiday season approaching, 7 Wonders: Architects support for up to seven players is also a blessing, as personally I can’t tolerate party games, but often need to cater for five or six people.

If anything, the only thing I find a bit odd about 7 Wonders: Architects is the production — which is massively over the top. Yes, I love it, but having eight individual Gametrayz in the box is just unnecessary, and whilst it is visually appealing, I found it a bit wasteful and it makes 7 Wonders: Architects footprint about four times greater than it needs to be.

That aside, I think 7 Wonders: Architects is likely to be the gateway game to play this Christmas, and there is a chance it will edge the original game off the table in some situations around my house. I know for sure that it has two massive fans in my children, and I’m expecting a lot of people that I play with regularly to want to see it on the table as a warm up or cool down game. Whatever you want to use it for, there is no doubt that 7 Wonders: Architects is a hit.

You can find 7 Wonders: Architects on Amazon.

Love board games? Check out our list of the top board games we’ve reviewed.
a Rafflecopter giveaway

7 Wonders (Second Edition) is an old treasure, brought back to life with spit and…