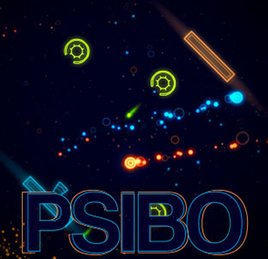 There’s simply so much going on at once; you firing multiple shots off at the target bricks, enemies firing back, a rival paddle flipping balls back at you, that it -at first glance- looks completely insane and unmanageable. Once you focus, however, on the objectives at hand, and that you have multiple lives and balls, it looks as though it turns into a really fluid hybrid of the previously mentioned classics.

What is especially interesting is the colour coding going on, with enemy bullets appearing to all be in one colour (green, from what can be seen) with the blue and red balls simply being the breakers in various states of ownership. Will this classifying of projectiles help players when they hit the joystick-zen of the classics? I don’t know. However, what I do is that at $5 the game is cheap, and so it’s well worth getting just to find out.

PSIBO is already out on the WII U, and will be launching on PC, Mac & Linux shortly after it is greenlit.