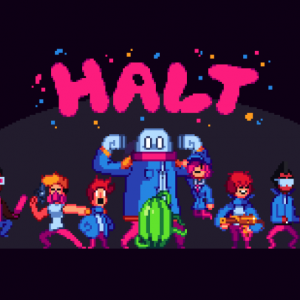 You play two members of the HALT department taking down a new gang and their cronies. Along the way you’ll be switching between, and combining different ammo and weapon types to better fight your foes.

Outside of the very appealing visuals the main pull to the game is the interesting ammo & weapon systems within. There seems to be fourteen icons displayed on the “Ammo” screen shown in the trailer (around 1:09) of which there are delivery methods; grenade, turret, missile, mine, but there’s definitely elemental abilities in there as well, freezing a boss is shown later in the clip, and napalm drips fire down onto enemies from above in another moment.  What will be interesting to see is how this ties into the 30+ upgrades that the developers mention in the features list.

And of course, the promise of a hub world is always welcome, there’s little more important structurally in certain games than an interactive and involving hub from which to launch your missions – when done well a hub can make for an interesting meta level as well… but, let’s not dwell too long on that.

I suppose the final note is that the game also mentions you have stats to improve, and also an inventory system. These certainly set the game up to be a lot more than promised… if those elements don’t get in the way of the core gameplay; and example of this would be that we see enemies taking multiple hits to falter, if this is tied to a damage statistic (and/or appropriate ammo/elemental damage) then some players could lead themselves into a merry trap by missing pick-ups or focusing incorrectly.

So, I think it’s definitely one worth watching develop.

HALT hasn’t yet got a release date, however it has been confimed that it will launch for Windows PC & Mac when it does launch.