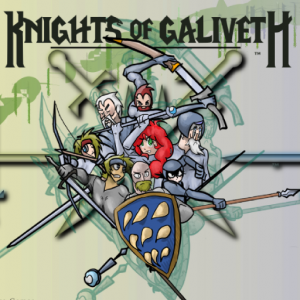 It’s a platformer adventure game but with eight interchangeable characters, all with their own stats and skills. The whole thing is further dominated by permadeath and there are also several different endings depending on how many of the Knights of Galiveth survive the game.

The whole eight characters idea is absolutely brilliant, as a matter of fact there’s a lot of great ideas in the game, it’s just that a lot of the rest of the game is distilled to it’s simplest form. The idea of having a carefully designed dungeon to survive through, with certain areas and secrets only accessible if you use the right Knight, of having enemies which are particularly weak to certain attack types, and of having permadeath… It’s a really, really promising mix.

Unfortunately in it’s current state a lot of this great potential is wasted. The artwork needs an overhaul, with backgrounds and levels a little bit too angular, and I’m sure an artist could do wonders with the character icons (in the least flipping one of the bandana sibling’s partings to make them move visibly different for the colourblind). Attack animations and character models are near perfect – I really enjoy the Megaman style jumps. The view probably needs to be moved further in, or the movement speed cranked up as well. Finally, there should probably be points which immediately call all fellow knights forward, so that you don’t need to run through the same section eight times.

With all of that done the game could really be something special. I mean, imagine a boss fight where a shield-bearer (although I notice there’s only one) could be placed to guard a player controlled ranged character from attack… or imagine if the developer somehow got the characters to auto attack on proximity, and you could entrap a boss. That would be totally unconventional and bloody brilliant. But, even without that (sorry, I got carried away) the game could be fantastic if only with some tweaking and an art redress.

Knights of Galiveth is nowhere near completion, and as I said above that’s a good thing. The game is currently listed for a Windows PC launch although as development shifts so does engine, and ultimately we may see the finished, final product on more platforms.